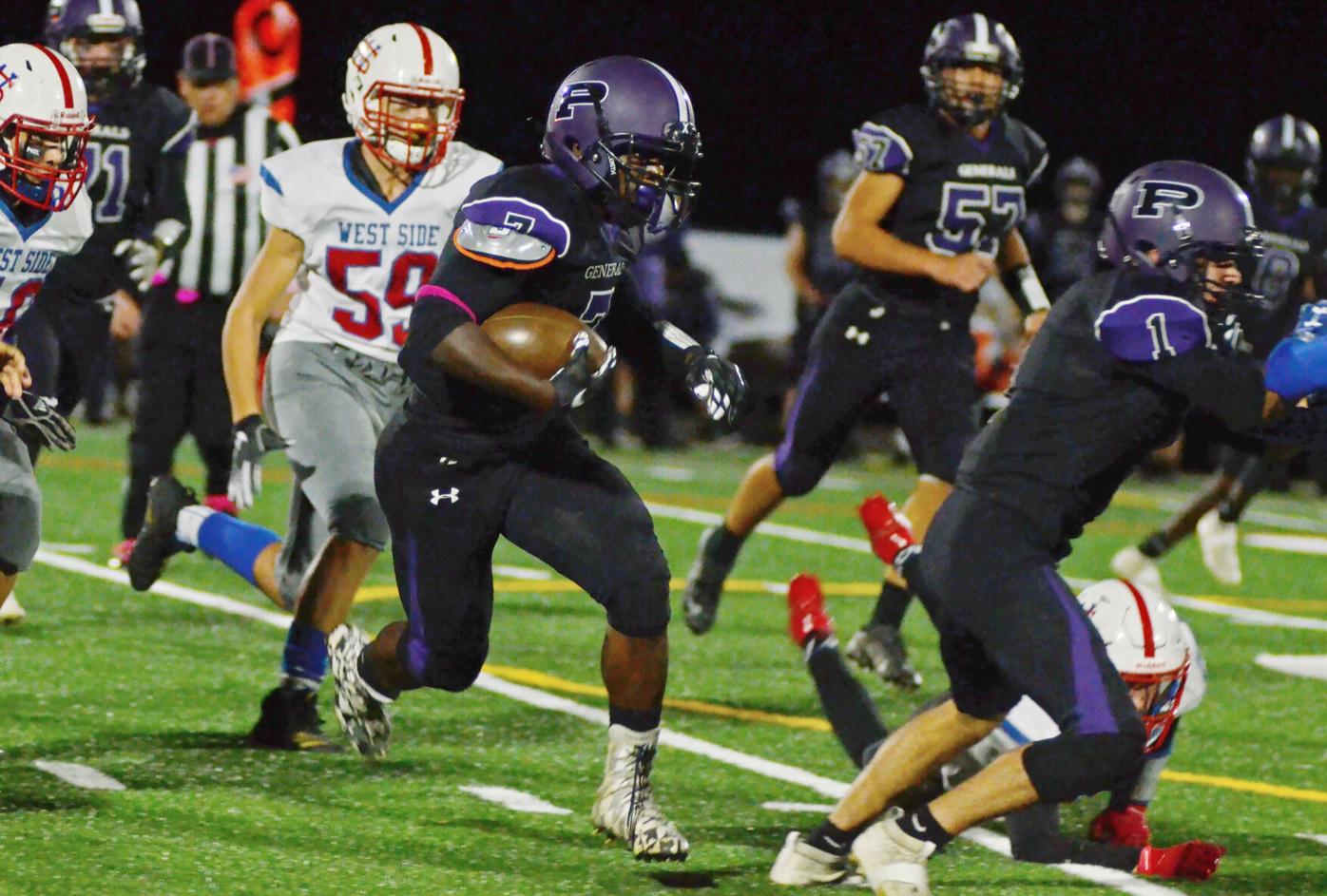 Pittsfield running back Emmanuel Nda made it official this week, he’s going to play Division I-FBS football. Nda signed his National Letter of Intent to play at Army. 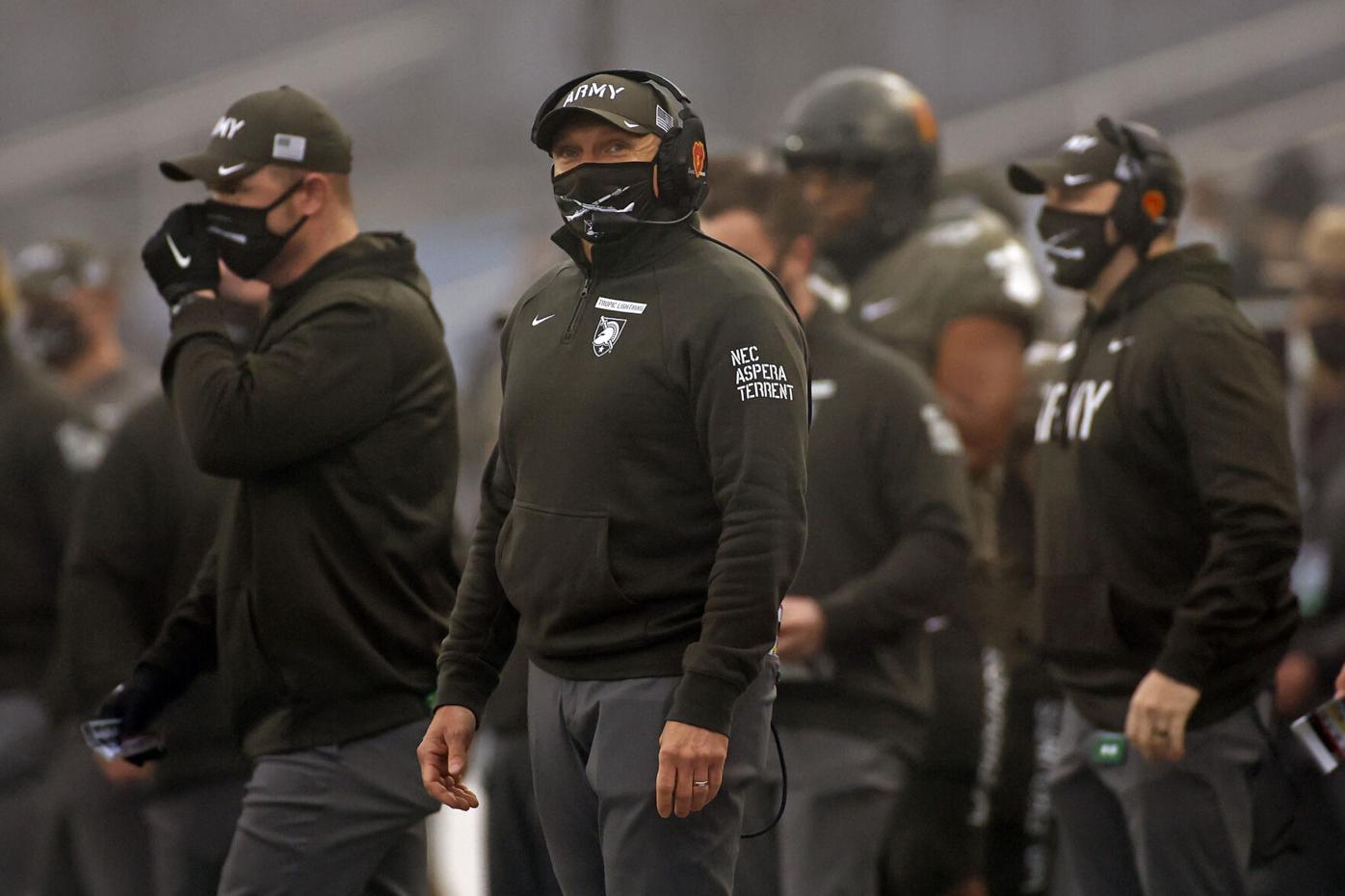 ADAM HUNGER — THE ASSOCIATED PRESS Army head football coach Jeff Monken, center, won’t comment on new football recruits until they arrive at West Point in the summer. But Monken did say that he is confident that the group, which includes Pittsfield’s Emmanuel Nda, will be outstanding Cadets.

Pittsfield running back Emmanuel Nda made it official this week, he’s going to play Division I-FBS football. Nda signed his National Letter of Intent to play at Army.

ADAM HUNGER — THE ASSOCIATED PRESS Army head football coach Jeff Monken, center, won’t comment on new football recruits until they arrive at West Point in the summer. But Monken did say that he is confident that the group, which includes Pittsfield’s Emmanuel Nda, will be outstanding Cadets.

Emmanuel Nda has known where he was going to play college football since the summer. But when the rising senior at Pittsfield High School signed his National Letter of Intent to play football at the U.S. Military Academy, that made it all feel different.

“To be honest, it was really reassuring to definitely commit fully to a program where the premise of it is bigger than myself,” Nda said. “I’m glad that I’m a part of it. It was more of a reassuring feeling, due to me committing to the brotherhood. The best brotherhood in the nation.”

Nda had announced his verbal commitment to head coach Jeff Monken’s team back in July.

Army is currently 8-2, having just knocked off archrival Navy 15-0 on Saturday. The Black Knights will play Air Force at home on Saturday, and the winner will receive the Commander-in-Chief’s Trophy, for winning the series among the three service academies. Army has won the Commander-in-Chief’s Trophy eight times, the most recent wins came back-to-back in 2017 and 2018.

In a statement from the school, Monken said that while he could not comment on Nda or other incoming recruits, the coach likes what he sees.

“I am excited about the future of Army Football. With [Wednesday] being the start of the early signing period, we have secured commitments from several outstanding young men,” he said. “Unlike traditional colleges, we cannot publicize these commitments until after their arrival at West Point this summer, but we are confident that we have recruited a group of young men who will be outstanding Cadets, leaders of character to serve our nation, and football players who will help carry on the winning tradition of Army Football.”

Nda is the latest Division I-FBS athlete from Berkshire County. Williamstown’s Jake Benzinger, who played at Mount Greylock, wrapped up his college career at Wake Forest last fall. Jake Hescock of Pittsfield, who went to Salisbury School, is currently playing at Central Florida.

Brian Jezewski will begin his 13th season at the PHS helm if there is a Fall II football season in March. He has had several players play at the Division III level. Nda is the first General who has a chance to someday be a real general.

“I’m extremely proud of him. From a young man who wasn’t sure he wanted to play football, to one of the better players in Western Mass., if not the state,” Jezewski said, “he’s a 17-year old role model for a lot of the youth in this community.

The rising senior was named football’s Offensive Player of the Year when The Berkshire Eagle unveiled it’s 2019-20 All Stars. He ran for 1,432 yards and scored 17 touchdowns. He gained 259 yards or more three different times, and averaged 179 yards and two touchdowns per game.

Nda, listed at 5-foot-9, 172 pounds, has also been a track and field standout for the Generals.

In 2019, he finished third in the 100 meters at the Central-Western Mass. Division I meet and ran a leg on the second-place 4-by-100 relay team. His time of 11.26 seconds was the fastest by a Western Mass. runner in the final, and he ran a 11.10 in the preliminaries.

The plan, according to Nda, is to redshirt in the fall at the U.S. Military Academy Prep School, which is on the West Point campus. Jezewski said he wouldn’t mind if Nda then had a freshman redshirt season to get bigger, stronger and more prepared for the rigors of Division I-FBS football.

The application process usually includes a nomination by one of Massachusetts’ two U.S. senators. Nda said that he’ll get the nomination from Sen. Edward Markey’s office after the redshirt season at U.S. Army Prep.