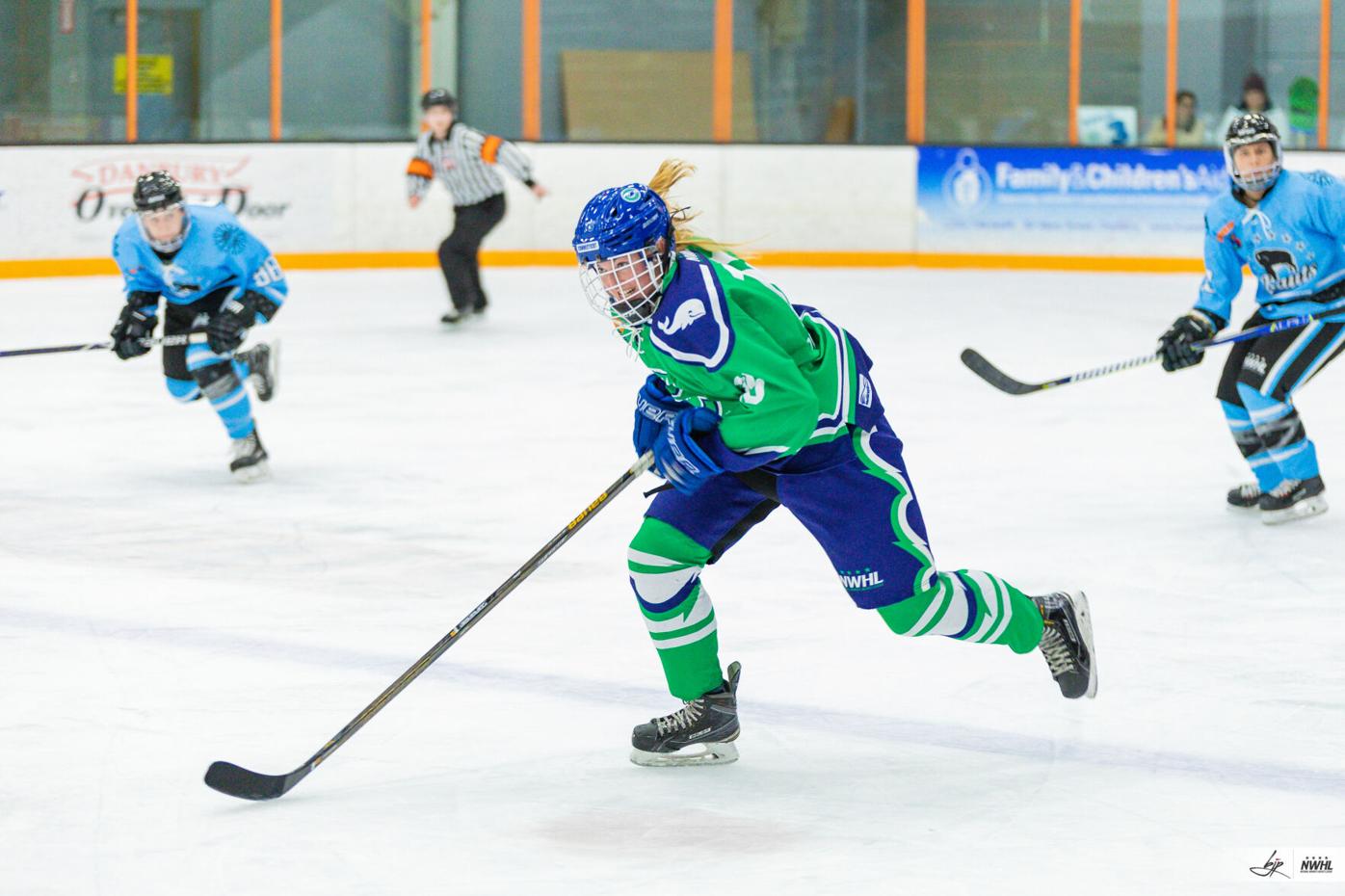 Connecticut Whale defender Hanna Beattie, a former Williams College player, will head with her teammates to the NWHL bubble in Lake Placid this season. 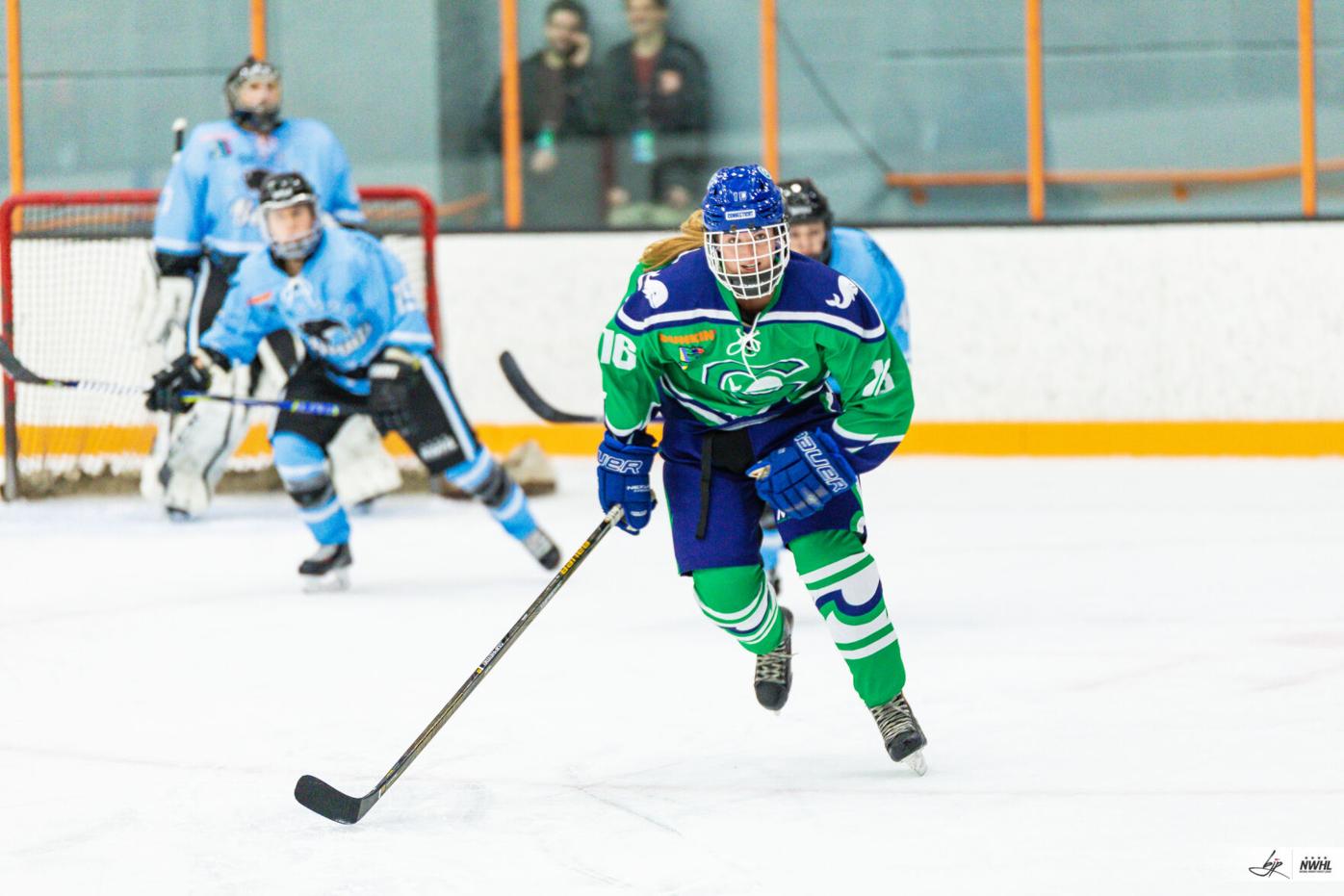 Beattie was named NESCAC rookie of the year in 2014 after tallying 14 goals and 18 assists for the Ephs. 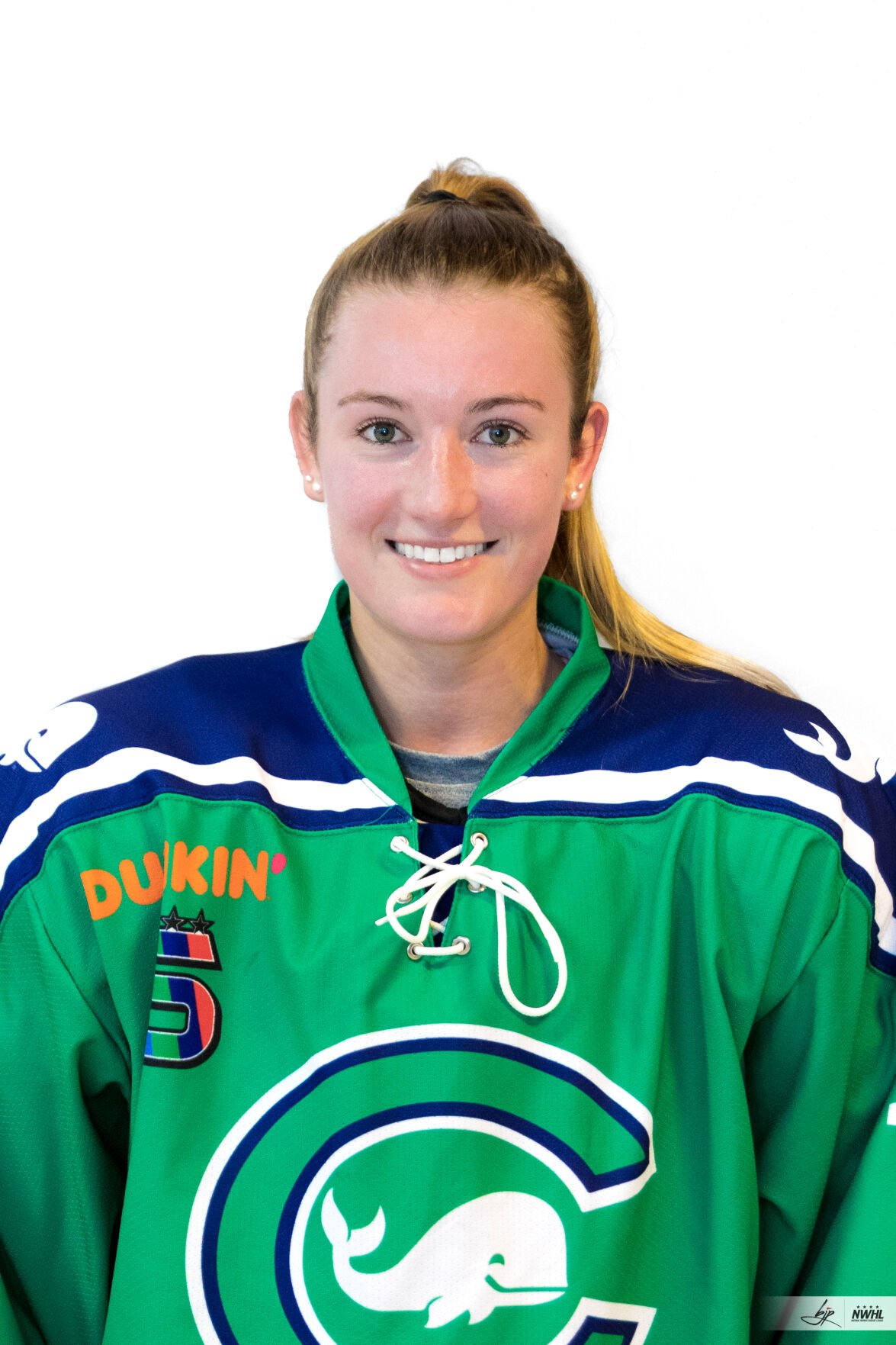 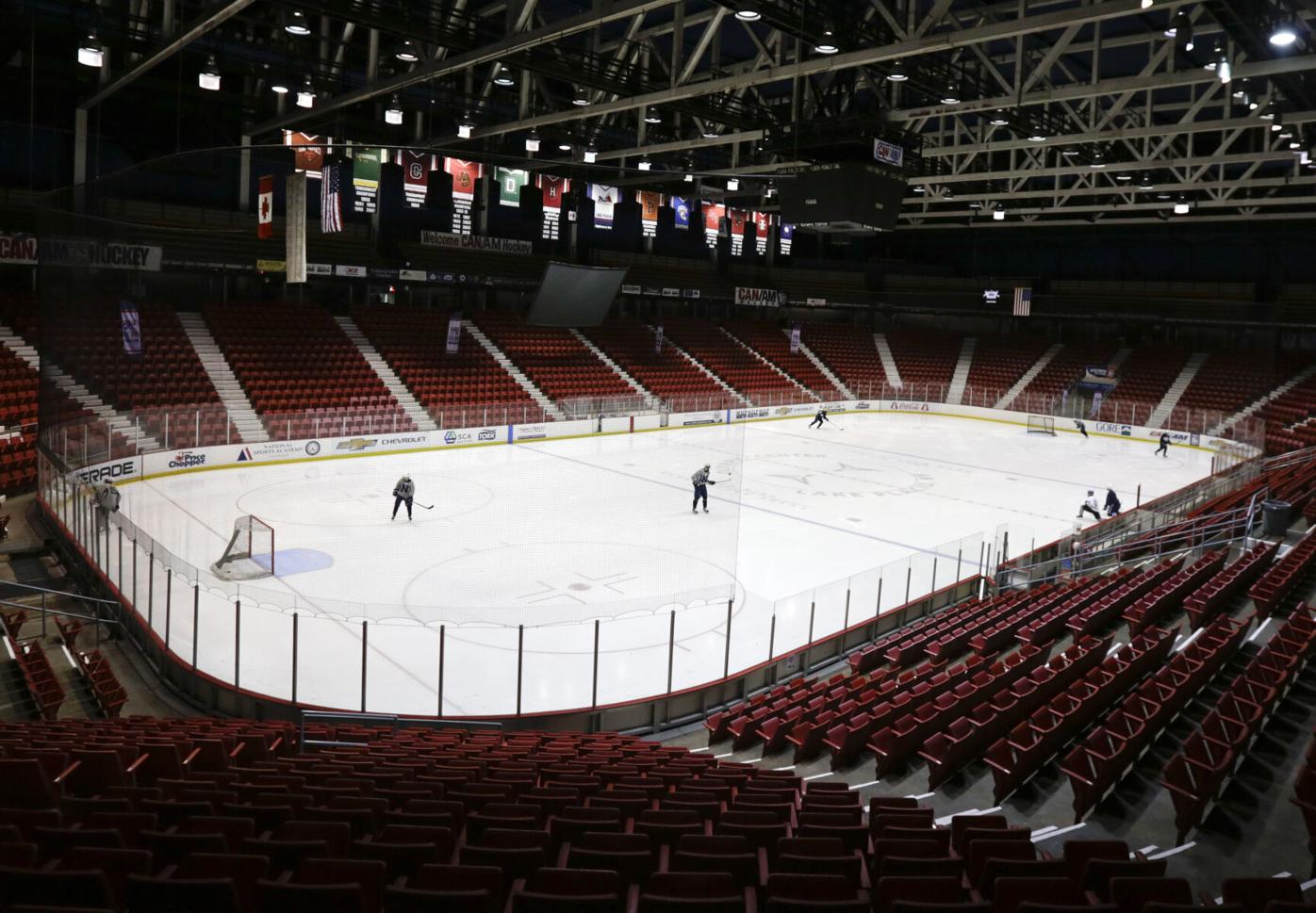 The Herb Brooks Arena, the site of the "Miracle on Ice," inside the Olympic Center in Lake Placid, N.Y. will serve as home ice for the National Women's Hockey League bubble this winter.

A Williams College graduate has been playing at the highest level of women’s professional ice hockey for the past three seasons. And the pandemic isn’t slowing her down.

“I am,” she said. “I’m getting ready to start my fourth season.”

Beattie plays defense for the Connecticut Whale of the National Women’s Hockey League. The Connecticut team is one of the so-called “Original Four,” that has grown since 2015 to six teams. Connecticut, the Boston Pride, Buffalo Beauts and New York Metropolitan Riveters are the first four teams in the league. They have since been joined by the Minnesota Whitecaps and the newest team, the Toronto Six.

The six teams will be heading to upstate New York late next month to play a shortened season inside the bubble at Lake Placid.

“I am. That’s the plan,” said Beattie, when asked by The Eagle if she’ll be heading north. “I’m personally very excited. I think the league is doing a good job in preparation. We’re getting tested every week. Once we’re there, we’ll be tested even more. It’s a short amount of time in the grand scheme of things, but since we all have day jobs, it’s the best way to make it happen.

“If the cases around the country can not skyrocket before then, I’m hopeful it will happen.”

The NWHL will hold its tournament/season from Jan. 23 until Feb. 5, at Herb Brooks Arena. That’s the same rink where the United States won the 1980 men’s hockey gold medal at the Winter Olympics.

It was announced on Tuesday that the Isobel Cup semifinals and final will be televised on NBCSN. The semifinal games will be aired on Thursday, Feb. 4, at 5:30 and 8 p.m., while the championship game will air on Friday, Feb. 5, at 7 p.m. Coverage will also stream on NBCSports.com and the NBC Sports App.

“Never before has women’s professional hockey had the opportunity to reach so many people on American television in the United States,” NWHL commissioner, and longtime Pittsfield Suns co-owner Tyler Tumminia said in a statement from NBC. “As we have seen with the WNBA and NWSL [National Women’s Soccer League] this year, when women’s major league sports are given a strong showcase, viewership is increased and countless new fans connect with teams and players.”

Teams are slated to arrive either Jan. 21 or 22. After testing, the six teams will play five games in a round-robin tournament. The six teams will then eliminate two in order to have a final four to play for the Isobel Cup, given to the NWHL champion.

For the record, the Isobel Cup is named for the daughter of Lord Frederick Arthur Stanley, who is the namesake of the Stanley Cup.

“At a time of hyper-growth for girls’ and women’s hockey, we see this season as a celebration of the sport,” Tumminia said in a statement. “This will be a historic moment as the hallowed arena that was the site of the “Miracle on Ice” in 1980 hosts its first women’s professional championship. It is a proud moment for the NWHL, the players, and all hockey fans.”

Beattie graduated from Williams in 2017, and parlayed her degree into a position with the Octagon sports marketing firm in New York City.

Beattie was the NESCAC Rookie of the Year in 2013-14. That was when the Ephs, seeded third in the NESCAC Tournament, won three games to claim their first-ever NESCAC Tournament title. Williams had been the third seed in the tournament, but hosted the semifinals and final as the highest remaining seed after No. 1 Middlebury and No. 2 Amherst had both lost in the quarterfinals.

The first-year had 14 goals and 18 assists, good for No. 2 on the team and No. 2 in NESCAC behind Ephs teammate Cristina Bravi.

Beattie was a first-team All-NESCAC selection in her first two seasons at Williams.

“I remember pulling off my jersey the last game of my senior year, at Connecticut College, and I definitely felt that was it,” she said. “While it’s not an Ephs’ jersey, it’s still fun to be playing.”

In three seasons with the Whale, she has 3 goals and four assists. Her best season came in 2019-20, when Beattie scored 3 goals and had 3 assists, along with 18 penalty minutes. Beattie also scored two goals in a playoff game against Buffalo.

There are a number of former Division III hockey players on the Whale roster. The list includes forward Elena Gualtieri, who played for two years against Beattie in NESCAC. Gualtieri’s first two years at Connecticut College were Beattie’s last two years at Williams. Gualtieri was a second-team, All-NESCAC pick in 2018.

Connecticut is, however, the only one of the NWHL’s Original Four not to have won an Isobel Cup. Even Minnesota, the first expansion team, has lifted the trophy.

The league is different than when Beattie first started playing. She still has her day job at Octagon and still trains at night. When the NWHL returns to home rinks, the Whale will move to Danbury, Conn., Arena for home games.

The league itself has adjusted in each of its previous seasons, and the former Ephs defender likes where things have gone.

“It’s changed quite a bit, not only with our team structure and coaching, but the way we get paid has changed. There’s more guaranteed money. I feel like the level of play has increased,” she said. “We’ve played more games. The Whale has changed rinks a few times. A lot of differences.

“I definitely think it’s in a forward motion and it’s getting better every year.”

Colton Orr is the head coach of the Whale. Orr signed with the Boston Bruins as an undrafted free agent in 2003. He scored 12 goals and had 12 assists in 477 games with the Bruins, the New York Rangers and the Toronto Maple Leafs.

It has been a bit of a slog for the players and teams in the NWHL. First, there was a rival in the Canadian Women’s Hockey League. Now there is a Professional Women’s Hockey Players Association that, according to its website, is working to create a “single, viable professional women’s ice hockey league.”

For her part, Beattie said she is more confident in the future of the NWHL in large measure, because of Tumminia taking over as interim commissioner.

“She will now be working toward getting private ownership for the remaining four teams, the Whale, the Beauts, the Riveters and the Whitecaps, so I think she’ll be playing a really important role there,” Beattie said. “I think the league will benefit from having another new face, with new ideas coming from Tyler.”