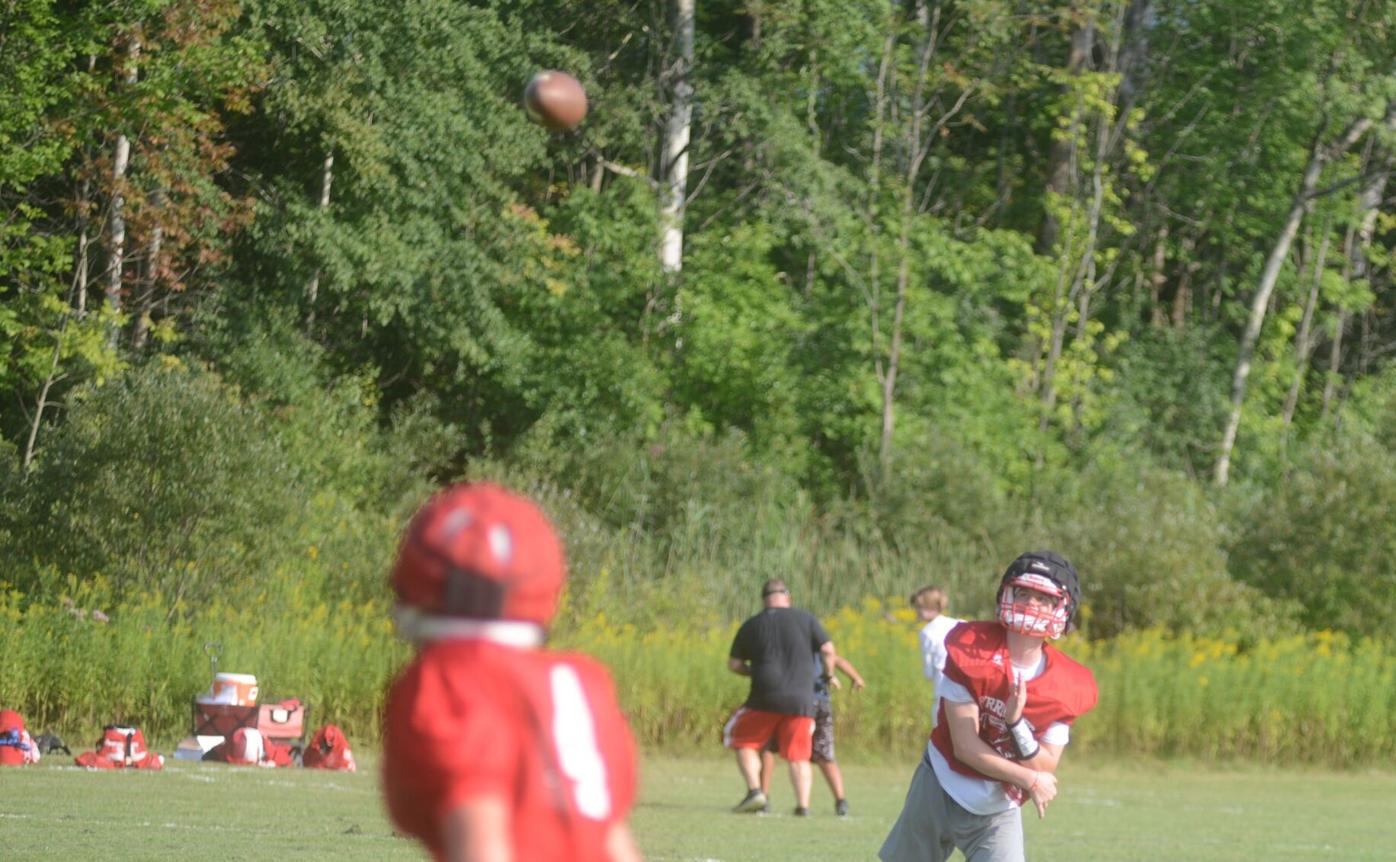 Hoosac Valley quarterback Carson Meczywor tosses the ball to a receiver rushing down the field during a practice at the high school in Cheshire. 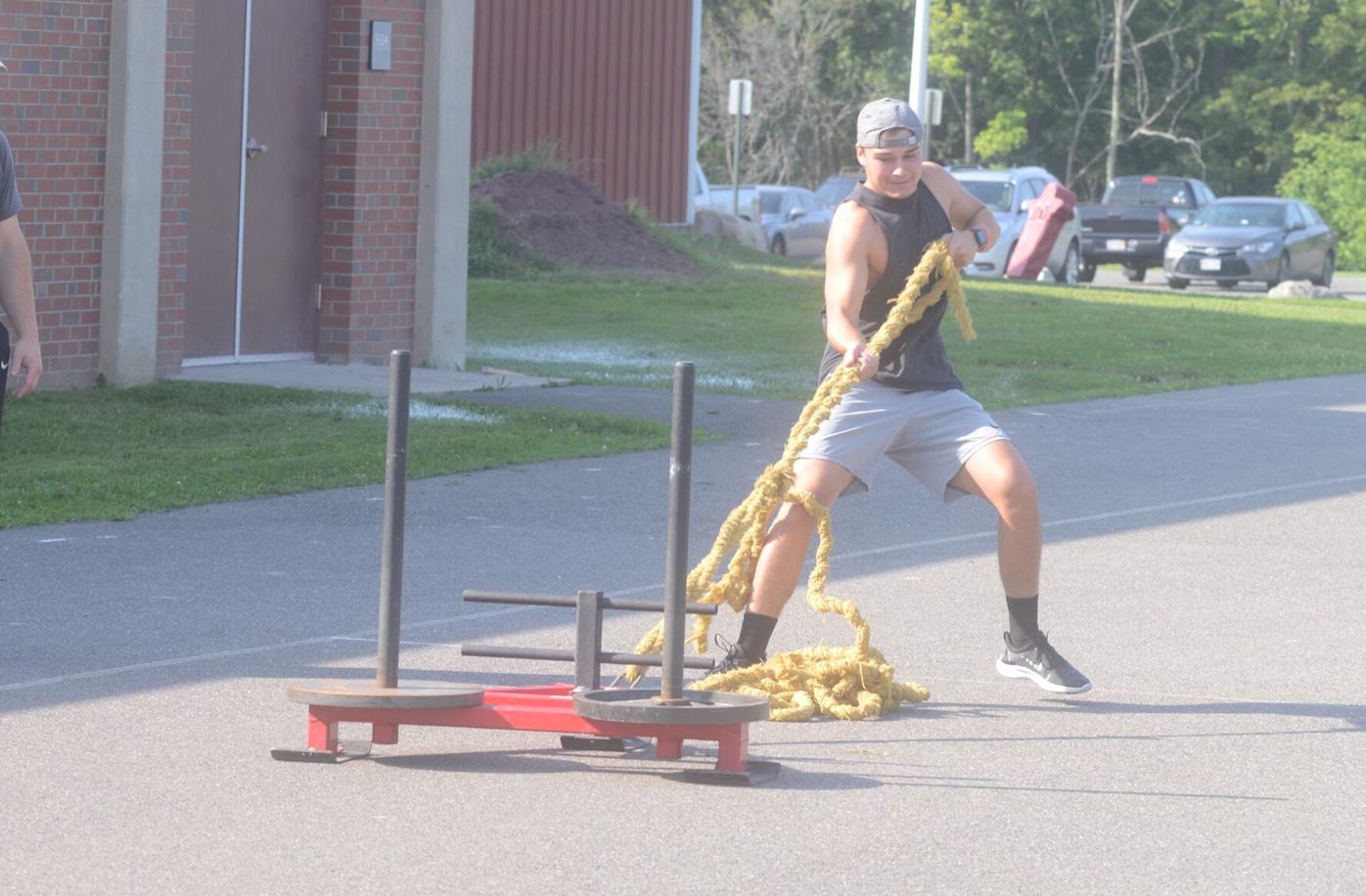 Hoosac Valley's Aaron Bush pulls a sled during a practice last week in Cheshire. Bush and quarterback Carson Meczywor competed for the first locker during practice.

CHESHIRE — Plenty has changed since the Fall II football season, despite being just four months ago.

In fact, Hoosac Valley’s practice last Wednesday would’ve looked much different. Coach Mike Bostwick, before heading up to the practice field with his team, initiated one of the first challenges of the preseason.

Carson Meczywor and Aaron Bush, two of the team’s captains, raced to see who could push a sled before flipping a tire three times the fastest. When the dust settled, Meczywor officially earned the first locker inside the locker room.

Not only did the Fall II season lack the time to participate in these team-bonding exercises, but players couldn’t even use locker rooms as part of the COVID-19 safety guidelines.

“Traditionally, we have done these competitions for the last few years,” Meczywor said. “We couldn’t do that stuff [in the spring] and once the [Fall II] season started, it was just football and we didn’t have a lot of time to do the social stuff.”

The Hurricanes were tripped up by Wahconah in the first game of the Fall II season but then won against Mount Greylock, Drury and Monument Mountain, before ending the year with a loss to Lee.

In the trenches, Aiden Astorino, Logan Leja and Aidan Koczela each graduated and Hoosac Valley will need to piece together the unit. However, the team rostered 11 juniors in the spring with six of them listed as linemen.

Additionally, skill position players like Meczywor at quarterback and Bush at running back were key players to Hoosac Valley’s eight-game winning streak back in 2019.

“I had captains like Nolan [Roberts] and Liam [Feeley] to look up to since I was a freshman,” Bush said. “Those guys were great and I think all of us are working to live up to those strong seasons.”

For both Bostwick and Meczywor, the secret to success is decoded as a team.

“We need to do everything as a team, play as one and stay as one,” Meczywor said.

“There is a strong pool of talent with these kids,” added Bostwick, the former offensive coordinator who took over head coaching duties last year, “but coming together and playing for each other — which is really my biggest emphasis this year — is what will lead to success.”

Hoosac’s three-game winning streak in the spring saw the Hurricanes outscore their competition 110-8. Shaun Kastner, now a senior who will join Bush and Meczywor in the backfield, scored two touchdowns during the stretch. Additionally, Bush found the end zone four times in three games. 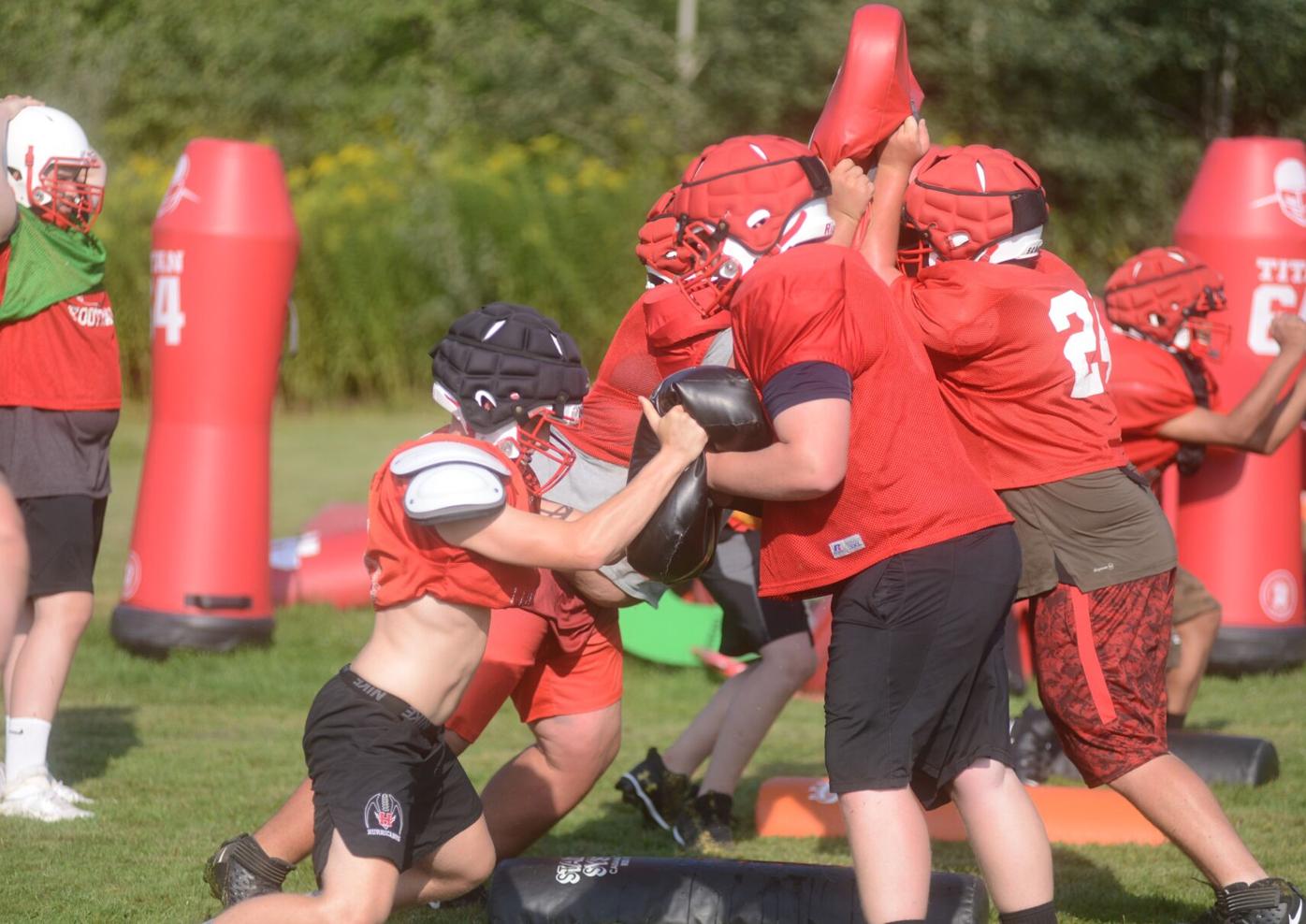 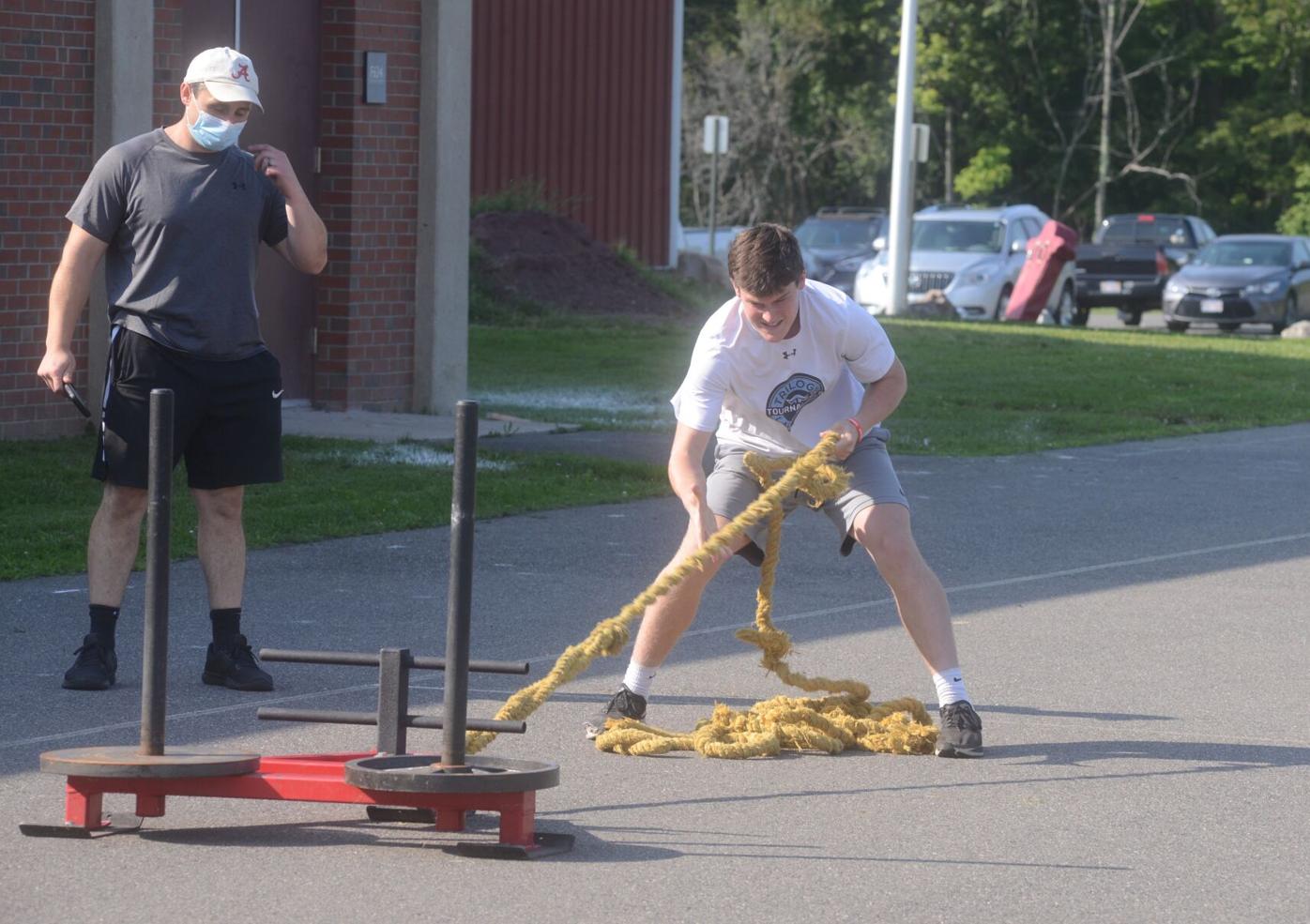 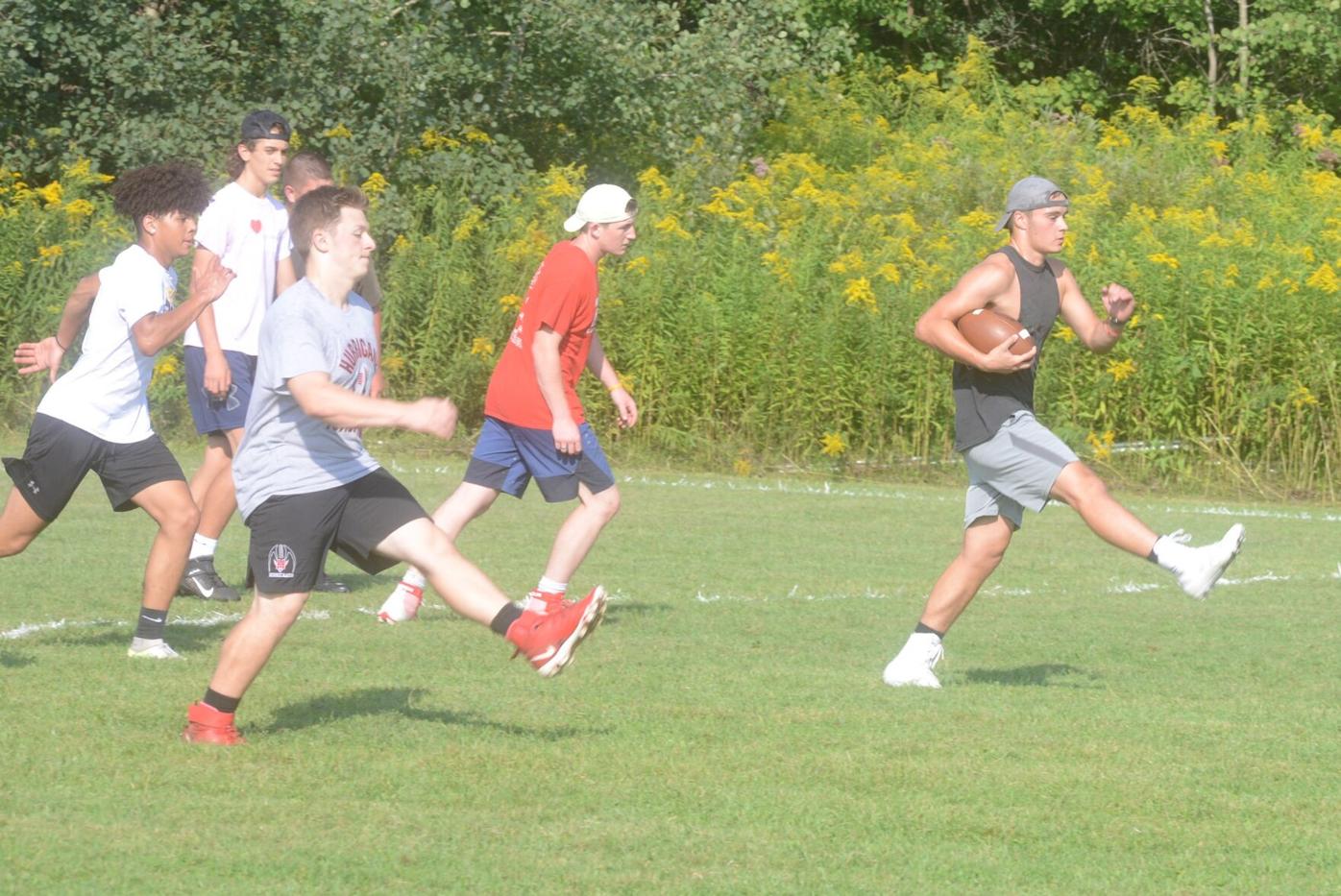 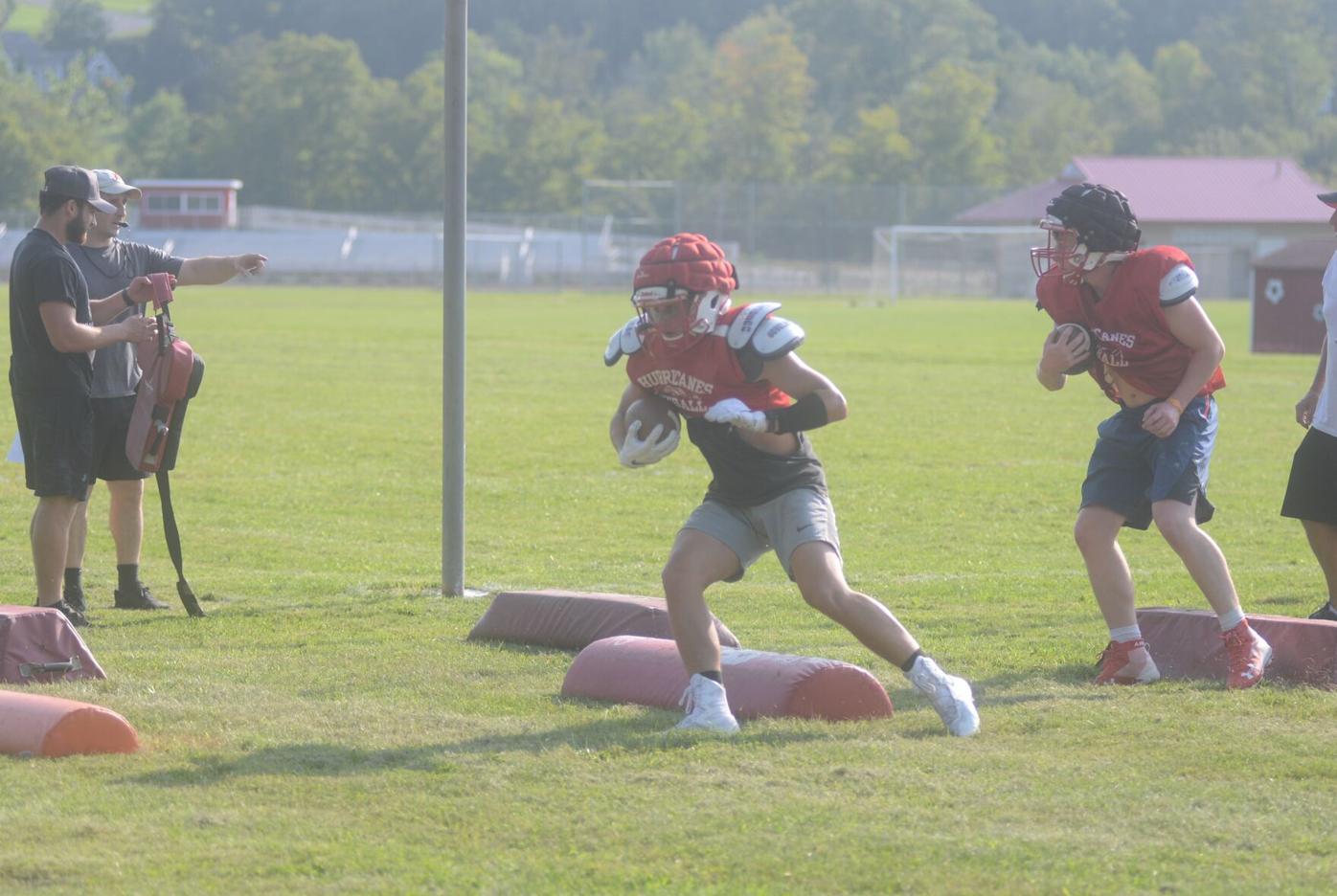 While the rushing attack is dangerous, Meczywor and the air attack might have found its secret sauce. Kobe Valois captured touchdown receptions in back-to-back weeks and Caleb Harrington caught a touchdown against Drury. Both receiving options were juniors last season.

“The spring gave me insight to what [the team] could do and what I could put on the plate to start the fall season,” Bostwick said. “It’s been nice and I am envious of states with spring ball, there are so many requirements from the team perspective of football and you have to get everyone on the same page.”

The Hurricanes are heavy on seniors, but some underclassmen made the most of limited time on the field. Freshman Griffin Mucci had a three-touchdown day as an eighth-grader in the spring, returning an interception for six and scoring from 54 and 56 yards out against Mount Greylock.

Snaps at running back may be hard to come by, but Mucci may work onto the field defensively next to Kastner at linebacker.

Hoosac Valley had a scrimmage slated against Ludlow on Aug. 28 and will start the season on Sept. 10 against Northampton. The team will remain in Cheshire the following week, hosting Taconic on Sept. 17.

“It’s a shorter turnaround and we have a lot of the same guys,” Bush said of the transition from spring to fall, “we all know what we want to accomplish.”