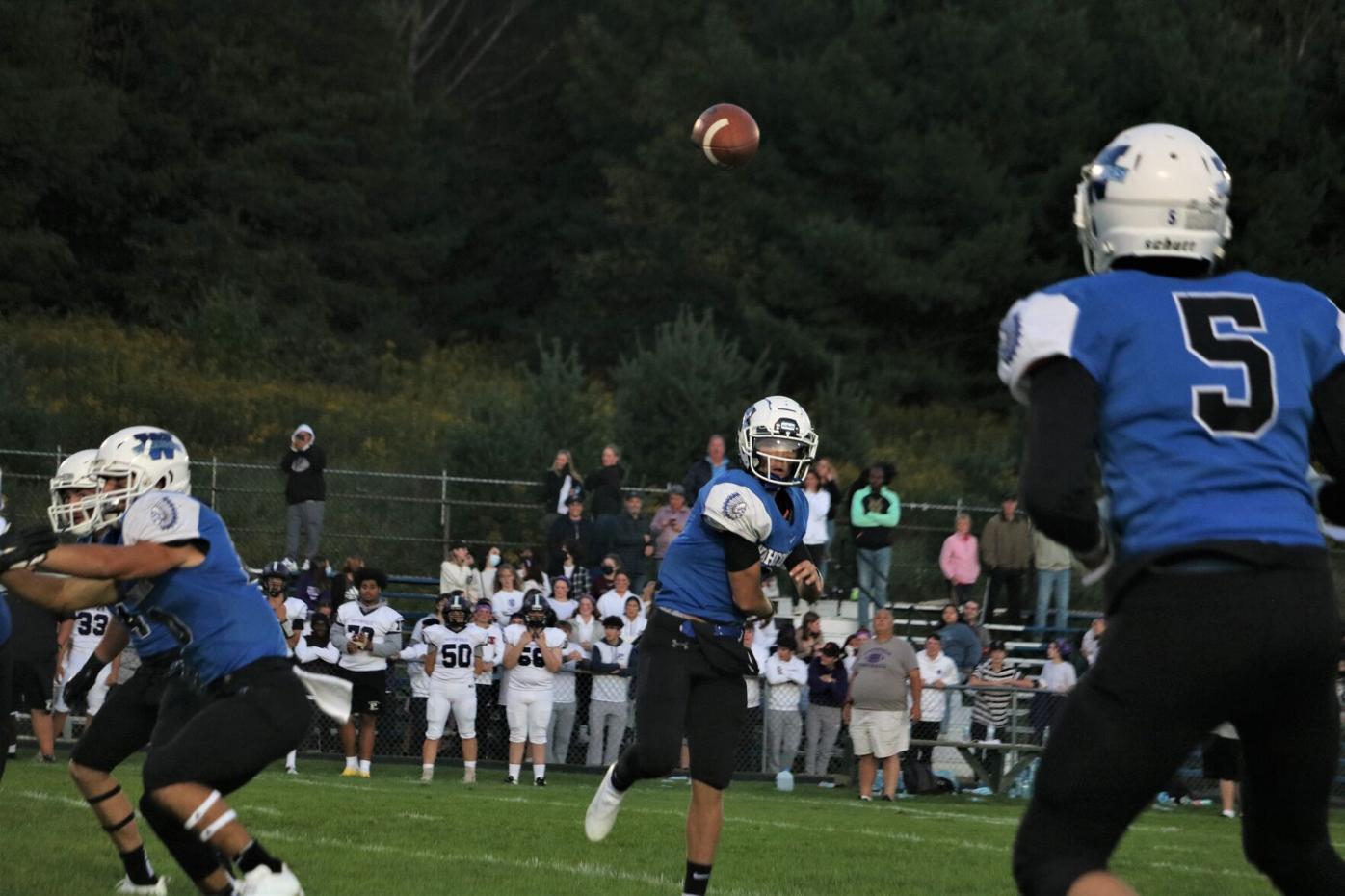 Quarterback Ryan Scott and the Warriors will look to remain undefeated through the season's first quarter. Wahconah hosts Lee on Friday in The Eagle's Game of the Week. 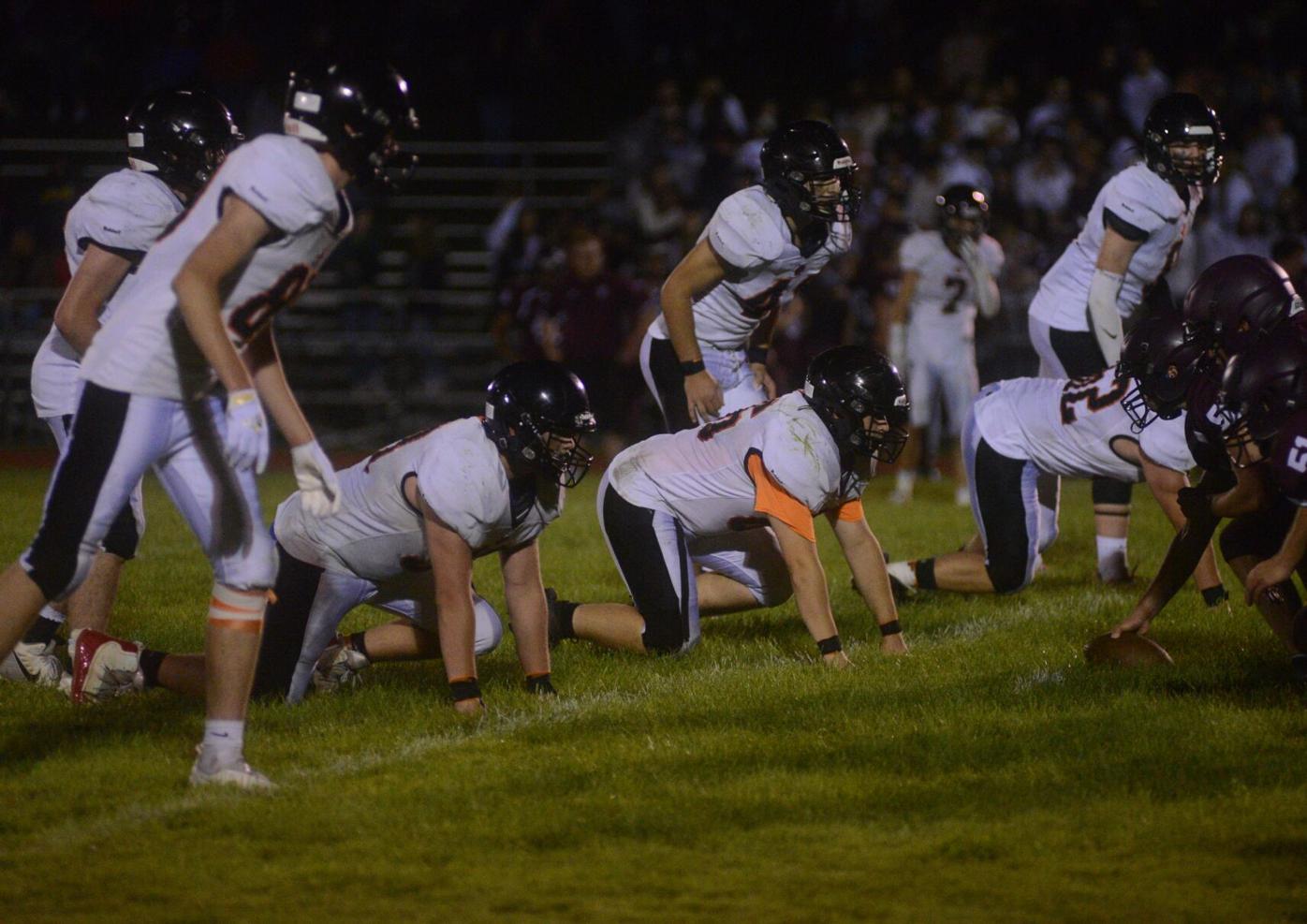 Quarterback Ryan Scott and the Warriors will look to remain undefeated through the season's first quarter. Wahconah hosts Lee on Friday in The Eagle's Game of the Week.

Football returns in Berkshire County with five games on the slate after six on opening weekend.

The united Blue Devils and Mounties have an infrequently-seen bye in Week 2 of the season. Meanwhile, two more strictly homegrown games are again on the schedule. Taconic is traveling to Hoosac Valley, while Lee will play at Wahconah.

Pittsfield, McCann Tech and Monument Mountain each get a helping of out-of-county action. The Generals are hosting Amherst, while the Hornets and Spartans travel out of the county.

Five local teams are searching for their first win this weekend, while Dalton features a battle of unbeatens in Wahconah and Lee.

If you’re looking to watch or DVR something this weekend, Friday’s game between Pittsfield and Amherst will stream live on Pittsfield Community Television’s Facebook page, PCTV ETV Channel 1302 and PCTV Select.

Additionally, for full game stories from the weekend delivered right to your inbox, subscribe to The Huddle newsletter at BerkshireEagle.com/newsletter.

The Warriors start the season with three straight games against Berkshire County rivals and already navigated a heavy game against Pittsfield last weekend.

Wahconah and Pittsfield combined for 44 points in the first quarter before grinding to a screeching halt. Quarterback Ryan Scott guided the Warriors, completing 66 percent of his passes while Wahconah scored 14-unanswered points to end the game.

Ben Noyes and Owen Salvatore each scored and averaged at least 15 yards per reception. The duo outside worked well with Jonah Smith’s 83 yards and a touchdown on the ground. The senior averaged five yards a carry as the Warriors finished with 36 points.

The Wildcats will have their hands full with Wahconah’s diverse bunch of playmakers after putting a cap on Monument Mountain’s offense on opening night. Lee held Monument to 108 total yards and scored in three of four quarters behind 78 yards on the ground from Cam Freeman.

Lee exchanged a Shaun Kinney fumble recovery for eight points in the third quarter and turnovers will likely be key for the visitors to remain undefeated. Wahconah scored four of the team’s five touchdowns from outside the red zone last week. Lee needs some big-time insulators to contain that type of voltage.

Taconic was just one of two teams to leave the county in Week 1 and there were a few things to take away from the trip to East Longmeadow. Sean Harrigan looks like he may run past, or through, just about anyone this season after bringing in four receptions for 127 yards and a touchdown, The senior broke free for a 64-yard touchdown, Taconic’s lone score last week.

The Green and Gold will continue to throw the ball, but everything starts with the rushing attack. Attacking second-and-medium throws is much easier than needing the full 10 in just one chunk. Taconic can be explosive but setting the tone on first down and moving the sticks on third will help with sustainability.

Like Taconic, Hoosac Valley is searching for the season’s first win after falling to Northampton in overtime. The Hurricanes certainly could run the ball in Week 1 until the lights of Renfew Field, as Aaron Bush averaged seven yards per carry and Shaun Kastner Jr. erupted for 115 yards and a touchdown on 18 totes.

The running game opened up the field for Caleb Harrington’s 44 yards on two receptions. Sustaining drives hasn’t been an issue in Adams as the Hurricanes held the ball for all but four plays against Northampton in the fourth quarter.

Quarterback Carson Meczywor scored on runs of one yard and three yards, but was stopped at the goal line on a fourth-down attempt. Taconic will need to pounce on Hoosac in short-yardage situations in order to derail the storm of backs for the Hurricanes.

Touchdown passes of 71, 45 and 24 yards went a long way toward quarterback Patrick Rindfuss averaging an eye-popping 13 yards per attempt in last Friday’s game against Wahconah.

Rindfuss added 30 yards on the ground to his 320 through the air as the Generals put up 20 points in the first quarter alone. Davon Solomon simply went off, catching five passes — three of which ended in the end zone — for 142 yards. Louis Rhodes was right behind him with 137 yards and one touchdown on six receptions, including the 71-yard score on the third play of the game. While Pittsfield’s passing numbers pop off the page, so do the rushing numbers.

The Generals couldn’t get much of a push in the trenches against Wahconah as only Rhodes, 11 yards on three carries, finished over two yards per carry on at least three attempts. Considering the talent on Pittsfield’s line, it wouldn’t come as any surprise if the Generals flipped the script in terms of success on the ground in Week 2.

Amherst’s two games have been a bit volatile, to say the least. The Hurricanes won 35-0 against Smith Vocational on Sept. 3 but were shut out, losing 44-0 against Westfield last week. Pittsfield allowed just 14 points over the final 36 minutes of regulation last Friday and it will be consistency — on both sides of the ball — that gets the Generals rocking and rolling in the right direction.

The youthful Hornets are hitting the road and taking a trip to Orange as they search for the season’s first win.

McCann Tech started the season at home last Saturday. In fact, the Hornets led for most of the game, but 16 unanswered points from Franklin Tech was too much to overcome.

Seneca Bolte scored on a 30-yard scamper and Troy Wnuk scored from two yards out to help McCann Tech overcome four penalties in the first quarter. For each inexperienced mistake, the Hornets had the talent to overcome the errors, until the tanks hit empty.

Friday’s game at Mahar could be an opportunity for McCann Tech to really get comfortable between the white lines and establish a rhythm the Hornets can march to for the remainder of the year.

Mahar was home last Friday for the team’s opening game, a 42-0 loss to Easthampton.

The Spartans failed to find the end zone on opening night but it is important to keep in mind that an answer guide to Lee’s defense early in the season isn’t necessarily easy to find.

Monument Mountain spread receivers out wide and the Wildcats forced the Spartans to make the plays with linebackers coming through the middle. The constant pressure capped the rushing attack at 41 yards, but Monument will look to open up more lanes with success in the passing game.

Quarterback Hunter DeGrenier completed 12 of his 18 passes and Nick Henderson averaged nearly eight yards on his seven receptions. Saturday’s showdown at dusk will be another tough test for the Spartans. Easthampton’s home opener follows a 42-0 shutout of Mahar in the season’s first act.

Sustaining drives will not only result in points for the Spartans, but it keeps Luke Kraus away from the ball. The Easthampton back scored two rushing touchdowns, a receiving touchdown and returned a pick-six against Mahar.

Jake Mendel | Jake's Breaks: Remembering 9/11 on the football field; Wahconah and Pittsfield did what in the first quarter?

As I walked toward the Monument Mountain football field on Friday I didn't need the reminder. Like everyone else who was alive at the time — I remember exactly where I was.

After a dizzying first quarter that featured six combined touchdowns and 42 points, Wahconah settled into a groove and out-maneuvered Pittsfield High to a 36-26 victory on Friday night in Dalton.

Shaun Kastner Jr. and Aaron Bush combined for 229 rushing yards as the Hurricanes ran wild at Renfrew Field against Taconic on Friday night.

Easthampton quarterback Shea Healy threw for 110 yards and three touchdowns while the Eagles' stable of backs rushed for for another 163 yards in a 32-0 win over Monument Mountain on Saturday.