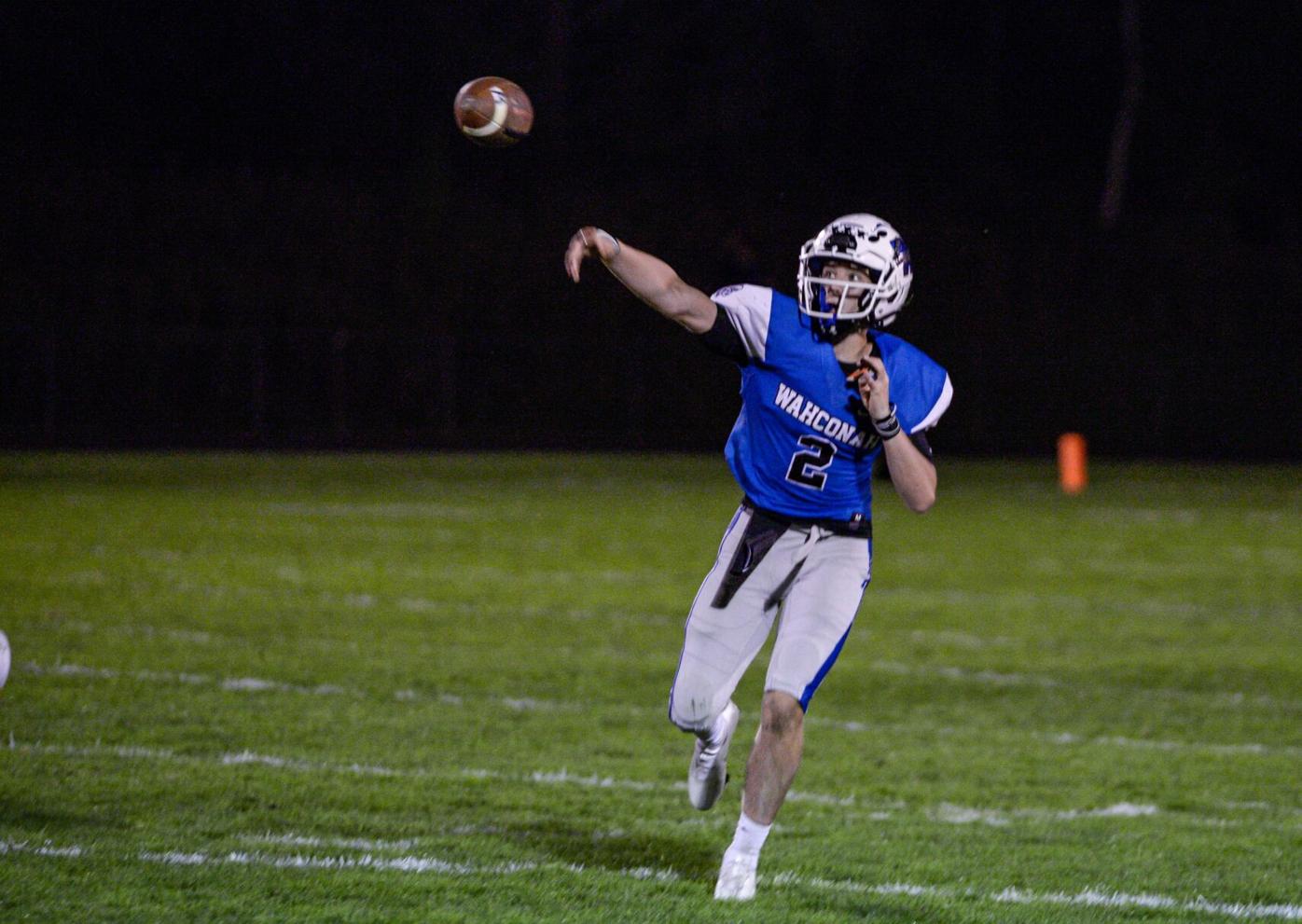 Wahconah quarterback Ryan Scott and the 3-0 Warriors put their perfect record on the line against unbeaten East Longmeadow tonight on the road. 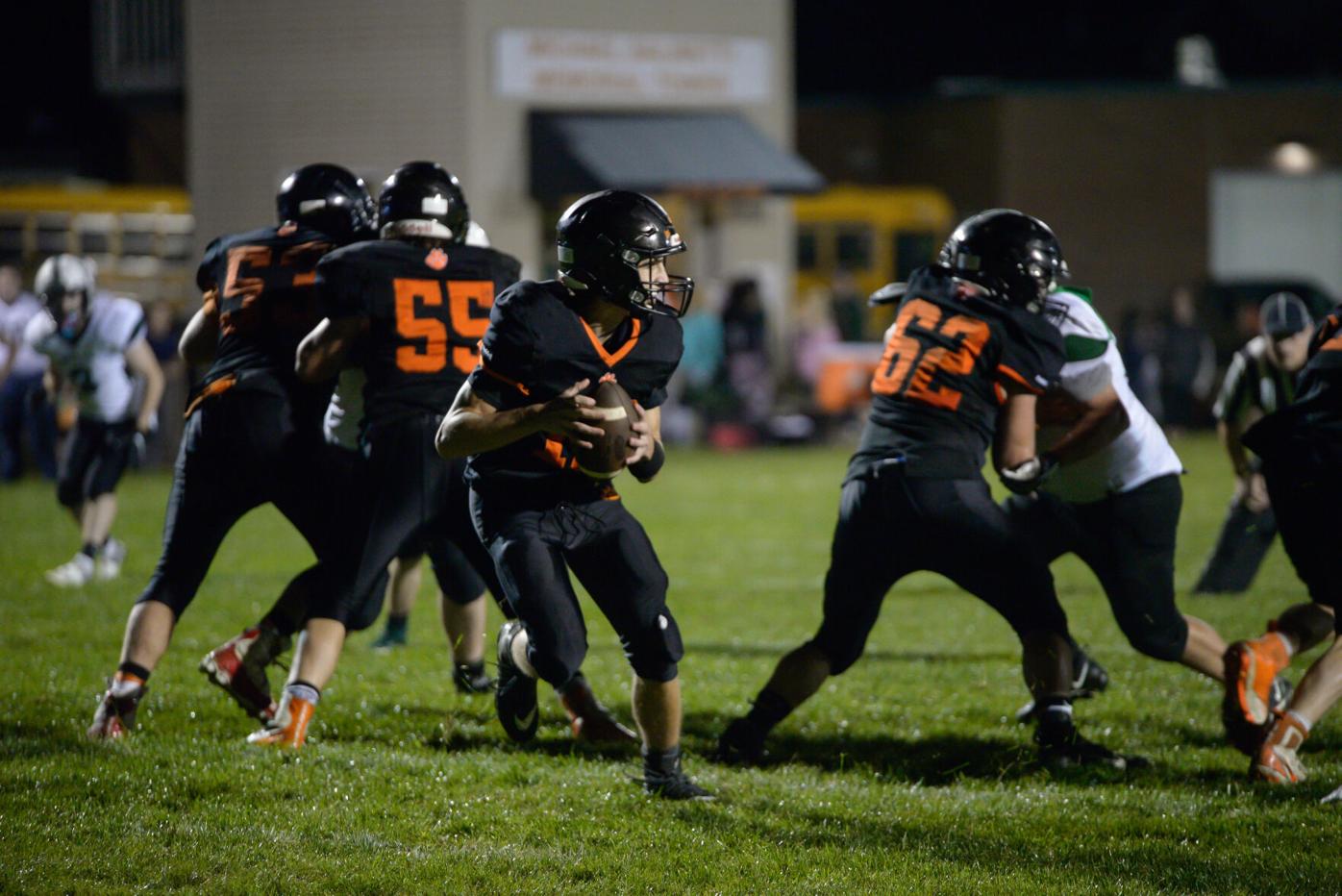 Wahconah quarterback Ryan Scott and the 3-0 Warriors put their perfect record on the line against unbeaten East Longmeadow tonight on the road.

The 2021 high school football regular season will be at the midway mark by the time Saturday’s mile rivalry between the Blue Devils and Hornets comes to a close.

Week 4 seems to be the first week to truly feature divisional showdowns throughout the Pioneer Valley Interscholastic Athletic Conference. The Warriors and Spartans play under the Game of the Week spotlight, as one will declare front-seat privileges in the Suburban South.

Pittsfield returns to action after missing last week’s game due to COVID-19 protocols. The Generals are the only team without a losing record in the Suburban North and can gain some separation in tonight’s game at Putnam. Additionally, per Springfield requirements, masks will be required for fans.

Hoosac Valley and Lee will have the opportunity to catch up to league-leading Easthampton in the Intercounty South.

Monument Mountain is off after picking up the season’s first win last week against Athol.

For full game stories from the weekend delivered right to your inbox, subscribe to The Huddle newsletter at BerkshireEagle.com/newsletter.

The Warriors marched through Berkshire County competition, but things aren’t getting any easier for Wahconah as we approach the season’s back nine.

The Warriors are headed to East Longmeadow for the first of five straight games against Suburban South rivals to end the regular season.

Scoring at least 34 points in every game, the backfield of Jonah Smith and Ryan Scott has worked to perfection. Scott is spreading the ball around as Luke DiCicco, Owen Salvatore and Ben Noyes each have at least five receptions through three games.

The senior has 454 yards and 6 touchdowns through three games. Keep in mind, though, the Warriors are also a tough defense to solve. Smith snatched an interception against Taconic last week and Wyatt George could not be contained in the trenches.

With two of the Suburban South’s three undefeated teams battling, tonight’s game will set the tone for the season’s second stanza.

The Hurricanes have turned the corner, scoring 40-plus points in two straight weeks. Hoosac Valley is outscoring opponents 104-38 and tonight’s voyage to Easthampton is an SAT-level test.

Not only is Easthampton undefeated, but the Eagles won three games by outscoring opponents 124-14.

Easthampton can win a variety of ways but it starts with Shea Healy under center and the threats of Luke Kraus and Keith Cudworth on the outside. The duo combined for 74 receiving yards and three touchdowns in a Week 2 win over Monument.

Additionally, the trio of Bb Jean Jacques, Angel Moody and Giancarlo Osiecki combined for 106 another yards on the ground.

Hoosac’s offense stats with the dynamic duo of Shaun Kastner Jr. and Aaron Bush. The pair has run for 545 yards on 61 carries so far this season. Seven of those carries have ended in the end zone and quarterback Carson Meczywor has another five rushing touchdowns for Cheshire’s squad.

The rushing attack’s big-play potential can’t be underestimated and it will be up to the Hurricanes to challenge an Easthampton offense that has been nearly perfect through three games.

A visit to Suburban North rival Ludlow could be a get-right game for the Green and Gold.

Hoosac Valley and Wahconah took advantage of Taconic’s growing pains, but the offense continues to move the ball. Sean Harrigan and Dez Merced are making magic on the outside and on special teams. Meanwhile, quarterback Matt McIntosh scored a rushing touchdown last week against Wahconah.

The Lions clawed to their first win last week, a Thursday night 12-6 win over Belchertown. Ludlow was outscored 70-6 in the season’s first two weeks.

Pittsfield is the only team without a losing record in the Suburban North and a win on tonight would go a long way for Taconic’s playoff pursuit.

Speaking of Pittsfield and Suburban North battles, the Generals are headed to play winless Putnam after last week’s game against Westfield was called due to COVID-19 protocols.

Putnam has allowed at least 36 points in every game this season and the Beavers will have their hands full trying to contain Pittsfield’s Patrick Rindfuss. In two games Rindfuss has combined six passing touchdowns with another pair on the ground behind Pittsfield’s stacked offensive line.

Louis Rhodes and Davon Solomon are weapons for Rindfuss on the outside and will be eager to make up for the lost time by finding the end zone. Solomon has four touchdowns grabs and Rhodes has scored on the ground and through the air this year.

Pittsfield’s aspirations are high and the Generals can create some major separation in the Suburban North by riding the momentum of Sept. 18’s win over Amherst.

The Wildcats have been boom or bust through three games, outscoring opponents 51-0 in two wins and on the other hand, falling to Wahconah 34-0 in Week 2.

tonight’s voyage to South Deerfield offers a chance to turn last week’s win into a winning streak against a Red Hawks team that has scored 12 points through two games.

When the lights came on, Lee football got rolling and beat McCann Tech 27-0

Lee is looking up at 3-0 Easthampton in the Intercounty South and the Wildcats are one of three teams in the division with a record of 2-1.

Hayden Siok is coming off his best game under center, completing 11 of his 14 passes for 151 yards and two touchdowns. Cam Freeman and Shaun Kinney each averaged over 10 yards on at least three receptions and found the end zone in last week’s shutout of McCann.

A quick start from Siok and company will be hard for the Red Hawks to overcome. A lead means the Wildcats can grind the clock with the likes of Tyler Bartini, averaging 6.3 yards per carry, and Freeman, 4.8 yards per carry.

Louis Guillotte followed his Week 1, 253-yard performance with another 256 yards on the ground in Week 3. The junior is averaging 12 yards a carry and the Mount Greylock and Drury co-op is looking like the unit that won five straight games in 2019.

Guillotte is currently on pace for an eye-popping 1,700-yard season and while that may not seem sustainable, reaching 28 points has been the standard in North Adams. JayShawn Moore adds another dimension to the offense, averaging 5 yards per carry on 13 attempts this year.

While it is hard to ignore the attention Drury’s offense commands, keep in mind that the Blue Devil defense has allowed just six points in two games. On Saturday they’ll be tasked with slowing the ground game of McCann Tech.

David Delisle emerged as a threat in the Hornets’ ground attack last week, rushing for 118 yards on 21 carries against the Wildcats. It took him just one game to match Seneca Bolte with a team-high 21 carries. Bolte is also averaging 7 yards per carry and has found the end zone three times through three games.