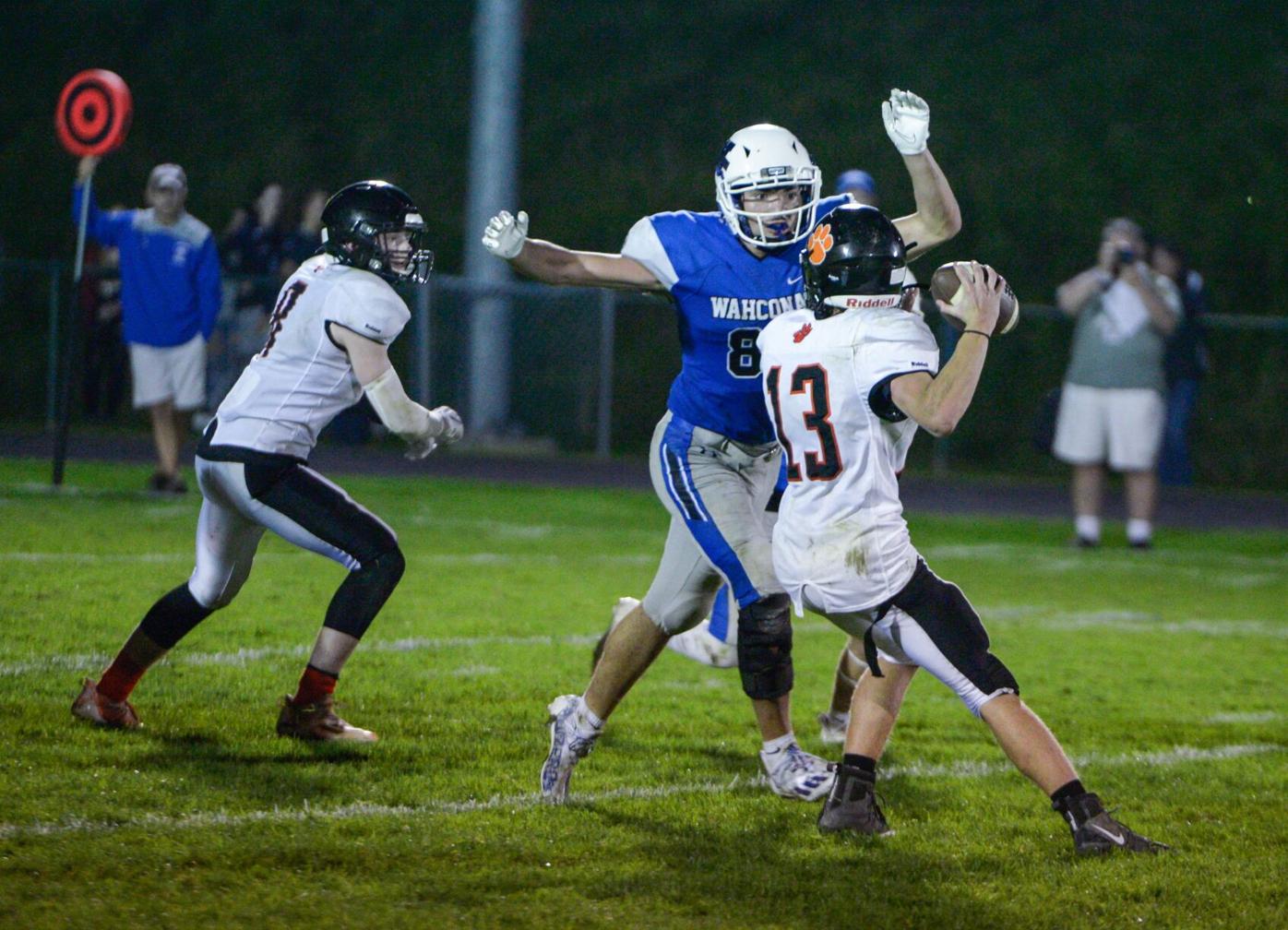 Wahconah's Jacob Cooper gets into the face of Lee quarterback Hayden Siok earlier this season. 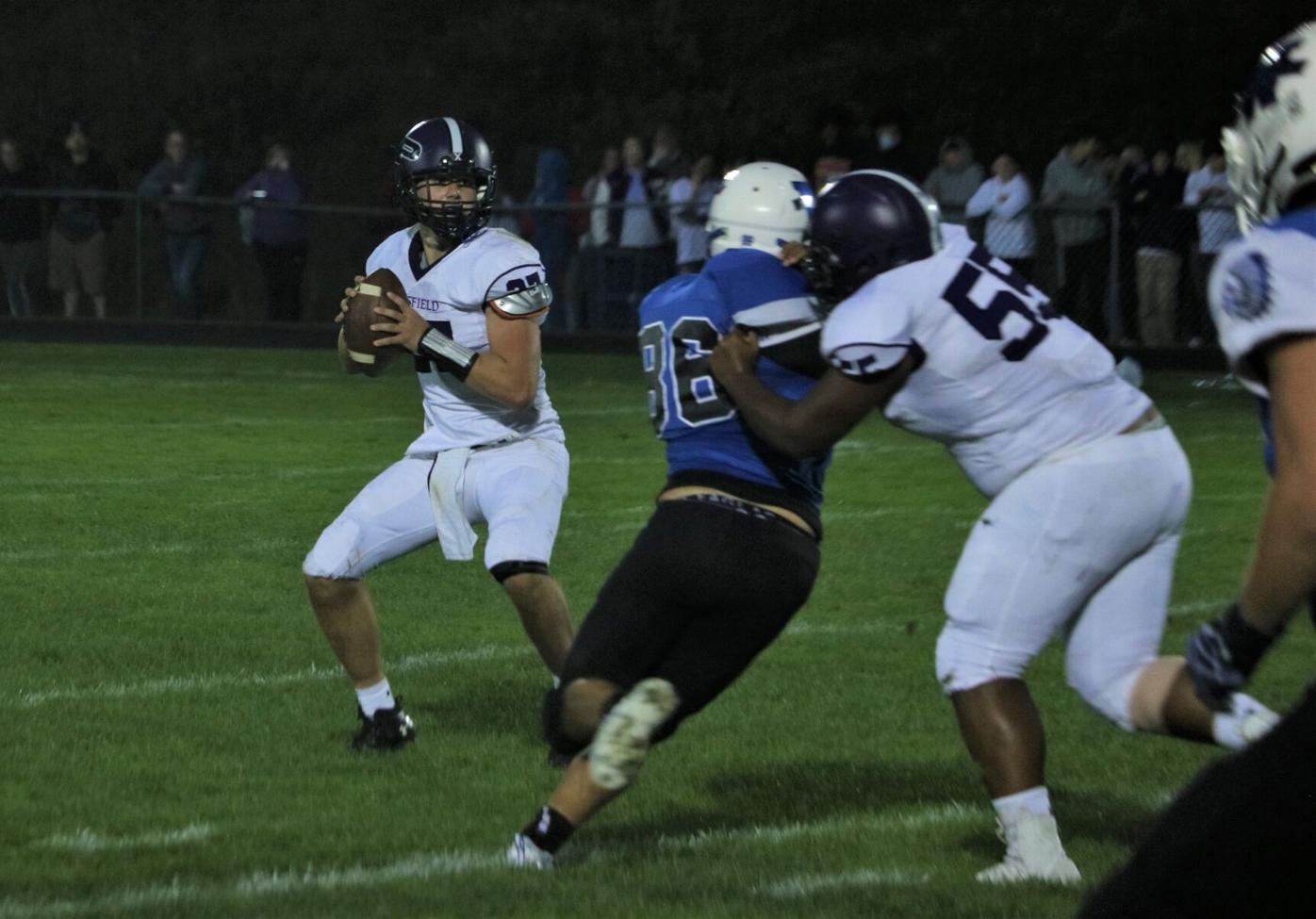 Pittsfield QB Patrick Rindfuss is on fire with 13 touchdowns through three games this season. 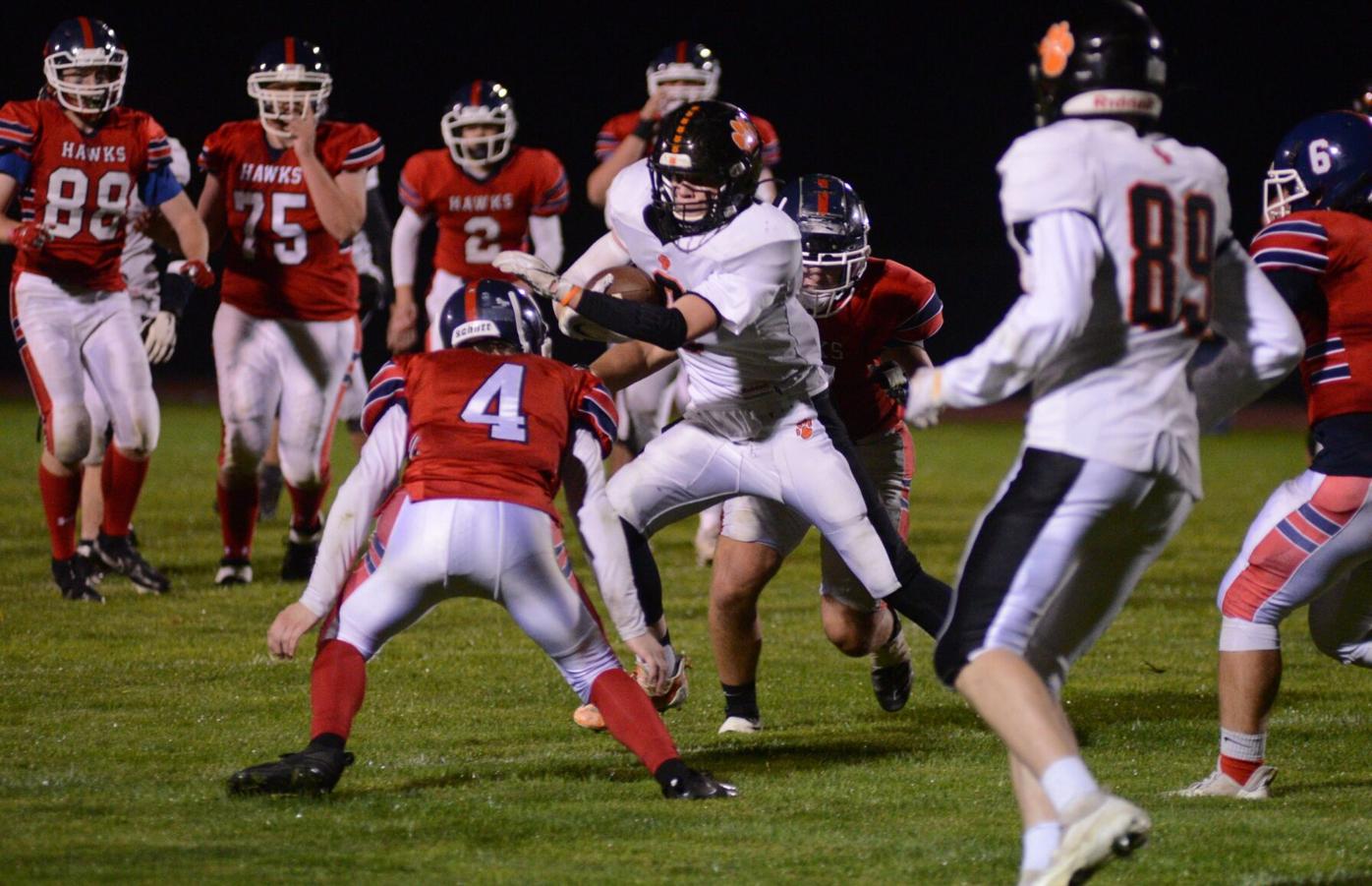 Lee sophomore Shaun Kinney had a season-high in both receptions and yards last week against Frontier. The Wildcats face Commerce at home this weekend.

Wahconah's Jacob Cooper gets into the face of Lee quarterback Hayden Siok earlier this season.

Pittsfield QB Patrick Rindfuss is on fire with 13 touchdowns through three games this season.

Lee sophomore Shaun Kinney had a season-high in both receptions and yards last week against Frontier. The Wildcats face Commerce at home this weekend.

There is little room for error as we enter the second half of the high school football season.

Week 5 is the first week without a battle between Berkshire County teams, but don’t touch that dial — this slate is saucy.

The Warriors are featured in our Game of The Week as opposing defenses haven’t stopped Wahconah’s offense from averaging 39 points per game. Agawam is allowing less than 7 points per game through four weeks and tonight is shaping up to be Wahconah’s toughest test this season.

It’ll be a party at Berkshire Community College as both Pittsfield and Taconic hit the turf on tonight night. Pittsfield continues to put up numbers and by the time you finish reading this, there is a strong chance quarterback Patrick Rindfuss has again found the end zone.

On the other hand, Taconic, along with McCann Tech, have an opportunity to hop into the win column with favorable games slated at home. The Blue Devils have a bye after beating the Hornets at home last week and the Spartans return to action as they look to build a winning streak with a trip to Northampton.

It is business as usual for the Wildcats and Hurricanes, who keep winning the games they should. Stop me if you heard this before, I think these two teams may cross paths more than once this year.

The MIAA has released Power Rankings for each division. Individual ranks can be found below.

The last two undefeated teams in the Suburban South meet this weekend as the Warriors look to continue their perfect ride. Wahconah’s passing game is a work in progress, but when it hits — it hits big. Owen Salvatore averaged 26 yards per reception and found the end zone on two of his three catches last week. Quarterback Ryan Scott notched his season-high with 3 touchdown passes.

Smith and Scott drive Wahconah football to and through East Longmeadow

Jonah Smith sits at 699 yards on the year after running for 245 yards and three touchdowns against East Longmeadow.

Agawam’s unit has just been a hair better than the Warriors, with 2 more points on the year. Additionally, Agawam is giving up less than 7 points per game on the defensive side of the ball.

Wahconah’s offense is yet to be stopped this season — but it will be put to the test on tonight. The Warriors are ranked No. 13 in D-VII, Agawam is No. 12 in D-III.

Three teams in the Suburban North are 1-0 in divisional games, but the Generals are the only team to break 100 total points so far this season.

Pittsfield pounded Putnam 58-8 last week and quarterback Patrick Rindfuss added five more touchdowns to his season total. The senior has 13 touchdowns through three games — or one every 11 minutes of game time through Pittsfield’s 12 quarters this season.

Back on the football field, Pittsfield High routs Putnam 58-8

Tailback Georgios Zamakis has found the end zone in each of the last two games for Pittsfield and has 82 yards on his 9 carries this season. Louis Rhodes is averaging just under 100 receiving yards per game and has scored two touchdowns.

The Generals are stout defensively, allowing one touchdown in each of the last two weeks. Meanwhile, Chicopee has scored more than six points just once this season.

Pittsfield is ranked No. 14 in the D-V power rankings, while Chicopee sits at No. 30.

The Spartans are one of three teams in the Tri-County that hasn’t played a divisional game and that will change shortly. Monument hits the road to face a Vikings squad that has allowed at least 26 points in each of the last three games.

Smith Vocational earned its first win last week with a 37-26 victory over Pathfinder, while the Spartans got off the schneid with a 14-0 win against Athol before last week’s bye. Monument saw its rushing bubble burst on Sept. 24 as Hunter DeGrenier (8 YPC), Reece Mullen (5 YPC) and freshman Shaun Frank (6 YPC) all broke 50 yards rushing in the win.

Frank’s emergence is a welcomed sight for the Spartans. The tailback has 217 rushing yards on 40 carries this season after his monster 177-yard performance two weeks ago.

Monument is drifting away from its passing attack, but it’s hard to imagine the Spartans not striking through the air. With opponents loading the box there will be advantages on the outside, like Nick Henderson’s 55-yard reception against Athol.

The Spartans entered the year with high expectations and now know what is needed to win a football game. Smith Vocational is 1-0 in divisional games and Monument has an opportunity to plant roots in the Tri-County playoff race.

The Wildcats began league play with a 19-14 win over Frontier in South Deerfield last week and the divisional battles keep on coming. Commerce is on a two-game slide after falling to Belchertown 22-14 last week.

Lee sits atop the Intercounty South but there isn’t a lot of wiggle room in the six-team division. With that in mind, the Wildcats can’t complain about where things stand through four weeks.

A stout defense has held opponents not named Wahconah to 14 points through three weeks and showcased big-time guts with needed stops to keep Frontier out of the end zone late.

The Wildcats scored all 19 points in the first half last week but the Lee defense is capable of carrying the team through the ups and downs on the other side of the football.

With that in mind, Lee is putting together some positive trends in the pursuit of points.

Shaun Kinney’s usage inside the offense continues to grow. The tight end has seen his reception total jump each week. Two receptions in Week 2 turned into three in Week 3 before last week’s emergence with 53 yards and a touchdown on five receptions.

Senior Cam Tyer’s return is another positive for the offense, gaining 80 total yards a week ago. The Wildcats have a chance to make it three-straight wins and create distance in the Intercounty South with a bit of home cooking on tonight night.

The Wildcats are currently ranked No. 33 in the D-VIII Rankings and Commerce is No. 23 in D-VI.

Putnam (0-4) at Taconic (0-4), 8 p.m., tonightPutnam has allowed 187 points through four games and Taconic is coming off its best offensive performance in last week’s loss to Ludlow. A season-high 20 points weren’t enough to pull out a win, but it may be the confidence boost the Green and Gold needs to sustain drives on offense.

Quarterback Matt McIntosh scored a rushing touchdown for the second time in as many weeks and connected with Dez Merced for six points through the air.

Putnam has cracked 20 points just once this season. A quick start at home may be the snowball needed to begin the avalanche in Pittsfield. The Green and Gold are No. 21 in D-VIII, Putnam is No. 30 in D-VI.

The Hornets have scored at least 14 points in three of four games this season and David Delisle has shown he is willing to carry the offense — and the opposing defense — up and down the field.

McCann Tech is coming off an 18-6 loss against Drury in which Delisle broke an 80-yard touchdown. Seneca Bolte and Aiden Macpherson remained in the mix, carrying the ball 15 times for 65 yards a week ago.

Finishing drives is the biggest issue for the Hornets but Saturday’s matchup could be the get-right game McCann Tech neets. Pathfinder has allowed 129 points this season. To put that into perspective, the Hornets have allowed 101 points through four games.

A confidence boost from the home crowd may help McCann gain traction in the second half of the season. The MIAA has McCann Tech ranked 40th in D-VIII, three spots below Pathfinder.

Hoosac Valley is on a three-game winning streak and scoring hasn’t been an issue.

Frontier will have its hands full, as the combination of Aaron Bush and Shaun Kastner Jr. has powered the Hurricanes to at least 30 points in each of the last three games. Additionally, Hoosac has outscored opponents 72-0 over the last two weeks.

Kastner dominated against East Longmeadow with 16 carries for 126 yards and a touchdown. Bush added another 60 yards on 10 carries. Quarterback Carson Meczywor is up to 8 touchdowns on the year after crossing the goal line three times a week ago.

Last week’s game was Meczywor’s strongest performance on the ground with 56 yards on 15 carries. Teams are struggling to keep up with Hoosac Valley, and Frontier scored just 14 points in a loss to Lee last week.

The Hurricanes sit at No. 3 in the D-VIII Power Rankings and Frontier is No. 34.