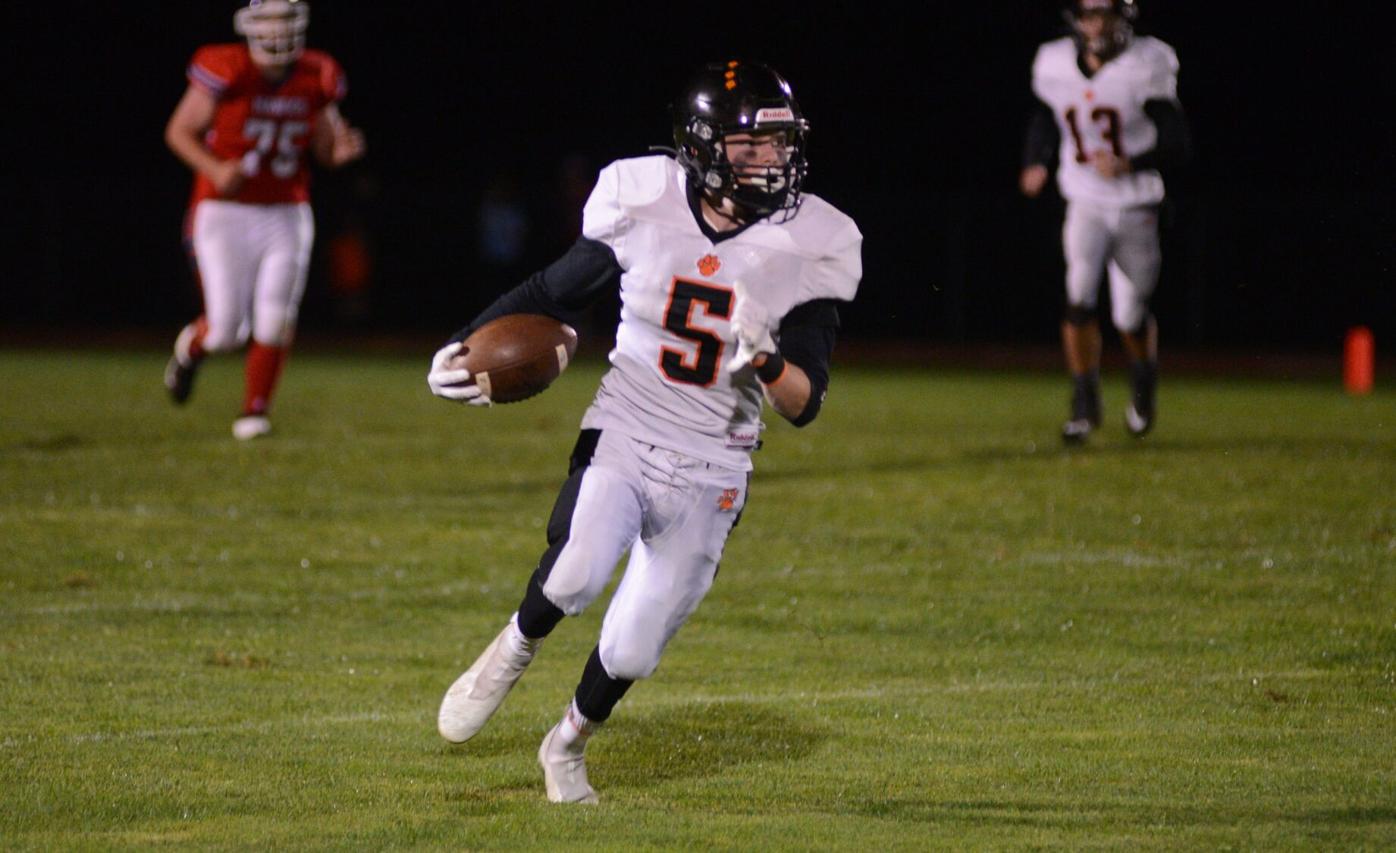 Cam Tyer breaks free into the open field as the Wildcats did their damage on the ground in Friday's win at Frontier. 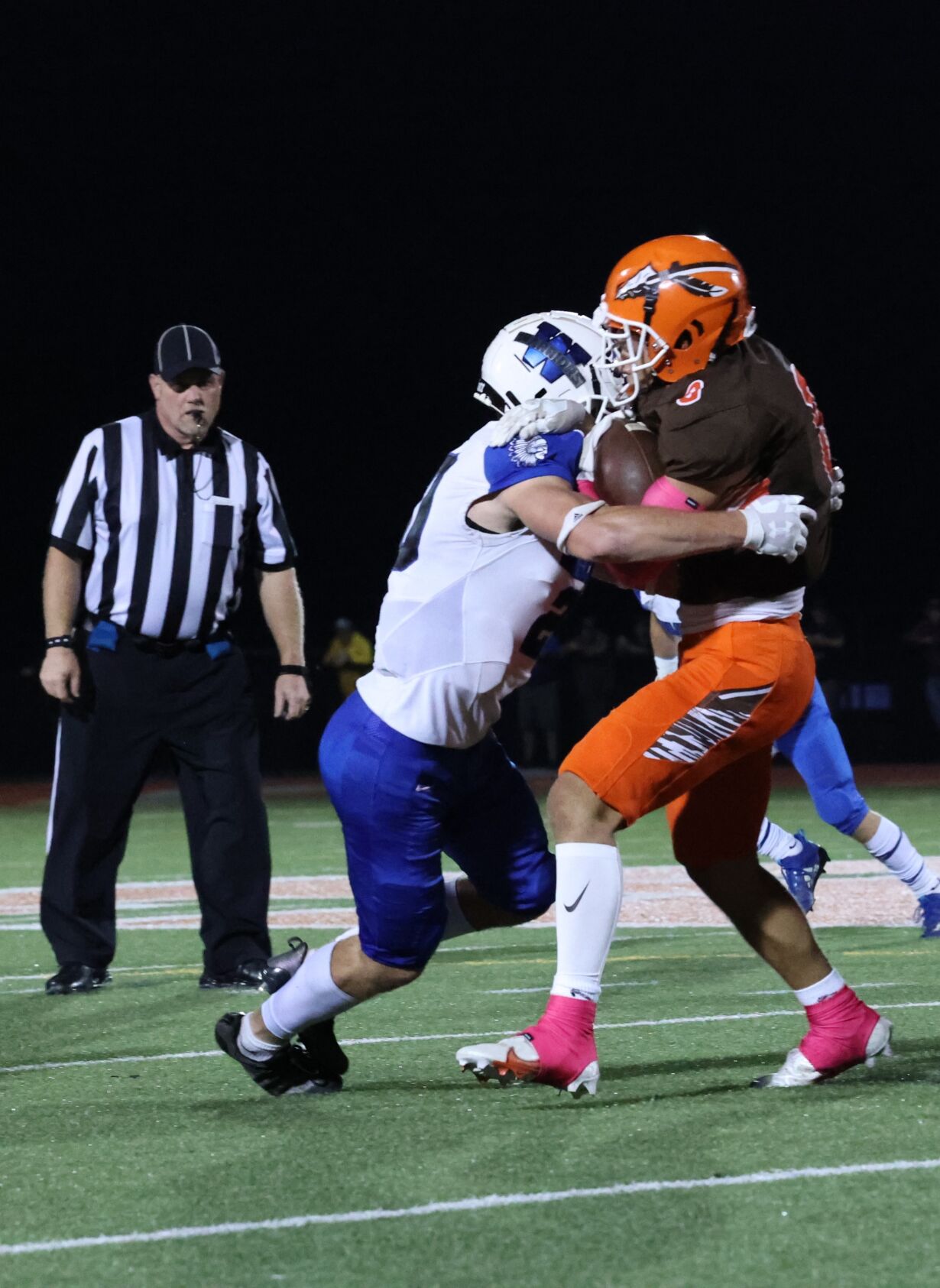 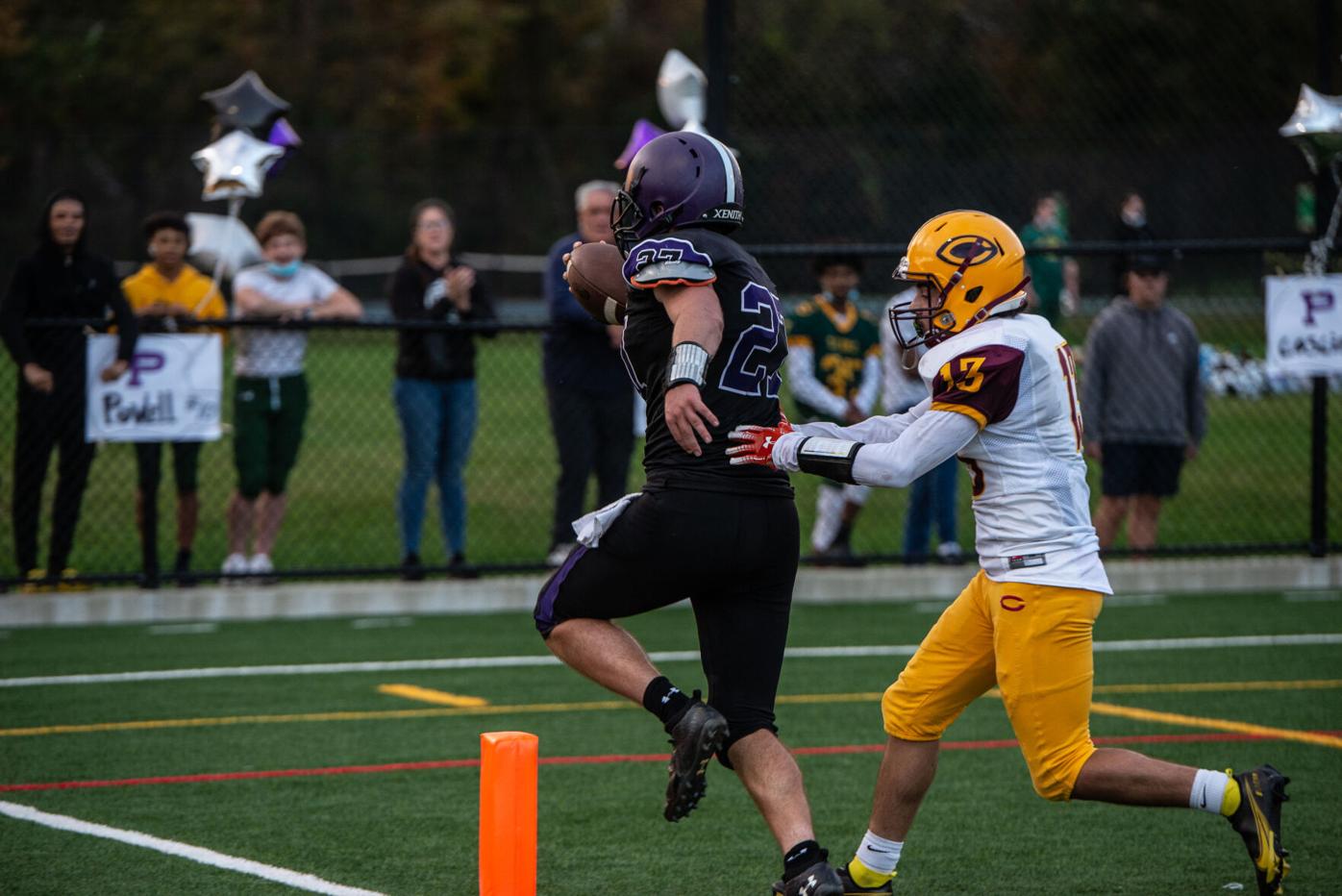 Pittsfield High QB Patrick Rindfuss tucks a carry inside the pylon ahead of a Chicopee defender for a touchdown on Friday in the Generals' home win.

Cam Tyer breaks free into the open field as the Wildcats did their damage on the ground in Friday's win at Frontier.

Pittsfield High QB Patrick Rindfuss tucks a carry inside the pylon ahead of a Chicopee defender for a touchdown on Friday in the Generals' home win.

Week 6 of the Berkshire County football season arrives later tonight and will end just a few short hours later as all six of the county’s games take place under the Friday night lights.

A seventh game was on the schedule, but tonight’s showdown between McCann Tech and Monument Mountain has been canceled. The game was called due to a couple of reasons, including the fact that the Hornets left last week’s game against Pathfinder pretty banged up with injuries, according to an email sent by Monument Mountain athletic director Karl Zigmand.

Only one local team is playing at home and it is spicy enough to be our Game of the Week. The Wildcats, riding a four-game win streak, host an Easthampton squad looking to gain traction in the Intercounty South.

The MIAA’s complete Power Rankings can be found here.

The Wildcats scored a season-high 43 points a week ago and will have to keep the offense moving against an Easthampton squad that is outsourcing opponents 152-44.

The Eagles have three shutouts on the year, but a 30-0 loss to Hoosac Valley on Oct. 1 showcased a bit of the team’s kryptonite.

Lee football scores on offense, defense in 43-18 rout of Commerce

Lee’s rushing attack was the difference against Commerce a week ago as Tyler Bartini broke free for 107 yards and a touchdown. Elliot Winston built on a 67-yard performance in Week 4 with 88 yards and a score on 10 carries.

The Wildcat offense didn’t do all the work, as Alex DelVecchio recovered a fumble in the end zone and Chase Johnson ran back a 99-yard interception for a touchdown.

Each team resides in the Intercounty South and a win would bump the Wildcats to 3-0 in the division. Easthampton, however, is 1-1 due to the loss to the Hurricanes. Hoosac is also 2-0 and the Wildcats and Hurricanes clash next week in Cheshire, potentially with a divisional title on the line. But to get that opportunity, Lee can’t look past tonight’s home tilt with the Eagles.

The MIAA Power Rankings have the Eagles as the eighth-best team in Division VI and the Wildcats are No. 10 in D-VIII.

The Green and Gold put one foot in front of the other last week. Now it’s time to see if they can walk across the floor. A 48-minute slugfest translated to Taconic’s first win of the season against Putnam.

A trip to Szot Park is an opportunity to make it two-straight as Chicopee has scored more than six points just twice on the year.

The Week 5 win over Putnam was truly a team effort. Dazyear Moore rushed for 100 yards on 10 carries, while Dez Merced sprinkled in another 41 yards and a touchdown. The ground game gave quarterback Matt McIntosh the time he needed to find TraQuon Hall and Sean Harrigan for touchdown passes.

Taconic got a glimpse of the Pacers last week as Chicopee played at Berkshire Community College against Pittsfield in the first game of tonight’s doubleheader. While the season is beginning to wind down, Taconic can build a late push with a win over a Suburban North rival tonight, and head into next week’s rivalry bout with PHS on a little streak.

Week 5 was the first time since opening night that the Hurricanes were held under 30 points. The difference, though, is that Hoosac blanked Frontier in a 14-0 win last Saturday.

Belchertown will have its issues against a Hoosac defense that has allowed a total of zero points in the last three games. Additionally, the Orioles are coming off a 28-0 loss to Easthampton — a team Hoosac Valley knocked off 30-0.

The Hurricanes have scored 18 rushing touchdowns but are more than willing to take what is available through the air. Quarterback Carson Meczywor has 12 touchdowns on the year and has connected with Caleb Harrington for a touchdown pass in three of the last four weeks. Like Lee, though, it’ll be important for Hoosac to focus on the task at hand and leave Oct. 23 for Monday’s practice.

The Hurricanes are riding a four-game winning streak and rank fourth in D-VIII. Belchertown is No. 28 in D-V.

The Generals, much like Hoosac Valley, are perfect since a loss on opening night. Pittsfield has established itself as a contender in D-V, outsourcing opponents 150-16 over the last three games.

Quarterback Patrick Rindfuss has thrown nine passing touchdowns and has rushed for seven more for a Berkshire County-leading 16-total touchdowns.

South Hadley is riding a two-game winning streak with big wins over Chicopee and Ludlow. The winner of tonight’s game will be alone atop the Suburban North standings.

The Generals have outscored divisional foes 98-8 and the Tigers have a point differential of 82-14 inside the division. Big-picture numbers tell a bit of a different story as Pittsfield has a plus-124 point differential through four games. South Hadley, through five games, is a plus-36.

Pittsfield’s blend of physicality up front and speed outside is a code that is yet to be cracked as the Generals are ranked No. 11 in D-V. The Tigers are No. 12 in D-VI.

The Blue Devils haven’t hit the field since Oct. 2’s 18-6 win over McCann Tech in North Adams. Louis Guilotte was the heart of Drury’s offense in the first two weeks with 509 yards on 44 carries.

Guilotte found the end zone on a kick return and still averaged 4.5 yards per carry against the Hornets, but the Blue Devils showcased some ripples on offense and featured the emergence of Jackson Powell.

The receiver captured two passing touchdowns in the win. Quarterback Anthony Pettengill rolled to the outside where Powell won against his defender in 1-on-1 coverage on both touchdown receptions.

Pathfinder began the season on a four-game losing streak before a 34-6 win at McCann Tech a week ago. Pathfinder fell to Athol 28-24 on Sept. 17, a team Drury topped 28-0.

Drury’s win over McCann Tech was the team’s first against a Tri-County foe. A win on tonight would keep the Blue Devils perfect with a one-game lead in the division.

The Warriors, with a plus-125 point differential, continue to pass each and every test with flying colors. Wahconah spent the last two weeks knocking off previously undefeated teams and features an undefeated record in the Suburban South.

It’s hard to identify Wahconah’s strength on the offensive side of the football as the student-athletes from Dalton can move the rock on the ground and through the air. Jonah Smith is making a case that 10-yards per carry on the ground may actually be sustainable for a full season. The senior has 903 yards on 89 carries with 12 touchdowns.

Wahconah football dismantles Brownies in battle of unbeatens at Agawam

While those are hefty numbers on the ground, Ryan Scott is keeping Wahconah consistent through the air. The quarterback has thrown for at least two touchdowns in four of five games.

Additionally, the Warriors have won each of the last four games by at least 16 points. Amherst hasn’t had much success this season with a point differential of minus-168.

Tonight is an opportunity for Wahconah to create some more separation in the Suburban South. The Warriors came in as the third-best team in the most recent MIAA D-VII power rankings. Amherst is No. 29 in D-IV.