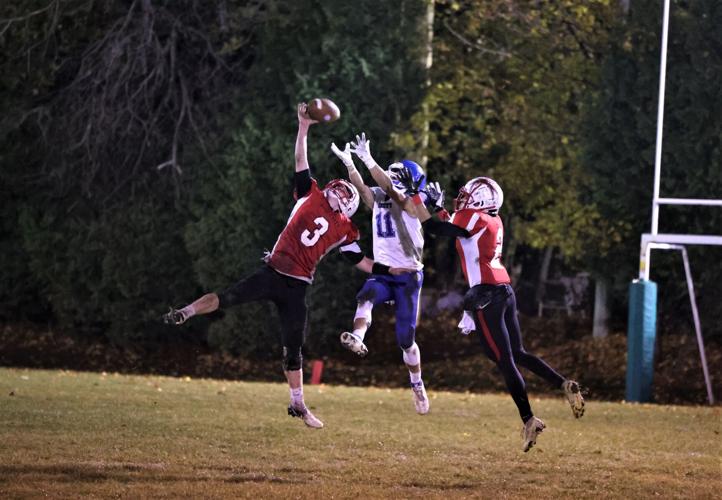 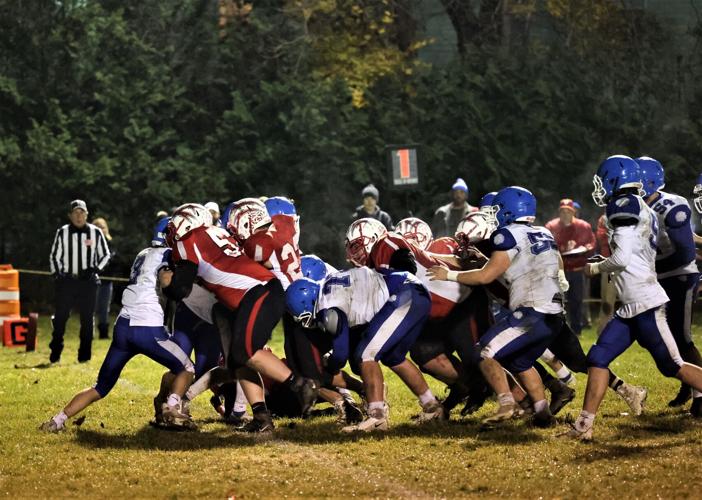 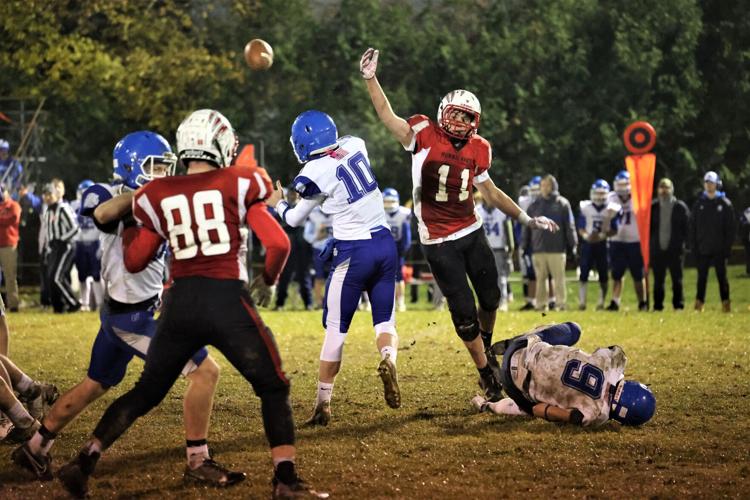 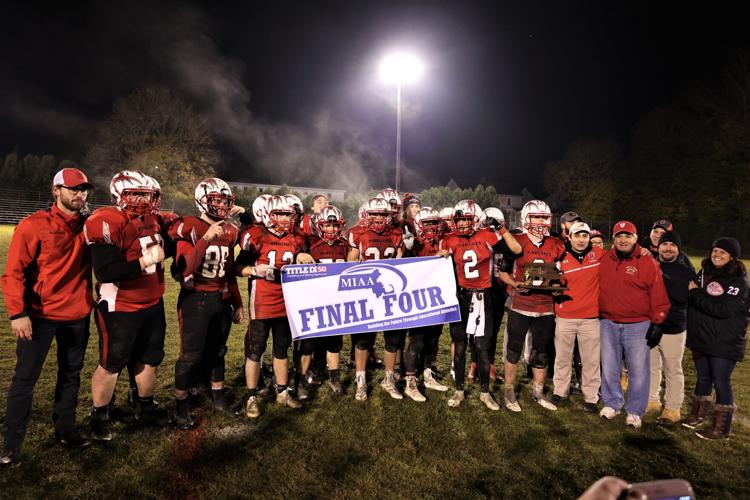 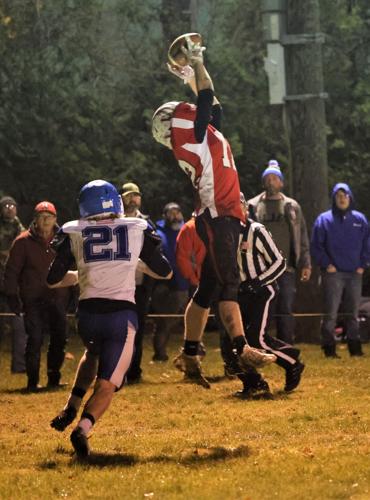 ADAMS — The Hurricanes earned the top spot in the Division VIII state tournament due to their devastating firepower on offense. That same Hoosac Valley football team is now one of the state's Final Four teams in D-VIII because of its defense. 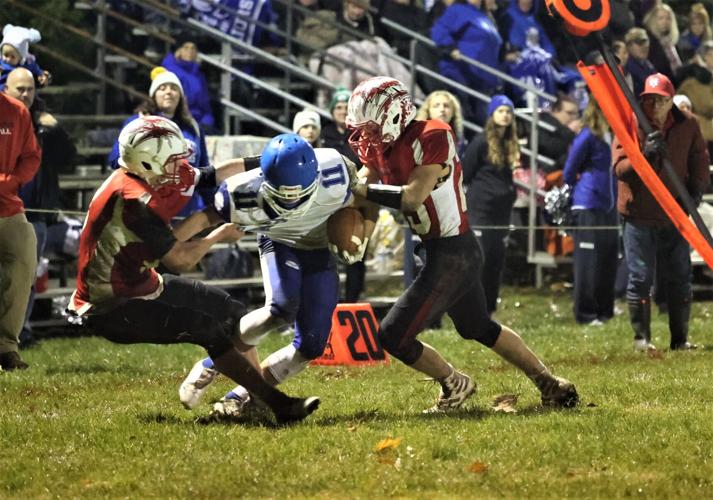 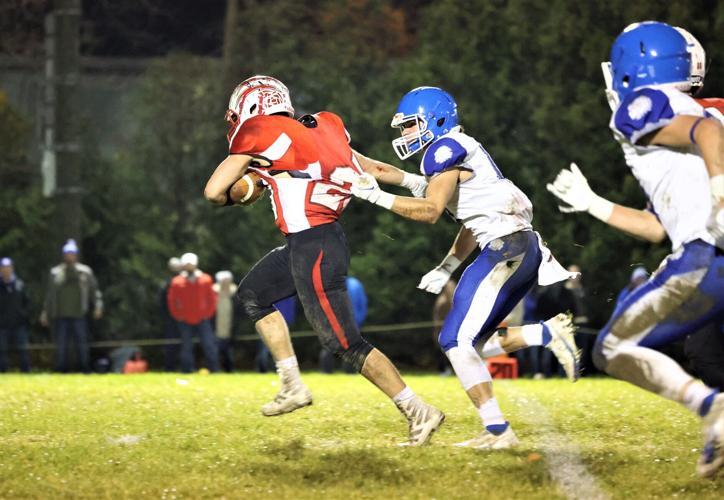 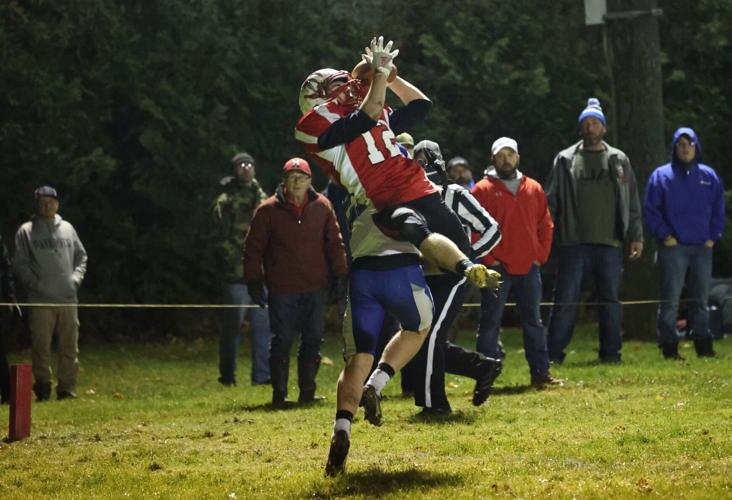 Hoosac Valley's Caleb Harrington comes down with a touchdown pass. 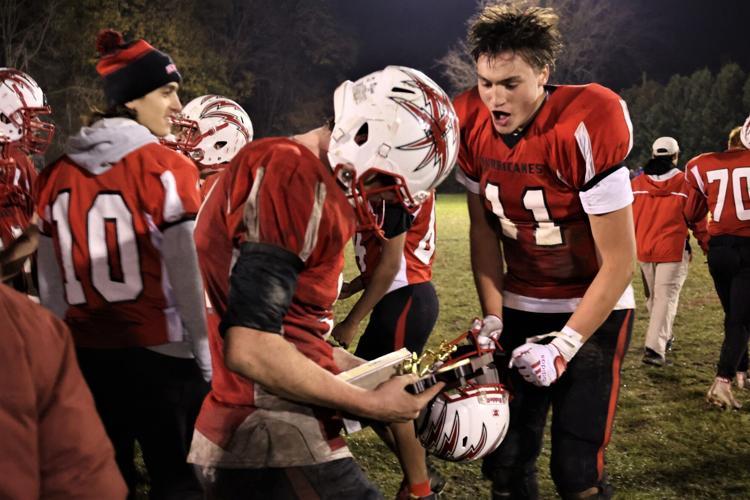 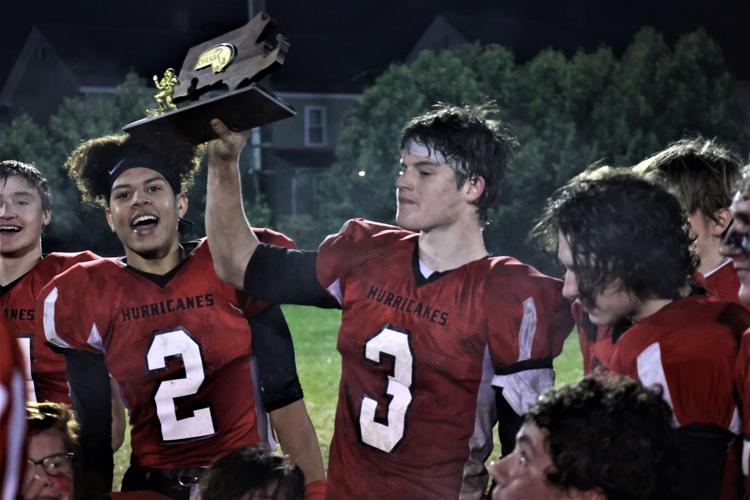 Hoosac Valley's Caleb Harrington comes down with a touchdown pass.

The Hurricanes created two turnovers and held strong on two fourth-down stops in the second half of Friday's 20-13 win over No. 9 Narragansett in the state tournament's Round of 8.

"Football is a game of inches and we have a big line up front," senior tailback Aaron Bush said. "They blocked a hell of a game, every yard was because of them."

Bush carried the ball a season-high 26 times for a game-high 120 yards and two touchdowns on a night where the Hurricanes were in complete control of the trenches.

The senior scored his first touchdown of the game late in the second quarter, capping a nine-play drive with the 5-yard scoring scamper. Bush punched it in, but Caleb Harrington and Frank Field were vital in helping the Hurricanes coast down the field.

Field started the drive with a 20-yard reception and Harrington added another 12-yard reception. Field finished the day with two catches for 29 yards and caused some trouble as an edge rusher.

The Warriors leaned on an outside running attack. The issue, however, stemmed from the fact that Narragansett was unable to wash Field, and senior Carson Meczywor on the other sideline, out of the action and create lanes.

Meczywor finished with four tackles for a loss, forcing the Warriors into a handful of uncomfortable spots. Field had a 4-yard tackle for a loss that forced a drive to stall on fourth-and-4. His return was a welcomed sight after leaving last week's 14-6 win over Lynn Vocational early in the action.

Bush push for six points. Another on the 2-point try. 14-7 Hoosac with 3:24 left in the first half. pic.twitter.com/L3vxtTBlE9

"Frank came out as a precaution last week," Hoosac coach Mike Bostwick said. "I was confident we would get him back this week and I think he'll be even better for next week."

Offensively, Field offered another receiving option for Meczywor, who seems to have something pretty special going with Harrington. The receiver broke free down the right sideline and Meczywor put it on a rope for a gain of 44 yards to end the first quarter.

Bush carried the ball for 43 yards over the next three plays, before the Meczywor-to-Harrington connection found the end zone for the fourth time in three games. The 10-yard touchdown reception had the Hurricanes up 6-0. Harrington caught four balls for 79 yards.

"I don't have to block but I am still there running down the field," Bush said of watching the passing attack go to work. "[Caleb] has been playing great and he shows up when we need him."

Hoosac led 14-7 at the half by running a clean operation. Meczywor completed 4 of 5 passes and while the visitors rushed for over 140 yards in the first half — 72 of them came on a single play. The Warrior offense featured a variety of moving gears before and during the snap. That motion created a lane for Bearett Henderson to glide for a 72-yard touchdown run early in the second quarter. Ryan Nugent's extra point put Narragansett on top 7-6.

The touchdown was sandwiched between Harrington's touchdown reception and Bush's first score.

"I think we're closing in on our peak," Bostwick said. "The guys, whenever I talk, I get more-and-more attention, belief and buy-in. I think that is the difference, it is between the ears.

"I've never seen coaches put in the hours like this [breaking down film] and the players are getting better with that right approach and preparation."

Looking like we may have a Caleb Harrington game on our hands. Already close to 60 yards after a 10-yard TD on third down. Hoosac up 6-0 early in the second quarter. pic.twitter.com/Vf3g0z4lMR

It seemed like almost every Hurricane had a hand in making Friday's win possible. The Warriors started the second half with the ball and the first play was a 1-yard loss after Bush shot out of a cannon. Griffin Mucci recovered a fumble on the next play.

Two big plays shouldered the Narragansett offense, the 72-yard run and an 82-yard reception by Cam Hoey, which set up a 5-yard touchdown run by Zak Ramos, who led the visitors with 78 yards on 24 carries. The Warriors had a shot to tie the game on the extra point, but Kobe Valois had other ideas. The senior got a paw in front of the kick, swatting it to the muddied grass and maintaining Hoosac's lead.

Leading 14-13, the Hurricanes were forced to punt on the following drive. Not only does Meczywor guide the offense under center and play on the team's second level defensively, he is the team's punter.

"He's gritty, gutsy, not your typical quarterback," Bostwick said. "He's a fullback with some quarterback abilities. He is something special, what he lacks in size he makes up with heart."

The senior played the field position game to perfection in the second half, pinning the Warriors at their own 2-yard line late in the third quarter. Shaun Kastner Jr. forced an incompletion as Narragansett went three-and-out. Hoosac took over on the visiting 37 and needed just three plays before Bush broke through a lane and went 20 yards for the touchdown.

Hoosac was forced to punt with just over six minutes on the clock and Meczywor again pinned in the Warriors. Narragansett's drive started at the 8-yard line and the ball made it three yards in two plays before Harrington came down with an interception.

The Hurricanes burned three minutes off the clock, partially due to a crucial 3 yards from Bush on fourth-and-2, before punting the ball away with 150 seconds left in the quarterfinal bout. The Warriors took over on their own 23-yard line and ran 11 plays, including seven incomplete passes, but couldn't break past Hoosac's 29-yard line.  An incomplete pass on fourth down gave the ball away with 21 seconds left, which was perfect timing for victory formation.

"We've been working," Bush said. "We work hard at practice, lifting, doing everything right and are focused. We just have great weeks of practice so it can pay off during games."

In any year prior to 2021, Hoosac Valley would've been crowned Western Massachusetts champs under the lights at Renfrew on Friday. With the new tournament style, they received a "Final 4" banner and trophy. For Bostwick, a longtime member of the Adams and Cheshire community, he is preaching the way he once practiced.

"To carry on the legacy of coach [Joe] Doyle and coach [Joe] Alcaro, they did it right," Bostwick explained. "I've been around them for a long time and they make you want to be better and that is what I want to do for our kids. Carrying that on one day at a time, pushing them to be better players and people."

Narragansett entered with a perfect 8-0 record before falling on Friday. Next up is No. 4 Hull, which defeated No. 12 KIPP Academy 27-20 on a last-minute touchdown on Friday. According to the MIAA, the state semifinals are slated to begin next week and will be played on a neutral field.

A time and place for the semifinal showdown were not available at the press deadline, but Bostwick had another time and place he was looking forward to after the win.

"We showed up with 18 kids eligible to play today," he said. "We'll get a couple back next week and we didn't let it slow us down [this week].

"We make no excuses and I can't wait to get back in the weight room and back on the sleds with these guys — we get at least one more week."