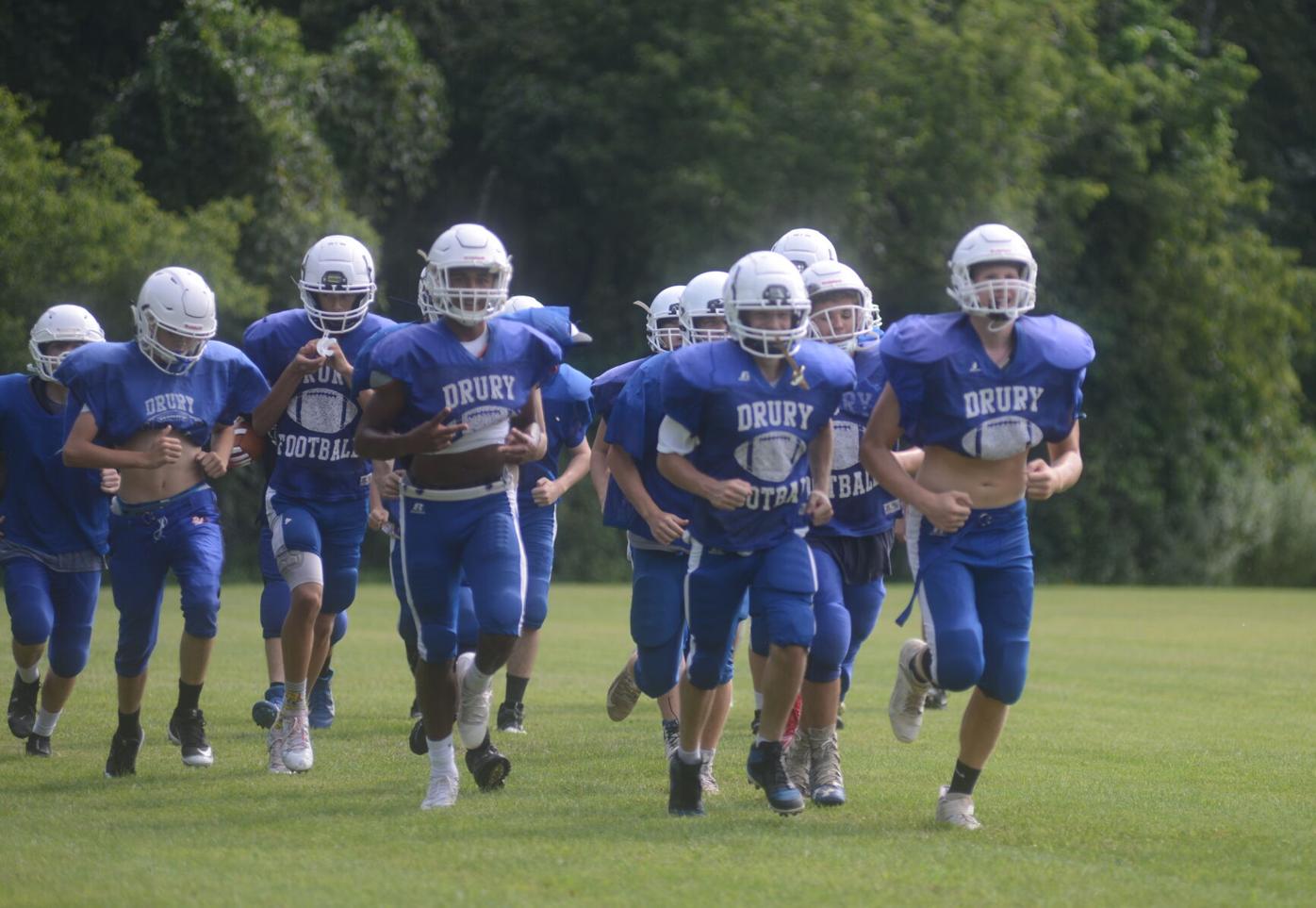 The Mount Greylock and Drury co-op football team marches around the practice field before Thursday's practice behind the high school in North Adams. 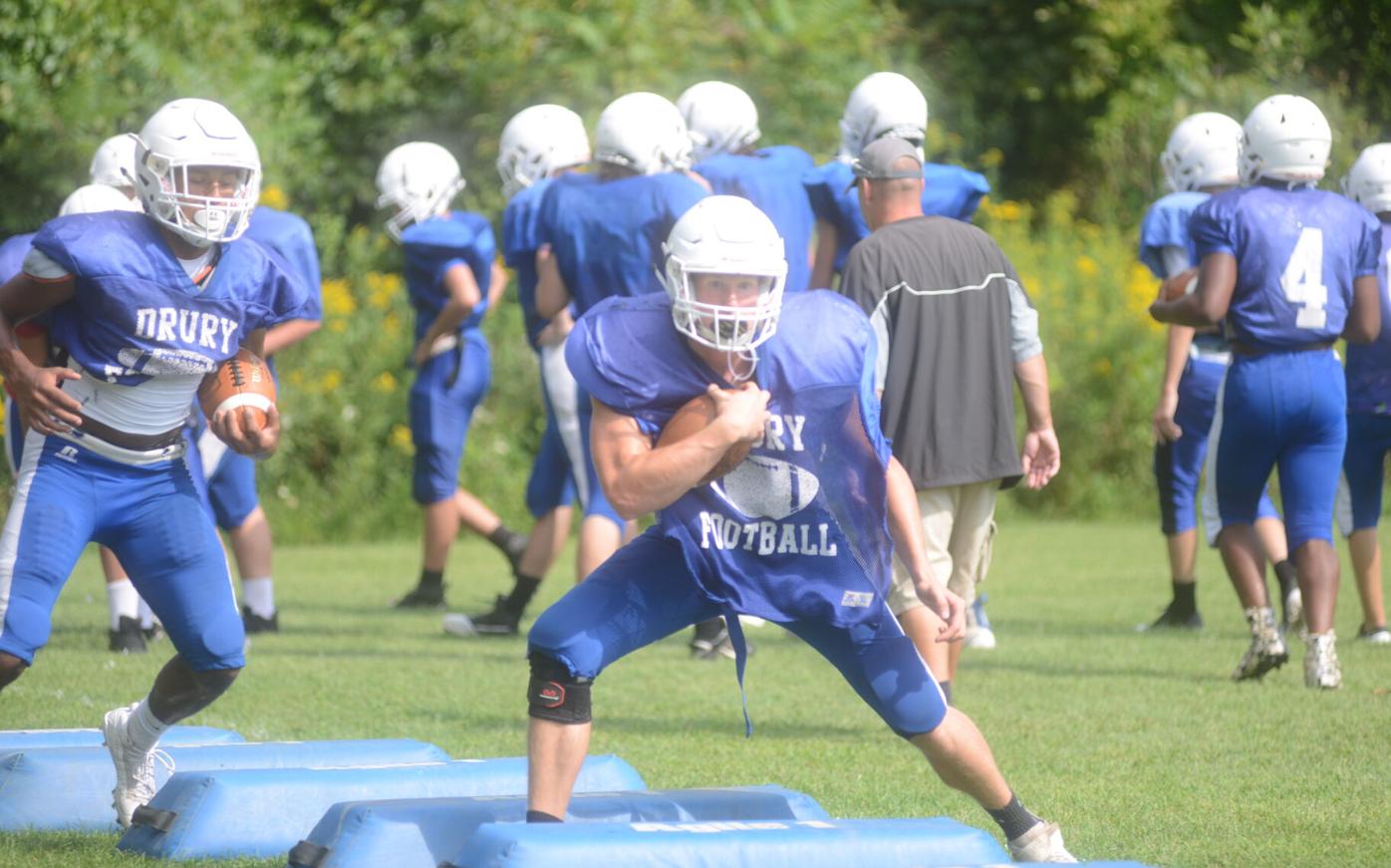 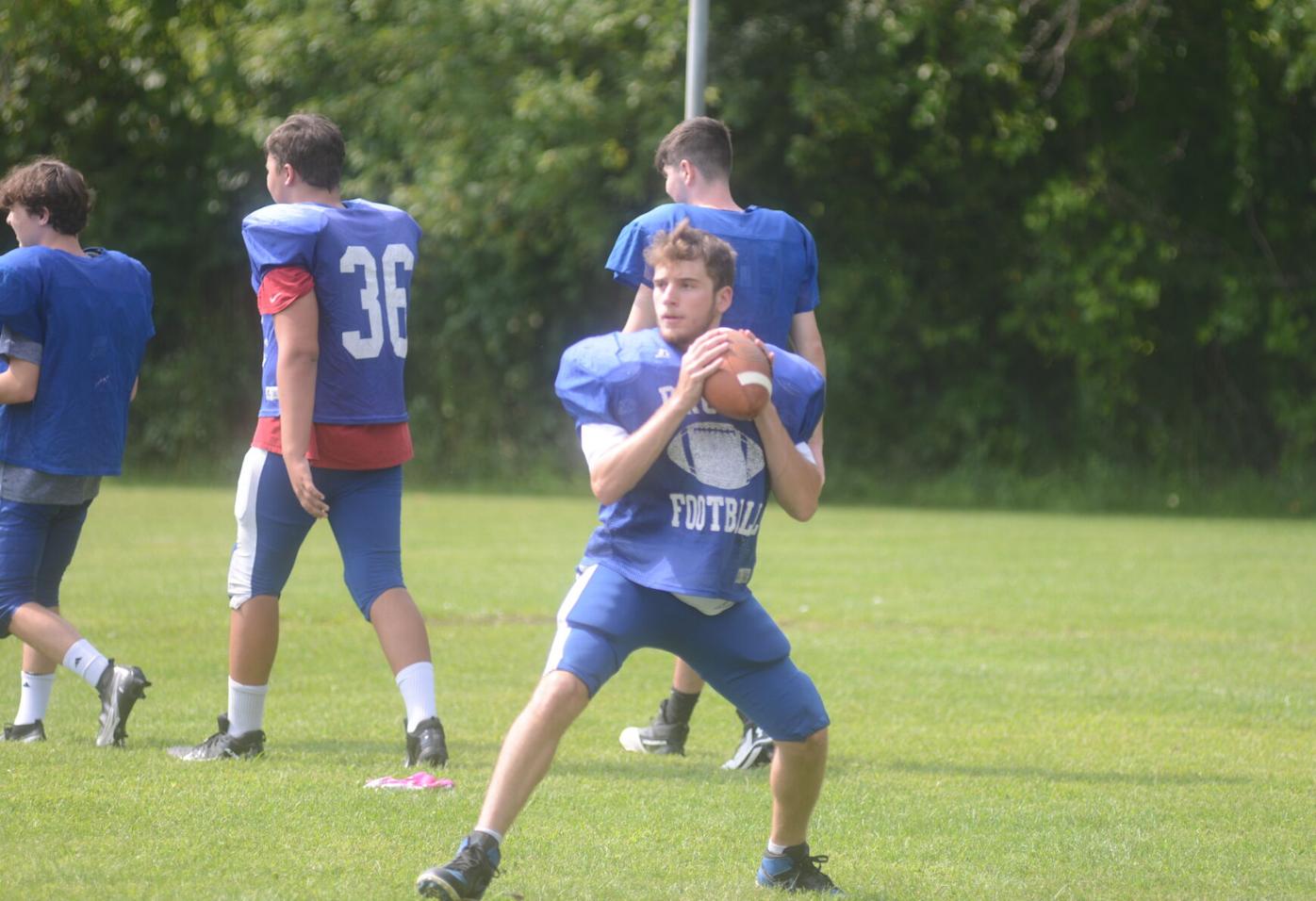 Drury senior Anthony Pettengill scans the field before firing the ball during football practice behind the high school in North Adams on Thursday. 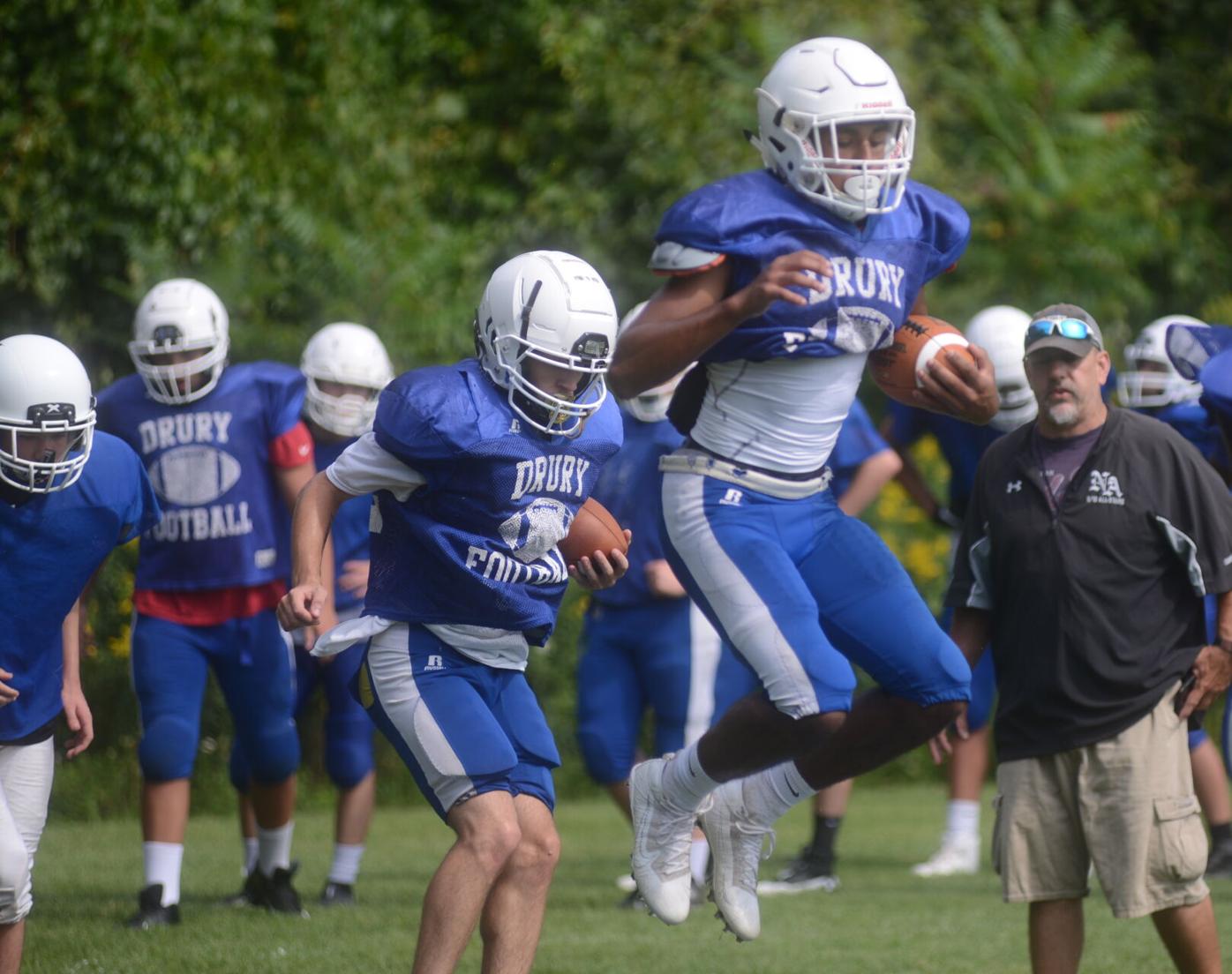 Drury's Louis Guillotte leaps over a bag during a football practice in North Adams. Guillotte had 253 rushing yards in the Blue Devils' season-opening win.

The Mount Greylock and Drury football programs hit the gridiron as a co-op team in 2019. The Mounties and Blue Devils competed separately during the 2020 Fall II season, but will again join forces for the 2021 campaign.

Athletes from Williamstown found out just days ago that they’d be exchanging Mountie red for Blue Devil blue. However, according to the players, that is burying the lede.

“I’m just happy to be playing,” said Trey Lapicier, who played running back and defensive back for the Mounties in the spring. “We had a tough season in the spring and I felt like I missed out on a lot. I am excited to be back here.”

Lapicier played with the Blue Devils in 2019 when the co-op ripped off a five-game winning streak. For the Fall II season, above anything else, it was a success due to the fact that teams had the opportunity to play. With that in mind, Mount Greylock and Drury had the same weakness — which is why the teams unified in 2019 and are again coming together.

“When we first started this spring, we had a rough patch because we were short on guys and had to figure out where everyone can play,” said Drury senior Anthony Pettengill.

Pettengill was Drury’s quarterback in 2020 and JayShawn Moore made the most of a bell cowesque workload at tailback. Drury also rosters Tim Brazeau, a dual-threat at tight end due to his ability to block edge rushers and the speed to beat linebackers in coverage. Additionally, junior Louis Guillotte, who has showcased highlight-level speed since his freshman year, will be a focal point of the team’s backfield.

“[The spring season] built some interest and kept people interested,” said Al Marceau, who has coached the Blue Devils since 2017. “The other thing, a lot of the kids didn’t do much during the pandemic. They came out in the spring and realized they were out of shape. By the end of spring they were in shape and I think they look better this summer because if it. It helped overall conditioning, they all stayed in touch and recruited kids.”

The Fall II season was a learning experience as the Mounties began rebuilding the program. While depth and experience were missing at Mount Greylock, it didn’t take long for the team to recognize its strengths. Sophomore Ben McDonough quickly adjusted to the varsity level in the spring as a freshman, leading the Mountie offensive through the air. McDonough identified his favorite target in tight end, Dom Carnevale. The rising sophomore averaged 12 yards on four catches for Mount Greylock against Hoosac Valley in the spring.

“I heard he can throw the ball really well,” Pettengill said of competing with McDonough. “We’re not fighting for a spot, we’re competing with each other to get better.”

Marceau was thrilled when he heard there could possibly be 20-plus kids playing for Drury. A herd of Mountie athletes, however, wasn’t in the cards until August.

“I heard whispers around Aug. 10,” Marceau said. “I just coach, all those decisions are made above me. It’s such a complicated process because everyone needs to agree.

With additional players comes depth and with depth comes competition.

“I was welcomed here and everyone else was too, we were all excited,” Lapicier said. “Two teams that used to play each other are now playing together, the fact that it has worked out in the past shows something.”

The co-op will play its first regular-season game on Sept. 10 at Athol and kickoff is slated for. 7 p.m.

“By our last game [this spring] against Monument, I believed we found our stride,” Pettengill said. “It was just a bit too late. Coming into the season with those additional guys, we know what we can do and know how to be successful doing it.”