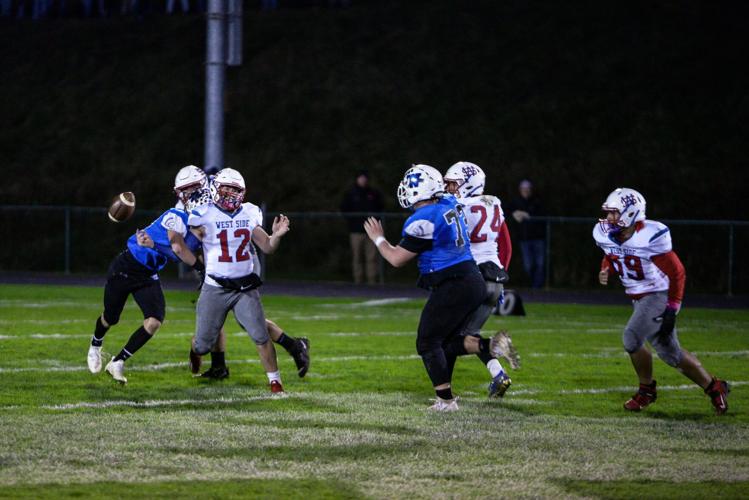 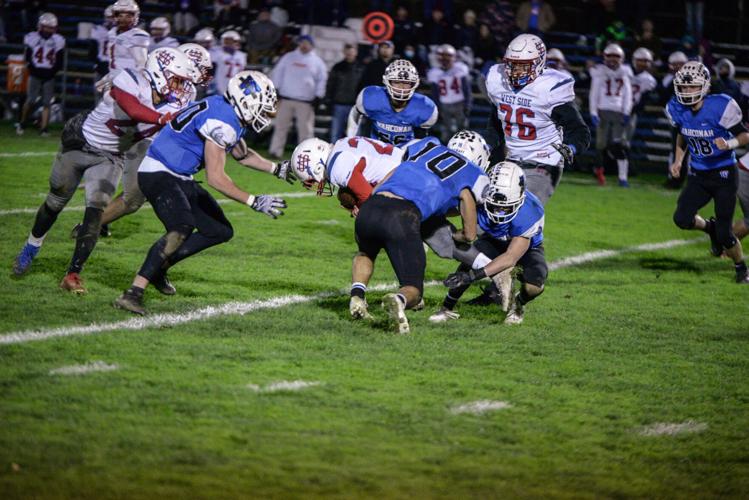 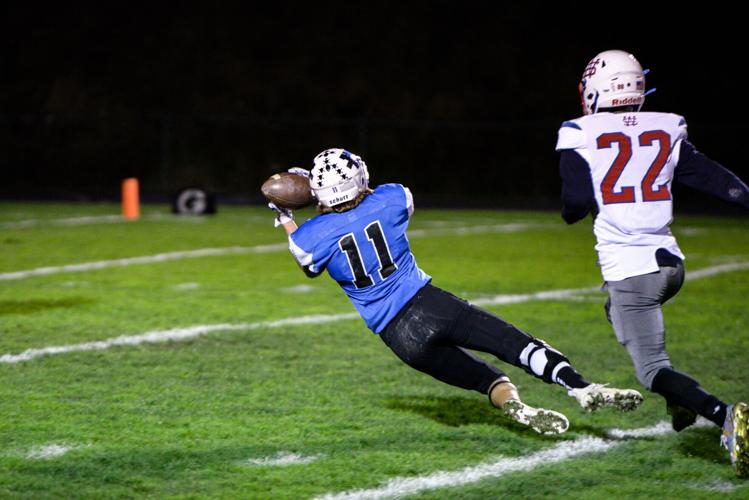 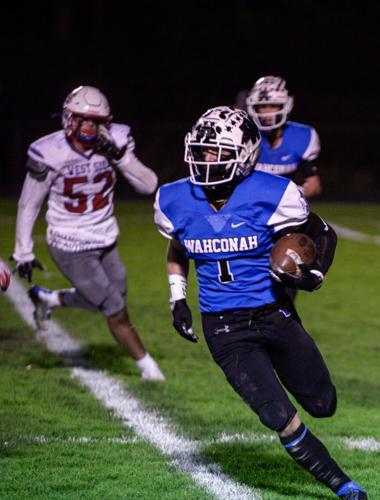 DALTON — One play. A perfect regular season hung in the balance with one final play. 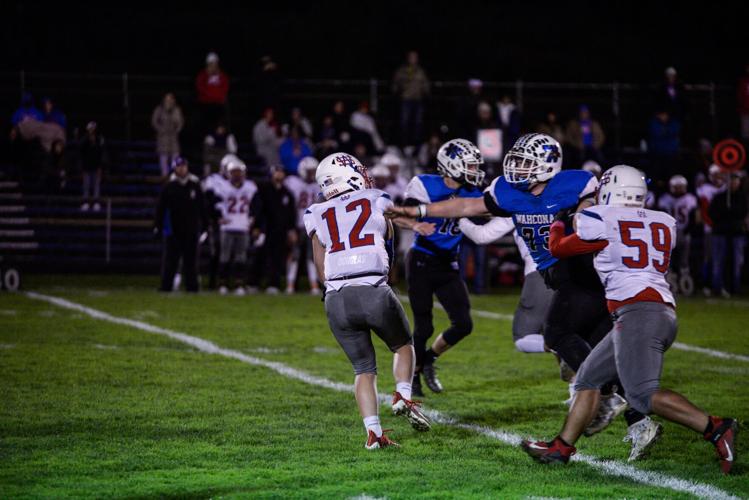 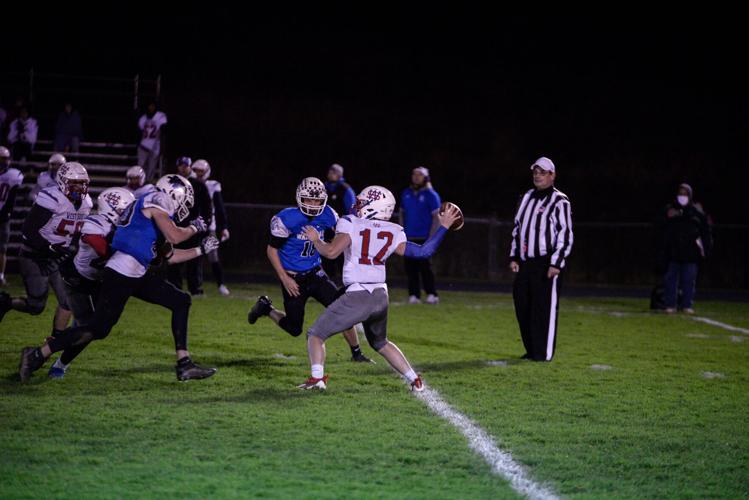 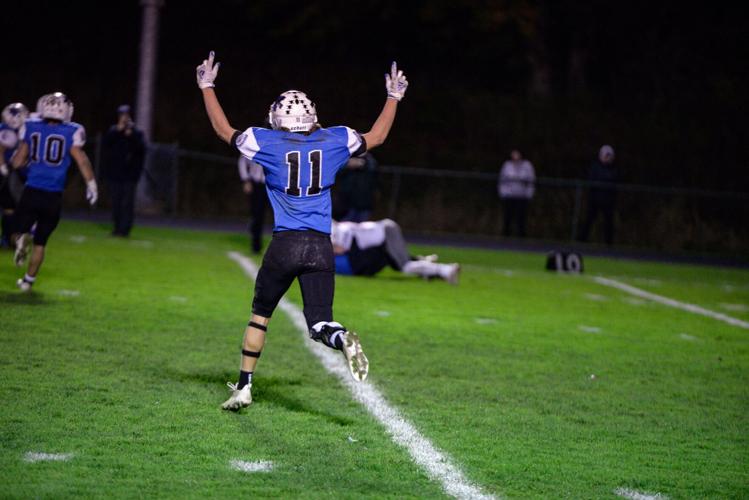 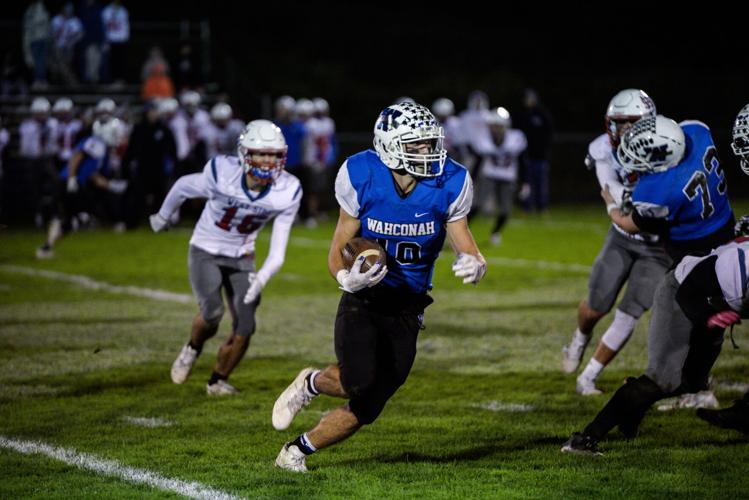 Jonah Smith carries the ball against West Side. 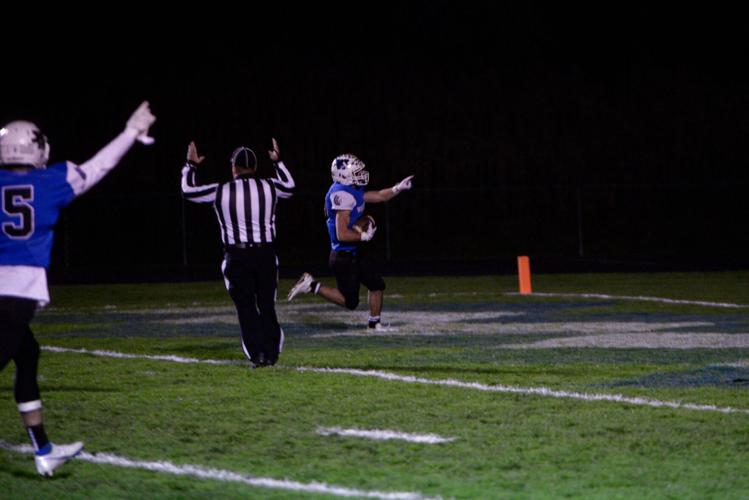 On Friday night in Dalton, Wahconah held on to defeat West Springfield 22-20.

Jonah Smith carries the ball against West Side.

That’s because the Warriors had fought back from a 20-point deficit in the first quarter, and shut the visiting Terriers down for the final three stanzas en route to a heart-stopping 22-20 win Friday night. The win locked up a perfect 8-0 season for Wahconah, it’s first-ever Suburban North championship, and likely the No. 1 seed in the MIAA Division VII state tournament.

“It means the world to us,” Wahconah’s Scott Duma said about finishing undefeated. “We deserve it. Everyone. Thanks to the buffalo. Nothing happens without that offensive and defensive line. This is a statement win. I’m not positive, but I think these kids are Division [III]. We’re Division VII. I don’t care what people say about us. Here in Western Mass., we play real football.”

The Warriors played a lot of ground and pound. They ran 58 plays, 46 of them on the ground. Smith had a stellar night for the Warriors, rushing for 155 yards on 33 carries. That was 55 fewer yards than the Terriers mounted in the game.

In fact, the Terriers had 80 yards in offense in the first quarter, and 120 total yards the rest of the game. That figure did not count the 80-yard kickoff return for a touchdown by West Springfield’s Joey Tangredi.

“Oh definitely,” said Smith, in response to the statement game question. “We’re going to the playoffs.”

It was Smith’s 35-yard touchdown run on the first drive of the second half that tied the game, and Smith ran in the conversion to give the Warriors a two-point lead they would not lose.

But it was that final series that had the standing-room-only crowd in Dalton holding its collective breath.

Wahconah had just held West Side on downs at the Warrior 29-yard line. A defensive facemask penalty moved the ball to the 47, but on the first play, Smith was stripped of the ball and the Terriers recovered on their 49 with 5:55 left, and they hoped to take time off the clock and score.

Methodically, coach Chad Labonte’s Terriers marched down the field. They converted one third-down and two fourth-down plays to keep the drive going. The biggest one was on fourth-and-6 from the Wahconah 35. Stone, a freshman, found Jonny Rosado for 11 yards and a first down at the Wahconah 24.

Evan Villalongo fumbled on the next running play after gaining 5 yards, but the Terriers recovered. The West Side drive seemed to stall on the Wahconah 19, where the Terriers faced third-and-5. Wahconah was drawn offsides and West Side had a first down on the 14.

Wahconah linebacker Ben Noyes tackled Villalongo for a 6-yard loss, forcing West Springfield into passing downs. Stone, who completed his first three passes for 79 yards, had a second-down pass to Brandon Paquette broken up by Duma. A third-down pass for Tangredi was defended by Walton. Then on fourth down, Smith and Walton blanketed Curren, the pass fell harmlessly in the end zone, and the Warriors had their win.

Here is the fourth down stop by Wahconah that beat West Springfield. pic.twitter.com/8BWEExdDw9

“It’s all about mindset. All about confidence,” said Duma, responding to a query about the secondary holding Stone to 5 for 20 in the second half, and only one completion in his final nine passes.

Wahconah’s coach smiled when he spoke about his secondary and how it responded to the challenge of West Springfield’s offense in the second half.

“It was definitely mindset and physicality,” Wahconah linebacker Ben West said. “Our D-line did fantastic getting off blocks and taking up double-teams, which allowed our linebackers to get some pressure on that quarterback."

Things couldn’t have started off more badly for the Warriors if they tried. They won the toss and kicked off, but an interference on a fair catch not only erased a fumble recovered by the Wahconah kick team, but it gave the Terriers the ball on the Wahconah 49.

One play later, Stone hit Tangredi, who broke Brad Noyes’ tackle and went the distance for the touchdown. A failed run on the conversion made it 6-0.

West Springfield made it 14-0, three plays after Campbell went for it on fourth-and-10 from the Wahconah 41. The incomplete pass set up the Terriers for a short drive, capped off by a 2-yard touchdown pass from Stone to Travis Skorubski.

Wahconah answered with a 13-play drive, kept alive by a big first down from Smith, carrying four West Side defenders for 14 yards. Quarterback Ryan Scott’s 1-yard sneak and Smith’s conversion made it 14-8.

Ryan Scott sneaks in from a yard out. Two point conversion makes it 14-8, West Side. pic.twitter.com/VLni8PhWbs

Any momentum vanished when Tangredi took the kickoff at the 20 and streaked 80 yards for the score. West Springfield led 20-8, but instead of cracking, the Warriors responded by shutting out the visitors the rest of the way.

“I just told them I’m really proud of the way they played tonight,” said Labonte, who was a Drury athlete. “I told them we’ve been playing playoff games for five weeks, switching up personnel and finishing it off here. It’s been a long six weeks. They played great. Give Wahconah credit. They did a great job. I think we left a few things on the field tonight.”

Campbell agreed with his players that the win was more than just clinching an undefeated regular season and the Suburban North title. It was also a statement game.

“Absolutely. They’re a heck of a football team and that’s a team that was desperate for a playoff berth,” Campbell said, referring to West Springfield. “That was a Division III team and a real, real good football team. For us to do this and to fight like we did, it’s a statement win. It’s a statement to Wahconah, not to anybody else out there. It’s a statement to ourselves that we can sit there and take a body blow, and take a knockout blow in the first quarter. For our kids to have that resiliency to come back, I’m really proud of them.”

One of the first things learned when becoming a journalist is the inverted pyramid, a story structure rule that places the important informati…

Howard Herman: Looking back on some big moments in sports from the 2021-2022 school year

Eagle sports columnist Howard Herman looks back at some of the more memorable events he witnessed during the 2021-22 school sports season.