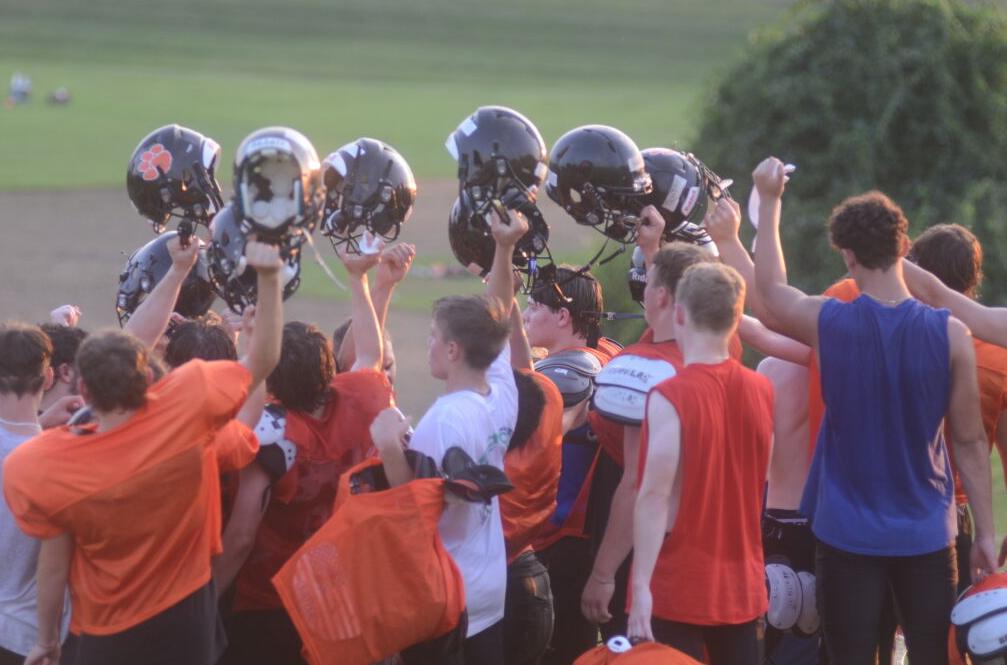 The Lee Wildcats huddle together one last time before finishing practice at the high school last week. 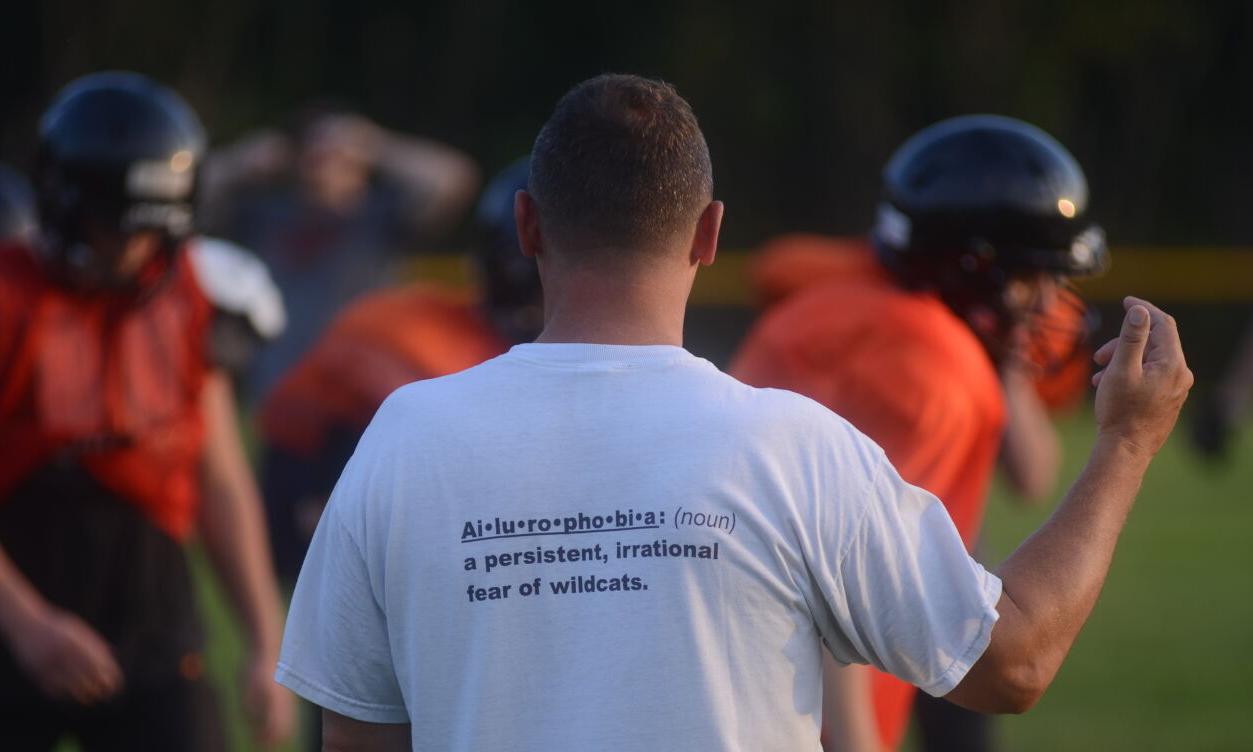 Walking out of the building during the Fall II season in the spring, Greylock Street lacked the energy that was synonymous with the fall in Lee.

“There were some community programs going on, but the campus was dead,” said Thomson, who is entering is 17th year coaching football at Lee. “There is something special about fall on the campus — football, girls soccer, cross-country, volleyball inside — all practicing together, there is an excitement around a new school year.”

The Fall II season freed the caged ‘Cats and while Lee football participated in a handful of games, there was no postseason tournament and the 2019 Western Massachusetts VIII champions were unable to defend their crown.

Pads smacking, whistles blowing, volleyball spikes and soccer ball punts are back to echoing through town with fall sports back on the usual track.

“It was like pressing fast forward,” senior Elliot Winston said, of being back on the field after spring football.

Purcell through the air, Kelley on the ground carry Lee to Senior Night victory over Taconic

Lee’s senior class will have a full plate — especially early in the year. Quarterback Jimmy Purcell, running back Gabe Kelley, receiver Luke Patella and tight end Averin Paradise were some of the team’s departed seniors from the spring.

“We have a lot of new faces at a lot of new places and we knew that would be the case in the spring,” Thomson said. “When you have an older team you can sometimes get right into the nuts and bolts. As a coaching staff, we have to focus on slowing things down to make sure everyone is on the same page.

To replace the talent and leadership of the seven-player senior class, Thomson is looking forward to what his former junior class can do in the quick turnaround.

Cam Tyer and Cam Freeman will take snaps at running back, and Winston is a three-year starter in the trenches on both sides of the ball. 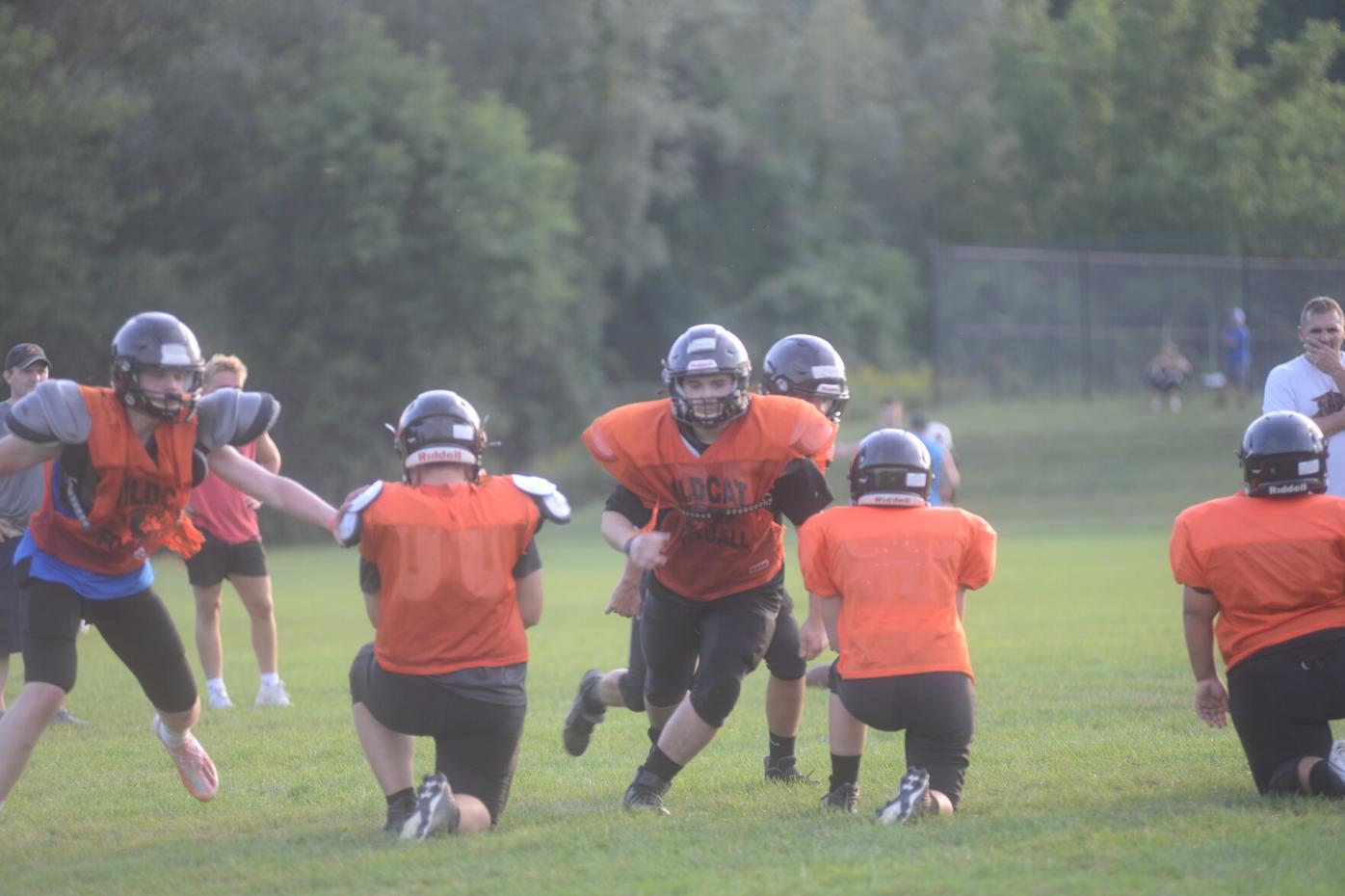 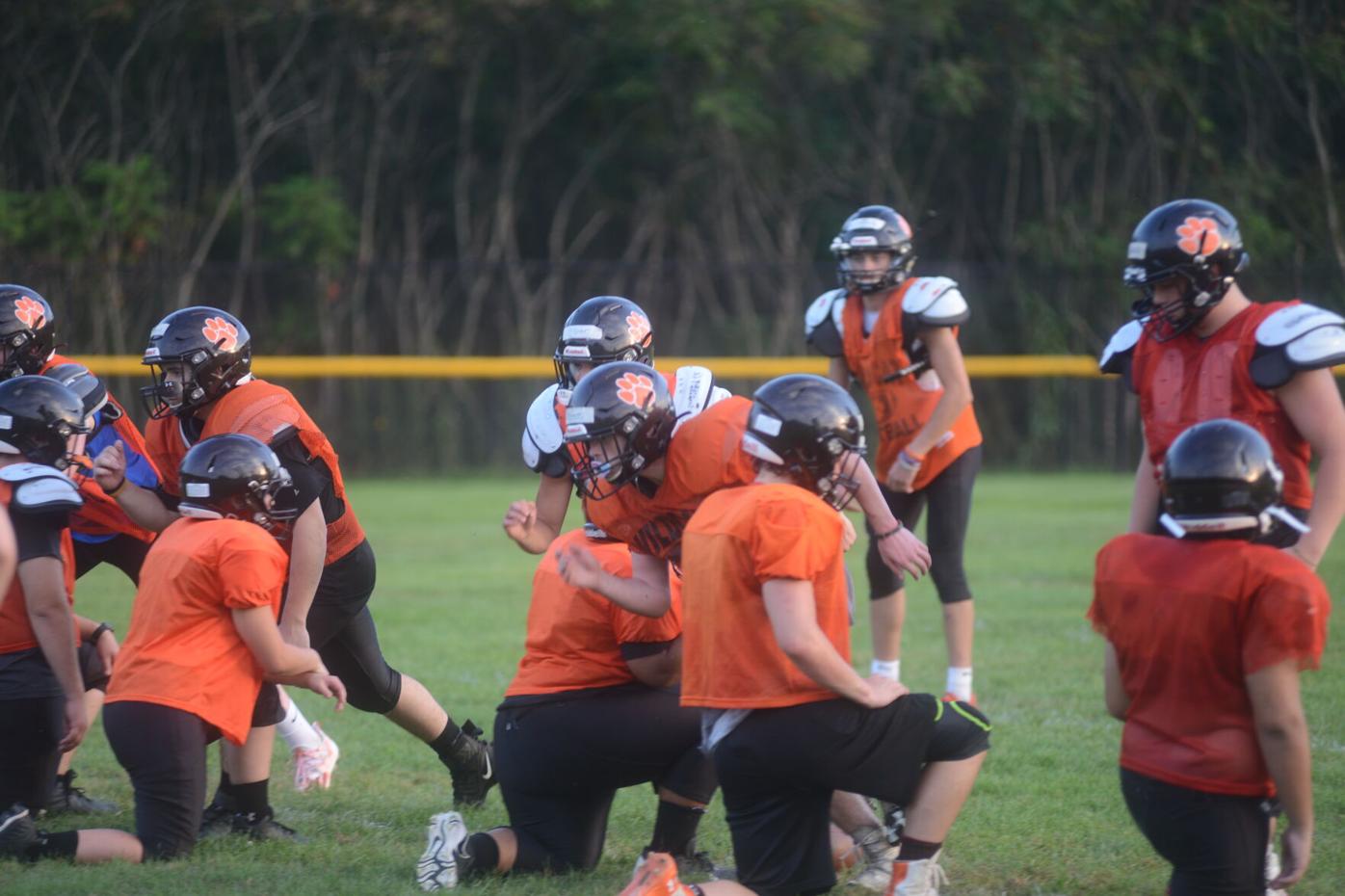 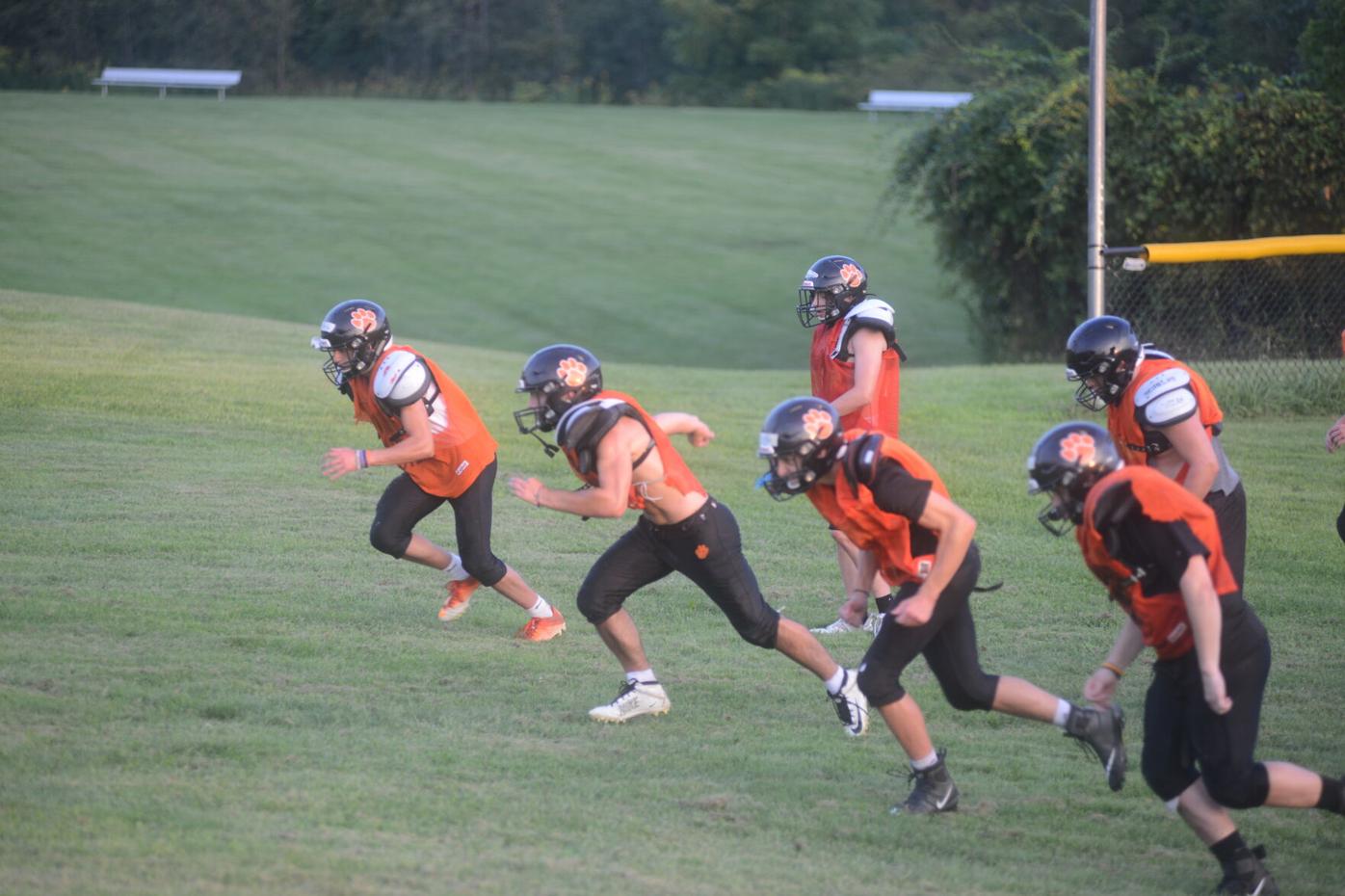 “It is refreshing to get right back into the season,” Tyer said. “It is different, but I like it and it has been fun. I think there is a lot of energy and everyone is in high spirits since there is a full season. There is a lot to be excited about.”

For Winston, he sees a group of underclassmen determined to fill bigger shoes.

“The younger kids looked up to the seniors a lot,” Winston said. “They saw them play, but they also saw them leave and know that a position and an opportunity to lead are both available.

“That gets a lot of the kids working hard and we started to see it in scrimmages.”

“Keep working,” senior lineman Thomas Somerville said of his advice to those looking for a role in the starting lineup. “You’ll get your chance if you put in the work and dedication — coach can see that.”

The dedication expands past the white lines, though. Lee has devoted extra time to the classroom working “chalk talk,” which focuses on learning the language of football. For players like Winston, who are fluent in football, they can serve as additional teachers in the classroom.

“It has gotten to the point where I can guess what coach is talking about when we start doing chalk talk,” Winston said. “You can pick up on what we’re trying to accomplish when you do it each year.”

Western Mass. Division VIII football: Lee gets back to the top with win over Ware

Thomson also leveraged the spring season to get a glimpse of the future. Maguire Roosa and William Thomson, after breaking into the lineup as sophomores, will likely see an expanded workload at linebacker this fall.

Additionally, Tyler Bartini jumped off the tape as a freshman and may be a Swiss Army ‘Cat as a sophomore.

“He is a terrific athlete,” Thomson said. “We’re tinkering to see where he can help us. He is versatile and can be moved around to different places.”

The Wildcats rostered 10 juniors in the spring and enter the fall with 31 players. Lee scheduled two scrimmages as the coaches continue to learn about the roster before opening day. The first was with West Side and the other featured Longmeadow and Franklin Tech. Additionally, the team participated in a co-op practice with Pittsfield.

Lee begins on the season on Sept. 10 at Monument Mountain and to hit the ground running, Somerville believes it starts with the defense after a slow start in the Fall II season.

“We started to peak right in Week 4 — our last game,” Somerville said. “If we can get a few sticks [big hits] here and there we’ll be moving in the right direction.”