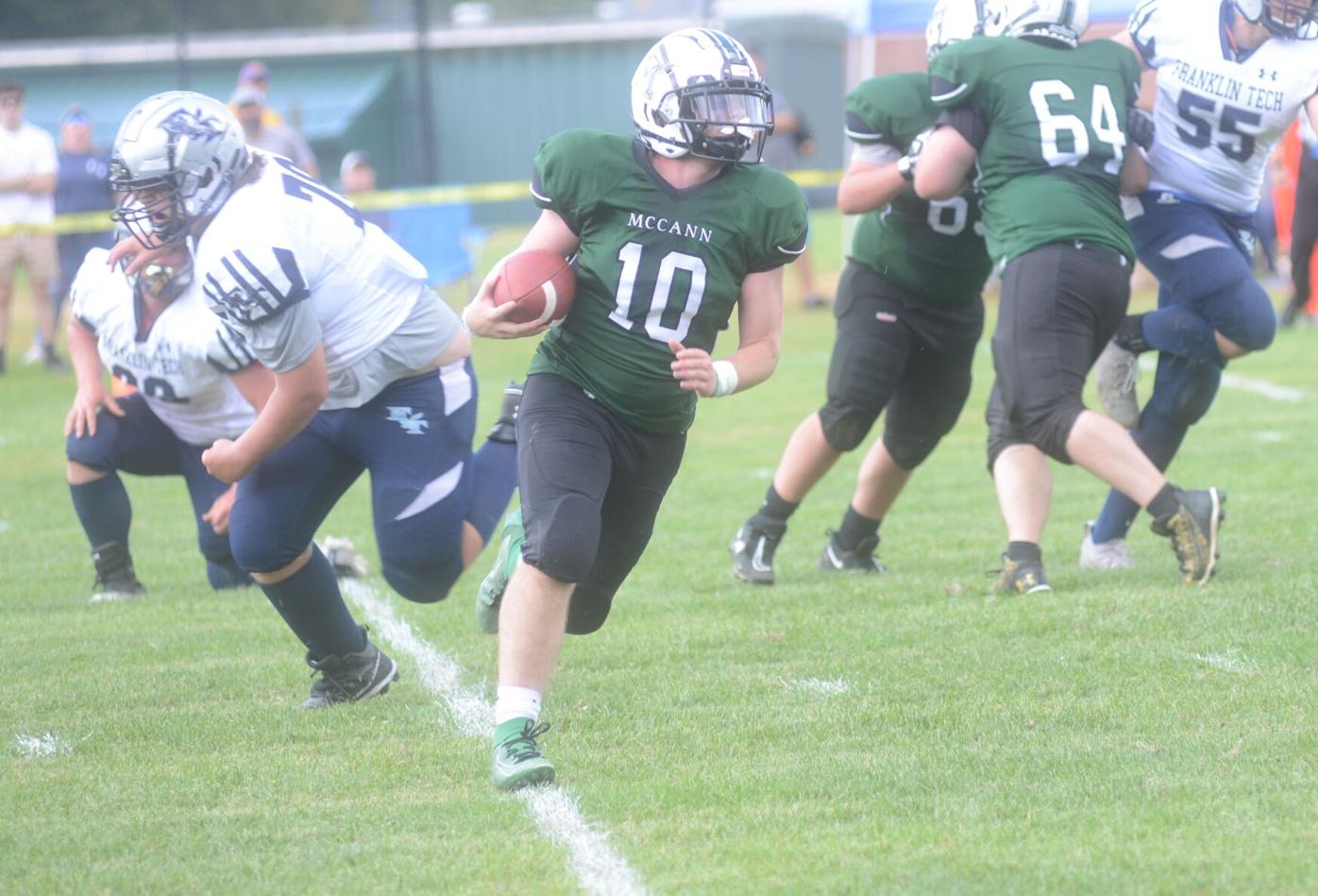 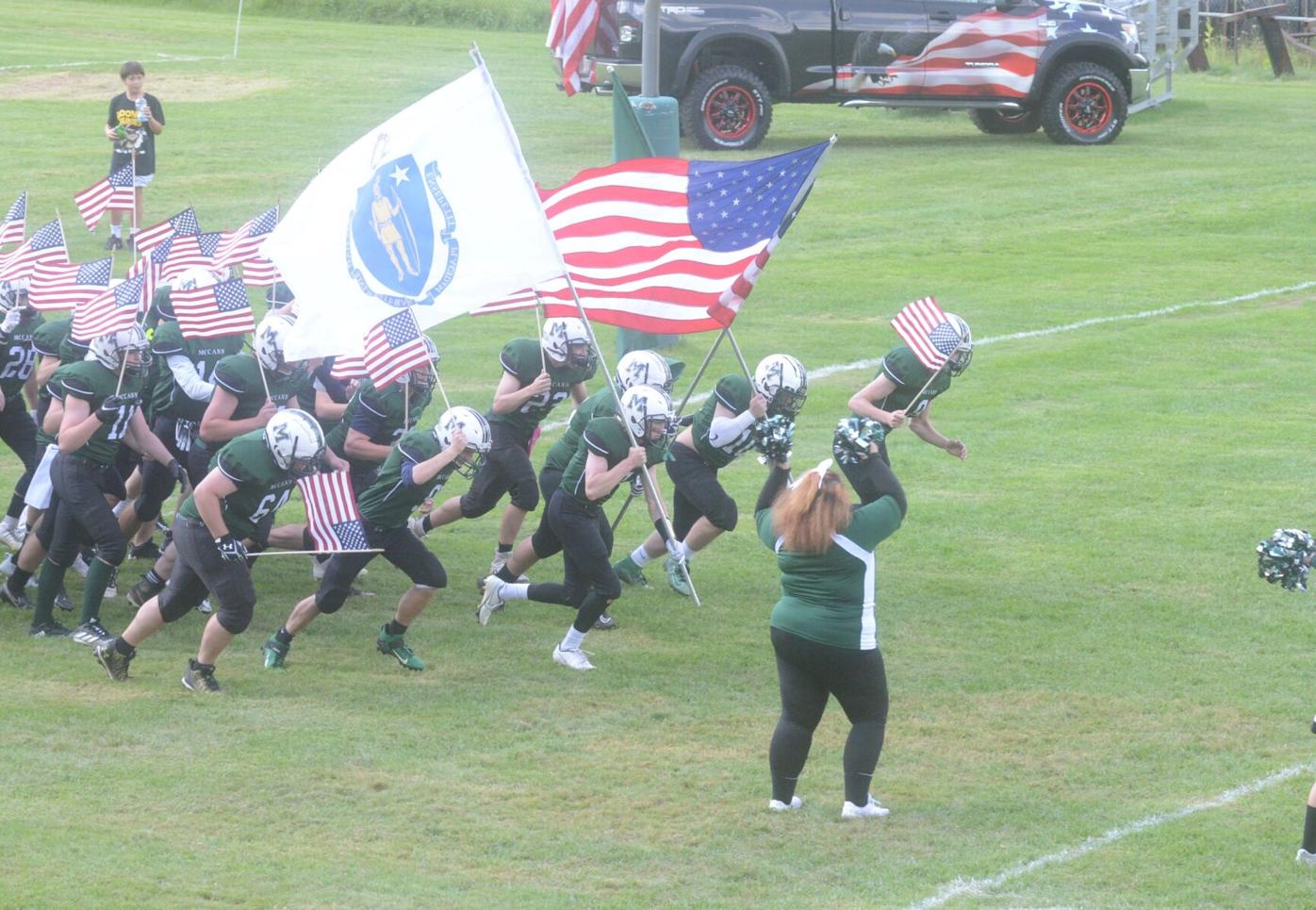 The McCann Tech Hornets storm the field holding American flags on opening day, which is also the 20th anniversary of the 9/11 attacks.

NORTH ADAMS — The Hornets hit the football field for the first time in roughly two years on Saturday.

It didn't take long for McCann Tech to shake the rust off, but Franklin Tech had just enough gas in the tank to complete the comeback, scoring 22 unanswered points in a 22-14 win on opening day.

The Hornets didn't have a season in 2020, which meant that both freshmen and sophomores, or roughly 70 percent of McCann's roster, had never taken a snap at the varsity level. When fourth-year coach Tony Skiffington was asked what stood out to him about his team's return to the football field, he didn't need to think long before answering.

"We're young, we made a lot of young mistakes," Skiffington said. "We have 22 freshmen and sophomores, most of them are playing. They did alright, but there are things we need to learn and clean up.

"We've got to work on blocking and tackling more than anything else."

McCann Tech showed its age early with four penalties in the first quarter, but the team displayed its talent and upside, too. The Hornets received the ball to start the game and opened the season's first drive on their own 44-yard line.

Senior captain Seneca Bolte carried the ball for 13 yards on the first play. It was followed by a false start, but sophomore Aiden Macpherson picked up tough yards running through the trenches, carrying the rock twice for 11 yards on the drive.

Macpherson's first-down run on third and 4 set up Bolte, who scampered 30 yards for the touchdown and 6-0 lead. Bolte was the team's leading rusher with 61 yards on 10 carries. It was a tale of two halves for not only Bolte, but the Hornets in general.

The teams traded turnovers to start the second quarter as McCann Tech fumbled inside Franklin Tech's 40. The Eagles went for it on fourth and 7 from their own 48 and Bolte was in the face of Tomasi, forcing an intentional grounding call on the play. 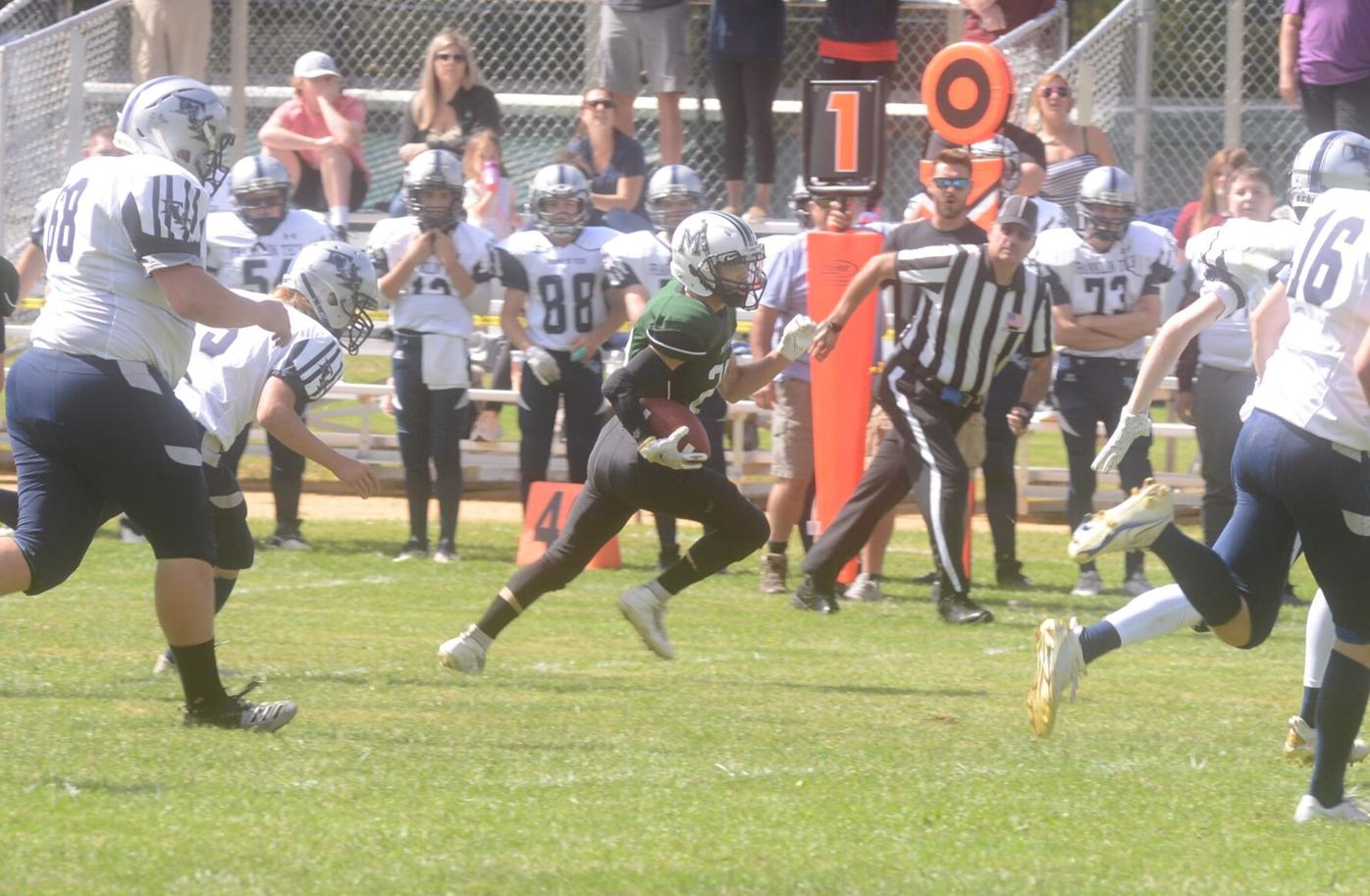 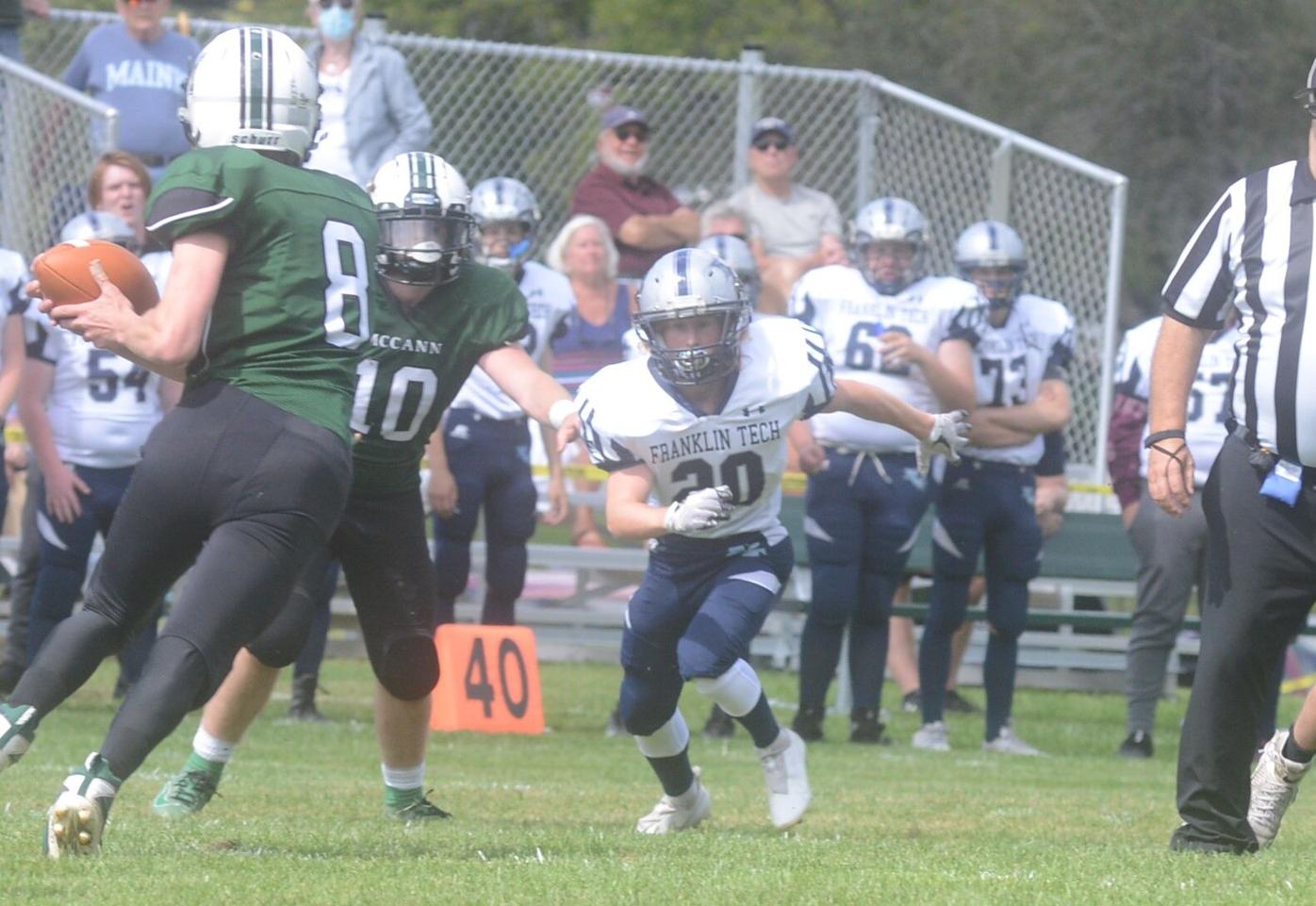 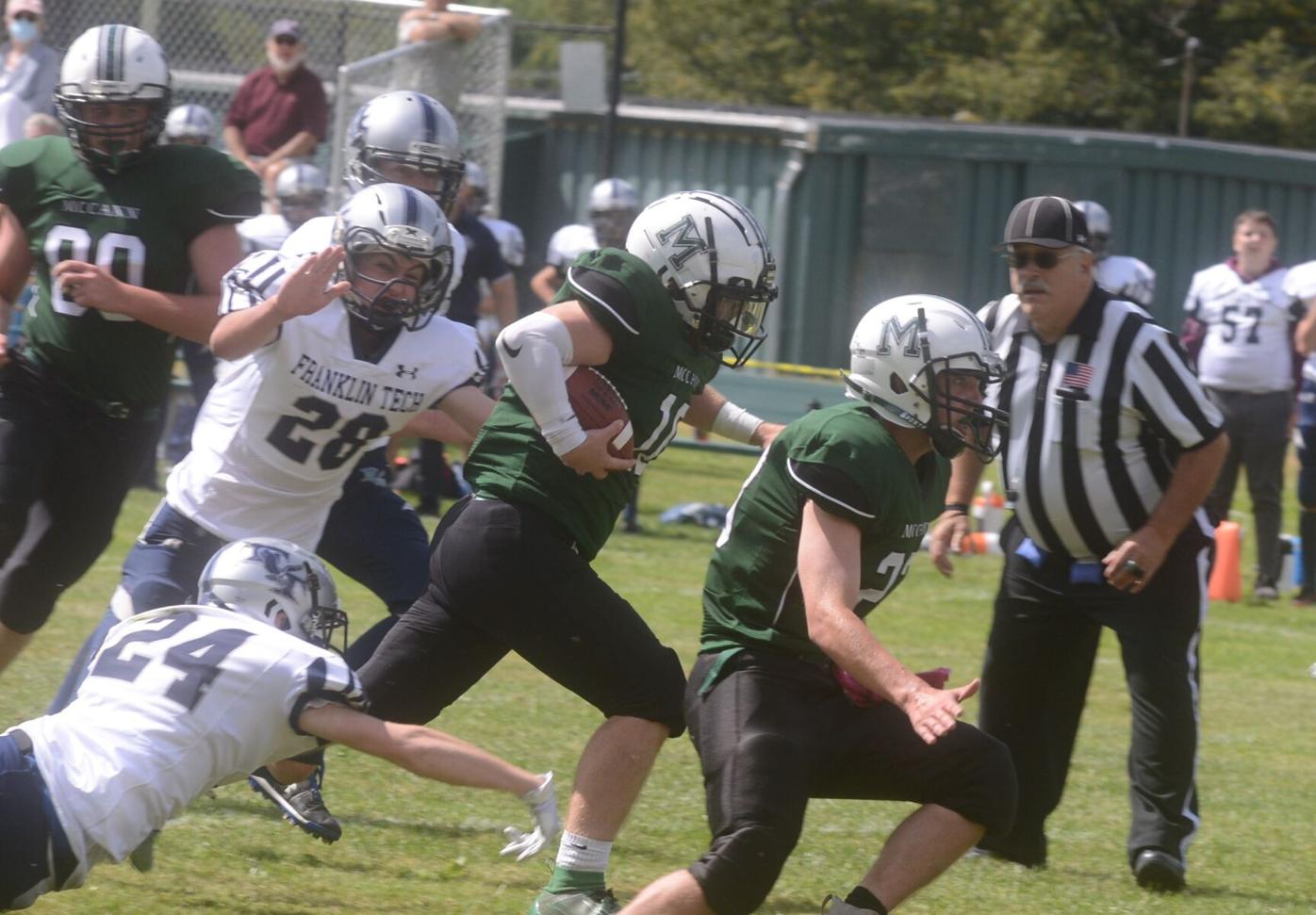 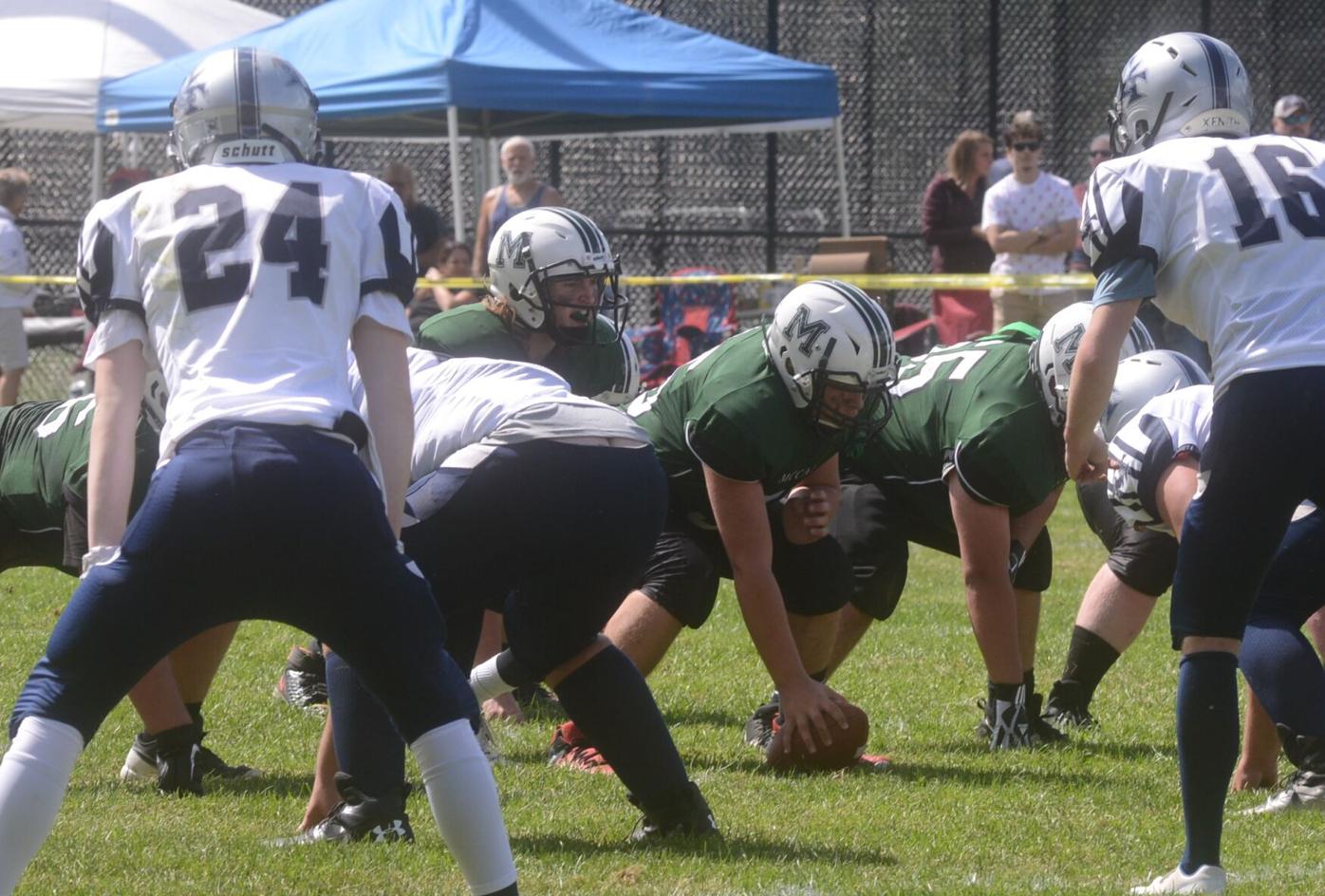 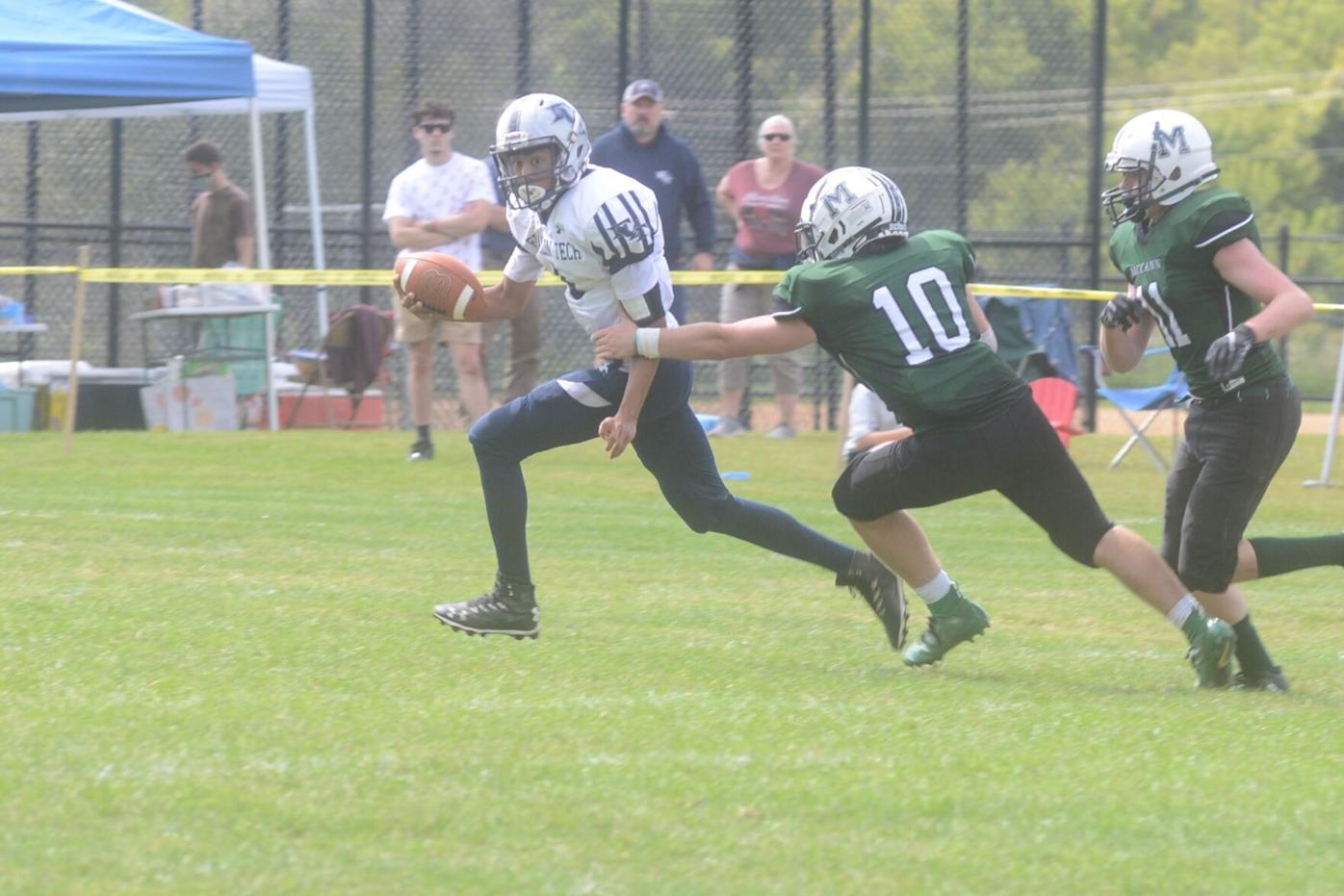 The Hornets quickly took advantage of the turnover, going 24 yards on four plays, ending with Troy Wnuk spinning through a crowd and into the end zone. Seth Farnsworth connected with senior captain Jason Knapp after he put a serious move on a defender before breaking out toward the pylon for the 2-point conversion. The Hornets were cooking, up 14-0 with six minutes left in the first half.

Troy Wnuk rumbles in for six, 2pt good and McCann leads 14-0 with 5:37 left in the first half pic.twitter.com/4ayBt8aqzC

While Tomasi felt the heat early, he turned it up near the break. He escaped pressure on a 12-yard completion and ran for five yards as the Eagles went 62 yards on 10 plays before finding the end zone with 51 seconds left in the half. Freshman Josiah Little was starting to find his groove, rushing four times on the drive for 26 yards and a touchdown. His day finished with 61 yards on 15 carries as Franklin averaged 4.2 yards per carry on the ground.

Little started the second half with a big return and the Eagles set up shop on the McCann Tech 45-yard line. The drive eventually ended with a one-yard touchdown run by Tomasi, but the Hornets held on the two-point try and maintained the lead at 14-12.

The teams traded turnovers before the Eagles found themselves driving inside the McCann Tech 30 early in the fourth quarter. Franklin Tech went for it on fourth and 2 on the McCann 6-yard line, but Wnuk was there to stand up Tomasi and end the threat.

McCann took over with eight minutes left, but the Hornets' backs were against the wall, pinned inside their own five. McCann Tech found itself needing two yards on third down but instead went back a yard. The train began falling off the tracks.

Franklin Tech blocked the punt and went 25 yards while sapping roughly four minutes of clock before punching it in. A strong kickoff had the Hornets pinned inside the 10 again, which allowed the Eagles to pin their ears back and get to the quarterback for a safety.

The Eagles controlled the clock from the start and did enough to absorb the early blows delivered by the Hornets. Franklin Tech's rushing attack kept the chains and clock moving, controlling the ball for nearly 30 of the game's 48 minutes. In fact, the Eagles were on offense for nearly 16 minutes in the second half, compared to just eight minutes for the Hornets.

It wasn't the way McCann Tech wanted to return to the football field and Saturday's game showcased the mistakes a young team can make, but also provided a glimpse of the possibilities in North Adams as the Hornets continue to tighten the ship.

McCann Tech will play under the lights at Mahar next Friday. Kickoff is slated for 7 p.m.