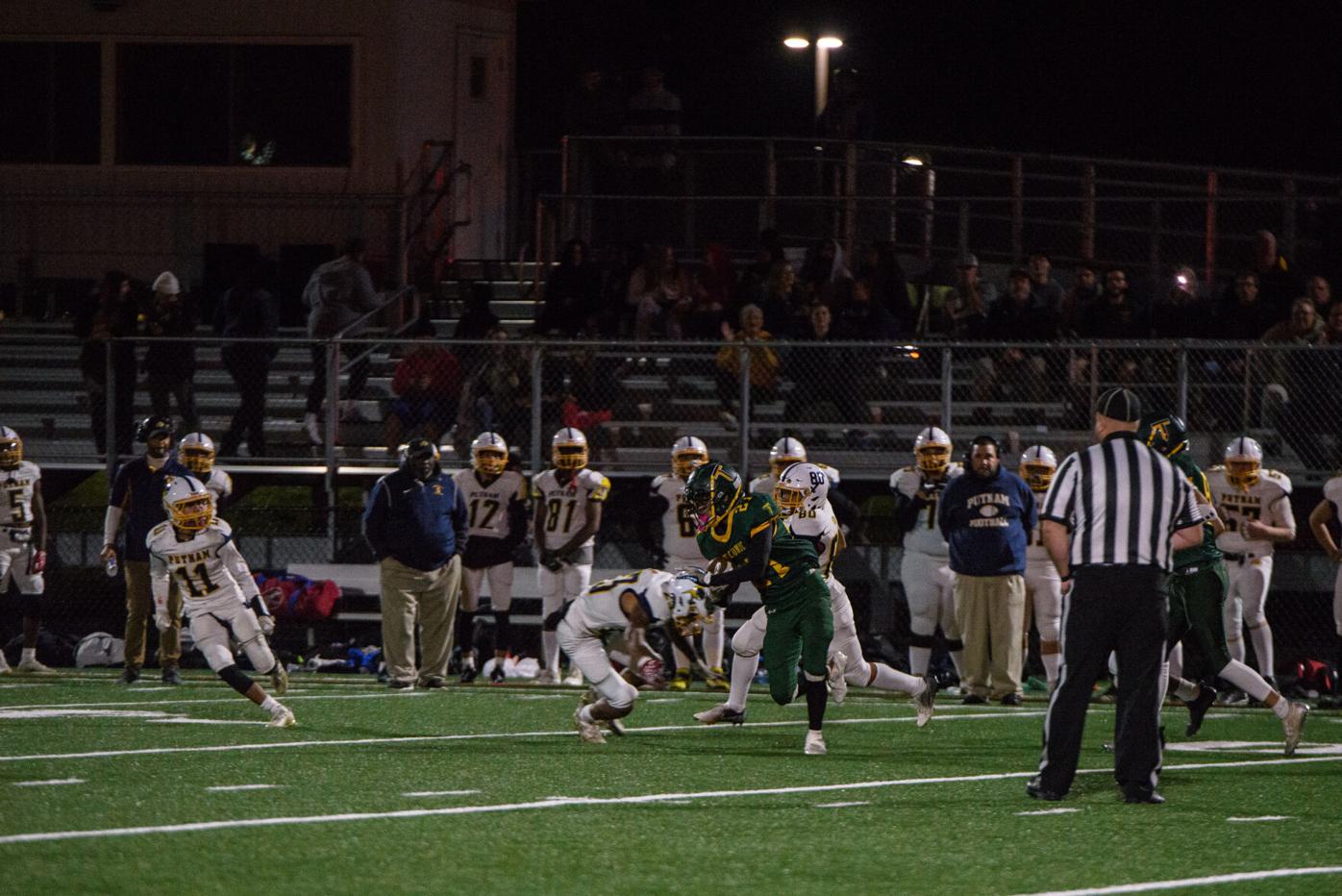 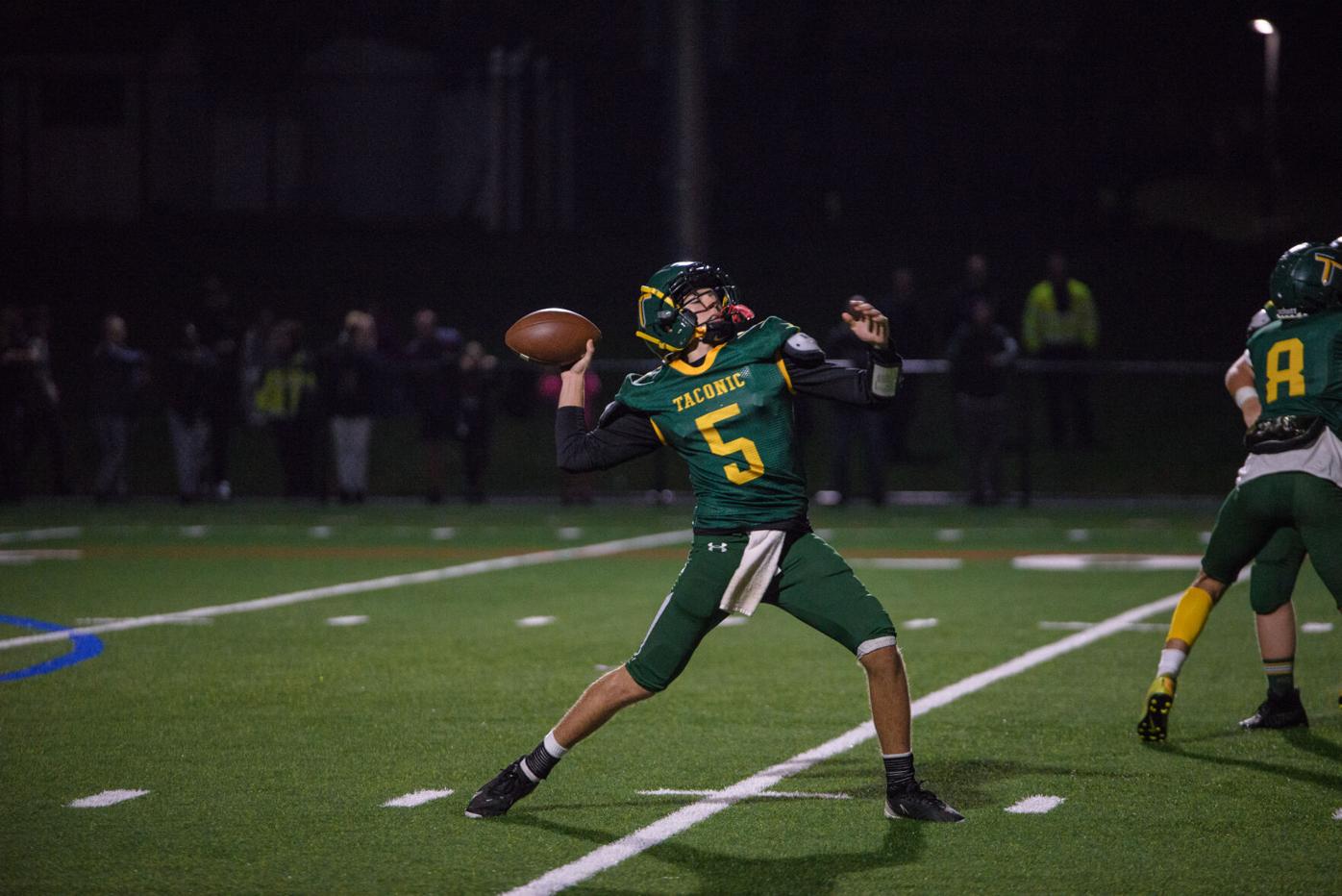 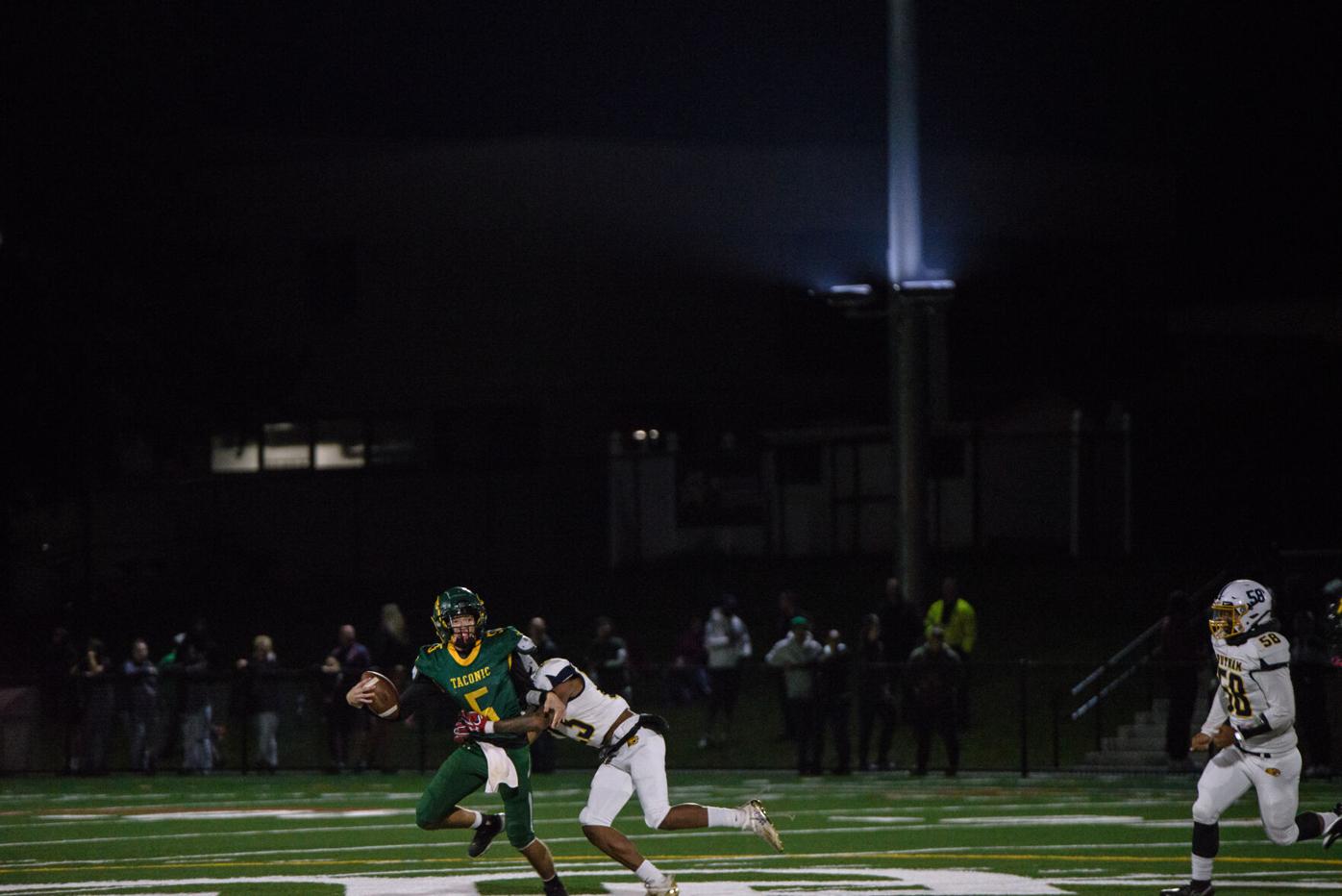 PITTSFIELD — Over 100 plays were run under the lights of Berkshire Community College on Friday and when it was all said and done — Taconic entered the win column for the first time this season.

The Green and Gold battled with Putnam for nearly three hours, before earning a 24-14 victory, the first win under coach Jermaine Sistrunk. 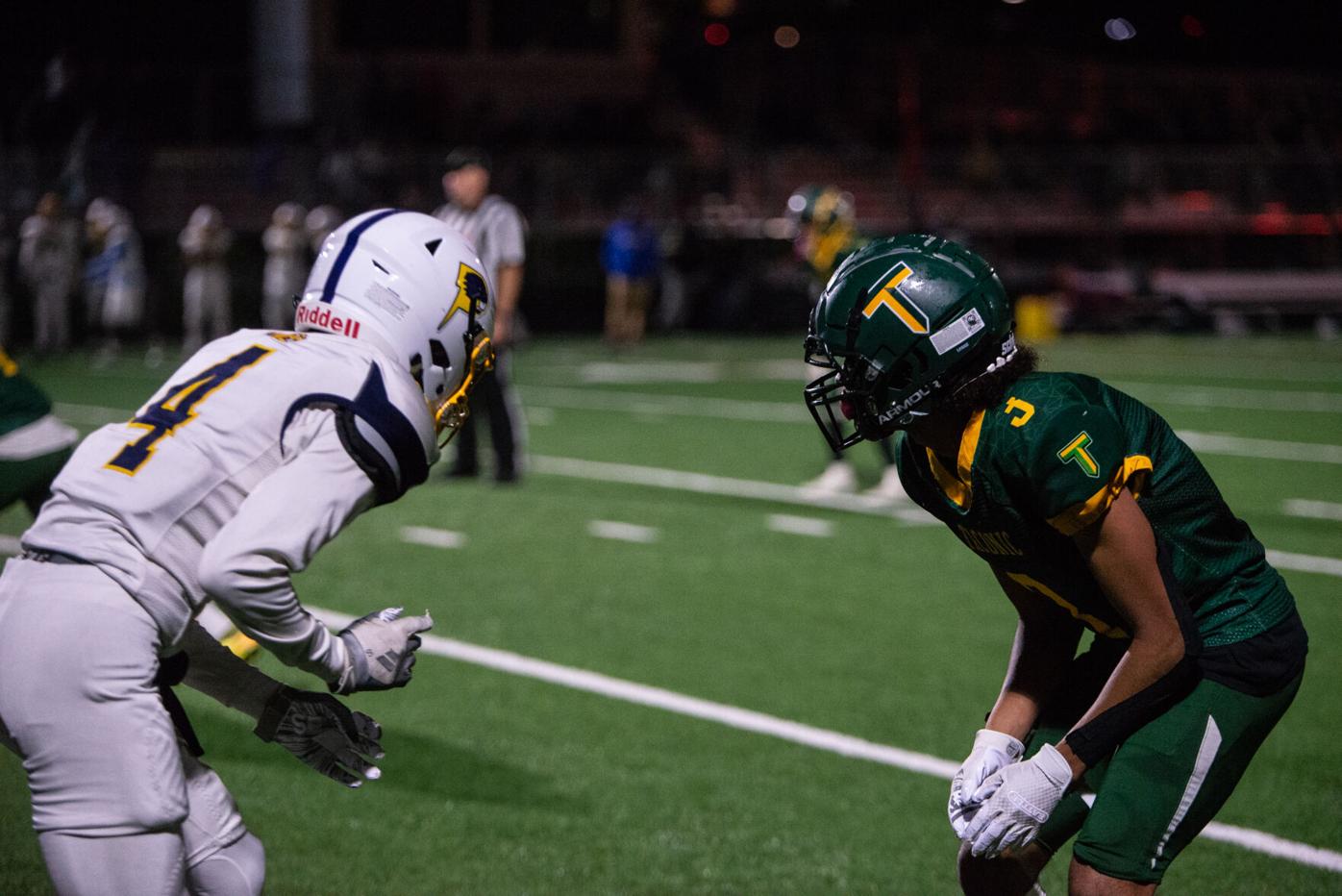 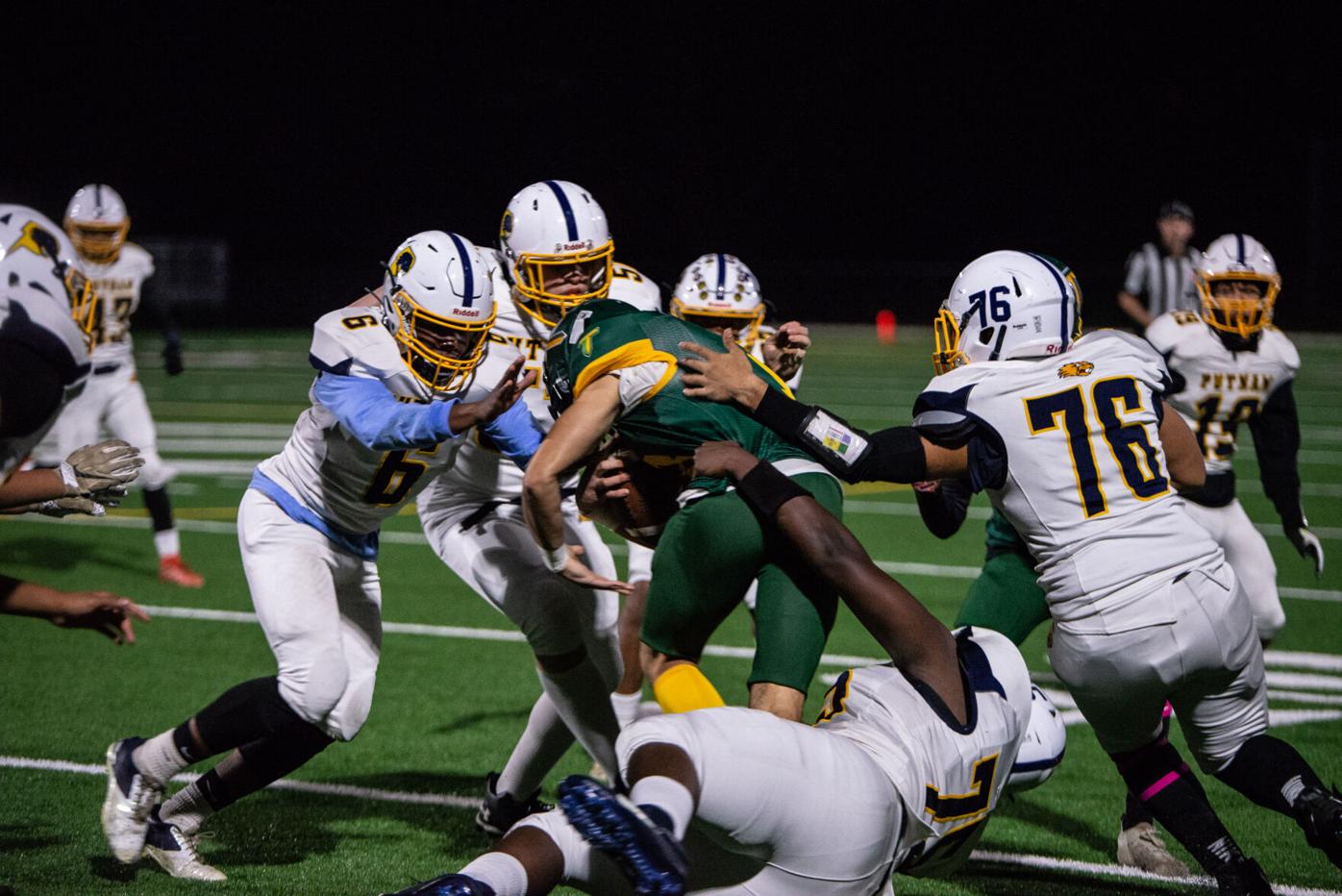 The Putnam defense surrounds and brings down a Taconic ball carrier.

The Putnam defense surrounds and brings down a Taconic ball carrier.

“You get the monkey off the back with the fist win,” Sistrunk said. “We had a great week of practice, the guys really worked their butts off.”

Quarterback Matt McIntosh brought a side of magic to the table on Friday with two touchdown passes — and a 26-yard 2-point conversion.

McIntosh took a shot down the field on the opening play and it came up just short. Dez Merced then carried an end-around 27 yards, but a sack derailed the drive.

Putnam took over on its 25 and Sean Harrigan took the ball away three plays later with an interception around Taconic’s 20-yard line.

Harrigan made a man miss on a 7-yard screen pass and Dazyear Moore pushed Taconic inside Putnam’s 20 with 8 yards on two carries.

McIntosh connected with freshman Ryan Burchard for 18 yards. The following play, McIntosh scrambled to his right and flicked a ball into the corner of the end zone where three Putnam players stood firm — but that wasn’t enough to keep sophomore tight end TraQuan Hall from plucking it for six.

Magic McIntosh took over on the 2-point try. A fumbled snap had the junior scrambling 26-yards away from the end zone and he fired a YOLO-shot that went through Merced’s hands in front of the goal line — and into the a hands of Caesar Santos, who was sitting in the end zone.

Taconic’s following drive featured a heavy dose of Moore, who closed with 103 yards on 10 carries. With 6 minutes left in the first half and a silent start of the second quarter — Harrigan was due for another highlight.

The Green and Gold faced a fourth-and-3 from Putnam’s 3-yard line. McIntosh, moving to his left, was pushed back to the 20-yard line and was forced to throw off his back foot — but he got it high enough to gave Harrigan a shot.

The Taconic wideout leaped over two defenders to make sure the play was ending with six points. Taconic’s well-balanced offense was good enough for a 14-0 lead at the half.

“In the first half we were aiming to try to throw the ball against these guys and then we wanted to get our bull [Moore] going, he had a great game on the ground today,” Sistrunk said. “When you have that [balance] you can do a couple different things.”

While the Beavers reached the end zone twice in the game’s final 4 minutes, the Taconic defense dominated for the game’s first 44.

Cazmere Stein forced a turnover on downs with a pass breakup on Putnam’s first drive out of the half. Jake Hall recovered a fumble on the following Beaver attempt and the junior was just getting started. The visitors began the next drive on their own 3-yard line.

With backs against the wall, Hall and James Kastrinakis pummeled the Putnam back through the back of the end zone for a safety. Jymair Scott blocked a punt and Kastrinakis met Hayden Strassell in the backfield for a sack late in the fourth quarter.

Merced put the game away with a 15-yard scamper for 6 and Taconic’s four-game losing streak was put to rest. It hasn’t always been easy, but the process is beginning to pay off in Pittsfield.

“Building from the ground up and getting these guys to believe in our system, our plays and having each other’s back,” Sistrunk said. “They did that today and this is a great moment for me. It’s emotional with everything else that has happened so far this season, but I am so proud of my boys, so extremely proud.”

Playing in the trenches can be thankless at times, but Sistrunk recognized just how impactful Taconic’s front has been of late.

“I’ve been beating them up,” Sistrunk joked, “my line has shown up in the last two weeks and I’m exceptionally proud of them.”

Taconic will take its money and run to Szot Park next week to play Chicopee. Kickoff is slated for 6 p.m.

For full coverage of Berkshire County high school football in your inbox each Sunday, subscribe to The Huddle newsletter at BerkshireEagle.com/newsletter.