Coaches now have time to learn their student-athletes, while players can better decode their job inside the white lines. Yet, a sense of urgency looms over the football field neighboring Taconic High School.

Tuesday marked the second day of installs as the Green and Gold creates an offensive attack. Meanwhile, the coach Jermaine Sistrunk’s crew has a tri-team scrimmage slated for Saturday.

“The talent dictates the offense,” Sistrunk said. “It should be a lot of fun and the guys are liking the plays, they feel like it’s what the offense should be.”

The Fall II season was Sistrunk’s first campaign coaching Taconic. A full-length summer and training camp has helped the second-year coach tailor an identity founded on his team’s strengths.

“It is the coach’s job to learn the kids,” Sistrunk said. “Having more time to get some continuity with them, they can see that all of us coaches have our hearts in this and they start to buy in a bit more.” 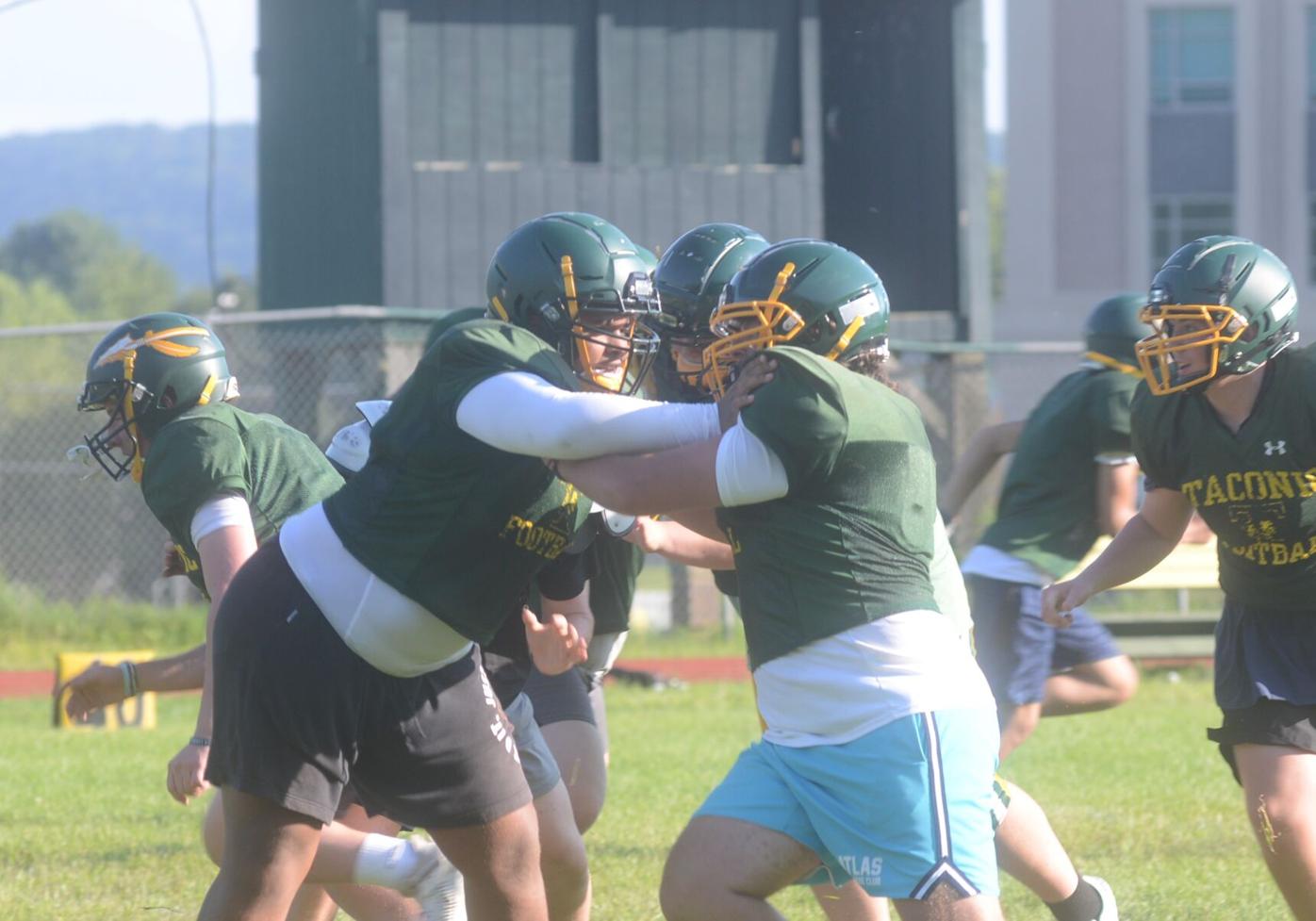 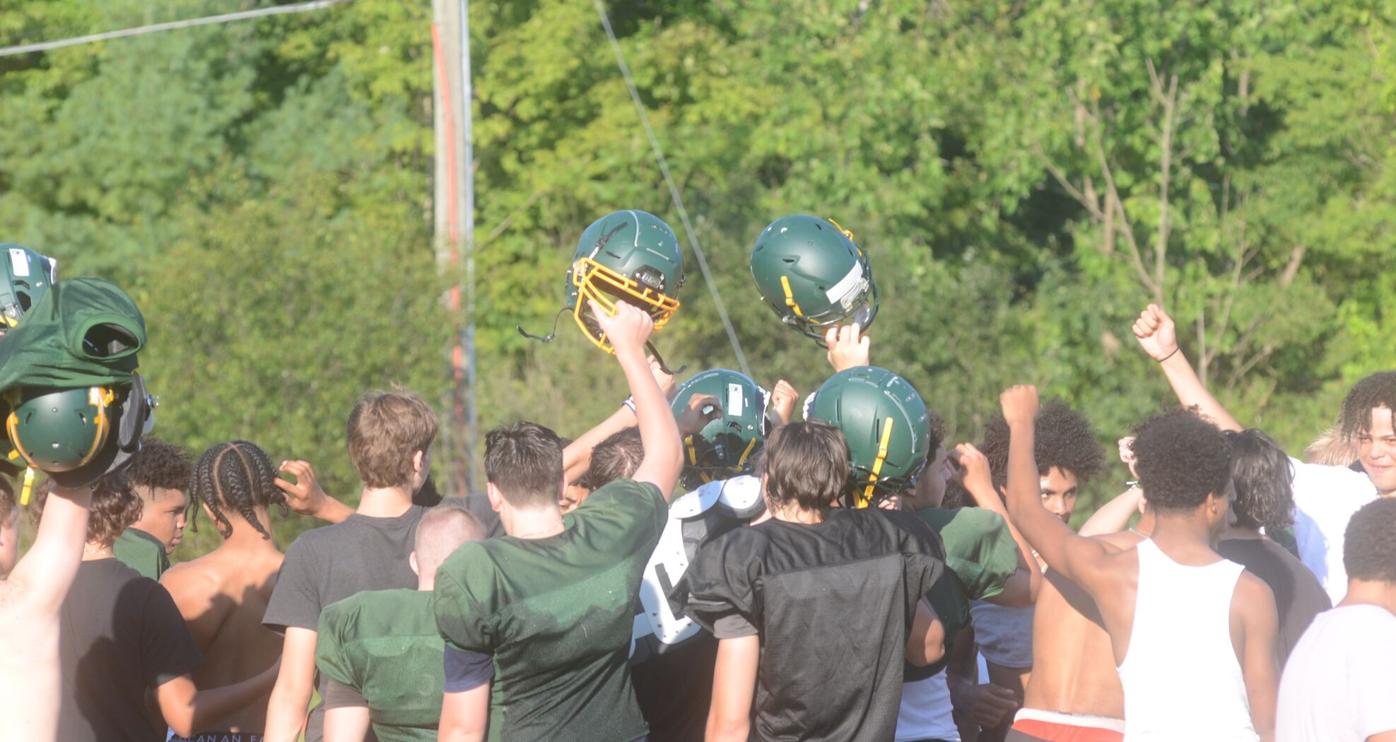 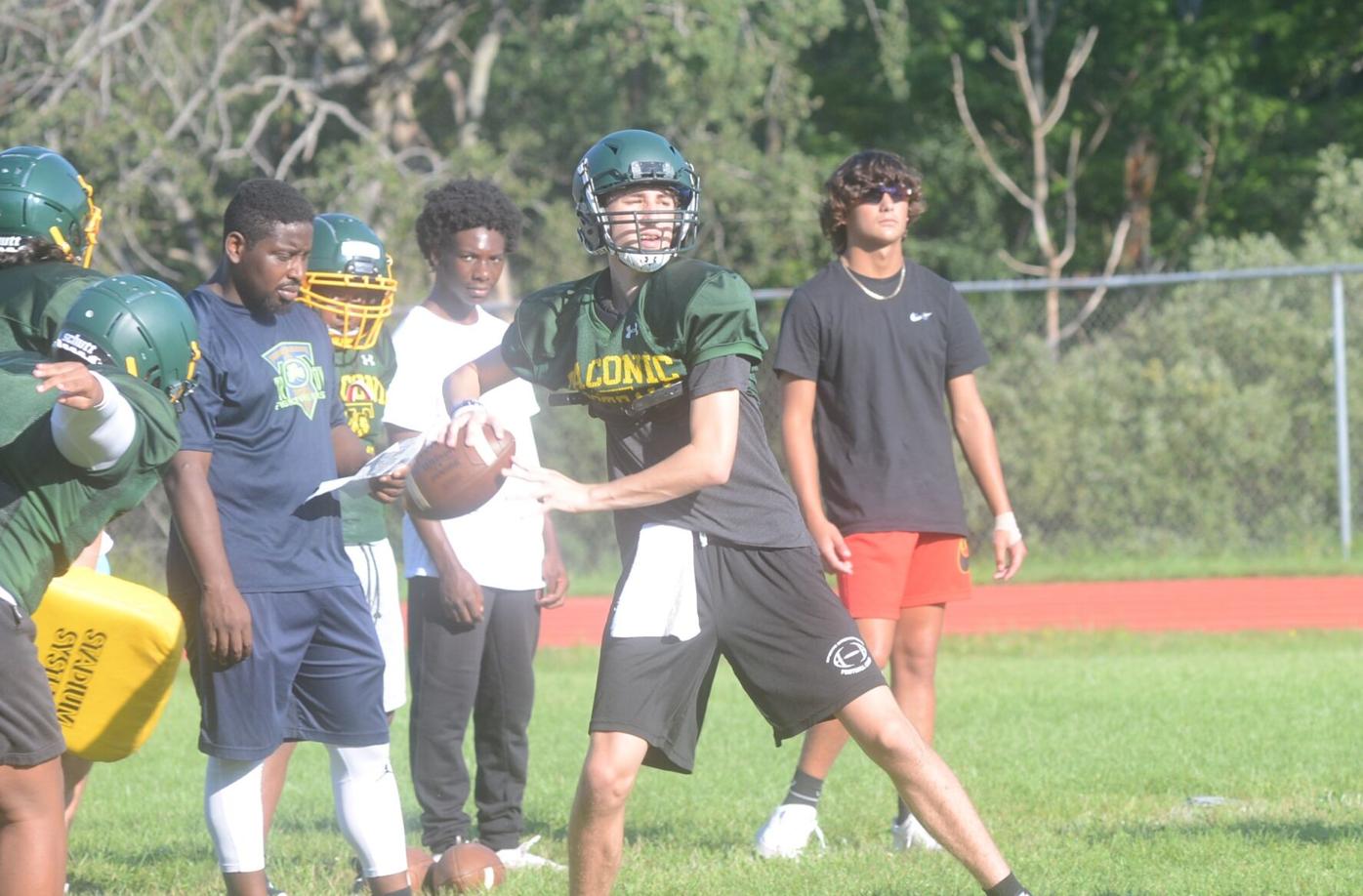 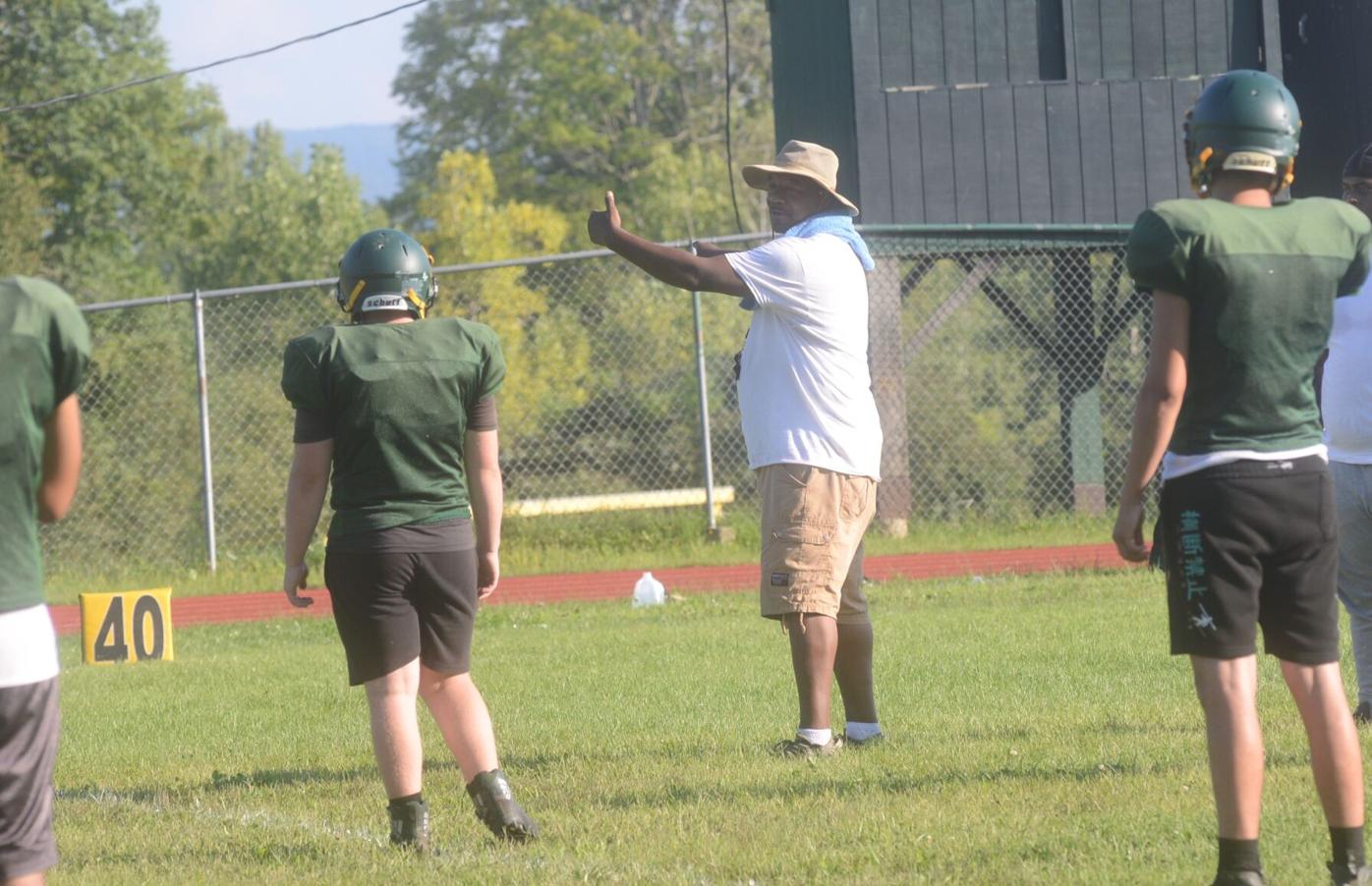 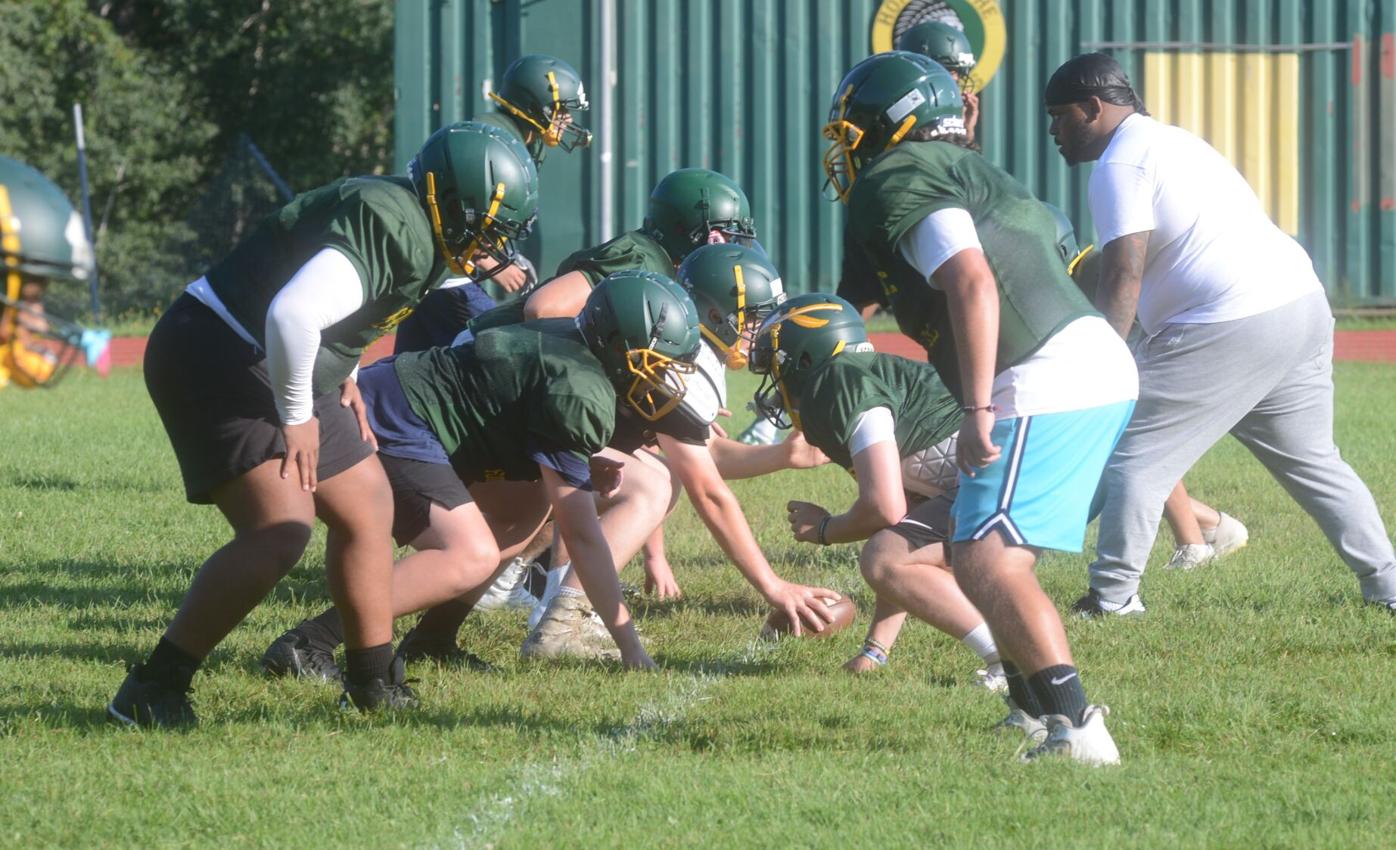 Taconic football works during practice at the high school on Tuesday.

Taconic is marching into the fall with two seniors on the roster and they’ve been at ground zero of the young team’s growth.

“More people want to be out here and the younger guys are catching on quicker,” said Sean Harrigan, a senior who will play receiver and safety for Taconic.

“Our line has been working hard and that is huge for us,” added receiver Dezequiel Merced, the team’s other senior. “I can’t wait to get on the field and see what they do.”

Success on the field starts in the trenches and Jake Hall, Mason Cortis, Hayden Strassell, Caio Lahey and Anthony Fiorini are some of the linemen tasked with protecting junior quarterback Matt McIntosh.

Taconic was a ground-and-pound team in 2020 with seniors Nick Hall and Ian Hadsell in the backfield. However, the latest edition of the team may air the ball out a bit more with McIntosh calling the shots, elite athletes Harrigan and Merced outside and big-bodied Damon Foster penciled in at tight end.

McIntosh stepped in for Hadsell against Lee on April 23 and completed five of eight attempts.

Purcell through the air, Kelley on the ground carry Lee to Senior Night victory over Taconic

“Cornerbacks, reading them and knowing what they’re doing,” McIntosh said of his biggest takeaways from limited action in the spring. “If you have an arm and know what the cornerbacks are doing you can score every time.”

The Taconic veterans have set the standard with sights focused on a postseason berth.

“They’re not fooling around at practice and they’re not letting anyone else fool around either.” Sistrunk said. “They’re keeping everyone engaged and helping the younger receivers who are just getting the routes.

“Having them has been huge. If you get the stars to buy in, everyone else follows. They want to go out on top and they’re bringing that passion behind it and letting the kids see what we need to do to get there.”

Players scattered across the field to pick up equipment shortly after the team ended practice. As equipment was brought to the trailer, it was exchanged for play sheets and route trees.

“Practice has been good and Sistrunk is a great coach,” McIntosh said. “You’re starting to see everything come together.”

Taconic had a week of practices before the tri-scrimmage with Holyoke and Commerce. The team will scrimmage Monument Mountain the following weekend before starting the season on Sept. 9 on the road against East Longmeadow.

“We have some speed and strength,” Merced said, “we’re coming.”