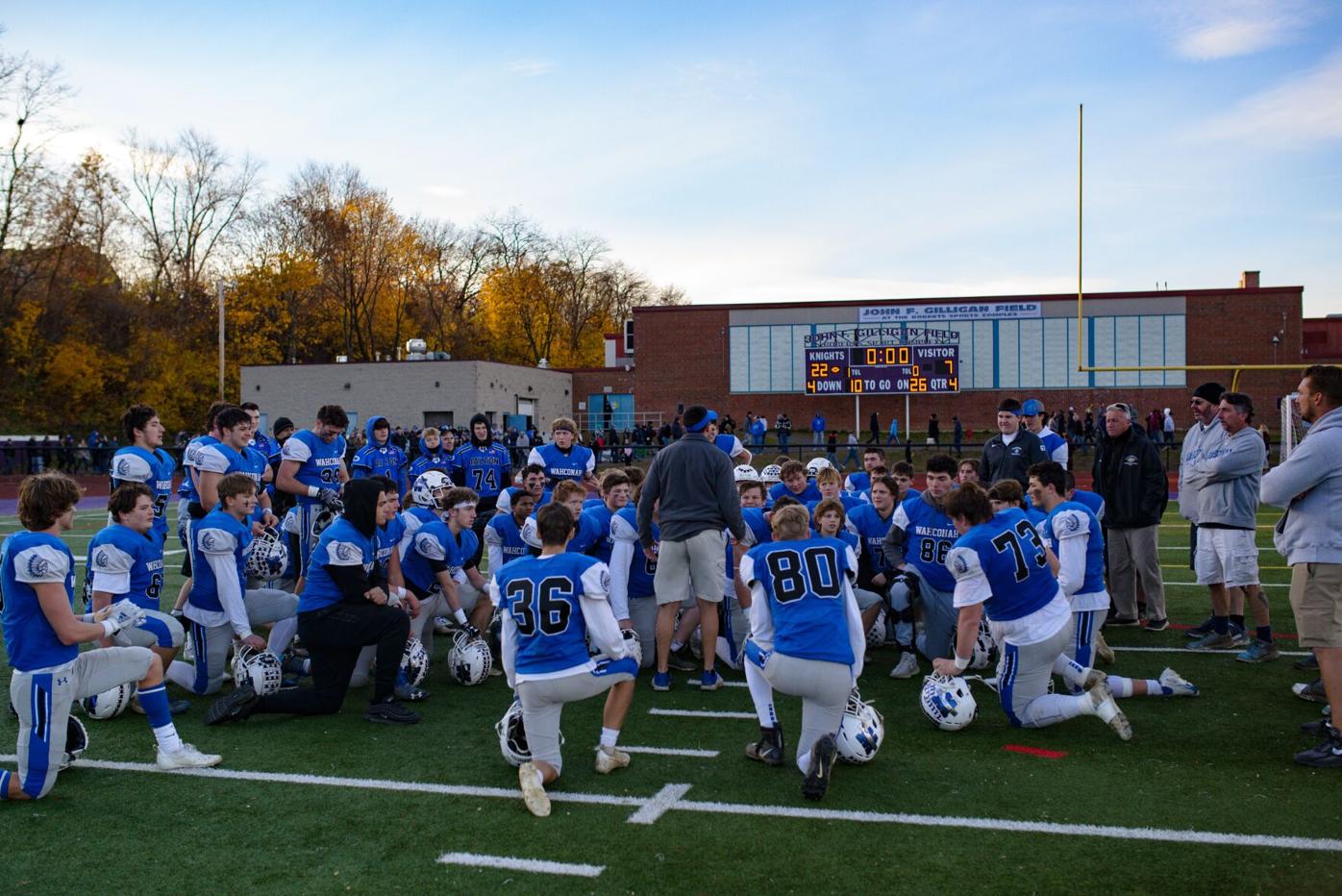 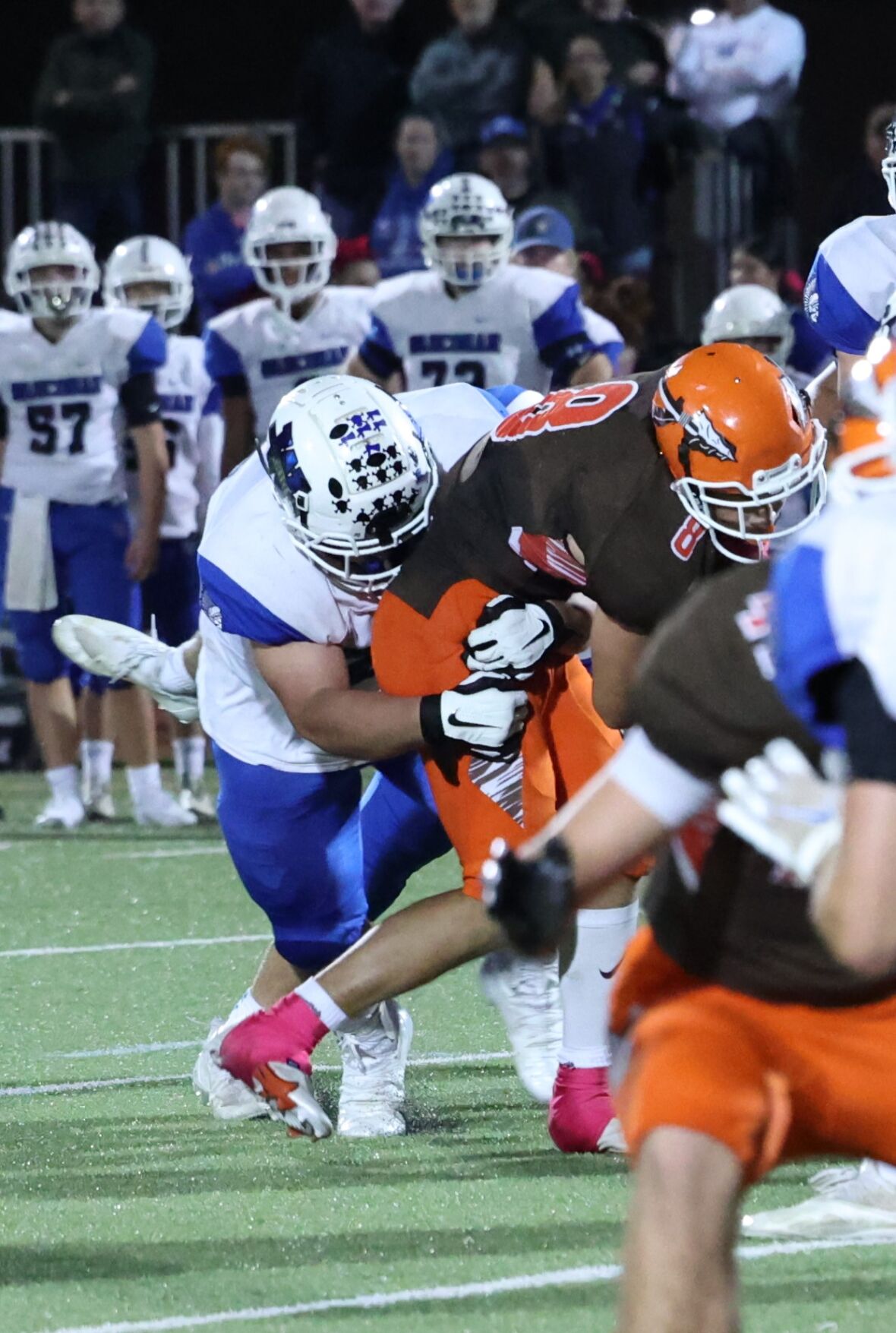 Wyatt George busts into the Agawam backfield to bring down running back Jermaine Norfleet. 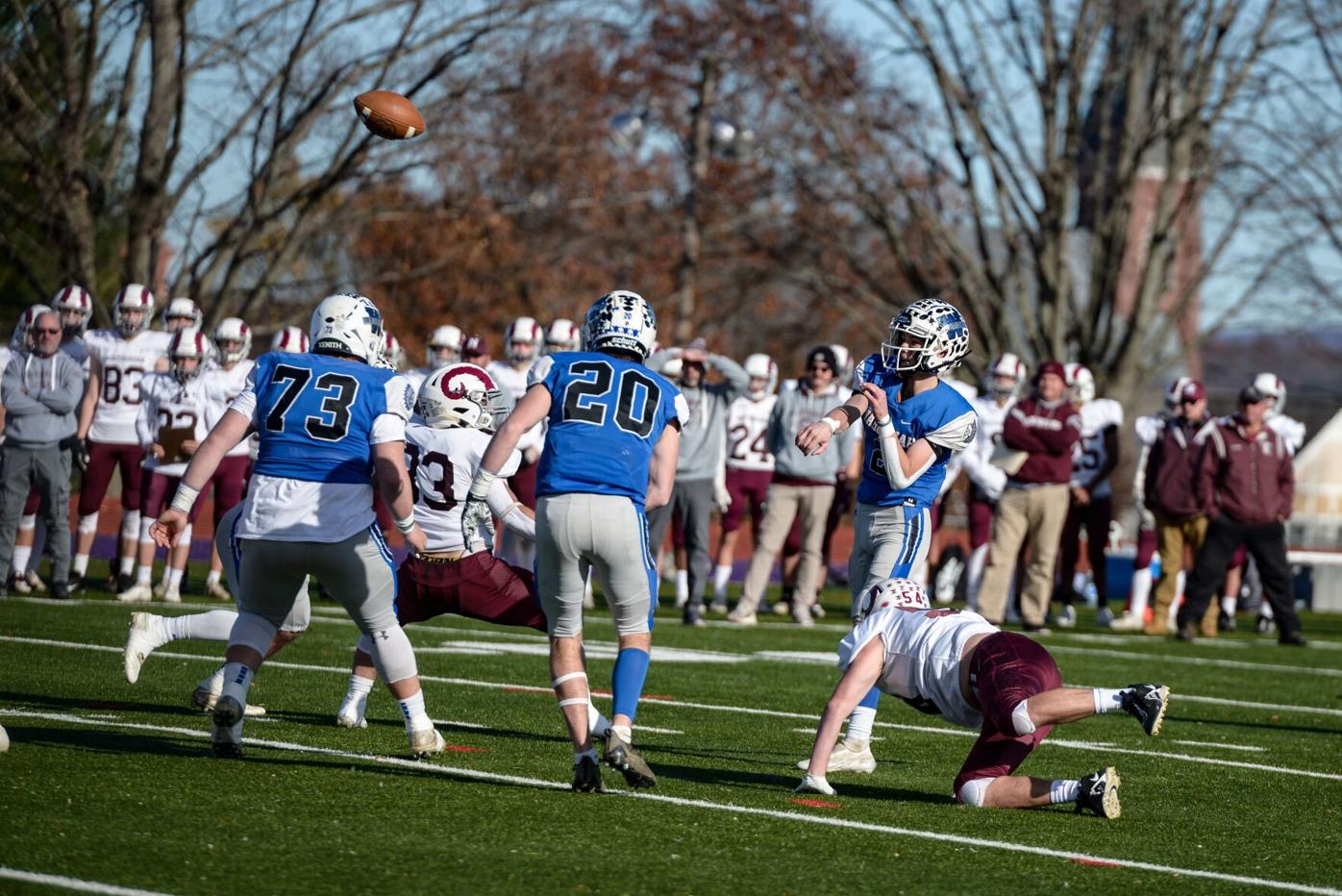 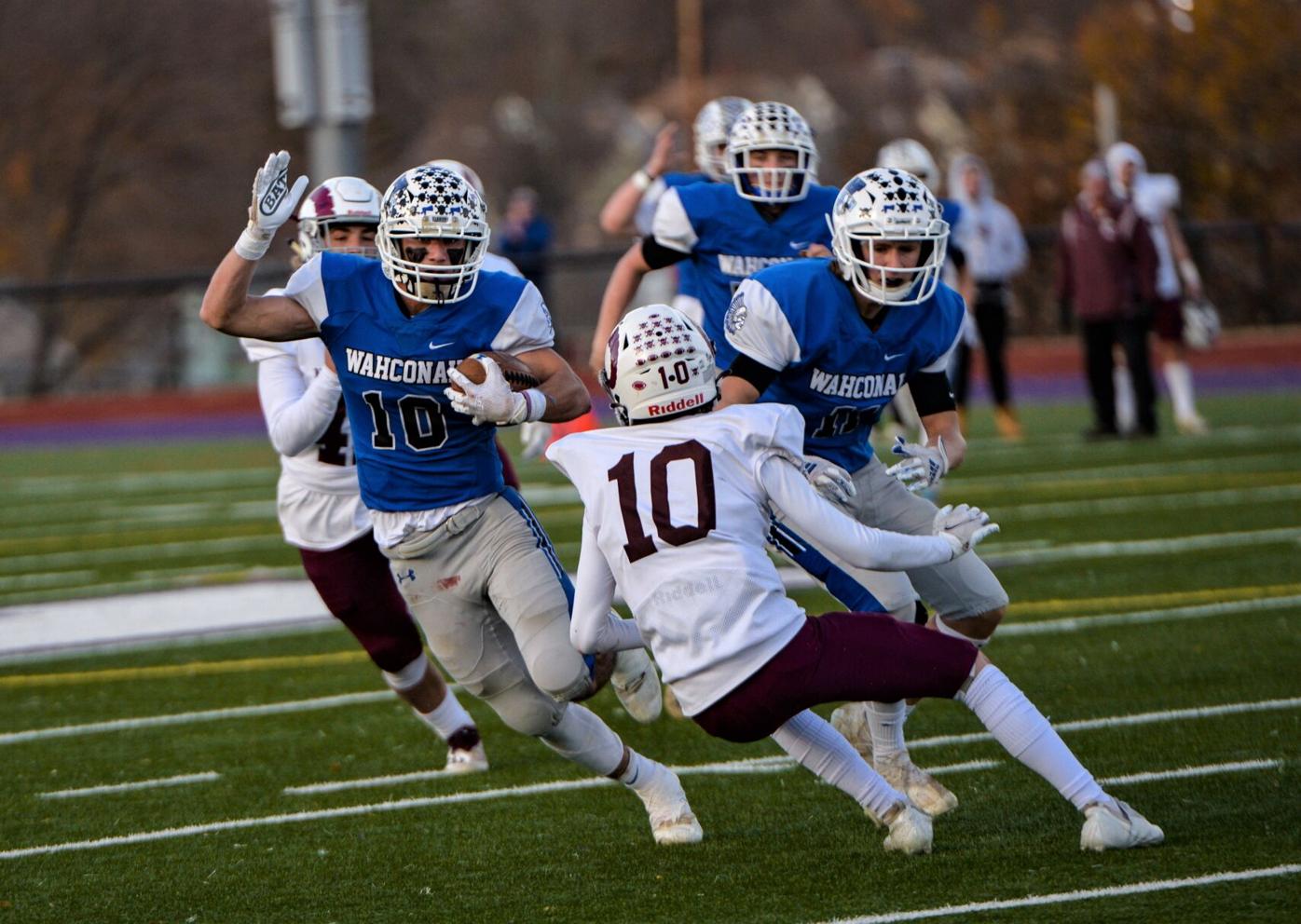 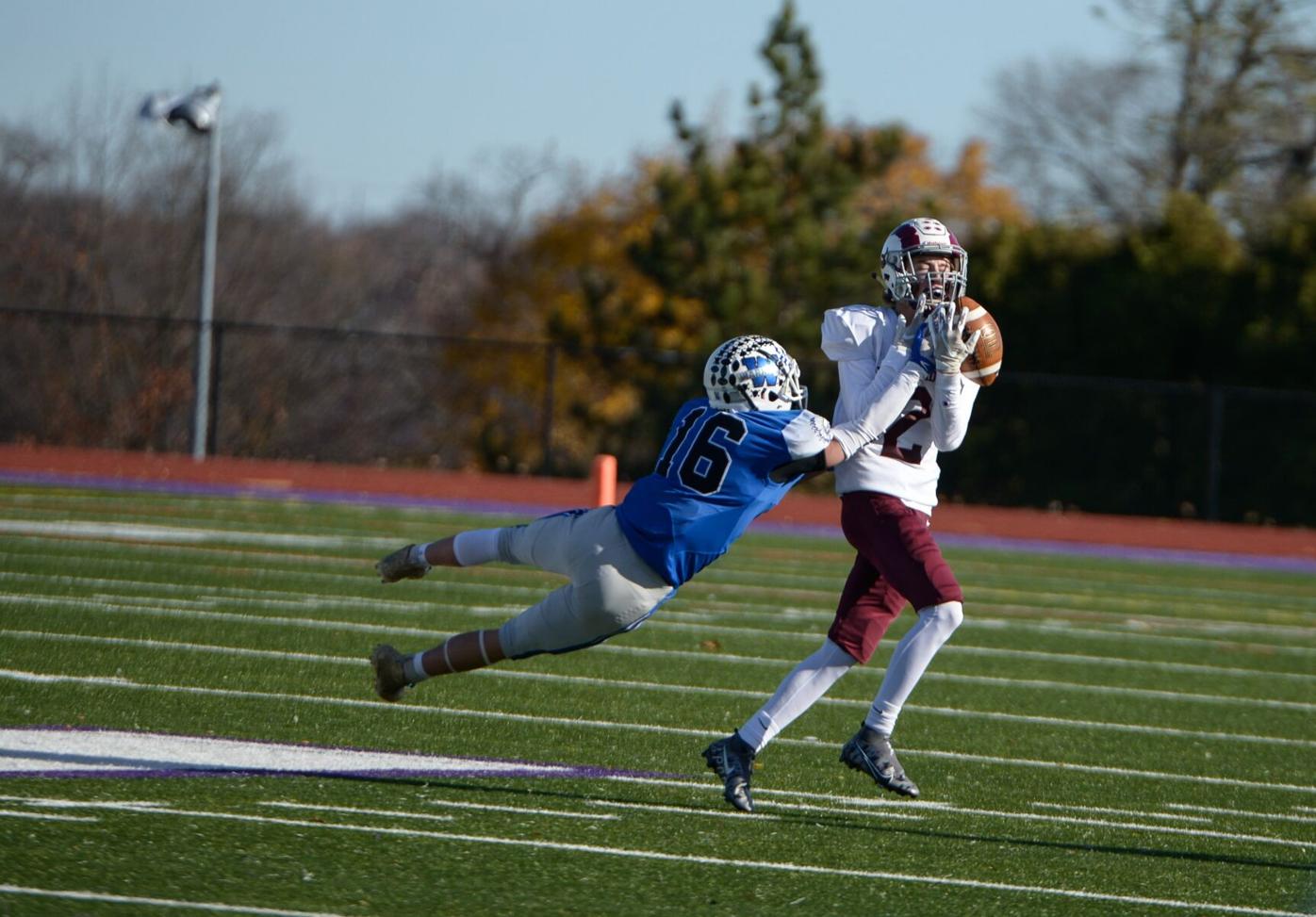 Wyatt George busts into the Agawam backfield to bring down running back Jermaine Norfleet.

DALTON — Preparation for the high school football season almost always begins in the summer. In 2021, however, due to the COVID-19 pandemic, the football season began in March.

The Wahconah Warriors spent a week in early spring trying to thaw out a frozen football sled before competing in the four-game Fall II season.

Eight months later, Wahconah has just one item left on the to-do list before the bite of winter returns.

The Warriors are preparing for the program’s third trip to Gillette Stadium. Top-seeded Wahconah will play No. 6 Cohasset for the Division VII state trophy on Wednesday.

“This week we have to bring everything together,” senior Wyatt George said of preparing for the game. “Perfect everything and come out for practice.”

“Just get better every day and get better as a whole team,” quarterback Ryan Scott added. “Hopefully we can go out next Wednesday and win a state title.”

The Warriors didn’t earn the No. 1 spot in the D-VII tournament by just being the division’s best team — they were the division’s perfect team. Four different programs suffered their season’s first loss to Wahconah during the regular season and coach Gary Campbell Jr.’s squad has outscored opponents 108-21 in postseason play.

“It’s been all of our conditioning,” George said of Wahconah’s success no matter the opponent. “It started when we were eighth-graders moving to freshman, we’ve always done coach Campbell’s crazy workouts and have gotten to it.”

Those same workouts have served as the elevator pitch for prospective student-athletes looking to pursue a state title.

“I started going to summer lifting with coach Campbell [before my freshman year],” said Scott Duma, a senior who spent most of his life playing soccer before arriving at Wahconah. “He just has a way of switching you up. From then on I just fell in love with football and started playing.”

From the pitch to the gridiron, the Warriors aren’t letting Duma’s time playing soccer go to waste.

“When I made the switch, coach knew it right from the jump,” Duma said of his ability to kick the ball. “I started kicking my freshman year when the senior kicker got hurt. I did it on and off during my sophomore year and have done it ever since.”

Wahconah got off on the right foot in the semifinals against No. 4 Northbridge as Duma sent the opening kickoff between the end zone and 5-yard line. The Rams just reached the 30-yard line before the visitors fumbled the ball away.

“It is a burst of confidence knowing that they’re deep in their zone,” Duma said.

That burst kick-started a five-turnover performance from Wahconah. The Warriors recovered two of three balls fumbled by the Rams while linebackers Ben and Brad Noyes bullied Northbridge on short throws. Ben closed the performance with two interceptions and Brad added another.

Last Saturday’s performance in Holyoke was the fifth time Wahconah held an opponent to less than 10 points. The Warriors shut out No. 16 Lunenburg in the first round of the D-VII tournament and allowed more than 20 points just twice on the year.

Wahconah’s back seven held Northbridge to just nine completions on 25 attempts in the semifinals. That contest also featured eight-straight failed pass attempts for the Rams.

“The passing game is something teams are trying to go toward [in the playoffs],” senior Jonah Smith said. “I think our secondary is really good and we stick together, they haven’t been able to do it too well against us.”

Not only are George, Doug Collins, Ashley Chaffee, Owen Alfonso and company pressuring opponents on the defensive line, but the defensive backfield has pestered receivers once the ball is in the air. The Rams went at cornerback Zander Walton on two-straight plays, but the junior made stops on back-to-back attempts to force a punt in the second quarter.

“We’ve been taught to put your hand in the cookie jar and as soon as we see [receivers] with their hands up we just swat at the ball,” Duma said. “Nothing special about it, just a lot of practice.”

The Warriors are chasing a championship but the offensive line has already earned a ring for their work on the field.

“For my 1,000-yard mark I got my offensive line a sandwich ring from BJs,” Smith said after rushing for 1,850 yards on 207 carries through 11 games. “I remember watching Ezekiel Elliot get his line four-wheelers a while back... I can’t afford that but wanted to do something.”

Smith’s best performance of the year featured four touchdowns and 289 rushing yards against Clinton in the D-VII quarterfinals. Smith cracked 200 yards four times and scored 23 touchdowns on the year. Opposing defenses haven’t slowed Smith — or the Warriors — due to their ability to move the ball in different ways. Quarterback Ryan Smith has thrown at least two touchdown passes in six different games and Wahconah scored at least 34 points in nine of 11 contests.

“[It starts] with that first first down,” Scott said of how the offense gets comfortable on game day. “We’re a balanced team where we can run and throw the football. I think we’ve had at least 100 yards rushing and 100 yards passing in every game. We just want to stay balanced.”

That balance begins with Wahconah’s front line commanding the trenches.

“Fire off the ball together, stay low and build that wall — building that wall has been our biggest key for success,” George said of the line’s strong play.

Wyatt, a captain in the trenches, said there was no decision to be made when asked if he would prefer to create a touchdown with a pancake block on a linebacker or score his own touchdown.

“Definitely the pancake,” he said. “That is my forte and we love doing that stuff.”

Wahconah’s steady foundation up front is the base for a roster that has outscored opponents 409-140 and is 48 minutes from a state title.

“Wahconah football has made it out to Gillette a few times,” Scott said, “We hope we can be the first team that wins a state title there.”

Wahconah football is headed to a State Super Bowl. Brad and Ben Noyes led the way, as the Warriors punched their ticket to Gillette Stadium behind a 22-7 victory over Central Mass. power Northbridge on Saturday in the MIAA D-VII State Semifinals.

Jonah Smith rushed for 127 yards, and the Wahconah defense kept visiting Lunenburg out of the end zone in a 38-0 drubbing to open MIAA Division VII state tournament play on Friday in Dalton.