DALTON — Jonah Smith has had some pretty good nights running the football for Wahconah. But the senior running back admitted that he had never crossed the 200-yard mark in his career. 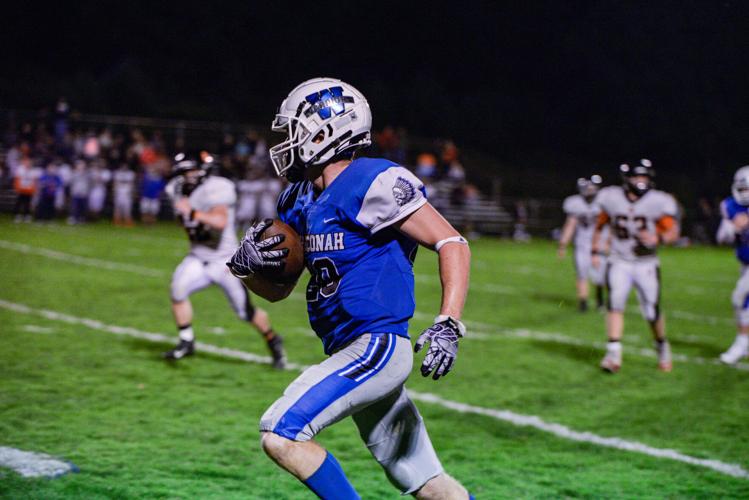 Wahconah receiver Ben Noyes carries the ball up the sideline against Lee. 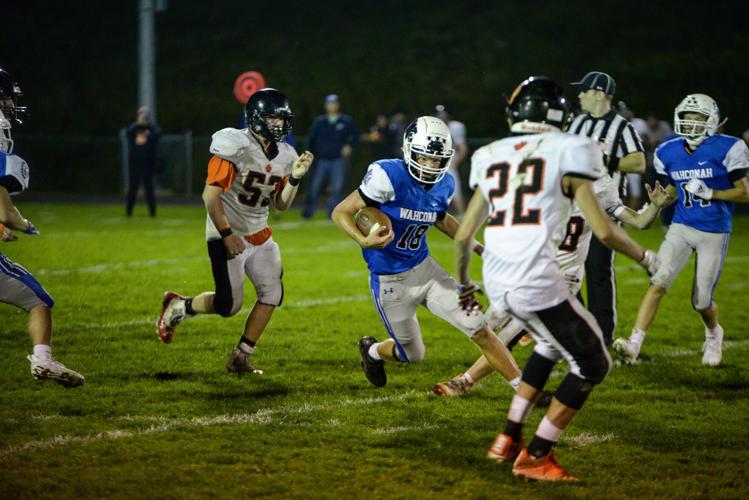 Wahconah's Doug Collins weaves through the Lee defense. Collins had a 68-yard touchdown run in the second half on Friday night. 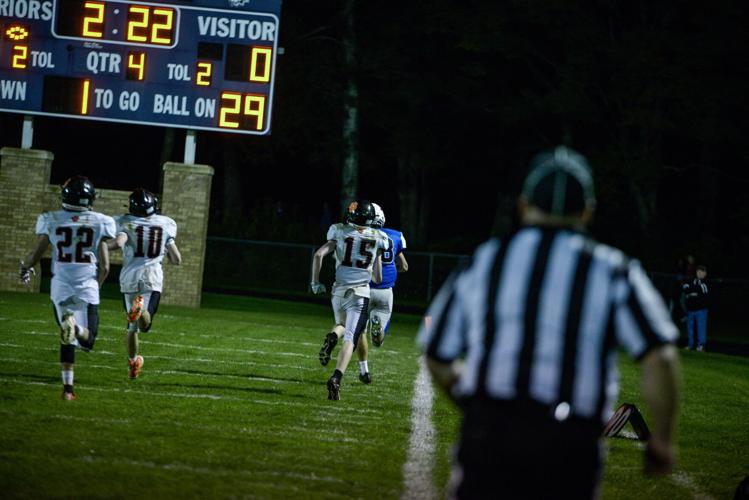 Wahconah's Doug Collins breaks free down the sideline for a touchdown. 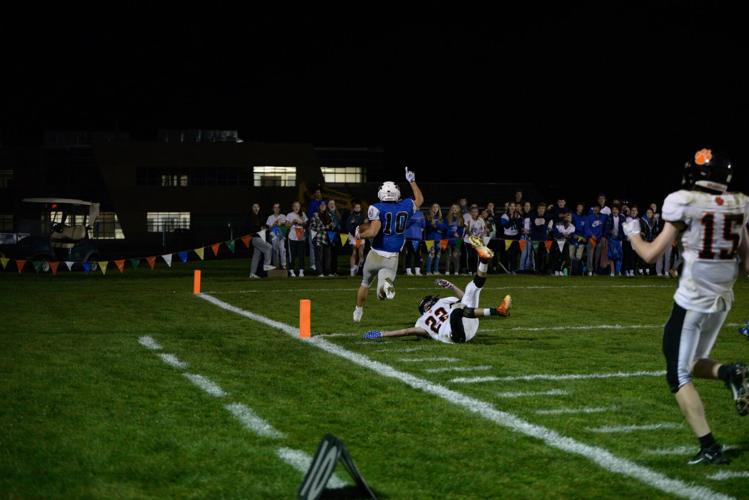 Wahconah's Jonah Smith raises a finger to the student section as he scores a touchdown during a home game against Lee on Friday night in Dalton. 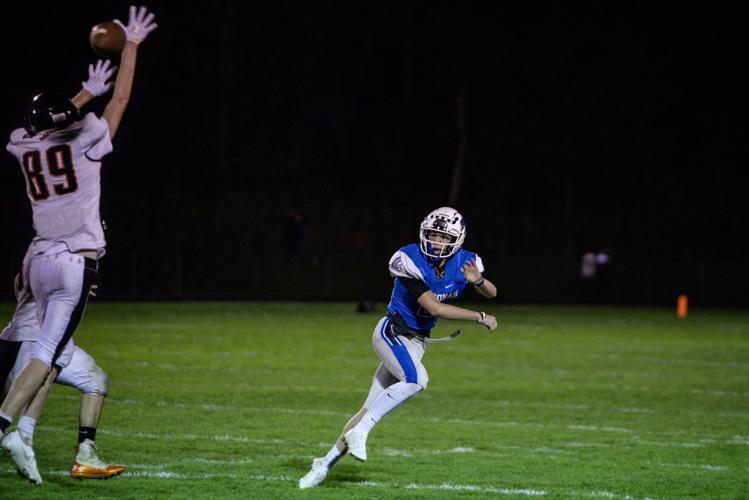 Lee's Mason Mihlek gets his hands up to block a pass by Wahconah quarterback Ryan Scott. 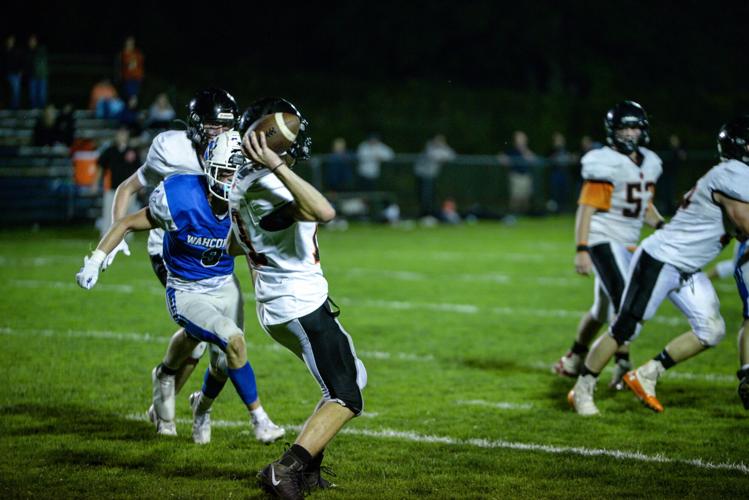 To view a complete gallery or purchase photos from this game, click here.

Wahconah receiver Ben Noyes carries the ball up the sideline against Lee.

Wahconah's Doug Collins weaves through the Lee defense. Collins had a 68-yard touchdown run in the second half on Friday night.

Wahconah's Doug Collins breaks free down the sideline for a touchdown.

Wahconah's Jonah Smith raises a finger to the student section as he scores a touchdown during a home game against Lee on Friday night in Dalton.

Lee's Mason Mihlek gets his hands up to block a pass by Wahconah quarterback Ryan Scott.

The Wahconah veteran carried the ball 18 times for a career-best 263 yards and three touchdowns, including one of 70 yards, as the Warriors scored 28 points in the second half to pull away from Lee 34-0.

It was the first time since 2013 that the Wildcats (1-1) had played in Dalton. The Warriors (2-0) beat Lee 50-12 in the Fall II game played on neutral turf at Berkshire Community College. Smith had 133 yards on six carries in that game. Like Friday, he scored three touchdowns back in April.

And as he did then, Smith had a lot of praise for the offensive line that opened gaping holes on many of those carries.

“I have to thank them for it.”

Smith ran for 95 of his 263 yards in a first half that saw Wahconah get only one touchdown, on Smith’s 20-yard run to cap Wahconah’s first possession of the game. The Warriors broke the game open with two third quarter touchdowns.

“We know they’re good. We know they’re going to make some plays. They have a lot of experience over there. Jonah’s a really hard runner and he had a hell of a game tonight,” Lee coach Keith Thomson said. “That was kind of our mantra coming in this week, make them earn it. Make them drive it down the field to score. We gave up those big plays that were a result as much from fatigue as anything else.

“Eventually, they wore us down and they hit those big ones.”

The Warriors got Smith’s opening touchdown and that was it in the first half. Wahconah punted once and twice had drives stall inside the Lee red zone. While Smith had run for 95 yards in the half, Wahconah managed only 70 net yards rushing in the opening 24 minutes and had 101 yards of total offense in the first half. Things weren’t much better for the undermanned Wildcats, who had a number of regulars out and in street clothes, as they had 36 yards in the first half.

Smith said after the game that Wahconah played some lethargic football in the first half. It was a verdict his coach agreed with.

“I don’t know what it was. We didn’t have a great week of practice, I’ll be honest with you, we just didn’t,” Wahconah coach Gary Campbell Jr. said. “It filtered into our game. But also, credit to Lee with some of the things they did that maybe made our guys think a little more than they should have. When you think in high school football, you play slow and when you play slow, you play sloppy. You add into that penalties and [bad] snaps, and we just didn’t do a great job.

“We looked out of synch in the first half.”

Wahconah had won the pregame coin toss and elected to defer. So the Warriors took the third-quarter kickoff almost to midfield. They started their drive at the Wahconah 46-yard line and right out of the gate, got a 29-yard burst by Smith. It was his longest run of the night, to date. The next two running plays, one on a bad snap to quarterback Ryan Scott, moved the Warriors back 18 yards.

But Scott found Drew Wendling for 10 yards, setting up a fourth and 18. Wide receiver Luke DiCicco got out in the left flat and Scott led him well. DiCicco caught the ball in stride and ran down the left sideline for a 33-yard, catch-and-run for a touchdown. Wahconah’s two-point conversion run failed, but the Warriors were now up 12-0.

The Wahconah defense held the Wildcats to 3-and-out. Mason Mihlek’s punt went 31 yards to the Wahconah 30. On the first play, Smith burst through the center of the offensive line, cut to his left and found open real estate down the left sideline. Smith went 70 yards for a touchdown that broke the Wildcats’ collective spirit. Those two third-quarter scores turned a one-touchdown lead into a 20-0 advantage for the Warrior.

“We’re banged up. We don’t have a lot of depth. But I’m real proud of our kids’ effort tonight,” Thomson said. “They played real physical. They didn’t back down. Wahconah’s a great football team. They kind of set the bar in the county. We knew that coming in. What we were looking for tonight was to see some fight from our kids. We’re excited to move forward. Give them credit. Gary made some adjustments in the second half. They caught us a couple of times, on fourth down, that took a lot of wind out of our sails.”

Wahconah added a pair of fourth-quarter touchdowns to put the game away.

While Lee ran 43 plays to 47 for Wahconah, the Warriors outgained the Wildcats 394 yards to 113. While it took the Wahconah offense a little bit of time to get going, the defense was there from pretty much the start.

“Our defense really stepped up,” said Smith, who plays defensive back. “That’s really the reason we won that game. We kept them to zero points and that’s all you can ask for.”

Lee will host McCann Tech Friday night and look to get back on the winning track. Wahconah will play Taconic at BCC next week. If Wahconah wins, the Warriors will get through the Berkshire County part of its schedule with a 3-0 record.

“Certainly, it is of utmost importance.”