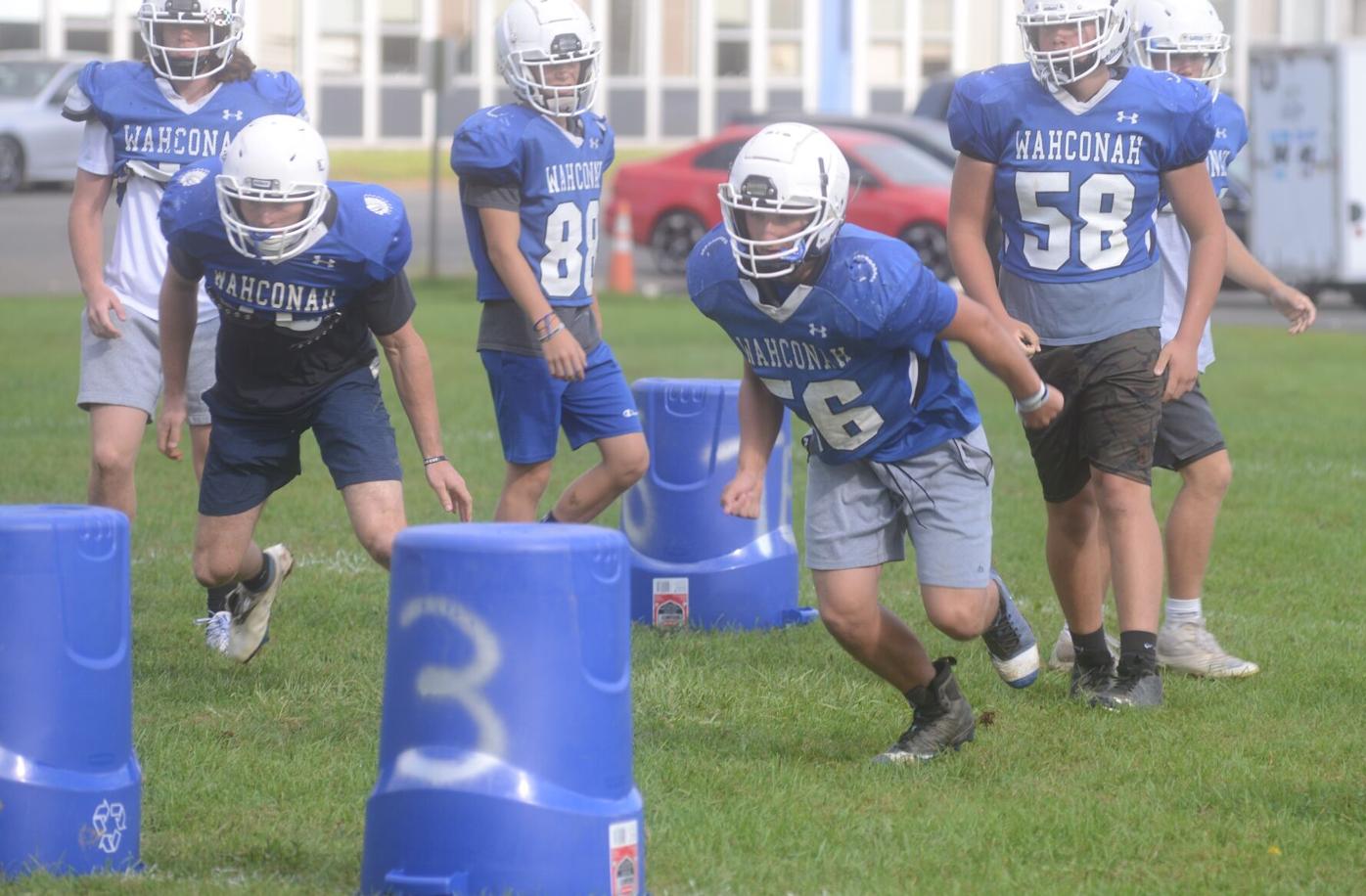 Wahconah linebackers focus on gap assignments during Monday's practice at the high school in Dalton. The Warriors begin the season on Friday at home against Pittsfield. 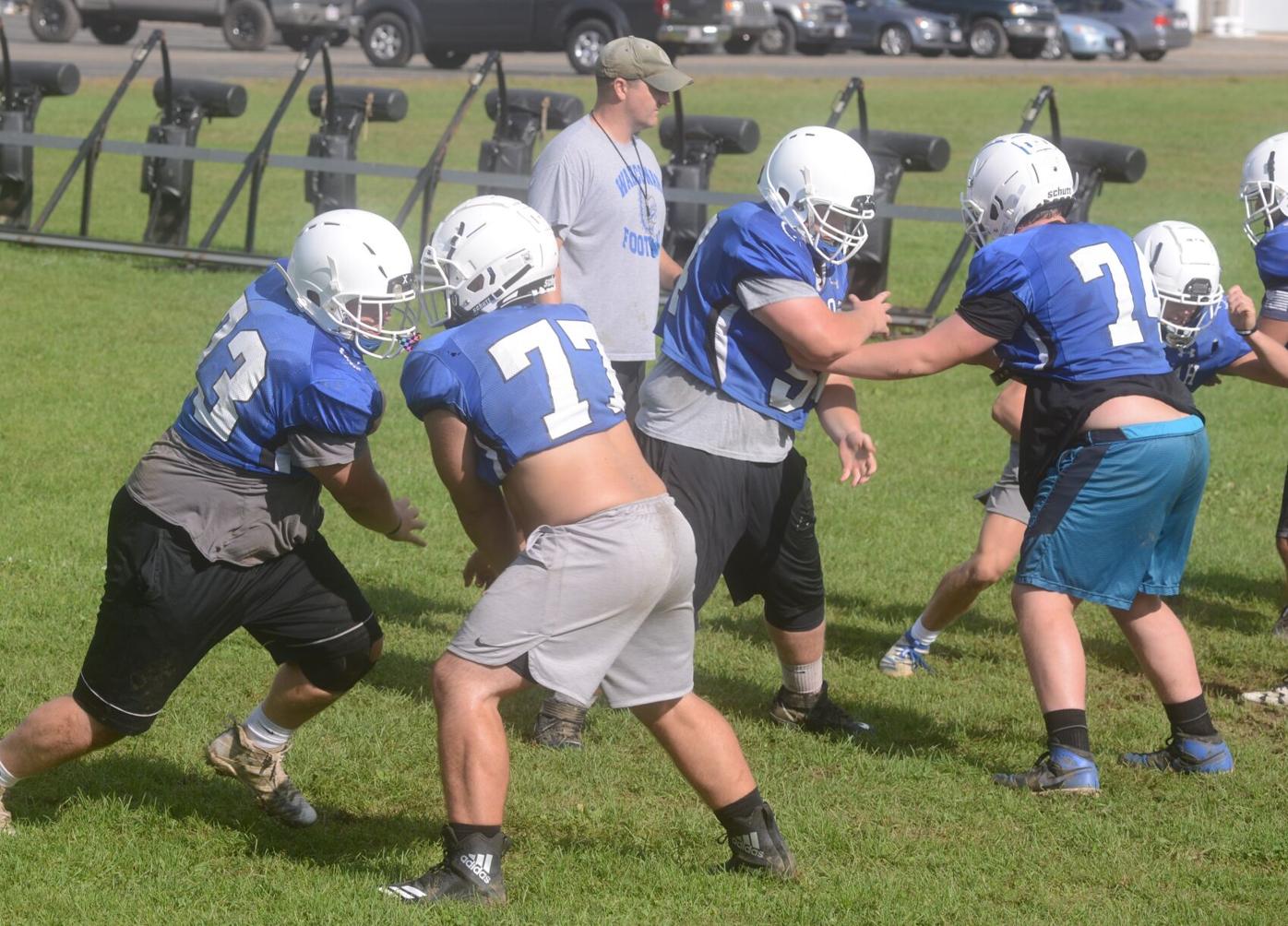 Wahconah linemen work on hand placement during Monday's practice at the high school in Dalton. 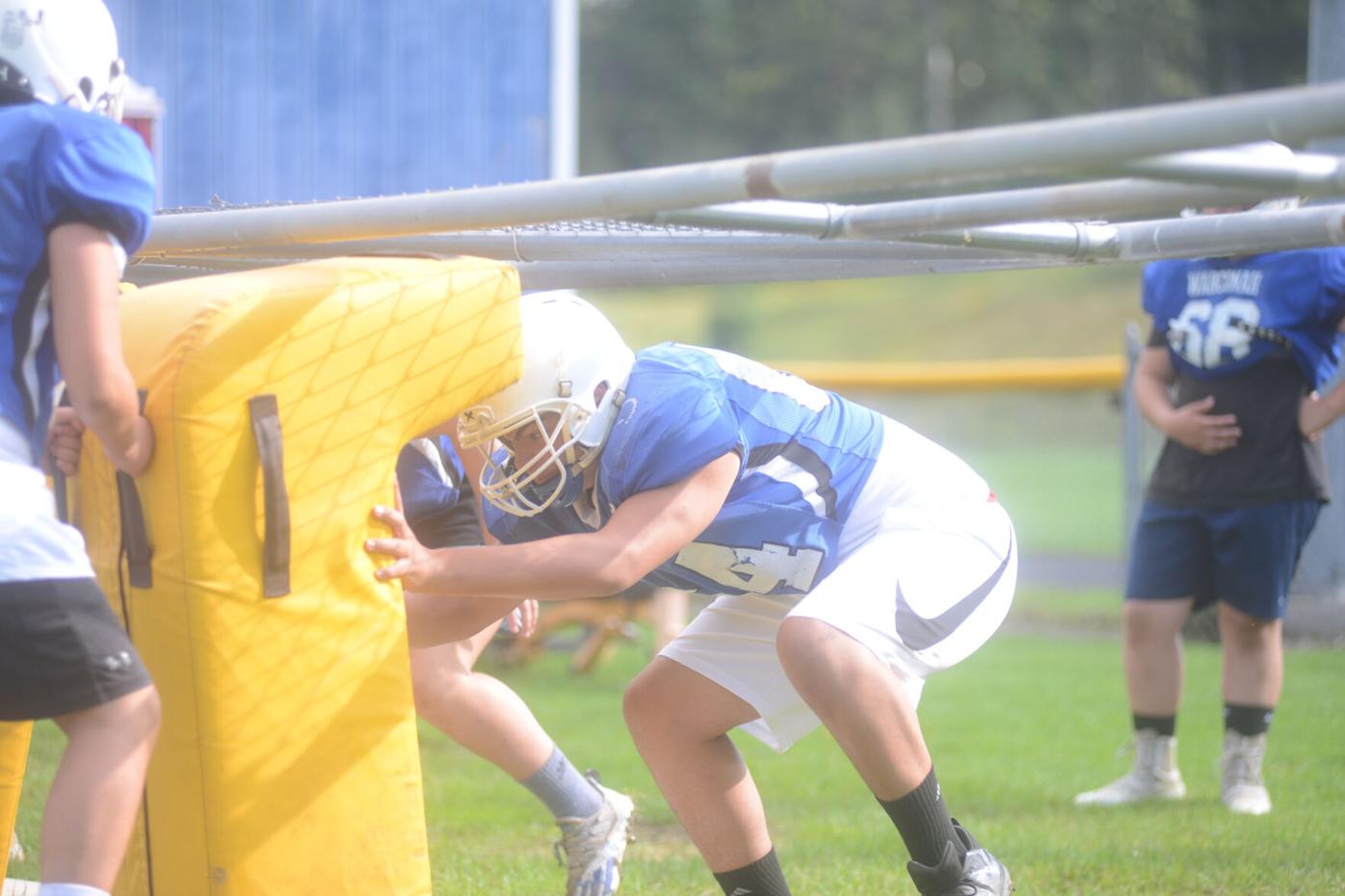 Wahconah linemen work during drills at the high school in Dalton on Monday. The Warriors begin the 2021 fall season at home on Friday against Pittsfield.

DALTON — Monday was Labor Day and only silence echoed through the halls of Wahconah Regional High School. The campus surrounding the school, though, was a different story — it’s game week.

The school’s soccer, cross-country and football teams were all out bright and early as the clock ticked closer to the start of the fall sports season.

“It is a beautiful day, I get to come coach football and work with kids,” coach Gary Campbell Jr. said as he reflects on the start of his 20th season as the coach of Wahconah football. “It’s a great ride and I’m lucky to do this.”

The Warriors had a strong Fall II season that gave a core of seniors, including captains Jon Render, Quinn Gallagher and Zach Archambault, one last ride as Wahconah finished 3-1.

“I was glad that we had spring football,” said Jonah Smith, who will play running back and defensive back for the Warriors. “The seniors taught me a lot and I’m glad I can come out here and share that knowledge.”

Smith, who ran for 133 yards and scored three touchdowns against Lee, joins Ryan Scott, Ben Noyes and Wyatt George as the team’s four senior captains for 2021.

“I think they’ve taken the bull by the horns in terms of leading by example,” Campbell said of his captains. “They are leading with their actions and are doing a great job with it.

“Before they can get on a teammate or say something to motivative the team, they’ve had to lead with that work ethic.”

Noyes will be in the middle of the defense at linebacker and also see snaps at tight end. Meanwhile, George will play in the trenches on both sides of the ball.

Scott didn’t play much after suffering an injury early in the spring but will take over for Gallagher as the team’s quarterback. Despite not playing in a game last season, Scott was called into action as a sophomore after Gallagher suffered an injury.

Wahconah football gets fundamentals down on Day 1 of training camp

He stepped in for three games in 2019 — throwing touchdown passes in each.

“My sophomore year was the leadup to my senior year,” Scott said. “It was a good experience to get ready mentally. Physically, I am bigger than I was as a sophomore, I’ll be ready.”

Spring football is rare in the northeast, but Campbell believes it will have a positive impact on the team this season. Wahconah begins the year on Friday, five months after the Fall II season.

“I think it had a big effect,” Campbell said. “I think we were able to install a lot of our stuff faster this year because I think the kids retained quite a bit from the spring.”

The Warriors play in the Suburban South but the team’s early-season schedule will roughly resemble Wahconah’s path in the spring.

Games against Lee and Taconic are on the horizon, but the Warriors are currently focused on an opening night battle with Pittsfield.

“They’re always a tough team and it will be a great challenge,” Scott said.

Kickoff between the Generals and Warriors is slated for 7 p.m. in Dalton on Friday night.

“They beat us in the spring,” Smith added. “We have to come out with a chip on our shoulder. That game will go a long way in showing us who we are as a team.”