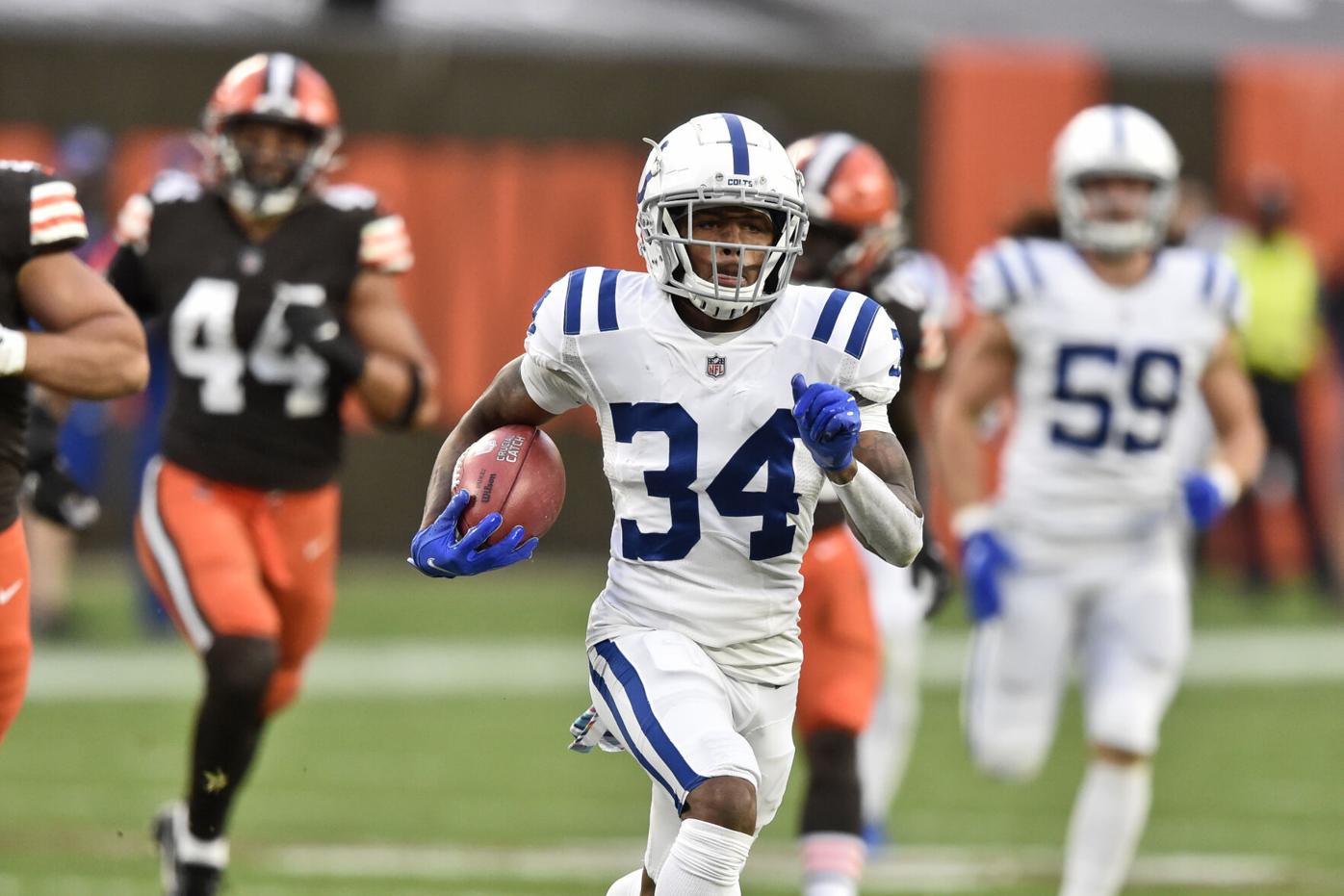 Indianapolis Colts cornerback Isaiah Rodgers, a rookie out of UMass, ran a kickoff back 101 yards for a touchdown last week against the Cleveland Browns. 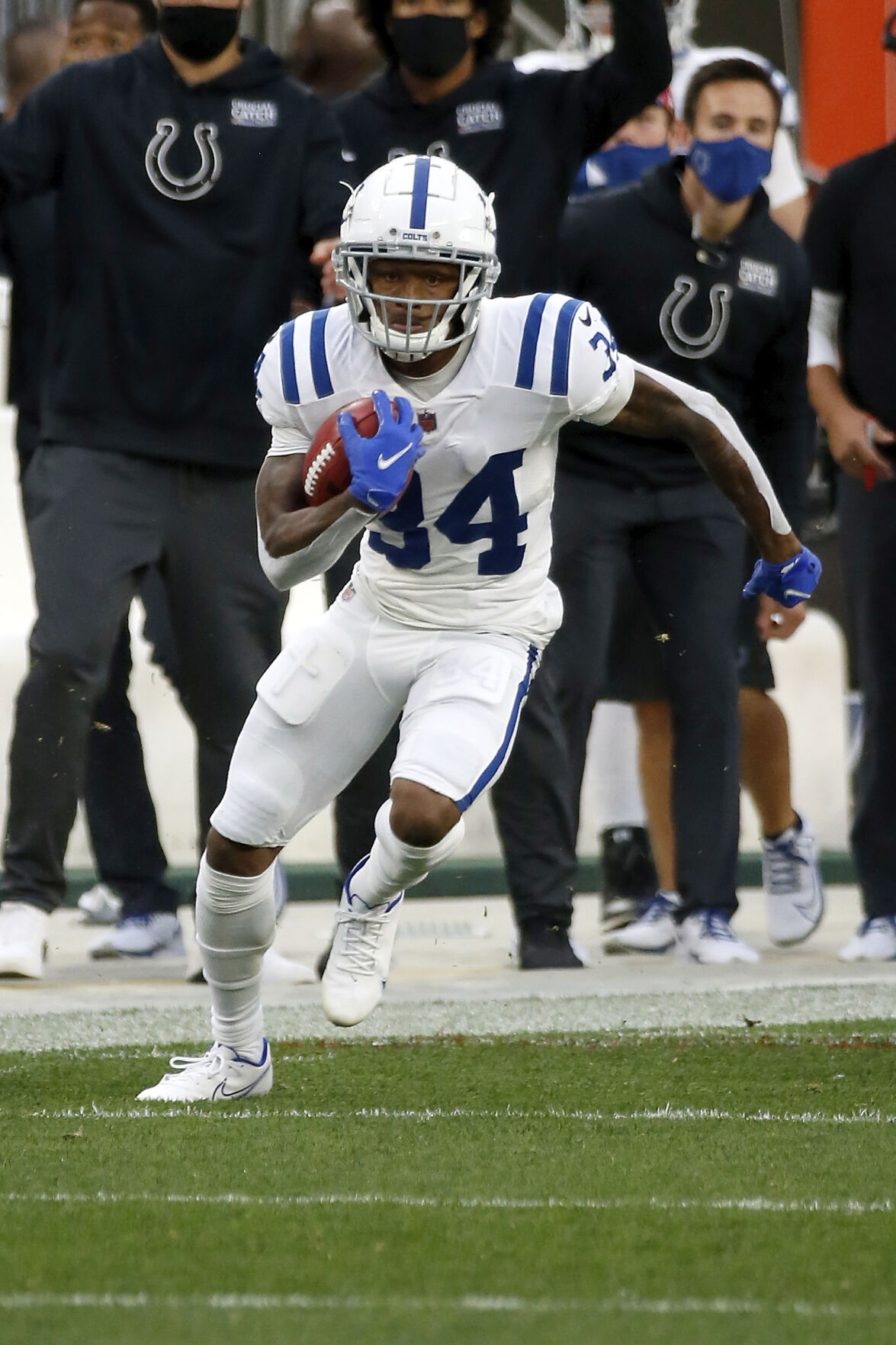 KIRK IRWIN — THE ASSOCIATED PRESS Indianapolis Colts cornerback Isaiah Rodgers, a rookie out of UMass, ran a kickoff back 101 yards for a touchdown last week.

Indianapolis Colts cornerback Isaiah Rodgers, a rookie out of UMass, ran a kickoff back 101 yards for a touchdown last week against the Cleveland Browns.

KIRK IRWIN — THE ASSOCIATED PRESS Indianapolis Colts cornerback Isaiah Rodgers, a rookie out of UMass, ran a kickoff back 101 yards for a touchdown last week.

Kickoff returns, at least in the National Football League, are on the verge of becoming extinct, what with kickers regularly booming the ball into — or out of the end zone.

That’s why, what Isaiah Rodgers did last Sunday was so unusual.

Rodgers, a rookie cornerback and kick returner with the NFL’s Indianapolis Colts, returned a third-quarter kickoff 101 yards for a touchdown against the Cleveland Browns. It did not help the Colts get over the hump in a 32-23 loss to the Browns in Cleveland, but it was a memorable moment for the former University of Massachusetts standout.

“With the kick return, I never really saw the opening,” Rodgers said. “I just knew who was blocking who, and I knew my teammates would be there to help me. As I was running through, I was really going to run straight because I know these guys trust me and I trust them enough to open a hole for me.

“Once I got through, I thought I got this far, I might as well just find a way to get to the end zone.”

The kickoff play came immediately after Cleveland Safety Ronnie Harrison Jr. intercepted a Philip Rivers pass in the third quarter and returned it 47 yards for a touchdown. The point-after kick put the Browns up 27-10.

On the ensuing kickoff, Browns kicker Cody Parkey put the ball one yard deep in the end zone. Instead of taking a knee or letting the ball go through the end zone, the former Minuteman caught the ball and planned to come out with it.

“I think it all starts with the coaches,” Rodgers said, in a phone interview with The Eagle Thursday night. “They put the trust in me to allow me to even take the ball out one or two yards deep. I never had that leeway. It always was foot on the goal line, don’t back up.

“The coaching staff here put a lot of trust in me to be able to bring the ball out, even as a rookie.”

Rodgers was parallel with the yard numbers on the side of the field closest to the television cameras. He got a hole at the 25-yard line, eluded tackles by Cleveland special teammers Kevin Johnson and Stephen Carlson, and broke a tackle attempt by M.J. Stewart Jr. With a little bit of room, Rodgers ran away from Johnson and got into the end zone for the touchdown. The point-after made it 27-17, but the Colts couldn’t catch up.

About the lack of kick returns, Rodgers said it isn’t frustrating that so many kickers can kick the ball out of the end zone. He said returners have to pick their spots.

“On a good day, every kicker in the NFL can kick it out of the back” of the end zone, Rodgers said. “The best thing about this game is the weather can also play a factor. When you know they’re going to switch the fields after a quarter, you know deep down the wind is going to catch the ball. You have to factor in the weather now. That’s something I never had to do in my career. Really, just know your kickers and know where they want to kick the ball.”

Rodgers was a sixth-round pick by the Colts in the 2020 NFL Draft, the 211th player chosen.

On the current Indianapolis depth chart, he is listed as the second-team nickel cornerback, behind starter Kenny Moore II, who is a four-year player from Valdosta (Ga.) State.

The former Minuteman is now listed as the Colts’ primary kickoff returner and backup punt returner.

In five games, Rodgers has played 73 snaps. He has been on the field for 31 snaps at the wide cornerback position, five snaps as a slot corner, 14 snaps on the field goal-extra point block team, 13 kickoff returns, nine punt returns and one snap in punt coverage. He has recorded three tackles on defense.

When the Colts drafted Rodgers, the team talked about the cornerback’s speed and his ability to return kicks and punts. He demonstrated that last week, when he took that kickoff 101 yards for a touchdown.

Rodgers became only the sixth rookie in Colts (Baltimore and Indianapolis) history to return a kickoff for a touchdown, and the first since Dominic Rhodes did it back in 2001.

Last Sunday, Rodgers returned five kicks for 212 yards and a 42.4 yards-per-return average. The 212 yards in one game were the third most in Colts’ history. It was a lighter workload this past weekend in the Colts’ 31-27 win over Cincinnati at home. Rodgers returned just one kick for 25 yards, and there were five touchbacks.

So, what has it been like for the Tampa, Fla., native in the NFL?

“It’s been everything you dream of as a kid,” he said. “You come in and you learn from older guys and guys you looked up to from when you were in middle school and high school. I have [starting cornerback] Xavier Rhodes here, a guy I’ve been watching for a long time, comes from Florida State.

“It’s everything you can think of as a kid growing up, and it’s a dream come true.”

The game is the same, but the former Minuteman said the biggest difference is in decision-making — both on and off the football field.

“Your decisions have to be a lot different,” he said. “You have a much bigger brand out. You can’t do certain things out in the public or in social media. Your decisions on the field, there are smaller tight holes that quarterbacks can squeeze the ball through, so you have to come out of your breaks faster.

“The speed of the game is a lot faster.”

The first time Isaiah Rodgers ran on an NFL field as a pro was in Jacksonville back in September. It’s a memory he’ll long treasure.

“The first game, being in Jacksonville and coming from Florida, I think it was huge. I had family there,” he said. “I went out early with the returners. You’re the first people out there. It’s weird because we were the only game that week with fans. It wasn’t full capacity, but coming from nothing like that to being a rookie, it felt like the stadium was at full capacity, just seeing 10 people and hearing them screaming and calling your name.

“It was nerve-wracking, but a dream come true.”