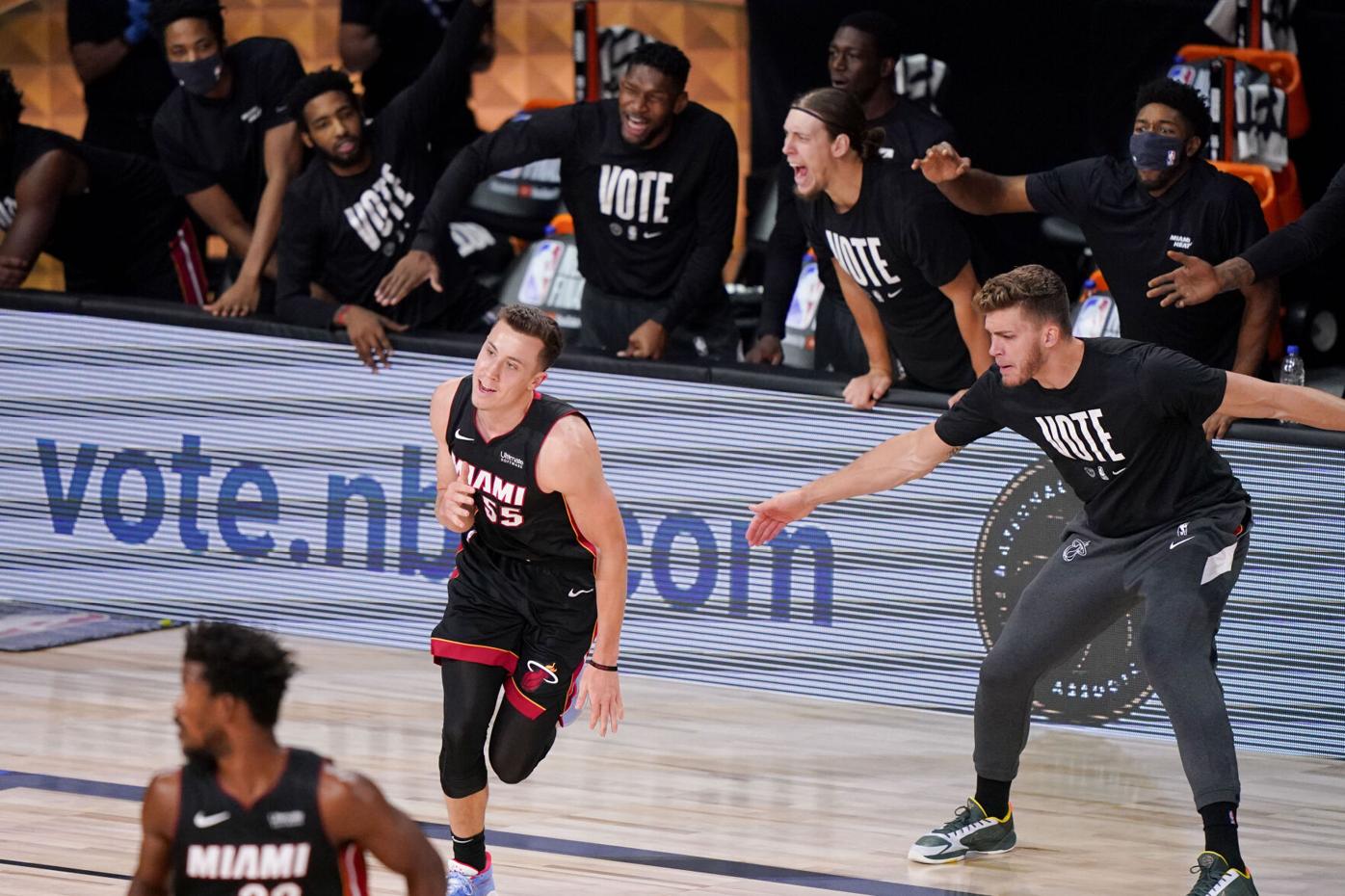 Miami Heat guard Duncan Robinson, who started his college career in Williamstown playing for the Ephs, celebrates after scoring during Game 4 of the NBA Finals against the Los Angeles Lakers, last week. 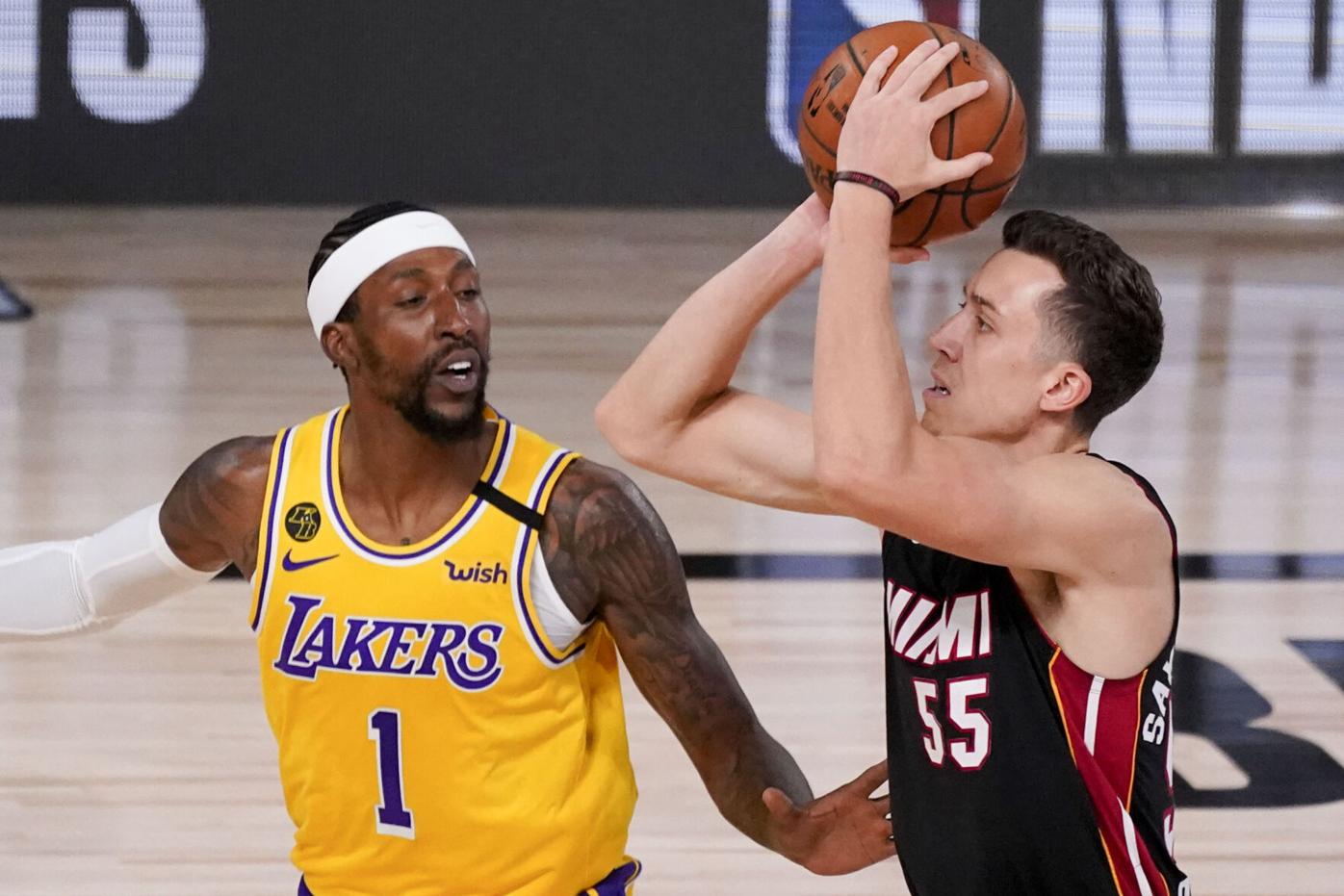 JOHN RAOUX — THE ASSOCIATED PRESS Facing elimination in Game 5 of the NBA Finals on Friday, Miami Heat guard Duncan Robinson hit on 7 of 13 3-point shots, scoring 26 points in a 111-108 victory over the Los Angeles Lakers.

Miami Heat guard Duncan Robinson, who started his college career in Williamstown playing for the Ephs, celebrates after scoring during Game 4 of the NBA Finals against the Los Angeles Lakers, last week.

JOHN RAOUX — THE ASSOCIATED PRESS Facing elimination in Game 5 of the NBA Finals on Friday, Miami Heat guard Duncan Robinson hit on 7 of 13 3-point shots, scoring 26 points in a 111-108 victory over the Los Angeles Lakers.

In the aftermath of Robinson’s 26-point, six-rebound performance in the 111-108 win, NBC Sports writer Tim Layden, who happens to be a Williams College graduate, Tweeted out the following:

“Duncan Robinson had 26 points and 7 threes and somewhere guys from Colby and Middlebury are drinking hazy IPAs and saying, ‘I shut that guy down all night.’”

Looking back on Robinson’s only Williams season, what was pretty clear is that very few players actually shut him down.

“I’ve said it many times that he’s the most talented player that we’ve ever recruited,” then-Williams coach Mike Maker said in a statement announcing Robinson being named the NESCAC Rookie of the Year back in 2014. “He’s very deserving of his postseason honors.”

“Duncan’s performance and production on the court speaks volumes about his talent and the level of trust and confidence that his teammates and coaches have in him,” said Maker. “I believe that he is one of the premier players in the United States regardless of classification. It’s rare to have a star player who is so low maintenance and puts the team in front of himself.”

Robinson was also the D3Hoops.com National Rookie of the Year for the 2013-14 season.

That 2013-14 Williams team advanced to the NCAA Division III championship game. It finished with a 28-5 record, losing three times to arch-rival Amherst, dropping the season opener to Southern Vermont — in a game played at MCLA because the Ephs were hosting the NCAA Division III volleyball tournament, and losing to Wisconsin-Whitewater in the national championship game.

When there are five, double-digit scorers on a team, one guy scoring in single figures won’t cost a game.

Robinson did not reach double figures in three games, scoring nine against RPI on Dec. 3, 2013, seven against Trinity on Jan. 10, 2014, and nine against Amherst on Jan. 22. The Ephs went 2-1 in those three games, losing only to the artists formerly known as the Lord Jeffs.

Actually, it would be fair to say that only Dave Hixon’s Amherst team actually shut Robinson down. The Eph freshman had nine points on 4-for-13 shooting from the floor and he was 0 for 5 from 3-point range. Mayer had 27 points and Wohl had 17 in an 82-70 loss at Chandler Gym. That is why Hixon is a Hall-of-Fame coach.

The same could be said in the 80-60 win over Trinity. Robinson was 3 of 8 from the floor, but four other Ephs scored in double figures. Epley led the way with 13, Mayer and Ryan Kilcullen had 13 each and Rooke-Ley had 11.

“You can’t shoot the ball if you don’t have the ball,” Miami’s Jimmy Butler said when asked about Robinson’s Friday performance, which included him going 7 for 13 from 3-point range. “I think he was getting lost in trying to get other people open. Then everybody’s going to react to him, probably moreso than they’re going to react to me. A three is worth more than a two. So as long as he’s coming to the ball, shooting the ball when he’s open, when he’s not open, that’s the Duncan Robinson we need.”

“I understand that nothing is guaranteed,” Robinson said back on NBA Finals Media Day. “Throughout my career, there’s one thing I’ve learned is not to expect anything.

“I’m incredibly grateful to be in this situation, humbled by it in many ways.”

Oh, and about the Tim Layden Tweet, nobody at Colby could suggest that. In a 69-62 win in Williamstown, Robinson was 9 for 9 from the floor, 3 for 3 from 3-point range and 6 for 6 from the free throw line for 27 points. That is perfection.