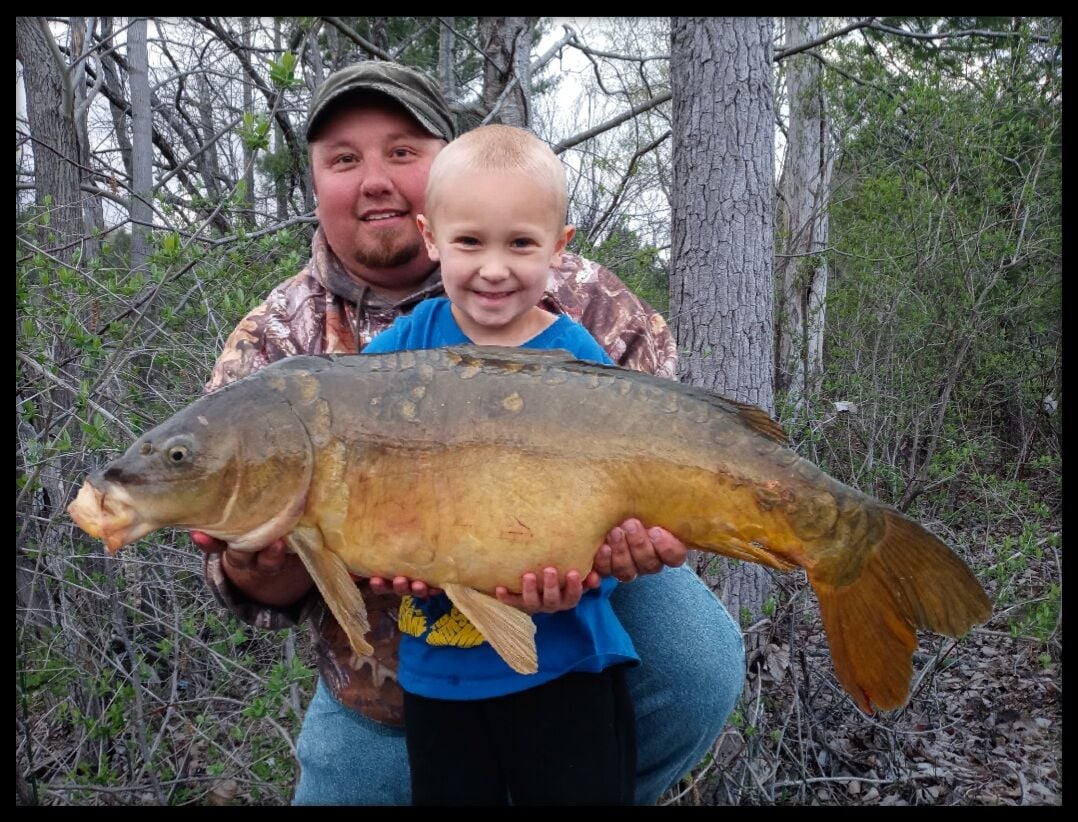 Gabriel Christman, 5, and his dad Joshua pose with a 21 1/2-pound carp Gabriel fished out of Laurel Lake. 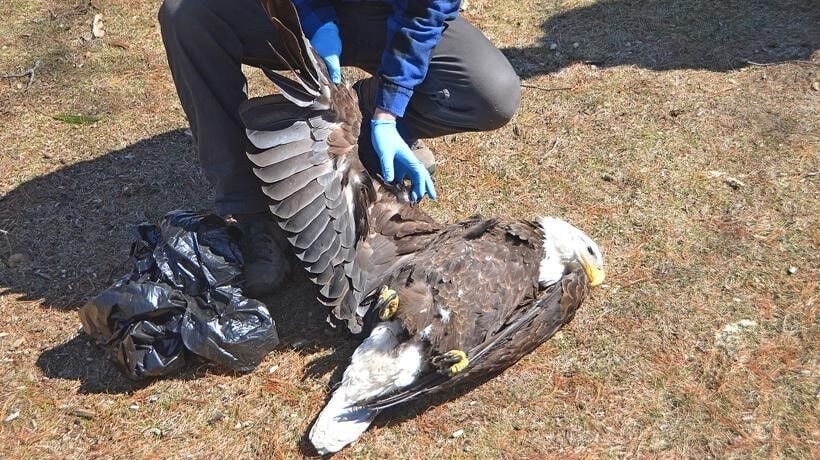 James B. Condon Jr., of MassWildlife, photographs a dead bald eagle found on the Charles River in Middlesex County.

Gabriel Christman, 5, and his dad Joshua pose with a 21 1/2-pound carp Gabriel fished out of Laurel Lake.

James B. Condon Jr., of MassWildlife, photographs a dead bald eagle found on the Charles River in Middlesex County.

In mid-March, observers reported odd behavior of an adult female eagle at a nest located on the Charles River in Middlesex County. Unfortunately, within a day, the bird had died on its nest. MassWildlife officials retrieved the eagle and transported it to Tufts Wildlife Clinic at Cummings Veterinary Medical Center at Tufts University where a necropsy was performed. Toxicology testing of a liver sample was performed with the assistance of the Northeast Wildlife Disease Cooperative. Both the necropsy and toxicology test results confirmed that the cause of death was lethal levels of SGAR.

Anticoagulant rodenticides are a type of rodent poison that kills by preventing blood from clotting normally, resulting in a fatal hemorrhage. Wildlife can be poisoned by these in two ways: 1. primary poisoning when an animal directly eats the bait and dies several days later, or 2. secondary poisoning when a predator or scavenger eats prey that has consumed the bait. Secondary poisoning has been documented in birds of prey like hawks and owls, as well as foxes, bobcats and coyotes. While bald eagles primarily eat fish, they are opportunistic foragers that feed on a variety of animals and are known to scavenge or prey on small mammals.

Given the hunting range of eagles, it’s impossible to determine the exact source of this rodenticide poisoning. Analysis of liver tissue confirmed three different SGARs were ingested by the eagle. In the past 15 years, the US EPA has taken steps to impose restrictions on certain rodenticides. SGARs are believed to be most harmful to wildlife and now cannot be sold through general consumer outlets for the typical homeowner to use. SGARs can still be purchased online in commercial use quantities, and licensed pest professionals and agricultural users are able to use them. Other rodenticides, called first-generation anticoagulant rodenticides (FGARs) and non-anticoagulant rodenticides, are still approved for residential consumer use if enclosed within a bait station.

“The struggle to control mice and rats is usually viewed in terms of humans vs. rodents, but wildlife such as birds of prey are often not recognized as players in this battle,” said Dr. Maureen Murray, Director of Tufts Wildlife Clinic. “Many people are surprised to learn that the mouse poison they use in their basement can also kill the great horned owl hooting in the neighborhood.”

Studies in other species of birds of prey conducted at Tufts Wildlife Clinic have shown widespread exposure to SGARs among these birds. MassWildife officials, in partnership with Tufts Wildlife Clinic, provide the following advice for homeowners with a rodent problem to minimize harm to wildlife:

Rodent-proof your home. Before using a poison, remove or securely contain any potential food sources for rodents. Repair any exterior areas of your home to prevent rodents from coming inside.

Arm yourself with information. Consider alternatives to poison, such as snap traps. Poisons should be used as a last resort. Be sure to check the active ingredients and opt for products that contain bromethalin, chlorophacinone, or diphacinone. Use poisons only in bait stations as per the label instructions and avoid any in pellet form.

Ask your pest control company questions. Look for an integrated pest management company that uses multiple approaches to pest control instead of relying solely on poisons. You can request that the company avoid using SGAR products.

According to MassWildlife, the overall population of bald eagles in the state continues to recover and grow in numbers and geographic distribution. There are currently over 80 pairs of bald eagles nesting in Massachusetts, from the Cape to the Berkshires. According to observers, within a week of the above referenced female’s death, another adult female eagle was observed at the nest with the male adult. “The appearance of a new female in such a short period of time speaks to the state’s robust eagle population,” said Andrew Vitz, MassWildlife’s State Ornithologist.

With MassWildlife currently liberating thousands of plump trout into our local waters, this column has primarily focused on them lately. But, as the inset photo demonstrates, there are other fish, such as carp, cruising our waters just waiting to challenge the anglers. Five-year-old Gabriel Christman, already a State multi-gold pin winning angler, took up the challenge and you see who won. He recently landed a 21 1/2-pound Mirror Carp, caught out of Laurel Lake. His father, Joshua Christman, said that Gabriel, who was “super excited,” had no help reeling in the fish which he caught on a medium rod, 8-pound test line with a worm. This is his new personal best, and will undoubtedly get him another State pin, perhaps another gold one.

Just a friendly reminder that anglers don’t need to have a Massachusetts freshwater fishing license to fish on the weekend of June 5 and 6. Wish to fish out of state? Well, Maine’s free fishing weekend is also June 5 and 6. New Hampshire has a free fishing day on June 5, and Vermont’s day is June 12. Connecticut’s free day is June 20 and New York’s free fishing days are June 26 and 27. Might as well try them out. Who knows, you may discover a new favorite area to fish.

MassWildlife recently reported that its staff removes over 100,000 pounds of trash from its Wildlife Management Areas every year, but they can’t maintain these special places alone. They recently took a moment to thank each and every one of you who help them improve their corner of the world. “Taking care of our planet is an important responsibility, and the outdoors are better when we can enjoy it together,” they said.

Personally, I hope these people aren’t trashing our WMA’s in front of their kids, elsewise this nasty practice will be passed from generation to generation. Terrible thought, ey?

By popular demand, the Lee Sportsmen’s Association will be having its Ladies Night Fun Shoots. They begin on May 11 at 6 p.m., with a safety briefing for all shooters at 5:45. New or inexperienced female shooters are welcome. If you have no gun or equipment, LSA can provide safety equipment, firearms and instruction. Due to the national ammunition shortage, ammo cannot be provided; so, participants will need to supply their own ammunition (.22 long rifle, 9mm, or .380). Focus is on shooting fundamentals and having safe fun. The cost is $3 for members, $5 for non-members. Cold Range Rules apply; gun handling only at Safety Table. For those with their own equipment: five magazines are recommended. Future dates are June 15, July 13 and August 17. For more information on these events, required equipment and costs, click onto info@leesportsmen.com or call/text Stephanie DuPont at 215-668-7808.

Another bald eagle was found dead in Massachusetts, the victim of rodenticide or pesticide. Also, it appears the disease killing birds in parts of the country overrun by cicadas, will not be effecting the New England area.