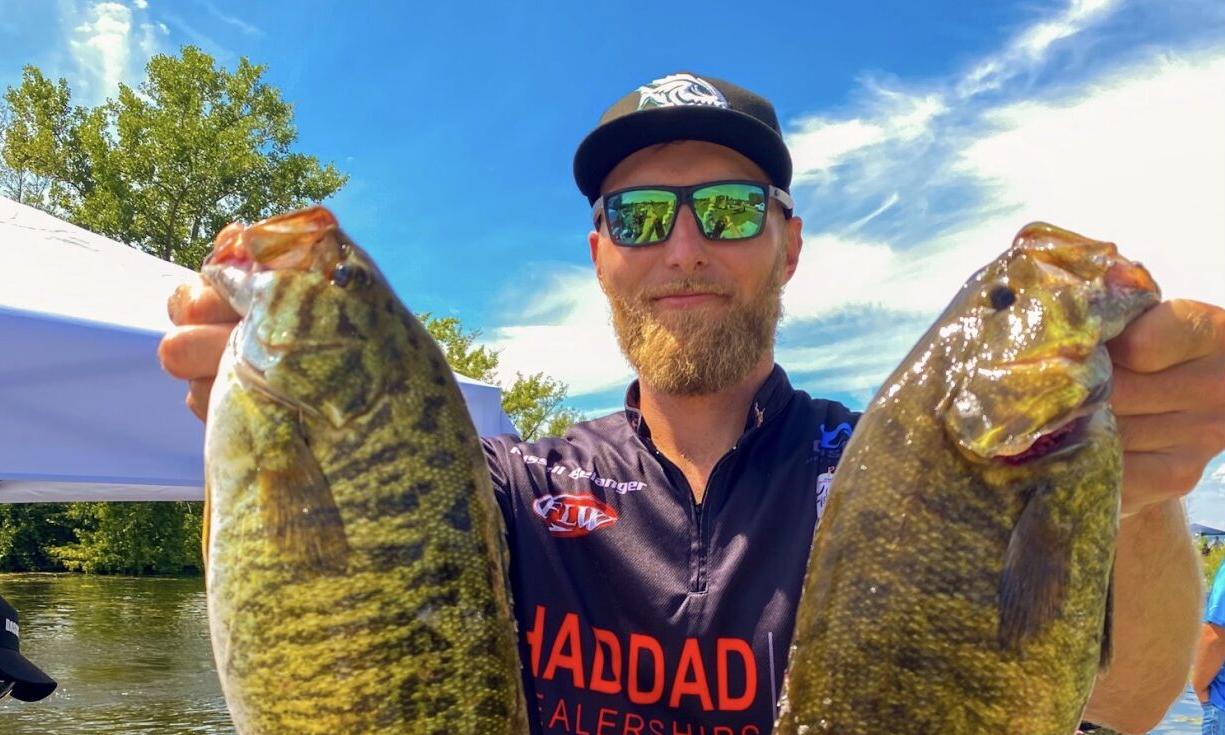 Great Barrington’s Russell Belanger holds up a pair of large Smallmouth Bass that he caught while placing second overall in the B.A.S.S. Nation State Championship tournament. 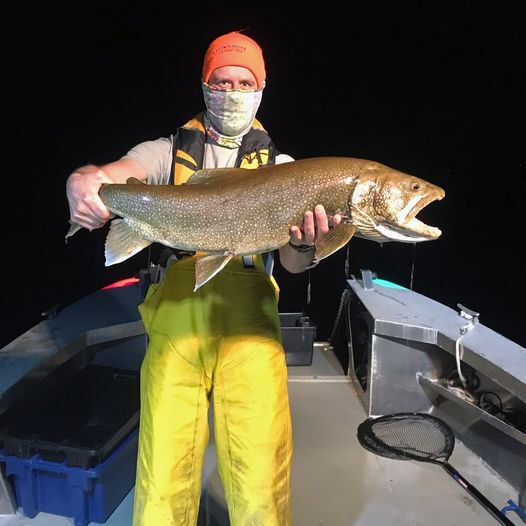 A DFW staff member holds up a 17.7-pound, 37.2-inch lake trout fished out of the Wachusett Reservoir.

Russell Belanger, a tournament bass angler from Great Barrington, will be participating in the B.A.S.S. Nation Regional Championships in 2021.

Belanger will be part of 10 qualifying anglers from Massachusetts. He and local co-angler Asher Hotson of Lenox recently participated in the B.A.S.S. Nation State Championship tournament which was held on Oct. 3-4 on the Oxbow Section of the Connecticut River near Northampton. Russell came in second place as a pro, and Asher came in third in the Co-Angler Division. Normally, the two-day state championship is held out of state, but this year, being unique because of COVID-19, the championship was held in smaller local waters. Belanger had a two-day weight total of 17 pounds of Smallmouth Bass, including a Day 2 Lunker Smallmouth in the Pro Division. Hotson managed the Day 2 Largemouth Lunker in the Co-Angler Division.

When I asked Russell about what he thought of the tournament on the Oxbow, he said, “It’s known for being the best Largemouth fishing section of the Connecticut River. The fishing was tough on the anglers who targeted Largemouth that weekend. There were plenty of guys that came to the scales empty-handed on Day 1. Most guys who fish this event simply want to finish in the top six and make the state team. That was my goal.”

By virtue of finishing in the top of the field, Belanger and Hotson qualified for the regional championships in 2021. The regional championships will be comprised of 10 boaters and 10 co-anglers from Massachusetts. They will compete against the top Pros and Co-Anglers from all states of the entire eastern seaboard, (15 states represented by 150 boats) it’s a big deal. I asked Russell if he knows where the 2021 Regional Championship will be held. “There’s talk it will be on Lake Erie. Anywhere with Smallies is fine with me,” he said.

What were his secrets for success?

Belanger said, “When Asher and I were pre-fishing for the tournament, we noticed how difficult it was to get Largemouth bites. I got the sense that the tournament weights were going to be much lower than normal. A five-fish (Smallmouth) limit each day of the event was better than grinding all day for one Largemouth bite. This is what shifted my decision to stay on the main river and go for Smallmouth. It didn’t take long before I realized that not only could we catch quantity Smallmouths, but I was really impressed by the size we were getting. I’ve fished inside the Oxbow before, but this is the only section of the Connecticut River that I have never fished before the week of the tournament. It’s a dangerous section to navigate, but we spent almost an entire day just mapping safe routes and marking hazards. The water level was low and a lot of the marker buoys were already pulled out for the season. I believe this extra time is what separated me from the rest of the field and helped me find better spots that I could have to myself. I also fished a technique that I learned from hundreds of hours fishing in the current on the St. Lawrence River over the past few seasons. I was drifting my bait in the current instead of casting. This style of Smallmouth fishing requires some practice and patience. It proved to be extremely effective on the Connecticut River as well.”

Based upon the pictures of the large bass that he has sent me he appears to be quite an exceptional fisherman. Check out some of them and find out about him on his Instagram page @RussBelangerFishing or his Bass Fishing Guide page @HiddenGemBassGuide_NE. He runs a guide service that will take you out on some local spots, or do trips to bigger regional lakes. Belanger and Hotson will be seeking local sponsorship to help with the expenses of traveling to the Regional/National Championships next year. You can find them both on Facebook or Instagram.

“I don’t think a lot of people in the Berkshires understand there is something like B.A.S.S. Nation,” says Belanger. “The B.A.S.S. Nation State Championship is a cool story, but the important part is the opportunity to fish the regional (tournament) as a member of the MA State Fishing Team. It’s the first step for a tournament angler like myself, to potentially qualify for a National Championship or hopefully the Bassmaster Classic.”

Each fall, MassWildlife samples the Quabbin and Wachusett Reservoirs to monitor lake trout populations and examine population characteristics. Lake trout typically spawn in late October and November when the surface water temperatures are around or below 50°F. The spawning grounds are typically shallow, rocky waters on windy shores of the reservoirs; spawning occurs mostly after dusk. Night sampling on big waters can be cold and icy in November, but the information it provides biologists is well worth the effort.

To capture lake trout, field crews set nets on spawning areas starting at sunset and check them about every 20 minutes. Captured fish are removed from the nets and placed in a live well. Next, biologists record length, weight and sex, and implant a small Passive Integrated Tag (PIT) in the fish. Prior to release, the adipose fin is clipped to provide an external mark indicating that the fish has been captured before. Data collected provide biologists with an understanding of the current condition of lake trout populations.

If fish are recaptured from previous tagging efforts, biologists can calculate individual growth rates. Lake trout are long lived and slow growing and it is not uncommon for a tagged fish to be recaptured 10 years later. In fact, the longest recapture interval recorded was 24 years! When other species like landlocked salmon, smallmouth bass, rock bass, and white perch are captured, biologists record information including length, weight, and sex, but do not implant PIT tags. Sampling efforts like this are just one way that MassWildlife monitors the health of the fish resources of the Commonwealth.

Look at the 17.7-pound beauty measuring 37.2 inches they took out of Wachusett last week!

Readers may be wondering why I am featuring two fish articles in November, the middle of hunting season. Well, thanks to COVID-19, the DFW District offices are closed and hunters have been encouraged to check in their deer/bear online rather than at the DFW Regional Headquarters in Dalton. This year hunters may report online during both weeks of shotgun season.

Long story short, I am unable to get the usual local information such as the deer sizes, number of points, hunters’ names, town of the harvest, etc., from the DFW Field Headquarters in Westborough. It’s a bummer.

I guess we will have to wait until the Division gets around to reporting them in a press release.

"I got the sense that the tournament weights were going to be much lower than normal. A five-fish (Smallmouth) limit each day of the event was better than grinding all day for one Largemouth bite. This is what shifted my decision to stay on the main river and go for Smallmouth. It didn’t take long before I realized that not only could we catch quantity Smallmouths, but I was really impressed by the size we were getting."