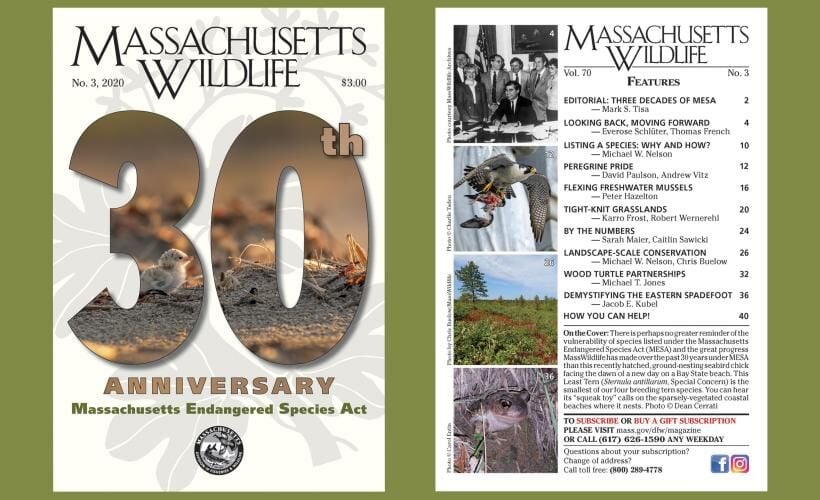 The cover of the MESA 30th anniversary Massachusetts Wildlife Magazine. 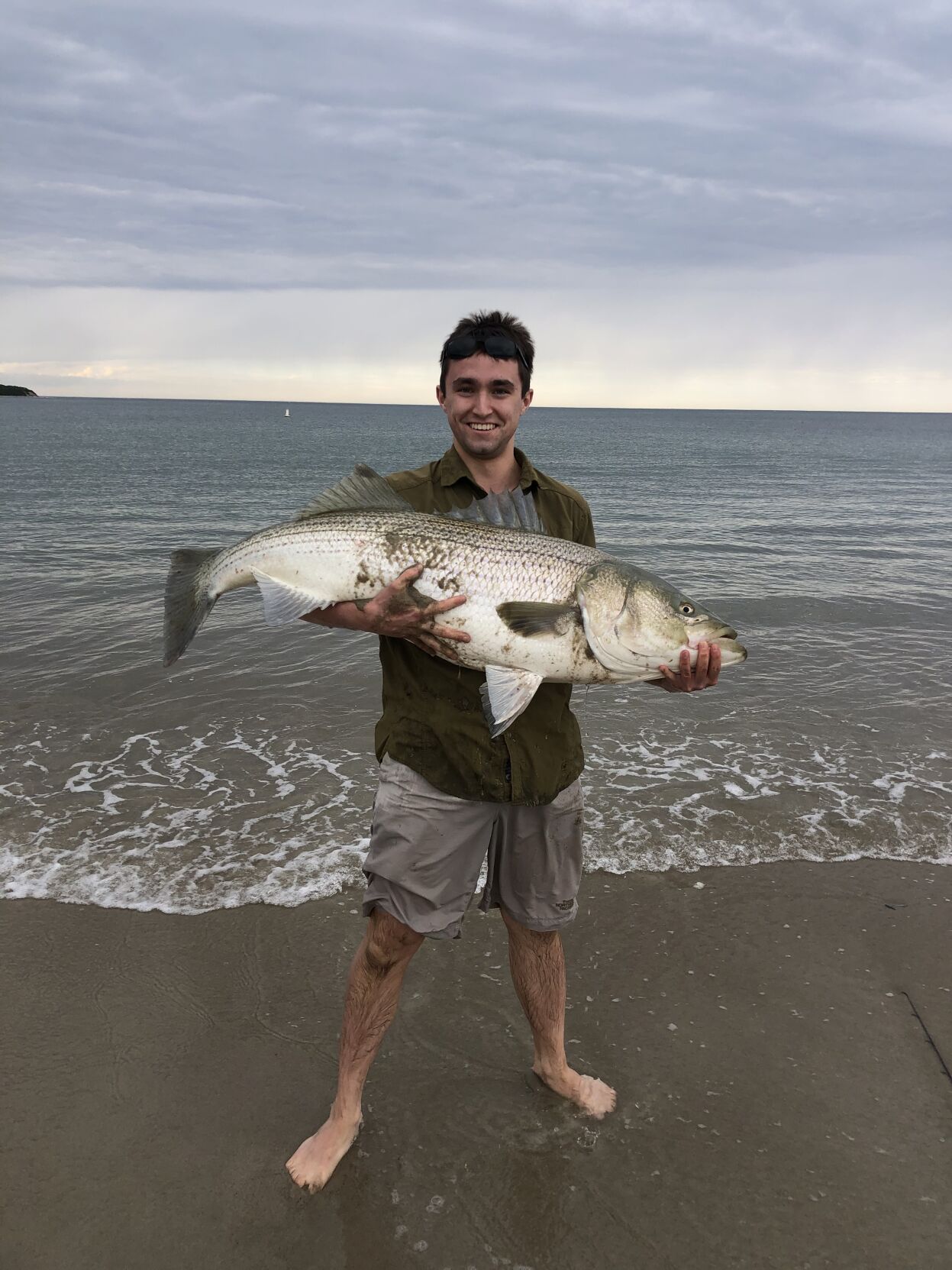 The cover of the MESA 30th anniversary Massachusetts Wildlife Magazine.

Throughout 2020, MassWildlife has been celebrating the 30th anniversary of the Massachusetts Endangered Species Act (MESA). As part of this celebration, they excitedly announced that the latest edition of Massachusetts Wildlife magazine is a special issue devoted entirely to endangered species conservation. Articles and images showcase a variety of rare plants and animals and the conservation work that MassWildlife staff and partners are conducting to protect these species and habitats.

If you aren’t familiar with Massachusetts Wildlife, it is a great magazine for people with a wide variety of interests in nature, outdoor recreation, and conservation. You can get all the inside information on wildlife and fisheries management, endangered species restoration programs, critical habitat protection, outdoor recreation, and the exceptional people who are working to conserve our outdoor resources in Massachusetts.

I received my copy last week and, after reading it, I was going to give a brief synopsis of the issue in this column. But, whoa Nelly! That issue is so packed with important information, much of it historical, that I’m afraid I may screw some of it up by condensing it in some way. Get yourself a copy because it is a classic that you may want to keep on hand for future references.

· Order the special issue (one issue for $3). If ordering a single issue, send order requests to: Magazine Subscription, Division of Fisheries and Wildlife, 251 Causeway Street, Suite 400, Boston, MA 02114. Include the name and mailing address of the subscriber, the special issue you are requesting, and a check payable to “Massachusetts Wildlife Magazine”

Nice striper haul by James FortinBefore striped bass (Striper) fishing is over on the Massachusetts coast, I would like to relay a fish story that I received via e-mail about James Fortin of Ipswich. James, who has local ties to the Berkshires, advises us that back in July he was at Crane Beach in Ipswich on Cape Ann in sight of the Littleneck Area hoping to catch a few small striped bass (called schoolies). As James tells it, he “was using a 20-pound braided test line and a No. 6 octopus hook. He had spotted small schools moving with the tide approximately twenty feet off shore but was having no luck catching one. He was down to his last piece of clam which he was using for bait. Following his cast, something struck the line and immediately proceeded to run out approximately half of the line on his reel. Not realizing what it was, but knowing that the line would probably break if it encountered any resistance, he began running along the shore line at the beach in a southerly direction to try to keep the tension off the line. At one point he had to call out to a woman in the water ahead of him so that she would not be inconvenienced by the line as it and he passed by her. She realized what was happening at the last instant and obliged by moving backward. After about perhaps 150-to-200 yards the fish tired and he was able to reel it into shallow water. It turned out to be a large striped bass. As James is a “catch-and-release man” he knew he had to act quickly. He removed the hook, posed for the picture above and returned the fish to the water all in less than 60 seconds. According to James, within the next minute the fish responded to the water and swam away. He estimates the fish to have weighed between forty and fifty pounds. Well, based upon the length of the fish, several veteran striper fishermen think it might be 48 inches and closer to 35 lbs. Still, it was a very respectable fish.

Currently, James is a junior at Williams College and a member of its Fishing Club. One of his favorite fishing spots in the Berkshires is the crossroad near the Ashuwillticook Rail Trail at Cheshire Lake where he had caught his first fish there as a young boy. Thanks to John and Mary Ellen Donna for passing the story onto us about their 21-year old grandson James.

Annual paraplegic huntEach year, about 25–30 paraplegic hunters sign up for the special paraplegic hunt. For many, it’s the only opportunity they have to hunt. The hunt is typically held at five sites, but this year there was no hunt in the Northern Berkshire site.

This year the hunt took place from Thursday, Oct. 29 through Saturday, Oct. 31. Only two paraplegic hunters were able to get out hunting this year in the Berkshires and they hunted out of the Southern Berkshire area. They were Vyto Sablevicius of Norwich, Mass., and Greg Baumli of New Lebanon, N.Y.

I visited the Southern Berkshire site near Mount Everett on Thursday, the first day of the hunt and it was a raw and rainy day. Unfortunately, because of the Covid-19 virus, the DCR Headquarters at Mount Washington State Forest was locked shut and no one could gain access to get out of the elements or gain access to the bathrooms. No cooking or dining was allowed inside.

Otto Maier, owner of O’s Hillside Diner in Hillsdale, heard of their plight and donated free meals to the hunters and volunteers for the three-day period, although I am not sure if anyone took advantage of the offer. Craig Willis of White Wolf Construction donated a porta-potty, Chuck Pickert, who normally provides meals using his portable smoker was not allowed to prepare any of his outstanding food as he has done in the past. A volunteer did bring a gas grill and they cooked pork chops, others brought a couple of tarps to cover them from the rain. I didn’t stay long on that day and was unable to make it there on Friday or Saturday.

Friday morning was cold with a heavy frost and later on it snowed some 6 inches on Mount Washington that day. Saturday was a better day, but quite windy.

No one bagged a deer over the weekend, although they did see a deer. Perhaps most deer just hunkered down during the nasty weather.

2020 Youth Deer Hunt DayMassWildlife created Youth Deer Hunt Day to allow young hunters to hunt deer with their own permit. The hunt occurs on a special one-day season before the state’s annual deer hunting seasons. Shotgun deer season regulations applied during the hunt. Licensed hunters who hunt other animals on this date must follow special restrictions.

This year 1,071 young adults participated in the Youth Deer Hunt Day which was held on Oct. 3. The preliminary harvest total was 120 deer reported through the online MassFishHunt system. The number of hunters appears to be holding around 1,000 each year. The harvest totals for the previous five years were as follows from year 2015 through 2019: 146, 131, 118, 138, and 89.

Thank you, vetsIf you happen to be out and about enjoying your favorite outdoor sport on Veteran’s Day, you might want to take a moment or two to remember and thank the veterans who sacrificed so much for our country. Shamefully, someone recently referred to them as suckers and losers. Well, some of us suckers took great offense at those words, and did not forget them when we stepped up to the voting booths last week.