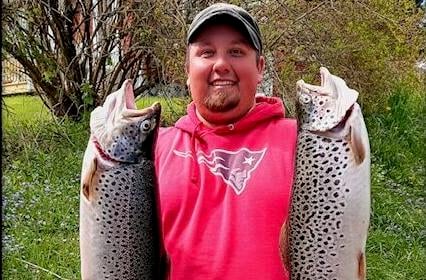 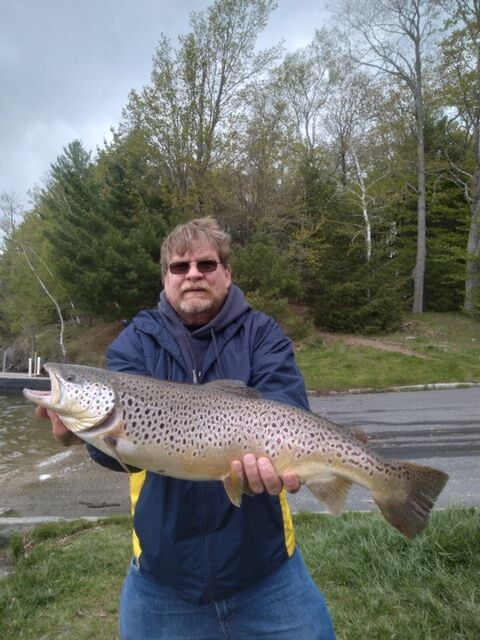 Last week, Mark Lucier, of Pittsfield, caught some of them. Using a spinning outfit with 8-pound test line and a spinner, he landed over a dozen trout, including three brown trout which he estimated to be around 10 pounds, several brook trout over 19 inches and rainbow trout over 4 pounds. He released all of the trout except for one 10-pound brown that was hooked badly, was bleeding and would die anyway. That one he gave to his sister because she asked him to bring her a trout to eat. I’d love to see the look on her face when Mark delivered that behemoth.

Other lucky anglers were Joshua Christman, his daughter Alice and son Gabriel of Pittsfield. According to Joshua, they released between 20 and 30 trout in the 6-to-8-pound range. His 5-year-old son caught two browns weighing about 10 pounds and his daughter Alice caught one weighing 9.98 pounds. He weighed them on his own scales which he claims are certified. Joshua said that one of the trout was 28 inches long with an 18-inch girth. He froze two 10-pounders so that he can have them mounted and another one he gave away to someone. They caught their fish on minnows and spinning lures.

According to Joshua, word must have spread like wildfire, for shortly thereafter a flock of anglers arrived and began catching large trout, too.

I contacted the MassWildlife District Headquarters in Dalton to find out what gives. Aquatic biologist Leanda Fontaine Gagnon said that each year a district is allotted a certain number of broodstock trout from the hatcheries. This year it was Onota Lake’s turn to get some which came from the Roger Reed Hatchery in Palmer. Anglers who were at the right place at the right time experienced some fantastic fishing.

Leanda also said that all of these broodstock trout qualify for the Freshwater Spotsfishing Awards Program.

MassWildlife advises us to wear our life jackets when boating this spring. Boating safety advocates recommend that all boaters and passengers not only have a life jacket, but wear it at all times while boating. In Massachusetts, life jackets must be worn by canoeists and kayakers from September 15 to May 15. Youths under 12 years old, personal watercraft users, waterskiers and stand-up paddleboard users must wear them all of the time.

As warmer weather sets in, Massachusetts boaters and anglers are eager to take to the water and in honor of National Safe Boating Week (May 22–28), the Massachusetts Environmental Police and MassWildlife remind boaters and anglers to think of safety first when enjoying the water by wearing life jackets, knowing your boating capabilities, and practicing safe social distancing.

The early warm days of spring can mask water temperatures that are often dangerously cold. If you capsize or fall overboard, you can succumb to hypothermia within minutes. Hypothermia is the lowering of the internal body temperature. This temperature drop can make it difficult for you to swim, paddle, or stay afloat. A sudden, unexpected fall into cold water can also cause you to involuntarily gasp and ingest water, which can lead to death by drowning. While most life jackets will not prevent hypothermia, they do help you stay afloat. Wearing a properly fitted life jacket (personal flotation device) could save your life. Many boating fatality victims fail to wear a life jacket.

Click onto the MassWildlife web site to learn more about life jackets, including how to select the right type of life jacket for you, how to get a proper fit, and how to properly care for your lifejacket.

It’s all over after today, Saturday, May 22. It’s time to clean and oil your pea shooter and lock it up until next fall. The next time hunters will have a chance to bag a turkey in Massachusetts Zones 1 through 9 will be when the fall turkey hunting season opens on October 18 and runs through November 27.

There are indications that it was a good hunting season. Pleasure was expressed at the last Fish & Wildlife Board Meeting (held on May 17) as to how nicely the turkey population has spread into areas where they hadn’t been seen before. Still, there are others who claimed that the numbers of turkey seen, especially in Zone 2, was way down. Go figure. We’ll have to wait and see what the spring tally was. Hopefully very few people were bitten by deer ticks.

Now it’s time for the hens to hatch and raise their chicks. MassWildlife asks that you keep a log of turkey and poult sightings during the months of June, July and August so that they can get a feel for the flock size and health. Click onto the MassWildlife web site to download the turkey log.

In his May report to the Berkshire County League of Sportsmen (BCLS), DFW Western District Supervisor Andrew Madden reported that MassWildlife and the Massachusetts Department of Fish & Game added three new parcels in the Western District this past April. He noted that all three acquisitions build on existing Wildlife Management Areas (WMA) and are open for hunting, fishing, and trapping. They are as follows:

Maple Hill WMA — 12 acres on the East Side of the Williams River. This property gives MassWildlife potential to improve access to Maple Hill from the east.

Also at the May BCLS meeting, Madden reported that the annual public hearing to set dates for migratory bird hunting was held on April 23. Some notable highlights that were approved by the Fisheries and Wildlife Board were as follows:

The statewide early goose hunting season was moved forward to Sept. 1, which is the earliest date allowed under the federal framework. In the past, the opening day was Sept. 8.

The Woodcock hunting season remains on Oct. 1. This year, it was originally recommended to the F&W Board to move it to Oct. 7, but the recommendation was not approved in response to public concerns, including the those of the BCLS.

Opening day for duck hunting will now be on the Oct. 11 holiday for both the Berkshire and Central Zones. Over the past year or so, the Berkshire season opened the day after Columbus Day, which never made any sense to local hunters. Why force them to take a vacation day from work, rather than to open the season on the holiday which had been done for many years in the past. Duck hunters can thank Western District F & W Board member Steve Sears of Dalton for strongly advocating on their behalf.