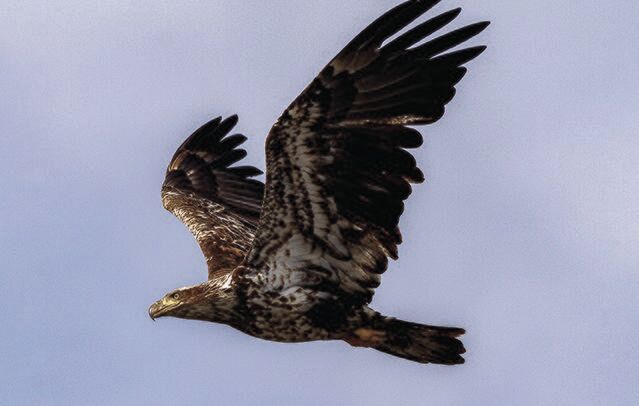 An eaglet like this one was found dead in Middlesex County in July. A necropsy found the bird died due to lethal levels of anticoagulant rodenticides. 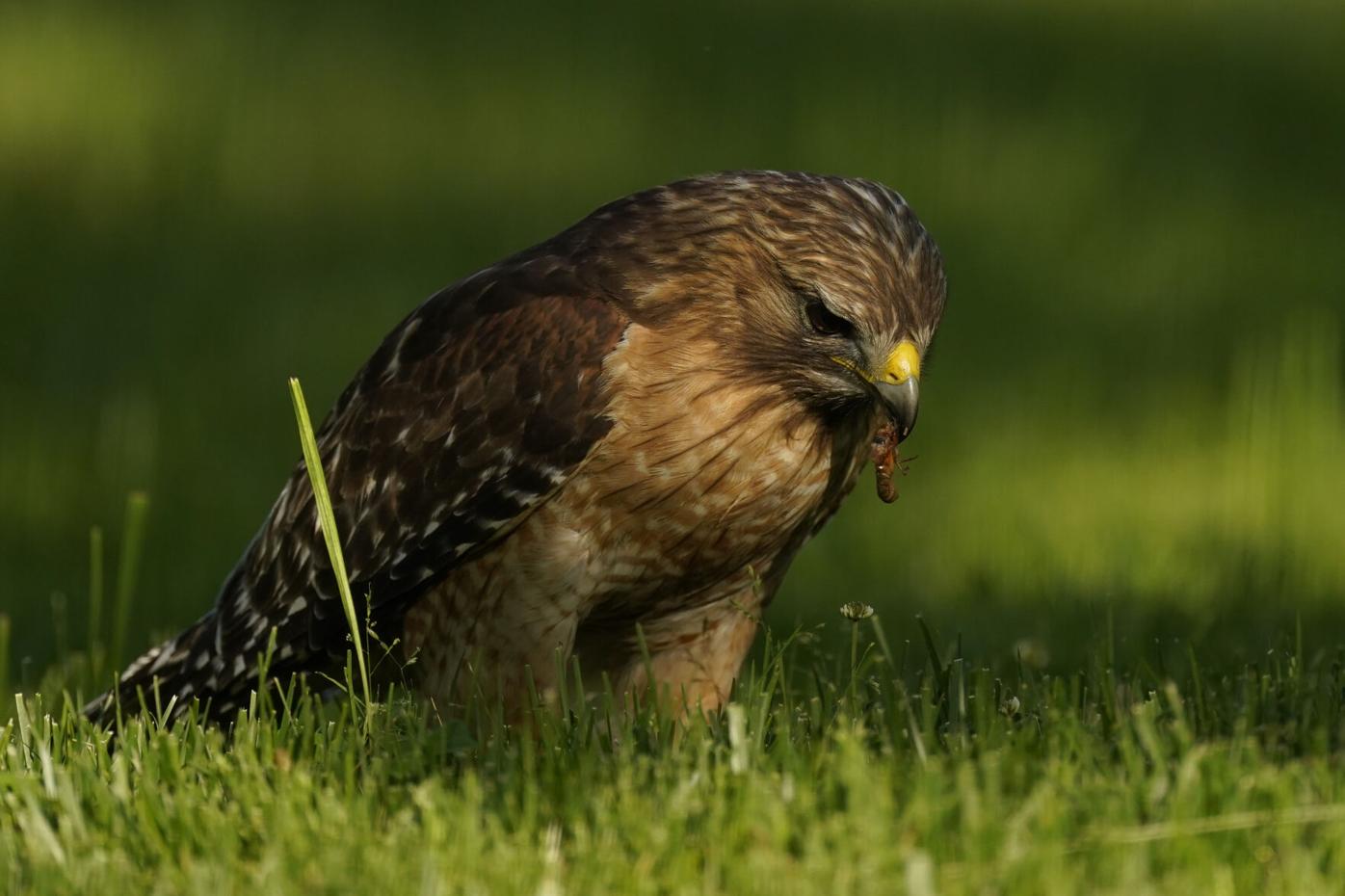 A red-shouldered hawk holds a squirming Brood X cicada nymph in its beak as it feeds in a lawn in Columbia, Md this past May. 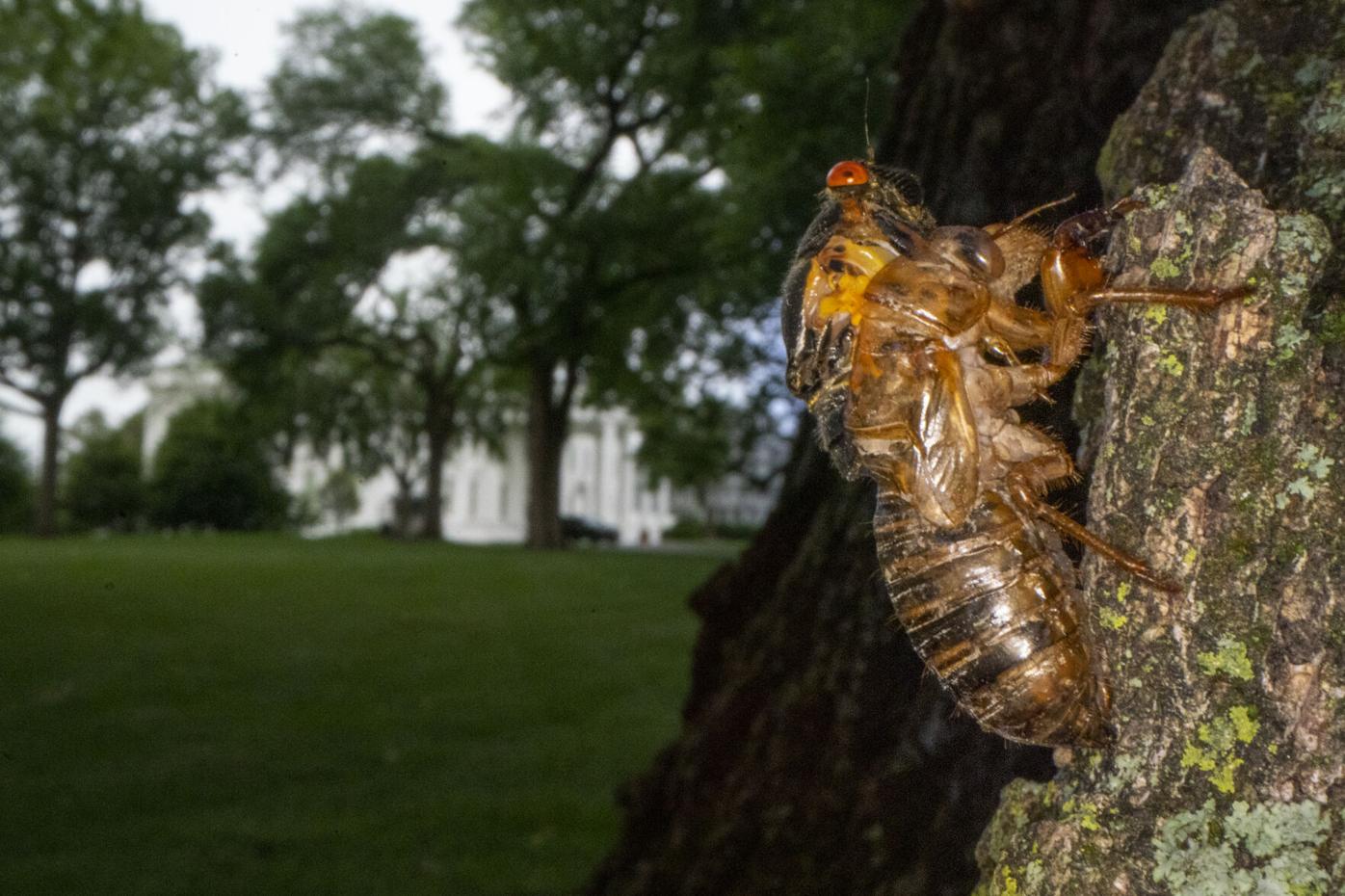 A Brood X cicada that failed to shed its nymphal skin is seen on a tree on the North Lawn of the White House in Washington, in May. Reporters traveling to the United Kingdom ahead of President Joe Biden’s first overseas trip were delayed seven hours after their chartered plane was overrun by cicadas. The Washington, D.C., area is among the many parts of the country confronting the swarm of Brood X, a large emergence of the loud 17-year insects.

This Jan. 30, 2020 photo shows the carcass of a puma who was found dead north of the Santa Monica Mountains. National Park Service researchers have documented the presence of anticoagulant rodenticide compounds in 26 out of 27 local mountain lions that they have tested, including in a three-month-old kitten.

In late July, a female fledgling eaglet in obvious distress on the ground in Middlesex County was transported to and admitted by Tufts Wildlife Clinic in North Grafton. Unfortunately, upon admission to the clinic, the young bird died. A necropsy was performed at the clinic and liver tissue was sent to a lab for toxicology testing. Both the observations from the necropsy and toxicology test results confirmed that the eaglet’s cause of death was due to lethal levels of anticoagulant rodenticides. This is the second documented rodenticide death of an eagle in Massachusetts. The first was an adult bird that died this past March. Over 80 pairs of bald eagles nest in Massachusetts.

Anticoagulant rodenticides are a type of rodent poison that kills by preventing blood from clotting normally, resulting in fatal internal hemorrhage or bleeding. Wildlife can be poisoned by anticoagulant rodenticides in two ways: 1. primary poisoning when an animal directly eats the bait and dies several days later; or 2. secondary poisoning when a predator or scavenger eats prey that has consumed the bait. Studies of birds of prey in Massachusetts conducted at Tufts Wildlife Clinic have shown widespread exposure to SGARs. While bald eagles primarily eat fish, they are opportunistic foragers and will scavenge or prey on a variety of animals.

As noted in my May 8, 2021 column, which dealt with the first eagle’s death, given the hunting range of eagles, it’s impossible to determine the exact source of this rodenticide poisoning. Analysis of liver tissue confirmed two different SGARs were ingested by the eaglet. In the past 15 years, the US EPA has taken steps to impose restrictions on rodenticides. SGARs are believed to be most harmful to wildlife and cannot be sold through general consumer outlets for use by the typical homeowner. SGARs can still be purchased online in commercial use quantities for use only by licensed pest professionals and agricultural users. Other rodenticides, called first-generation anticoagulant rodenticides (FGARs) and non-anticoagulant rodenticides, are still approved for residential consumer use only if enclosed within a bait station. It is illegal to place poisons outdoors except under highly regulated permitting conditions.

“Not only raptors, but many other kinds of wildlife have been the victims of unintentional rodenticide poisoning,” said Andrew Vitz, MassWildlife’s State Ornithologist. “Secondary exposure to rodenticides has been documented in other animals such as foxes, bobcats and coyotes.”

He also noted that other predatory wild mammals and unsupervised dogs and cats are vulnerable to unintended exposure.

MassWildlife and Tufts University are working together to find practical, environmentally responsible solutions to issues relating to rodent problems.

To minimize harm to wildlife and pets, MassWildlife and Tufts Wildlife Clinic offer the following advice for homeowners and other concerned citizens:

“Prevent Rodent Problems: Remove or safely secure any sources of food or garbage that attracts rodents. Keep food for pets, poultry and livestock in animal-proof containers. Rodent-proof your home! Close off or repair any exterior openings in your home and other outbuildings that may allow rodents to enter.

If you have rodents, start with baited snap traps which provide a swift and humane death, and are easy for a homeowner to use. Poisons should be used only as a last resort. If using poisons, use enclosed in bait stations and follow the product label instructions. If you hire a company, choose a licensed integrated pest management company that uses multiple approaches to pest control instead of relying solely on poisons. You can request that the company avoid using SGAR products including brodifacoum, bromadiolone, difenacoum or difethialone.”

As always, if you find a wild animal, and it has clear signs of injury or sickness, it’s best to leave it in the wild. If injury or illness is evident, contact a licensed wildlife rehabilitator for advice before taking any action.

Concerned citizens can also help vulnerable wildlife by sharing this information and advice with friends, family and others. Connect with groups who are working together to find practical, environmentally responsible solutions to issues relating to rodent problems. “The choices we make as individuals and communities regarding rodent control and trash management practices can help prevent wildlife exposure to SGARs,” said Dr. Maureen Murray, Director of Tufts Wildlife Clinic.

Readers may recall that in mid-July, MassWildlife reported an unknown disease was circulating among songbirds in ten states, some as close as Pennsylvania, New Jersey and Ohio. Fortunately, it was not been found in New England. The disease was said to cause symptoms of “eye swelling and crusty discharge, as well as neurological signs.”

Last month, The Ithaca Times reported that experts from Cornell University are not “overly alarmed” by the unknown disease. Elizabeth Bunting, senior extension associate at the Cornell Wildlife Health Lab, said a possible cause of the disease is from the cicadas of Brood X.

Cicada Brood X are emerging this year after 17 years living underground. It is one of the largest and most broadly distributed groups of periodical cicadas. They can be found from northern Georgia to New York, west to the Mississippi River and in the Midwest. There can be as many as 1.5 million cicadas per acre, which brings the brood population into the trillions.

The songbirds that ate these cicadas may have gotten sick from pesticides sprayed on the cicadas, or fungi that the insects might be carrying. The pesticides may be causing neurological issues and the fungi could be the cause of crusty eyes, said Bunting.

The locations where the disease was found are areas where the cicada broods emerged. Additionally, the decrease in cases of the mystery disease has accompanied the retreat of the cicadas.

“Information coming out of the National Wildlife Health Center and some of the other states said that the cases were declining all of a sudden,” Bunting told the Ithaca Times. “That would not be typical of an infectious disease outbreak. You wouldn’t expect an infectious disease to just spontaneously go away.”

The disease was not found in New England because it did not have the massive number of cicadas some other states had.

Brian Evens, bird ecologist for the Smithsonian Migratory Bird Center also suggests that pesticides may be a reason for the bird decline. “Pesticides are of course a potential cause,” he added. “Cicadas have lived underground right underneath us for 17 years and could have been accumulating toxins like pesticides or heavy metals that then the birds could be exposed to in really high concentrations, just because they’ve switched their diet over to cicadas.”

Some scientists feel that the correlation between the disease’s outbreak and the appearance of cicadas appears strong. However; nobody really knows what mechanisms actually caused the disease. Referring to the Cornell hypothesis, they feel that though unproven, it is certainly plausible.

It is not believed that the pesticide problem will be a risk in our area, since we have no periodical cicadas, nor any other insects that become hyperabundant like that. But if there is a fungus involved, infected birds could conceivably carry that part of the condition to New England. They believe that birds’ migratory pattern tends to be southward at this time of year, so infected birds are more likely to remain away from us.

MassWildlife, in an update on July 30, continues to ask people to refrain from feeding birds or putting out birdbaths at this time as a precautionary measure against the disease. They are still investigating the situation, and ask the public to send them information about dead birds. Birds do not need supplementary food at this point in the season. (Removing the bird feeders) will help reduce the amount of interaction among birds, to prevent and mitigate the disease from possible spread.

Researchers across the country are continuing to monitor the mystery disease’s development.

Many thanks to the Ithaca Times for some information provided for this article.