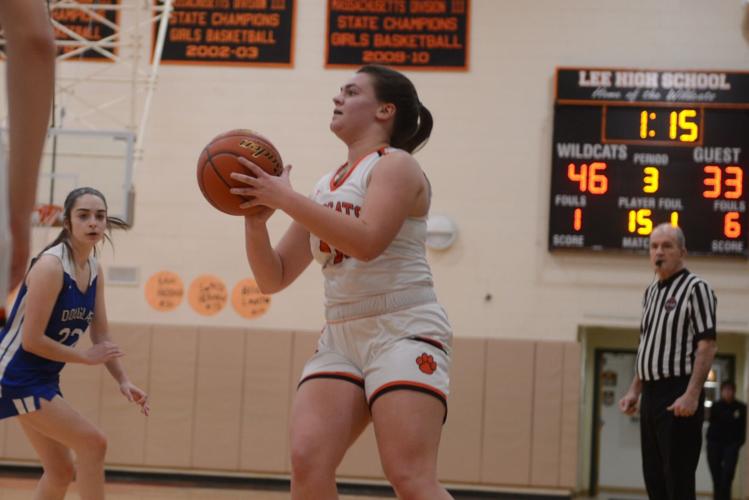 Lee's Caroline Maloney finished with a career-high 46 points as the Wildcats handled Douglas in the D-V Round of 16 on Tuesday. Lee will now turn its attention to playing Hopedale in the Round of 8. 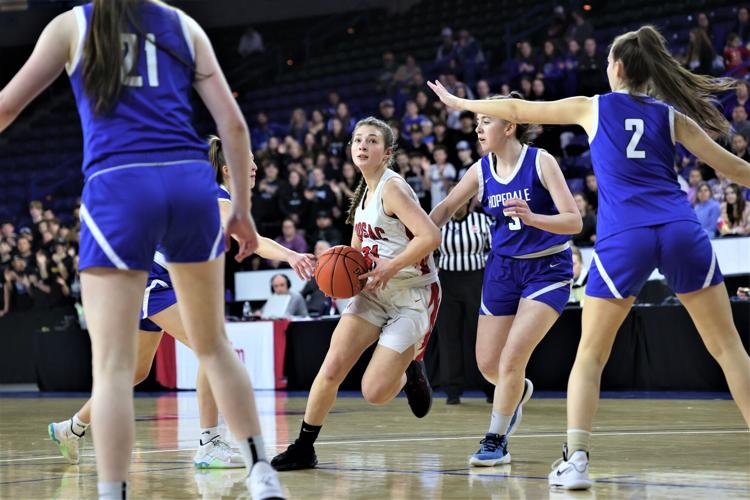 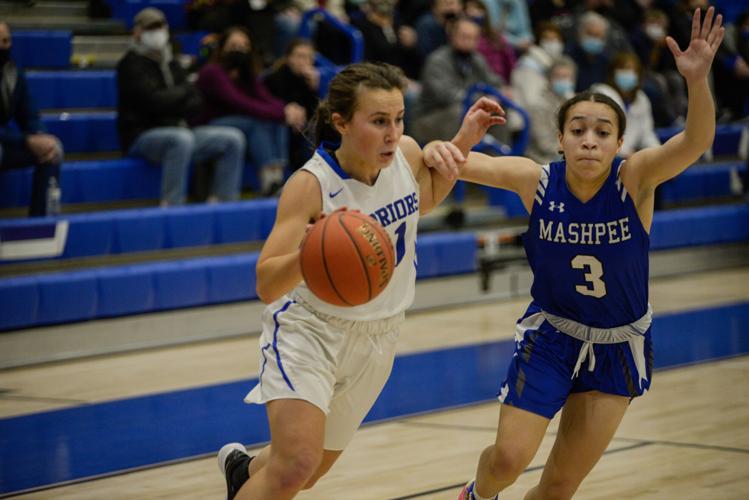 Wahconah's Olivia Gamberoni tries to hold off a Mashpee defender on a drive to the hoop. 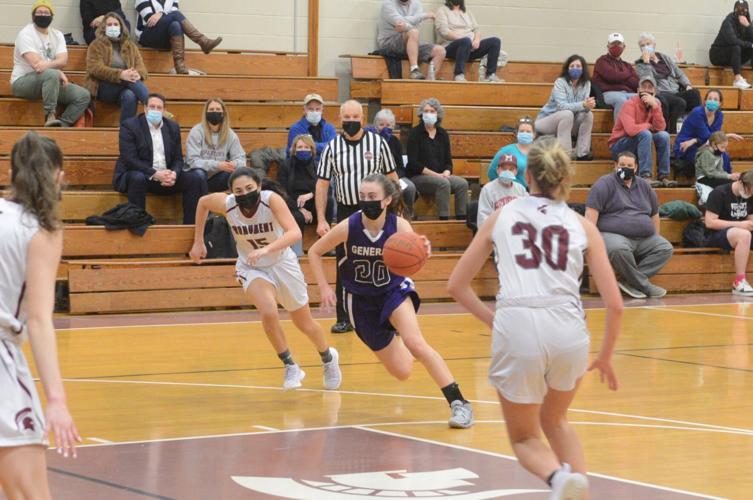 Pittsfield's Jamie Duquette charges into the paint as Monument Mountain defenders try to recover during Thursday's game in Great Barrington. 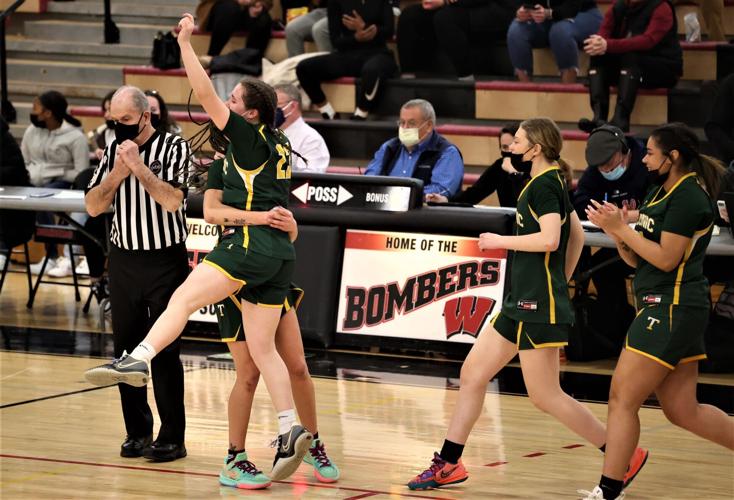 Amelia Leasure and Ahliya Phillips embrace after the final buzzer. 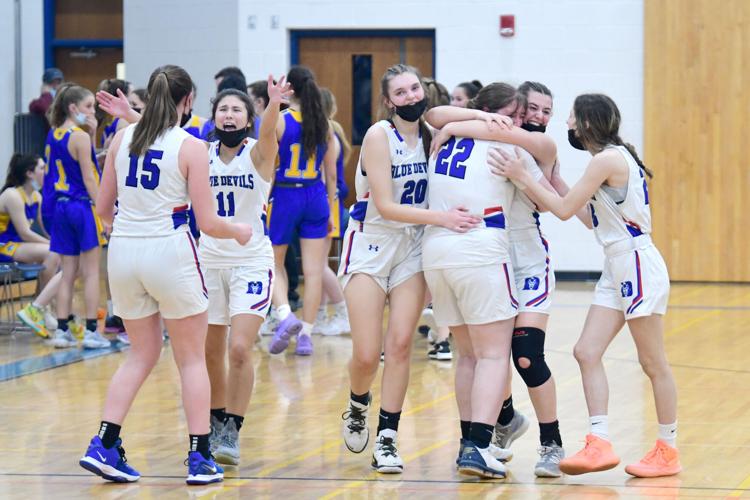 The Drury Girls celebrate their win over Hull in the Division V State Tournament Round of 16 game in North Adams on Monday night. (March 7, 2022. Gillian Jones/The Berkshire Eagle)

Lee's Caroline Maloney finished with a career-high 46 points as the Wildcats handled Douglas in the D-V Round of 16 on Tuesday. Lee will now turn its attention to playing Hopedale in the Round of 8.

Wahconah's Olivia Gamberoni tries to hold off a Mashpee defender on a drive to the hoop.

Pittsfield's Jamie Duquette charges into the paint as Monument Mountain defenders try to recover during Thursday's game in Great Barrington.

Amelia Leasure and Ahliya Phillips embrace after the final buzzer.

The Drury Girls celebrate their win over Hull in the Division V State Tournament Round of 16 game in North Adams on Monday night. (March 7, 2022. Gillian Jones/The Berkshire Eagle)

The floor for the winter sports season was pretty low — playing a full 20-game season after readjusting due to the COVID-19 pandemic.

As athletic directors scurry to finalize rosters and schedules for spring sports, this seems like an ideal time to take one last scan through the notebook and talk about some of our favorite moments from a successful 2021-22 girls basketball season.

I remember sitting in the Drury High School gymnasium on Jan. 23, 2020, thinking to myself that I’ll never see a performance that matches Scott McGuire’s ground-breaking 52 points against the Spartans — it’s a good thing that wasn’t said out loud.

March 8, 2022, Caroline Maloney outscored No. 11 Douglas 24-21 in the first half of a Round of 16 game that saw the fifth-seeded Wildcats advance to the Division V Elite Eight.

“You don’t think of someone having a performance like that... but wow...,” Lee coach Rick Puleri said after watching Maloney drain 11 3-point shots while notching 46 points, the most by any player in Berkshire County this season.

Caroline Maloney was unstoppable on Tuesday, scoring 46 points as Lee advanced to the D-V Elite Eight with a win over Douglas.

Maloney answered the call for a banged-up Lee team and finished eighth in the league in points per game (13.83), right ahead of teammate Emma Puleri, who was ninth (13.50).

LaCasse scored a season-high 38 points against Easthampton, and Wigington lit up Granby for 39 points on Jan. 11.

Layups, jumpers and 3-point shots — more buckets simply equal more fun. With that in mind, it’s hard to ignore a game where a team was held nearly scoreless.

All eyes were watching Cheshire’s student-athletes to see what could happen next. They took a page from Michael Bolton’s playbook — going the distance for a Class. D title and third straight appearance as state-tournament finalists.

During Hoosac’s tournament run, where no team came within 20 points of the Hurricanes until the state title bout, McGrath canned eight 3-point shots in her last home game inside of Hoosac’s gym. The senior finished with 32 points and surpassed 1,000 career points in the process.

Averie McGrath's 32 points did more than put her over 1,000 for her career, they helped Hoosac Valley extend its season into the Final Four.

McGrath led the league with 64 made 3-point attempts and was fourth in points per game (17.28). Witek averaged 10 points per game and really picked up the pace once the Western Mass. tournament began, scoring at least 11 points in all but one of Hoosac’s playoff games.

“It’s certainly a positive experience because players tend to change a little bit and it is nice to see how the team reacts going into intense games, especially moving on to the state tournament,” Hoosac coach Holly McGovern said of the reformed sectional tournament.

Wahconah and Taconic joined the Hurricanes as teams to bring home some fresh Western Mass. hardware.

The Wahconah girls basketball team got a double-double from Olivia Gamberoni to beat the Tigers 56-33.

Warriors Emma Belcher, Oliva Mason and Olivia Gamberoni led the charge to a Class B. title with a combined 44 points against South Hadley. Wahconah only featured two seniors in Eva Eberwein and Ella Quinto, which meant that there is plenty to feel good about headed into next season.

Gamberoni was sixth in the County at 15.78 points per game and Wahconah featured four of the area’s top 3-point shooters. Wigington was second (46), Belcher was fifth (36), Eberwein was seventh (34) and Gamberoni was eighth (33).

The newly-named Thunder earned their newly-named Western Mass. Class C title with 1,000 point scorer Ahliya Phillips in the spotlight. The speedy slasher scored at least 20 points in 11 of her 24 games, which featured 27-point performances against both Drury and Holyoke.

A big second half helped Ahliya Phillips join the 1,000-point scorers list at Taconic, as well as help her team into the Western Mass. Finals.

Phillips, who notched her 1,000th point against Drury on Feb. 23 and was fifth in the county at 17 points per game, along with senior center Faith Cross, have been pillars for Taconic to build on in each of the last four seasons. Alex Hudson and Maddie Winn benefited from Phillips’ strength of attracting defenders, making opponents pay with a combined 61 3-pointers on the year. Hudson was sixth with 35 and Winn knocked down 26, despite each of the two missing time throughout the year.

Jamie Duquette used a promising Berkshire County 2020 season as a springboard, averaging 17.53 points per game for Pittsfield, which was the third-best mark in the County. Jamie was a machine with nine 20-point performances and Randi Duquette joined the top-scorers list at 11.18 points per game.

PITTSFIELD — Randi Duquette had 10 points at halftime, and there was no adjustment that was …

A streaky season for the Generals featured two, three-game winning streaks and a Jan. 26 win over Hoosac. The time to buy stock in Pittsfield is right about now. The Generals will return all but one player next season with sophomore Charlotte Goodnow and freshmen Dezerea Powell and Jasmine Small getting comfortable at the varsity level.

The Blue Devils knew what they were getting with Kayla McGrath, who was seventh in points per game (15) and tied for eighth in 3-point shots (33). With that in mind, nobody elevated their game in the postseason quite like Alyssa Russell. The sharpshooter knocked down 10 3-pointers on Drury’s three-game state tournament run, which ended in the Elite Eight.

Kayla McGrath and Alyssa Russell scored 15 points apiece, as the No. 7 Blue Devils eliminated No. 23 Hull from the MIAA Division V State Tournament.

She closed the year with 44 made 3-point shots and was second on the team in scoring behind McGrath and her five 20-point performances.

Emma Goewey and Charlotte Coody held the Eagles and Mounties together, respectively, for most of the year. Goewey ended her senior year averaging 13 ppg as Mount Everett handled Old Colony before falling to Hoosac in the D-V tournament.

Coody, only a freshman, took advantage of every opportunity she could on a young Greylock squad as a walking double-double. A beast on the boards, Coody was 12th in points per game (10.68).

The Monument Mountain girls, which saw Natalie Lewis score 10.28 ppg at point guard, while Evi Higgins began cooking beyond the arc with 30 made 3-point shots on the year, were certainly an electric bunch.

The Spartans featured an experienced roster where any player could take control of the game. Higgins, who connected from deep in 10 of the final 11 games, scored a season-high 26 points for Monument Mountain with four 3-point shots on a Feb. 14 win over Lee. After four losing seasons, Monument won 12 games under first-year coach John Perreault.

Lenox watched as the dynamic duo of Tabor Paul and Mia Giardina combine for at least 20 points in three games, all wins for the Millionaires.

That’s piles and piles of points and games after a strict Berkshire County season in 2020. I certainly missed some things and for that, I apologize. But, at the same time, the shot clock is up and it’s time to break out the spring gear.