WILLIAMSTOWN — Following another long layoff, the Hoosac Valley boys once again showed just how badly they wanted to get back on a court Monday night at Mount Greylock.

The Hurricanes raced out to a quick double-digit lead and put the Mounties on their heels in a hurry before winning 67-42 on a snowy Martin Luther King Jr. Day. The loss snapped a six-game win streak by Greylock, and on the flip side Monday was Hoosac’s first game in 11 days. 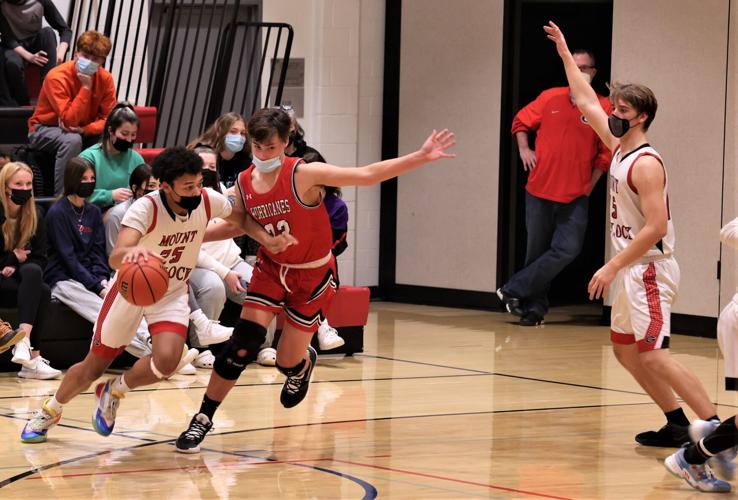 Hoosac Valley's Frank Field, pictured in this file photo, scored 18 points for the Hurricanes on Wednesday. 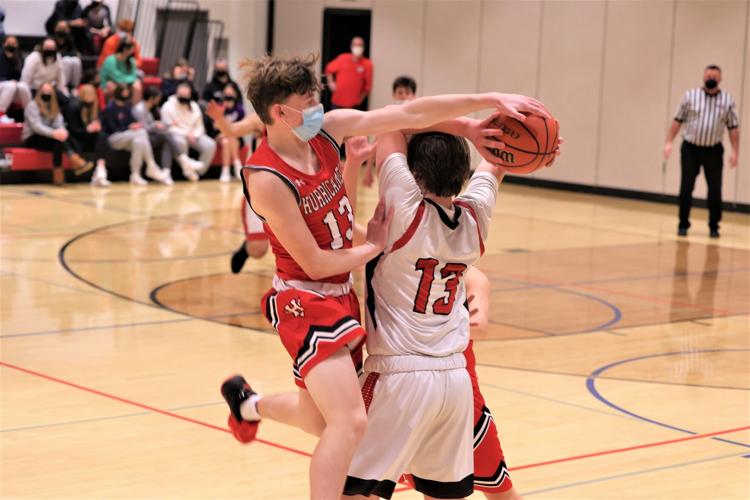 Hoosac Valley's Joey McGovern gets his hand on the ball defensively, as the Hurricanes defense traps Mount Greylock's Jackson Shelsy near halfcourt on Monday night in Williamstown. 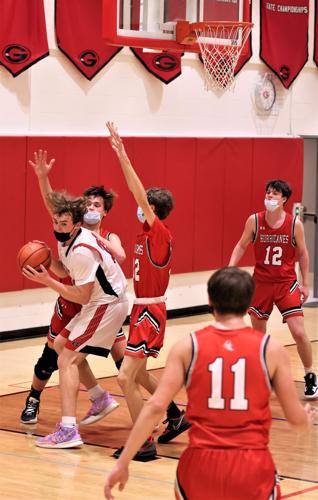 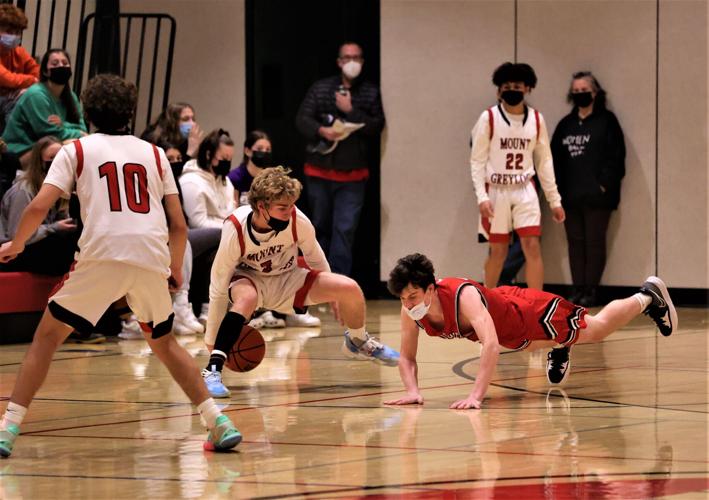 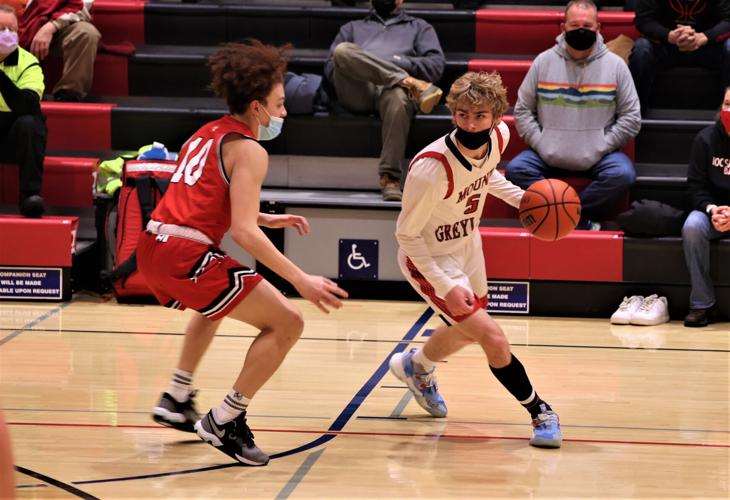 On Monday night in Williamstown, the Hurricanes beat Mount Greylock 67-42.

TO view a full gallery or purchase photos from this game, click here.

Hoosac Valley's Frank Field, pictured in this file photo, scored 18 points for the Hurricanes on Wednesday.

Hoosac Valley's Joey McGovern gets his hand on the ball defensively, as the Hurricanes defense traps Mount Greylock's Jackson Shelsy near halfcourt on Monday night in Williamstown.

“We’ve had six, seven kids at practice. We haven’t been able to do much,” said Hoosac coach Bill Robinson. “We went through a play or two for the 3-2 zone, and we put a press in.”

Mount Greylock coach Bob Thistle called three timeouts in the first quarter, doing everything in his power to stop the rising tide of Hoosac Valley’s transition game. Each time, though the waves only got bigger and more frequent. Greylock turned the ball over 26 times, with the bulk of those being forced by Hoosac’s pressuring defense which worked to constantly trap the Mounties at halfcourt and cut into the passing lanes.

“This was a good litmus test for us. We won some games, but we’re not good enough now to make the run that we want to in the tournament,” said Thistle. “You want to play a team like Hoosac. They’re in a different class, but they’re well-coached and hard-nosed. If we take care of the ball, we can compete with anybody. But if we don’t it’s going to be a long night, and that’s what it was tonight.”

The Hurricanes (6-1) have now won four straight themselves, and this one was wire-to-wire. Joey McGovern (11 points) splashed home the first of his three 3-pointers to open the scoring. Seamus Barnes answered with a hook shot, before the Hurricanes blitzed to a 15-2 lead and never really looked back.

Chase Doyle led the Mounties (6-3) with 20 points, and he scored on a give-and-go with Barnes in the middle of the second to make it 24-15. A set of Greylock turnovers followed, the second of which led to Carson Meczywor finding Frank Field in transition for a layup. Field was fouled and completed the three-point play to make it 29-15.

That was pretty much the theme of the night, as Meczywor finished with a game-high 26 points and Field had 19. Senior Lucas Waterman was inserted into the starting lineup as a focal point of the press and caused havoc all night.

“We put some things in, and Lucas started tonight because Shaun [Kastner] had been out,” said Robinson. “He’s an important sixth man off our bench because he gives us a lot of energy. You saw the energy he put out on the floor, so you like to have that kid coming off the bench. He’s a senior, but he showed he wants to start. It’s a good problem to have.”

Meczywor stole a pass on the next possession and got two foul shots at the other end. Field followed with another bucket in transition and two more free throws and the lead ballooned to 21, before Adam Sandifer scored on a putback off a missed foul shot to calm the run. Still, Hoosac led 40-18 at halftime. Field had 12 of his points in the second quarter.

The start was similar to one earlier in the year in which Hoosac led Easthampton 50-24 at halftime, before the Eagles closed to within six in the second half.

“We just learned we can’t let off the gas no matter what,” said Field of those lessons. “ We came out in the first half tonight with pretty good intensity. Second half we maybe lost it a little bit but were able to get it back and keep it going.”

The third quarter belonged solely to Meczywor, as the senior guard had all 14 of the Hurricanes’ points in the frame, out-scoring Greylock by two on his own.

Max McAlister hit an off-balanced triple to open things for the Mounties, before Meczywor started his procession of transition layups off everything from steals, to misses, to even made Greylock baskets. The lead hit its apex at 46-21 off a Meczywor swipe and score with 5:30 left in the third.

Hoosac Valley still making things real tough on Greylock offense. Another steal here and Meczywor finds Field for the and-1 in transition. He converts and it's 31-15, mid Q2. pic.twitter.com/yNcoq8PNL6

“Hoosac did a really good job. The goal of any press is to try and turn the ball over, but really I think the primary goal is to speed you up,” said Thistle. “Can you get it across? We did sometimes, but not enough, and when we never set our stuff up. We thought we had open looks, rushed shots, and that’s a credit to Hoosac.”

Greylock opened the fourth on a 6-1 run to get within 55-38, but McGovern came away with a pair of steals and Hoosac closed the game out on a 12-2 run of its own.

“It’s a group that wants to work and wants to compete, and I’m sure we’ll see that tomorrow,” said Thistle.