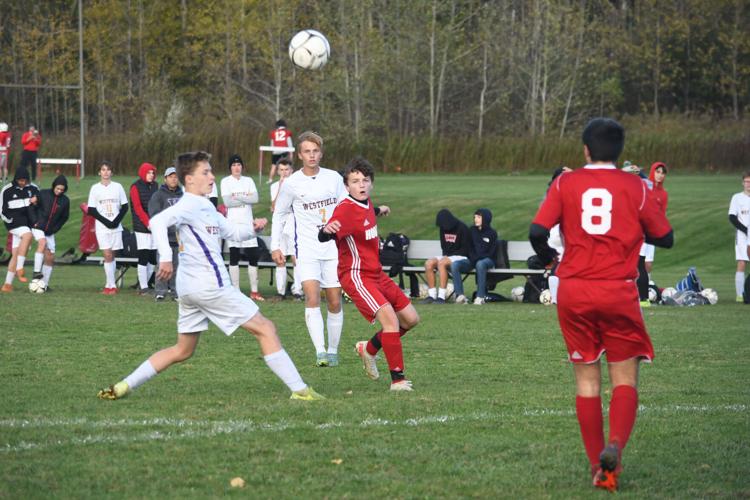 From left, Westfield Tech's Logan Gendron, Adam Strycharz and Hoosac's Evan Richardson keep their eyes on the ball during a soccer match on Tuesday in Cheshire. 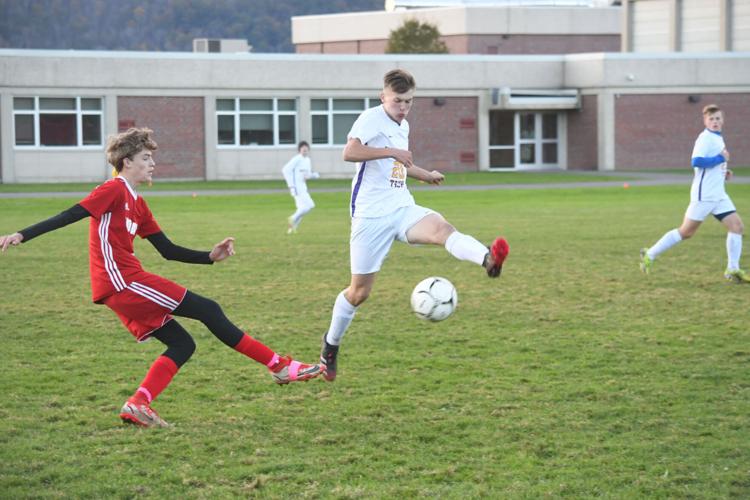 Westfield Tech's Nick Povar tries to block a kick from Hoosac's Nick Walsh during a soccer match on Tuesday in Cheshire. 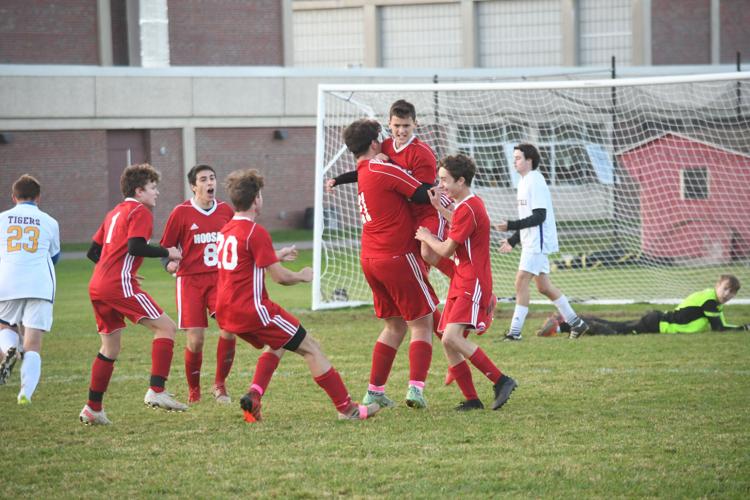 Hoosac celebrates a goal during a soccer match with Westfield Tech on Tuesday in Cheshire.

CHESHIRE — A firm yank by Ian Godfrey, and the Hurricanes had the Tigers losing ground in the second half of Tuesday’s tug-of-war.

Westfield Tech, though, used the final 15 minutes to recompose, scoring twice and escaping the pitch with a 2-1 win over Hoosac Valley.

“Today featured two teams that look tournament ready and it was a fun one,” Hoosac Valley coach Pat Mahoney said, “even though I wish the results would’ve been a bit different.”

Mahoney added that soccer is a game of moments, and Hoosac Valley keeper Luke Waterman erased any consequence that could’ve been in the first half of action.

Waterman’s first save came in the third minute, a lunging deflection with a crowd pushing the left side of the net. One minute later, a corner kick turned header was destined for the goal. Instead, it was another of Waterman’s seven saves in the first half.

The Hurricanes gained momentum late in the first half as Godfrey pushed the tempo and found Francesco Zanolo barreling toward the goal. Westfield Tech’s Liviu Mocanu went low, forcing Zanolo high and creating an opportunity to capture the ball.

The misfire ended the first half but Hoosac kept the engine warm through the break. Godfrey did his damage and officially got on the stat sheet in the 47th minute. Roughly a minute after a Hoosac corner kick, the ball roamed free inside the box following a lunging save from Mocanu. Instincts took over for Godfrey, charging through a frazzled defense and punching it in for the match’s first goal.

The Hurricanes (10-3-2) controlled the ball for most of the second half, but the final 15 belonged to the Tigers. David Bulatov and Adam Strycharz came up big and changed the game’s trajectory in favor of the road team.

“Up until the last 15 minutes, everything was perfect,” Hoosac midfielder Isaac Herrmann said. “We just lost our concentration a bit toward the end.”

Strycharz created a one-time opportunity and Bulatov punched it in to knot the game at one in the 65th minute. Bulatov returned the favor in the 75th minute with a header to Strycharz for the game-winning goal.

“Westfield Tech was better in those critical moments and there are always just a few in every match,” Mahoney said.

The Tigers (12-0-3) are yet to register a loss on the year and defeated the Hurricanes on both ends of the home-and-home series. However, comparing the 2-0 loss on Sept. 24 and Tuesday is like comparing apples and oranges to Mahoney.

“I think both teams have gotten better, which made for a really interesting second round,” Mahoney said. “For us, we have a different identity [from then] where we can build up but also be direct when necessary.

“It didn’t work out today, but I do think the play was better than last time.”

Westfield Tech was the fifth-best team in Division V in the Oct. 17 MIAA Power Rankings. The Hurricanes placed seventh, two spots below the Tigers.

Hoosac Valley entered Tuesday’s match on a four-game winning streak and with the regular season winding down, the Hurricanes are well aware that the bitter weather means tournament time is quickly approaching.

“We love the cold,” Herrmann said. “We love playing in it and last season was our first chance to get some experience in the postseason. For us seniors, this is the last chance and we want to go all the way.”

Hoosac Valley got a taste of playoff success with the Fall II Berkshire South championship over Mount Everett. With high aspirations moving forward, Mahoney sees Tuesday’s performance as a molehill, not necessarily a mountain.

“I don’t have to work hard [for us to stay on track] because our next match is against McCann tech under the lights at Renfrew,” Mahoney said. “They will be ready and I think they’re already thinking about it.”

The Hurricanes and Hornets tied 1-1 back on Sept. 10 and the rematch is slated for 7 p.m. on Thursday under the lights of Renfrew Park.