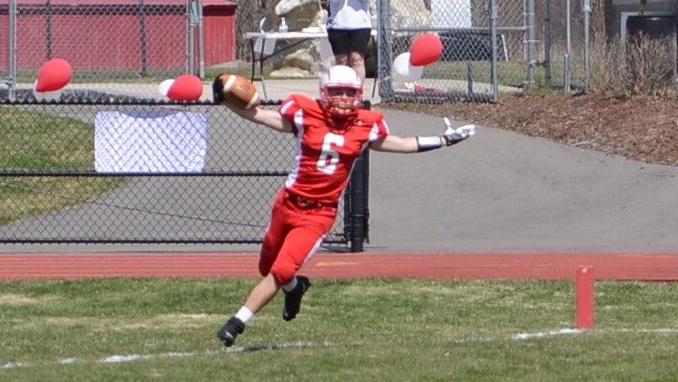 Hoosac’s Griffin Mucci celebrates a pick-six against Mount Greylock in Cheshire on Saturday. 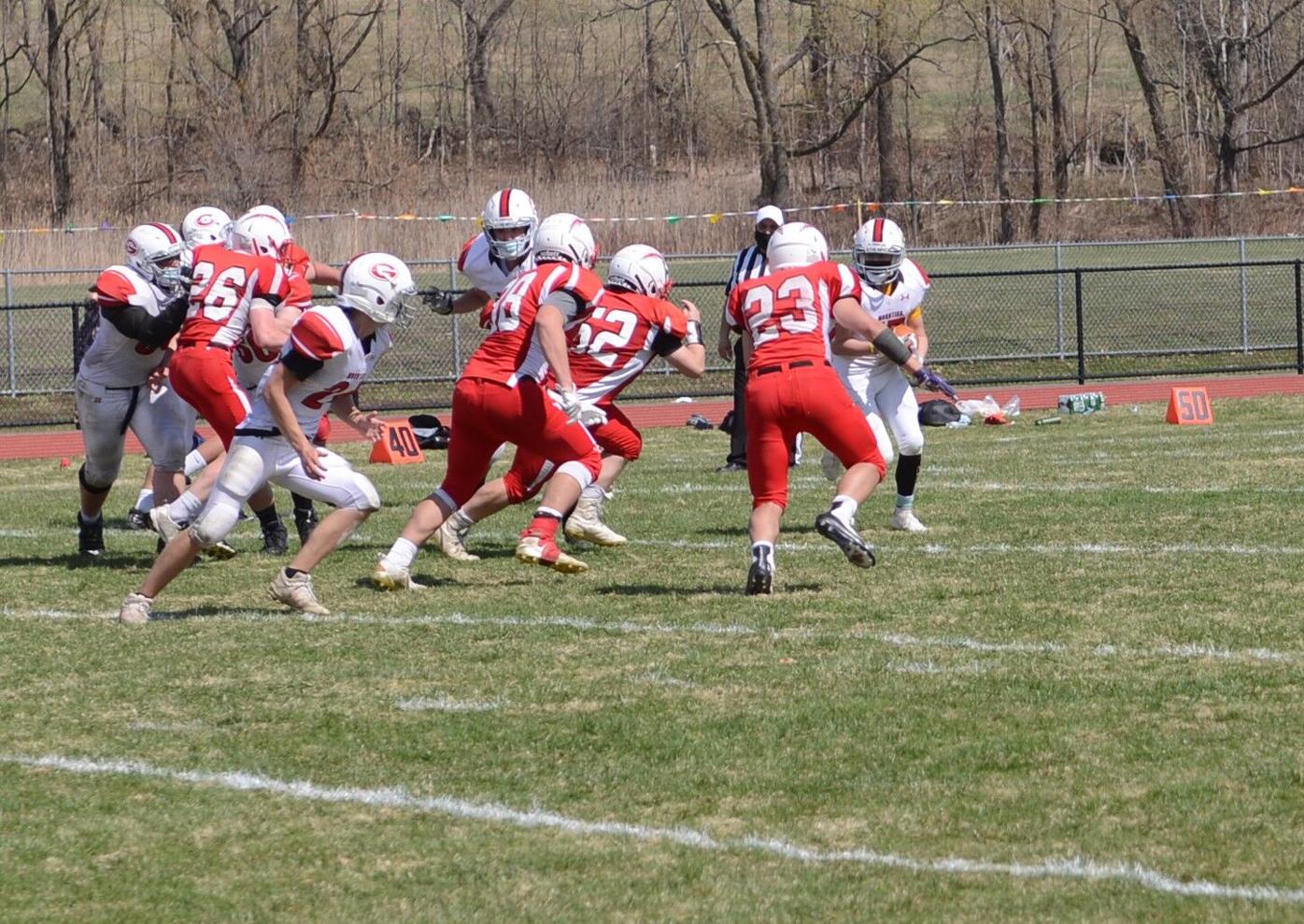 A horde of Hoosac defenders rush a Mount Greylock ball carrier at Senior Day for the Hurricanes on Saturday. 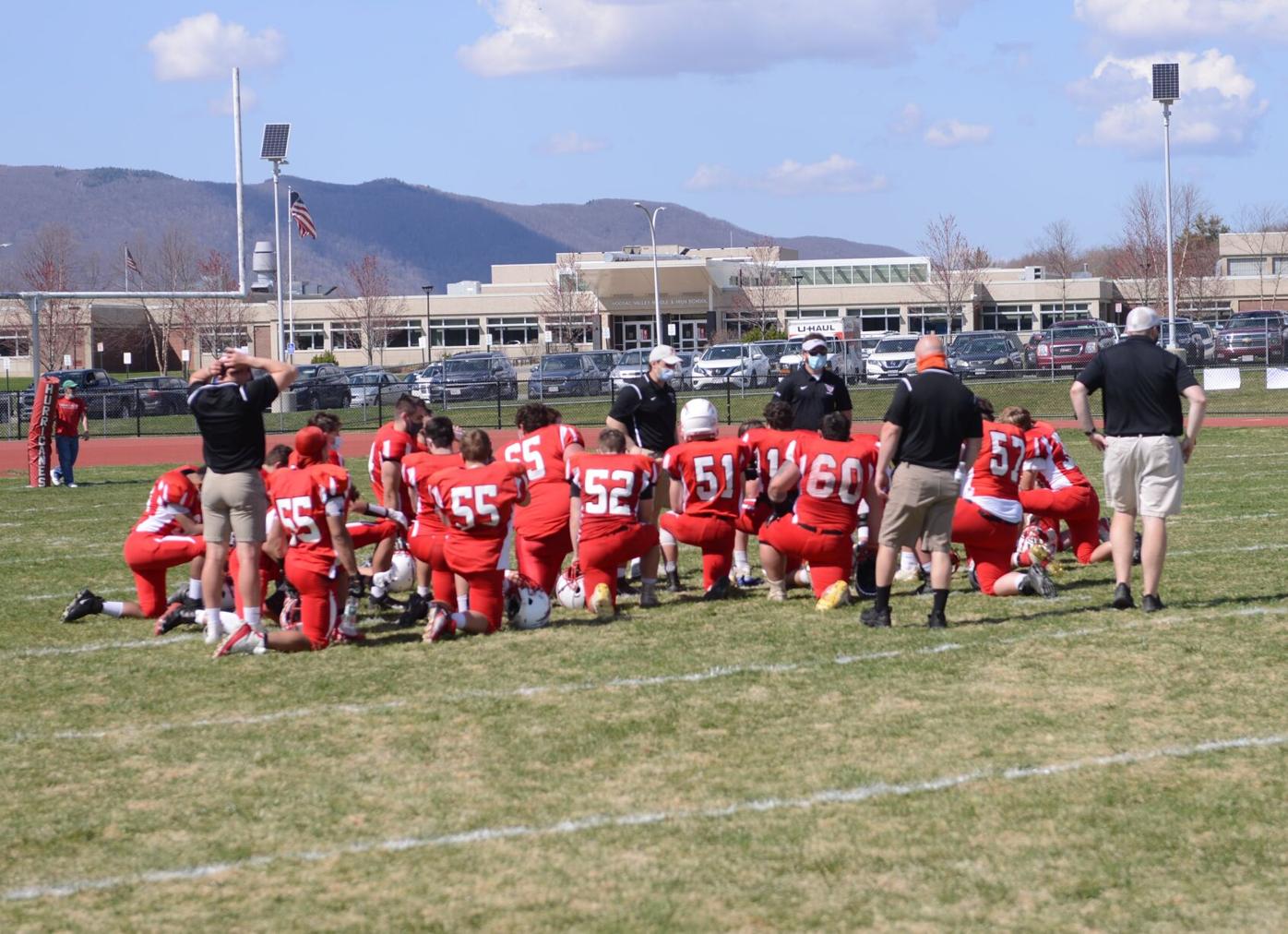 Hoosac’s Griffin Mucci celebrates a pick-six against Mount Greylock in Cheshire on Saturday.

A horde of Hoosac defenders rush a Mount Greylock ball carrier at Senior Day for the Hurricanes on Saturday.

CHESHIRE — Hoosac Valley football celebrated its senior class on Saturday afternoon, but it was an eighth grader that stole the show.

Griffin Mucci had the hot hand with 115 yards and three touchdowns as Senior Day came to a close with the Hurricanes winning 44-8 over visiting Mount Greylock.

“To be out here and make it this far [during a pandemic] is something special,” Hoosac senior Aiden Koczela said following the win. “This field has been my home and we got to defend it.”

Hoosac Valley (1-1) needed just three plays to reach the end zone on the opening drive. Shaun Kastner Jr. carried the ball on a sweep to the right, breaking free from Mountie (0-1) defenders and taking the ball down to the one-yard line. Quarterback Carson Meczywor broke the plane on the next play and a two-point try by Logan Davis had the Hurricanes rolling 8-0.

“Honestly, sports in general and I don’t care what sport it is, if you can build a kid’s confidence and you can build it at a young age and keep that kid working hard, that is everything and anything you want to do,” Hoosac coach Mike Bostwick said of Mucci’s big day.

Mucci carried the rock just three times on the afternoon, but broke off a 54-yard touchdown in the second quarter and a 56-yard scamper for six in the third quarter.

“Being a senior, to know that we have that depth behind us and we can rely on some of the younger guys to step up and make a play, it feels great,” Koczela said.

After coming up just short on the first try, Hoosac called Kastner Jr.’s number again on the same sweep to the right and this time he crossed the goal line on a 31-yard run. Meczywor connected with Caleb Harrington on the two-point try, inflating Hoosac’s lead to 22-0 at the 5:14 mark of the first quarter.

Aaron Bush made the most of limited rushing attempts, carrying the rock three times for 66 yards and a touchdown. The Hurricanes attempted just three passes on the day as the ground game finished with 289 yards and five touchdowns on 15 attempts.

Saturday marked the first time the Mounties hit the field in over two years after playing in a co-op with Drury in 2019. Despite the loss, there were some bright spots for Mount Greylock under coach Shawn Flaherty in his first year back on the Mountie sidelines.

McDonough’s first three passes fell incomplete, but the freshman hit his stride early in the second half. Fellow freshman Dom Carnevale was his go-to target, hauling in four passes for 48 yards and a touchdown. The duo connected on back-to-back plays in the third quarter with the second landing Carnevale in the end zone. McDonough ran the two-point try in to get eight points on the board for Greylock.

In a year where things can change in a blink of an eye, Saturday’s biggest win was honoring Koczela, Aiden Astorino, Davion Cote and Logan Leja, Hoosac’s four seniors.

“It’s just crazy how much life has changed from last year to this year,” Koczela said of his thoughts during the pre-game celebrations. “I knew the second we had the opportunity to [play] we all were going to take it.

“To be out here is great, especially on senior day.”

Saturday was technically Bostwick’s first win as head coach of the Hurricanes, but as someone who has been with the program since 2009, he kept his seniors in the spotlight following the win.

“The coolest thing is to watch the seniors grow and mature,” Bostwick said. “You are on these guys all the time to make good choices, do the right thing and try to develop them as better leaders and people.

“Then you see them as seniors and you realize that the work and consistency, we’re a small part of that and obviously their parents play a bigger role, but to see it come to fruition today with that group... it’s awesome to see.”

Hoosac Valley was featured in Berkshire County’s lone game last week and getting in the win column is the first step toward a Berkshire County title for the Fall II season.

“We definitely need to fine-tune some things,” Koczela said, “but we’ll keep the temp up and come out of the gates swinging.”

Caleb Harrington wrestles for an interception.

Worth the wait: Monument Mountain football gearing up for opening night against Mount Greylock

Week 3 of the Berkshire County Fall II football season could feature an unexpected, but familiar cameo.

The third week of the Fall II football season suffered an initial casualty Friday night, with a matchup between Monument Mountain and Mount Gr…

As April begins to wind down the same is true for the Fall II football campaign. The spring season is eerily similar to “normal” fall sports a…

The Hoosac Valley football team is determined to build off a strong spring season and return to the playoffs in 2021.