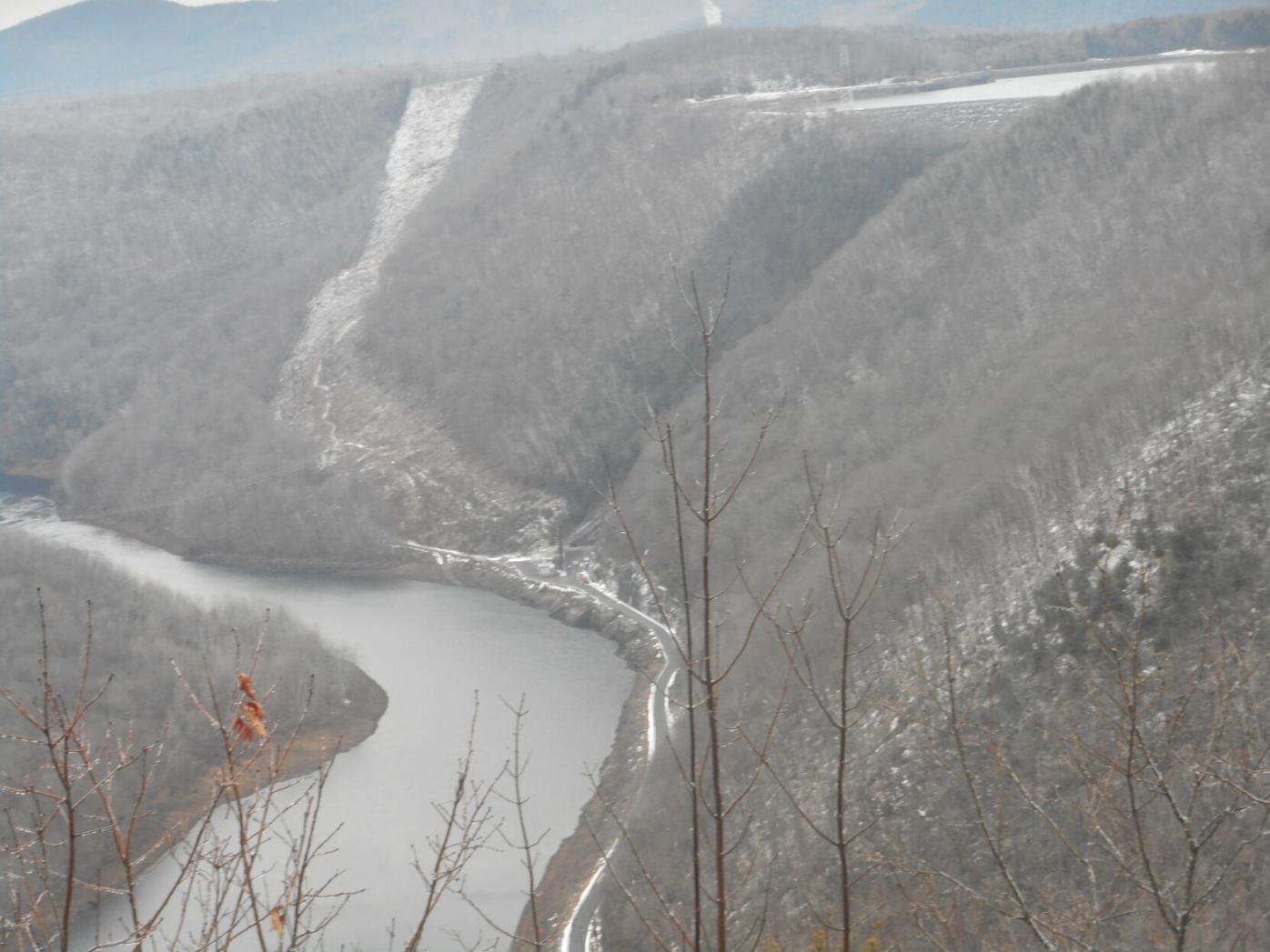 From an icy Raycroft Lookout, the view extends beyond the upper Bear Swamp reservoir to the hills beyond. 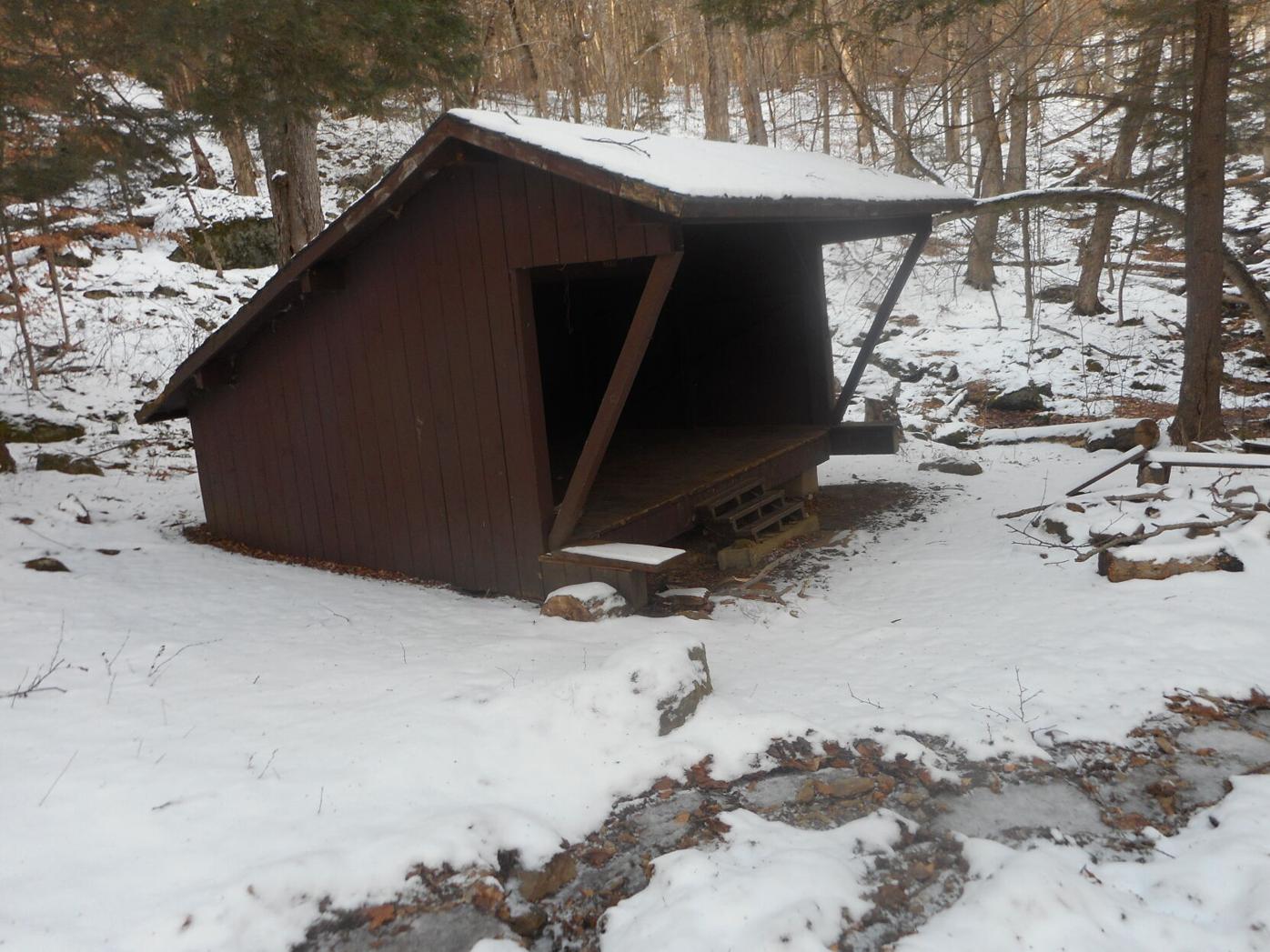 The Spruce Shelter is the first of two along the Smith Hollow Trail to Raycroft Road. 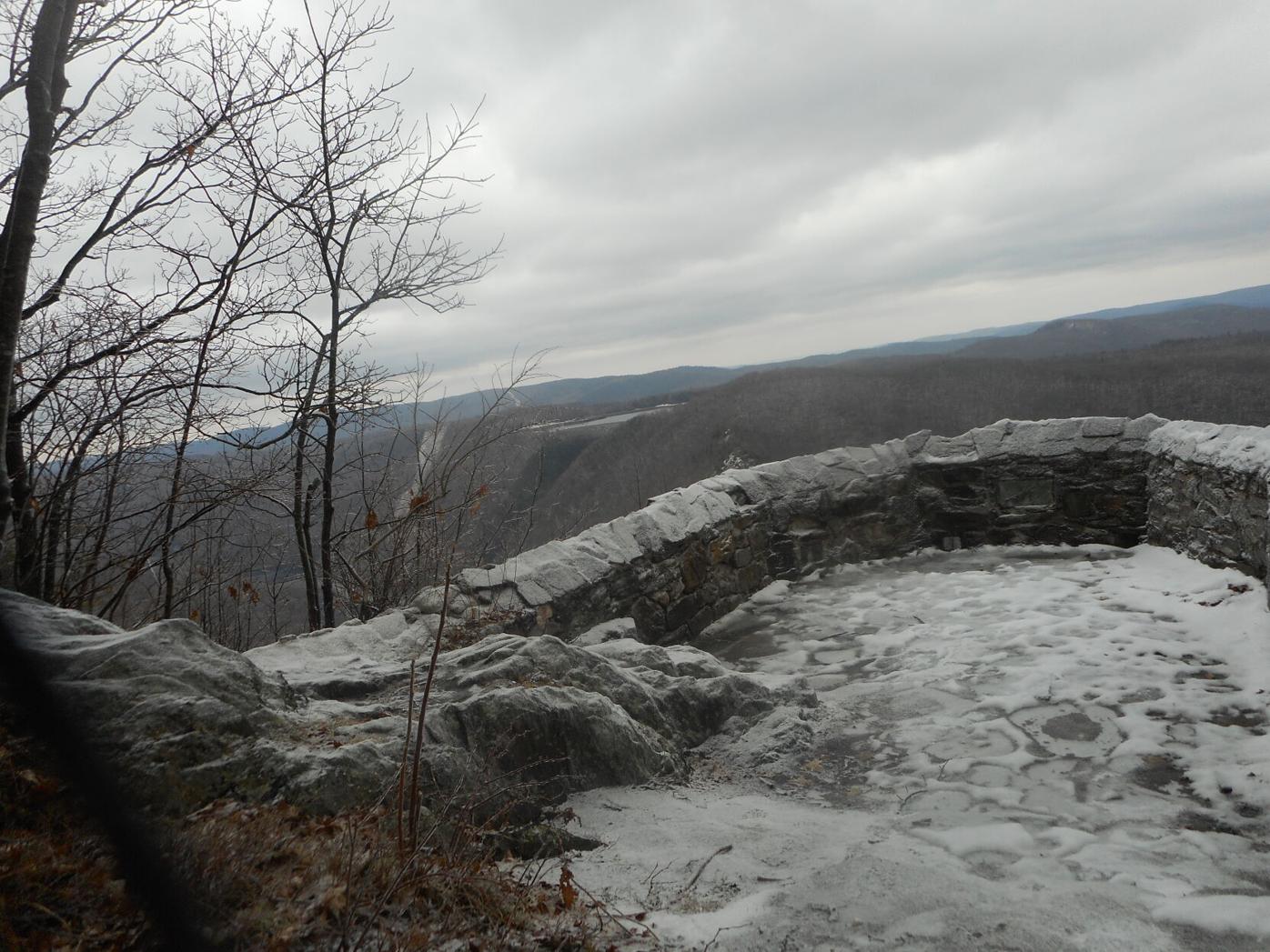 From an icy Raycroft Lookout, the view extends beyond the upper Bear Swamp reservoir to the hills beyond.

The views from Raycroft Lookout are some of the most dramatic inland views in the Commonwealth.

The road in, such as it is, is not plowed, but you can take an adventurous 5-mile roundtrip hike in from Dunbar Brook, Florida. Just getting there you will see gorgeous mountain streams and remote backcountry forest. From the lookout, you will take in the scenic Deerfield Valley, including both reservoirs of Bear Swamp Generating Station and the mountains of Vermont and New Hampshire.

The drama comes from topography. This is an area of modest, but steep hills, incised by the steeply falling rivers. Some of the oldest and tallest trees in Massachusetts have been well-watered — and protected from logging by the steep slopes. The walk is in 4,321-acre Monroe State Forest, former farmland — for farmers who adapted to thin soils and large boulders.

Take Route 2 east out of North Adams. Just past Whitcomb Summit take the next left. Looking down hill, straight ahead on Monroe Road would take you near the lookout — but not in the winter. (Although Monroe Road provides access for snowmobiles, as the cover deepens.) Bear right, staying on Whitcomb Summit Road as it drops steeply to a T at River Road. The river is the Deerfield. In the summer, water sports enthusiasts throng to this area.

Turn left. You pass the eastern end of the Hoosac Tunnel and then Brookfield Renewables’ Bear Swamp Visitors Center, right. Worth a visit, if open. About 4.5 miles from Route 2, Great River Hydro, which owns the dams on the Deerfield, maintains a picnic area on the right; across from it is your trailhead. Micro-spikes recommended.

Start hiking up the hill on a Jeep trail rather than taking the stairs, which lead to the dam. The trail, blazed blue, detaches itself from the Jeep trail, following upstream and heading gradually down through the hemlock forest. Then it follows close to the river, except when forced to detour to higher ground. When you see the bridge, after about 15 minutes, you turn left, starting up the side of the valley.

At first the trail continues upstream. Then it turns 180 degrees, following a long diagonal traverse up, crossing numerous brooks and ducking under some downed trees. Just as the steepness of the slope eases, the trail turns upstream again until it passes the Spruce Shelter. You have gone near some of the oldest and tallest trees in the Commonwealth.

Something of a road was created to build and maintain the shelter. Follow by its icy puddles until, approximately 1.5 miles from parking, it meets the similarly-rutted Raycroft Extension Road at a Y. Bear right, with still an occasional blue blaze to guide you.

Ignore a road branching off to the right, but follow left on the maintenance road to the Smith Hollow Shelter. (If you pass under wires, you’ve gone too far on Raycroft Extension.) After passing the shelter, wires cross above you and the trail turns right, beginning a long climb. Note for the return trip that you turn left onto an old road before turning left onto Raycroft Road. Raycroft is in the best shape of the woods roads you’ve encountered. You have a half mile to the lookout. You pass under those same wires just as you arrive at a parking area. The Spruce Hill Trail, well-signed, departs right. If you decided to take it, you could complete a 10-mile hike, returning along Dunbar Brook and crossing the bridge where you turned before.

Raycroft Road becomes Monroe Road, but you bear off it on a well-marked road left. It ends in an open area crossed by a different set of wires, exposed to the wind, with fine views north and south. The route to the lookout becomes a trail. Its descent is aided by wooden stairs leading to the stone lookout, 2.5 miles from the trailhead. Raycroft is the name of the one-time property owner.

The Civilian Conservation Corps built the balcony style lookout in 1934, to enable the public to take in the remarkable view of the Deerfield Valley from 1,760 feet, or approximately 1,000 feet above the river. The Lookout was the ideal vantage point to watch the construction, from 1968-1974, as the New England Power Company built the upper reservoir. The lower reservoir was backed up behind the Fife Brook Dam. Two massive machines inside the mountain pump water from the lower to the higher during the night and release it through the pumps turned generators during the day, when electricity is more valuable. Brookfield now owns the facility.

Then, as visitation declined, vandals apparently enjoyed removing the stones and sending them crashing down the cliffs. A decade or so ago, the Massachusetts Department of Conservation and Recreation hired the Student Conservation Association, which has done a lot of trail work in the forest, to rebuild the lookout, which is in fine shape today. So are you, after a testing scramble out of the Dunbar Valley to the edge of the Deerfield Valley.

Ps. Remember to take COVID-19 precautions on all hikes: wear a mask when you are with others; stay 6 feet apart; wash your hands when you return.