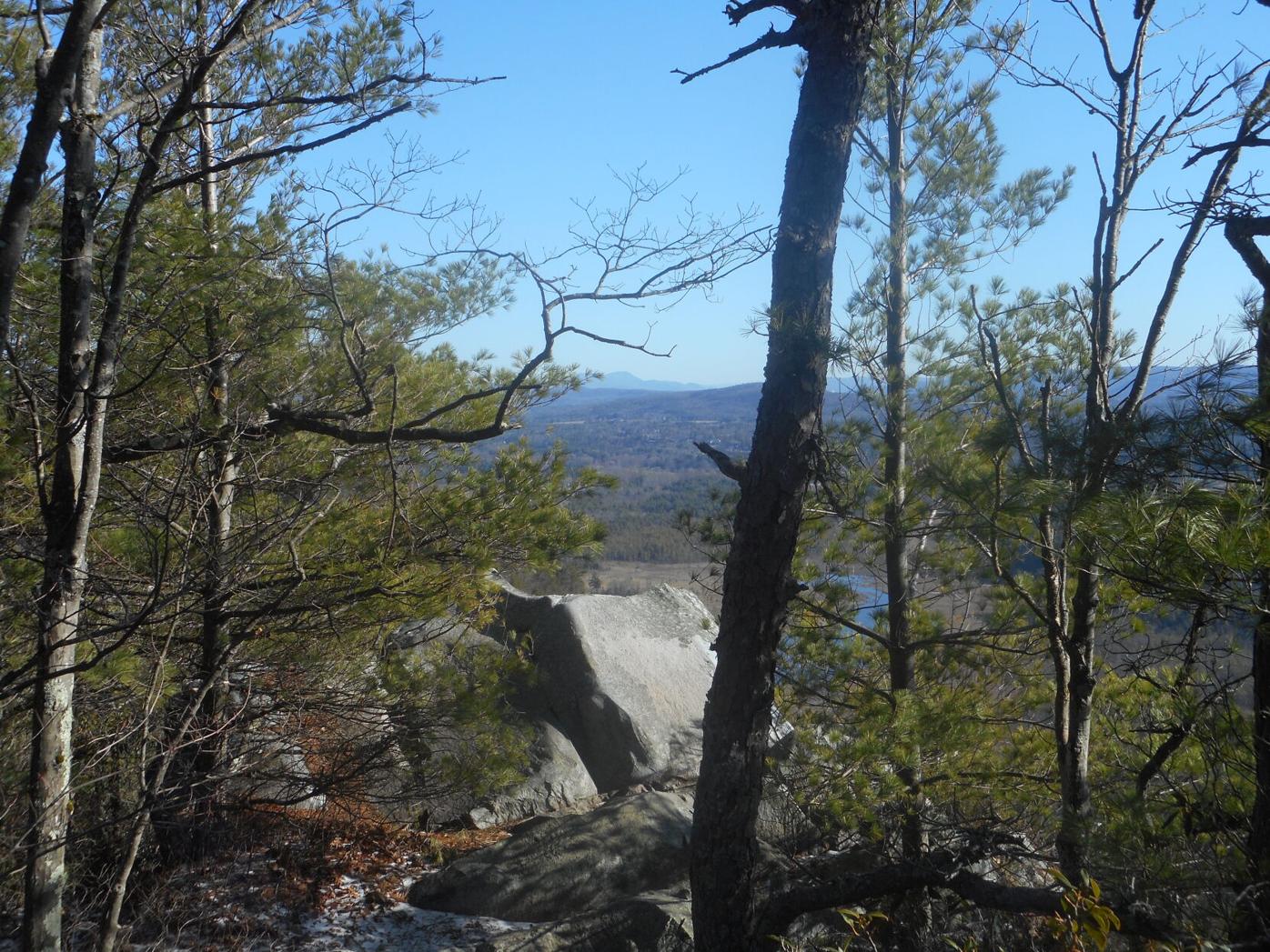 Above: Among the spacious views are those to Mount Greylock in the north. Right: The old name of the summit has been replaced with Peeskawso Peak. 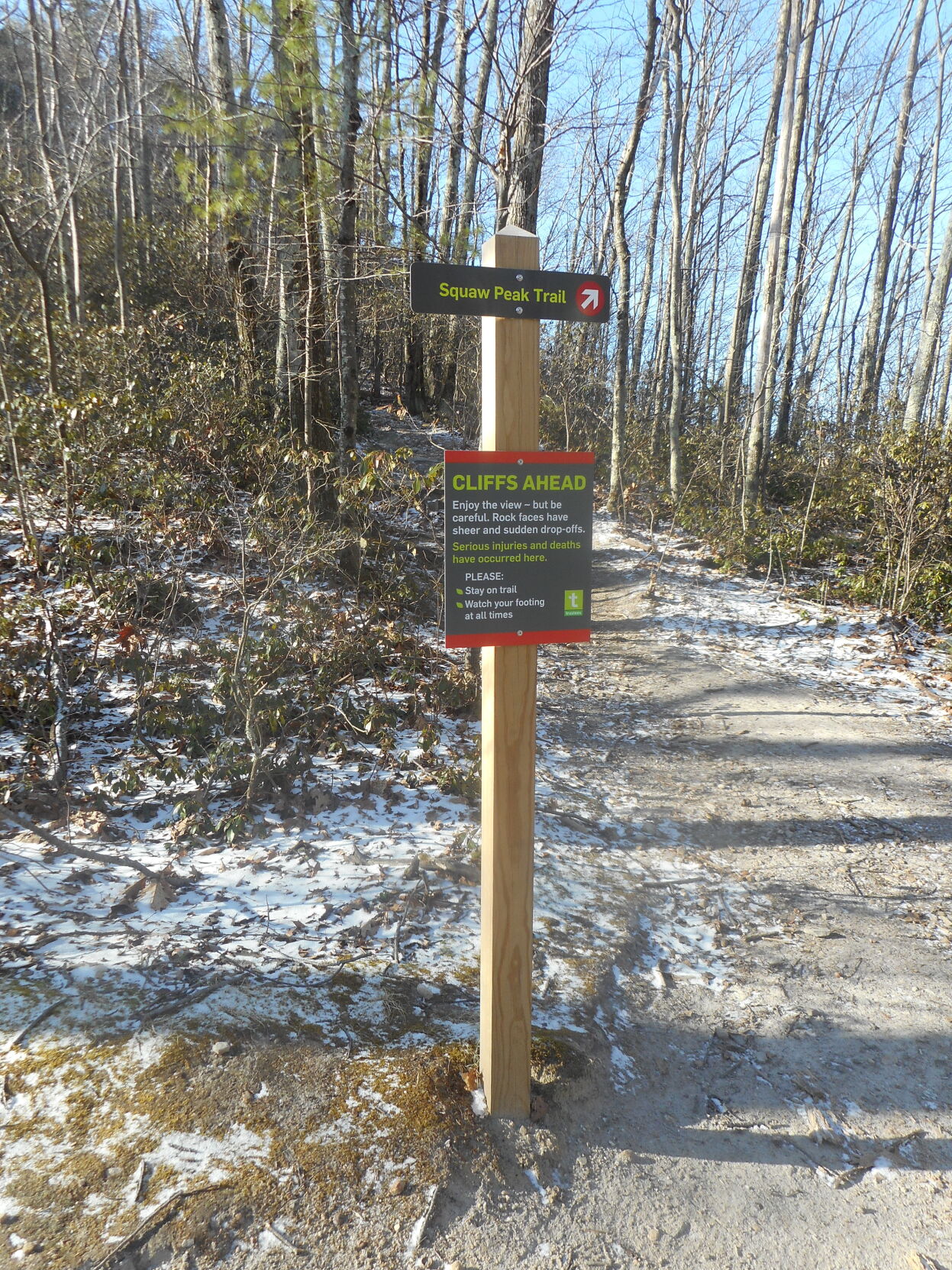 The old name of the summit has been replaced with Peeskawso Peak.

Peeskawso Peak: say it three times and the new name of the high point (1,640 feet) on Monument Mountain is yours. The Trustees of Reservations have worked with Mohican tribal offices to replace “Squaw Peak,” arguably both sexist and racist, with a word that translates to “virtuous woman.”

It’s always virtuous to take a 2 1/2-mile hike on this mountain. The new kiosk and signs will add an educational element while attempting to address old wrongs. Williams College student Trudy Fadding interned with the Mohican Heritage Center to help create a kiosk that sees the mountain through Mohican eyes.

As Heather Bruegl, Cultural Affairs Director of the Stockbridge-Munsee Band, Mohican Nation, has said, from the Anglo perspective the Aug. 5, 1850 picnic with Nathaniel Hawthorne and Herman Melville, among others, has eclipsed the indigenous view of the mountain, which is based on “thousands of years, not just one day.” More on that when we reach the summit.

The principle always is, climb the steep, descend the more gradual, as easier on knees and back. So, after parking at the official entrance to the reservation, west off Route 7, north of Great Barrington and just south of that town’s three schools, study the kiosk and set out north on the Hickey Trail (blazed yellow). The beginning is gradual, beneath large hemlocks and oaks, past the trail entering from an additional parking spot.

Your trail, broad and well-marked, begins to rise more steeply beside rocky scree and then turns west as it reaches a ravine, crossing a brook and then back again. Where the Mohican Monument Trail (new name for Indian Monument Trail) enters right, continue straight on the Peeskawso Peak Trail, blazed red. The stone commemorates the 1899 date of The Trustees’ acquisition of the first parcel of the reservation. This steep section requires scrambling over chunks of rock and cliffs. A sign, put up after a woman fell near the summit, serves as a warning, especially for pets and small children.

After an up-and-down-scramble through stunted trees you climb to the high point, a rounded rock, with all the views you could ask for, including the Housatonic Valley and the sentinel of the north, Mount Greylock. Although the picnic party ducked into a cave for shelter from a passing storm, perhaps this is where they later paused to sip champagne and read William Cullen Bryant’s 1815 poem, “Monument Mountain.” 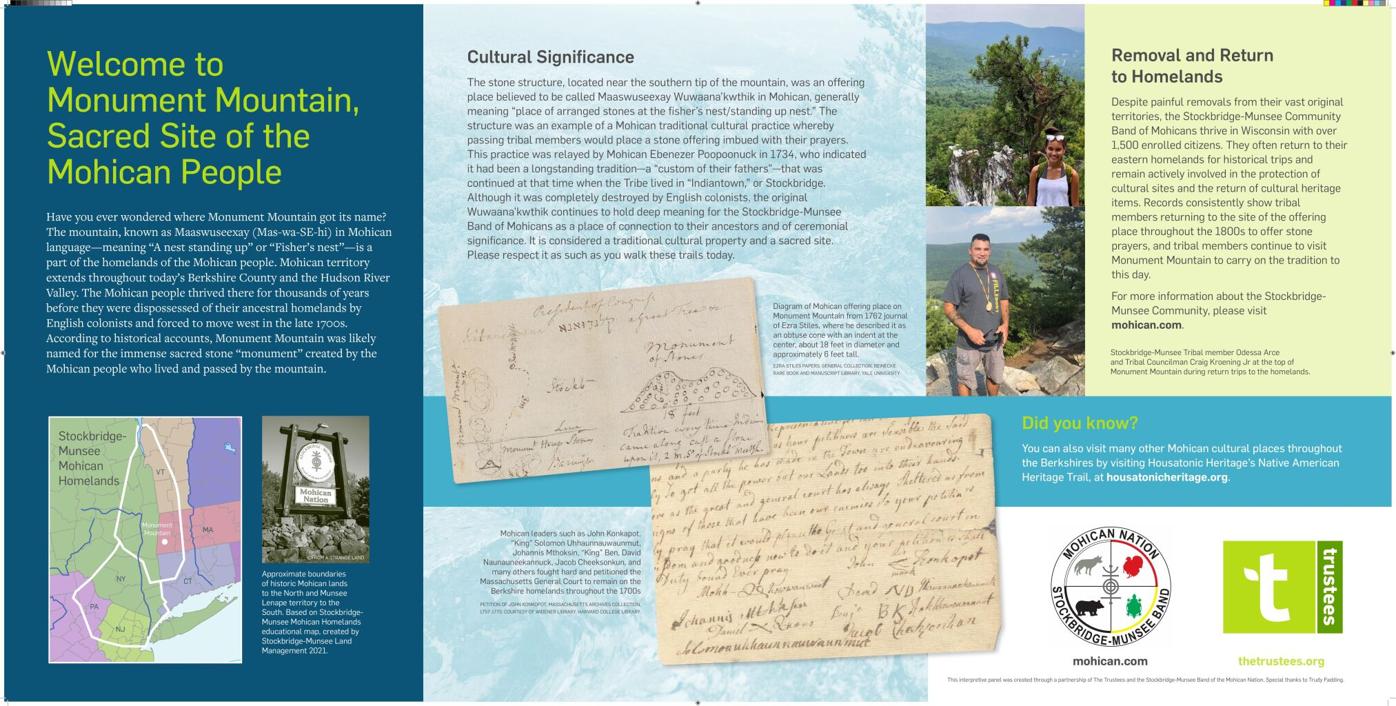 The poem tells a fanciful story of how the mountain got its name. An Indian maiden fell in love with her cousin, which the tribe deemed incestuous. She was so love-sick and depressed she leaped from the summit. The cairn for which the mountain was named was her tribe’s memorial. It seems that 19th-century Anglo males, including poets, were hung up on the deaths of Indian maidens, e.g. also Wahconah, Bash Bish.

The Mohicans honor an ancient cairn below the mountain to the south, stones paired with their prayers, once destroyed and now replaced, which is how the mountain really got its name. Rather, Bryant’s verse may have led to the name of Squaw Peak. Bryant doesn’t use that word, but whites influenced by his poem, and disrespectfully referring to all Indian women as “squaws,” may have adopted it.

In any case, the red-blazed trail continues to a left turn for a view of the Devil’s Pulpit. After viewing that remarkable tower, return to the intersection to follow straight. The trail winds gradually down until it meets the Mohican Monument Trail (the old road by which the picnic party drove much of the way to the summit). Take a left on the blue-blazed trail which continues down until it turns a corner, just before a gate, and parallels Route 7 back to the parking area.