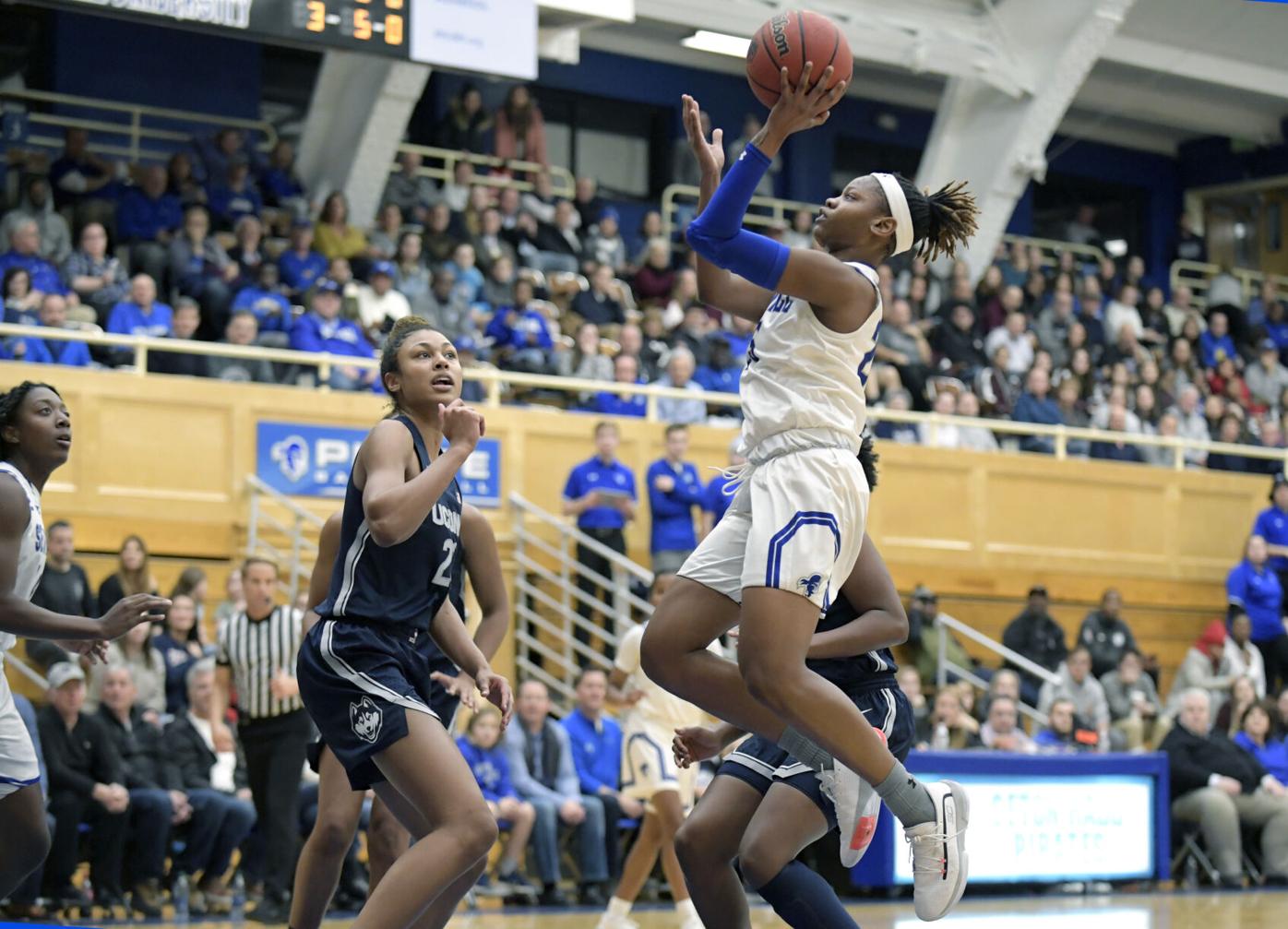 Seton Hall guard Desiree Elmore puts up a shot against the University of Connecticut last season. Elmore is Peter Cinella and the Pirates’ top returner this winter. 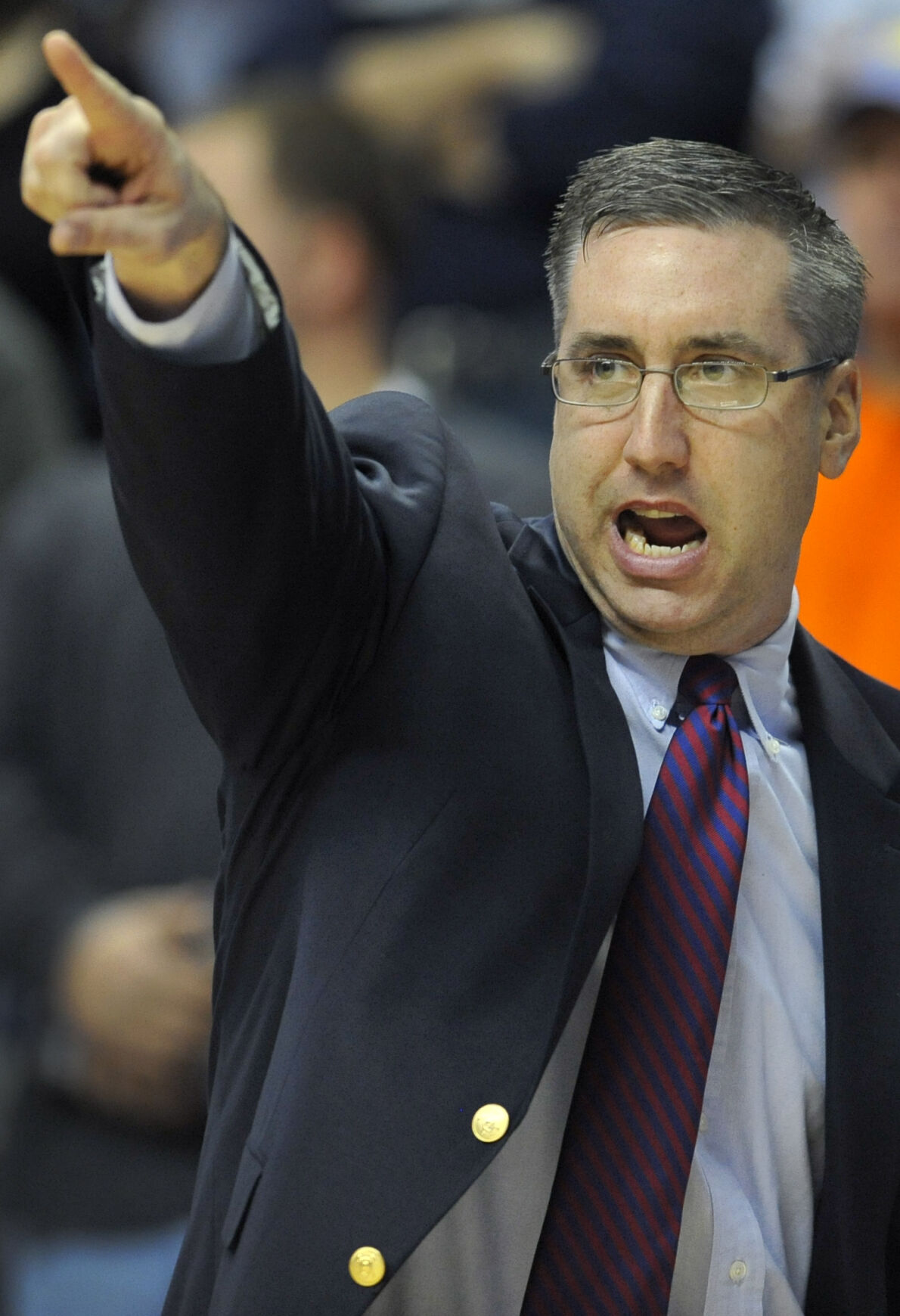 Peter Cinella may be watching women’s college basketball from a different spot on the bench, but the Seton Hall Director of Player Development says that hasn’t dampened his enthusiasm for the season that is coming.

“I was a head coach for 26 years, and now [on the Seton Hall staff], I really enjoy it,” Cinella said. “I’m trying to focus on certain things such as scouting and breaking down the video of other teams.”

The Lee native and son of Berkshire County Girls Basketball and New England Basketball Hall-of-Famer Tom Cinella, is in his second year at the Big East program. Peter Cinella was hired by Tony Bozzella after 12 seasons at Division I Fairleigh Dickinson. FDU elected not to renew Cinella’s contract.

In 26 years at FDU and at American International before that, Cinella put together a record of 417 wins and 364 losses. He was 291-130 at AIC, which included playing in the 2002 NCAA Division II Elite Eight and in the 2006 NCAA championship game.

Cinella said that the Pirates are tested for COVID-19 three times a week and they wear masks in practice.

Seton Hall was 19-12 last year and tied for third in the Big East with a 11-7 record. The Pirates were the No. 4 seed in the Big East Tournament and beat fifth-seeded Butler 83-57, before losing to top-seeded DePaul 83-80.

So far, the Big East has only posted a conference schedule, and only up until Christmas. In addition to the first two games, Cinella and the Pirates will host Marquette on Dec. 19, and travel to Georgetown on Dec. 22. There will be a regular full Big East schedule played.

“We’re trying to avoid commercial flights, so we’re going to charter” to road games, he said.

Seton Hall was picked by the conference’s coaches to finish sixth in the Big East. UConn — in its first season back with the conference since 2013 — was No. 1, followed by DePaul, Marquette, St. John’s and Creighton in the top five.

Seton Hall’s Desiree Elmore, a 5-foot-10 senior guard/forward from Hartford, Conn., is the top returning player for what is a rebuilding squad. Elmore, a transfer from Syracuse, averaged 13 points and 7 rebounds per game last year. She was a five-star player coming out of high school.

Elmore and point guard Lauren Park-Lane will be the key players for Seton Hall, which has a roster made up of nine freshmen and sophomores. There are also four juniors and only two seniors on Bozzella’s roster.

After 14 years in Division II and 12 in the lower-echelon of Division I, what did Cinella learn about college basketball at the highest levels?

“One of the advantages of being a Big East team, financially, and how we would travel ... and the different technologies we have,” he said. “Subscriptions to scouting services and the budget of a Big East basketball team. It’s so different. I thought that was such an advantage for helping the team get better. With a staff of eight coaches, we can all hyper-focus on the job we have. Whether it’s the job we have with scouting or working with different players.”

While Cinella isn’t actively coaching the Seton Hall women, he does have a huge role in coaching during practice. And while nothing gets added to his win-loss record, the former Lee Wildcat said what he does is as important as being on the court during a game.