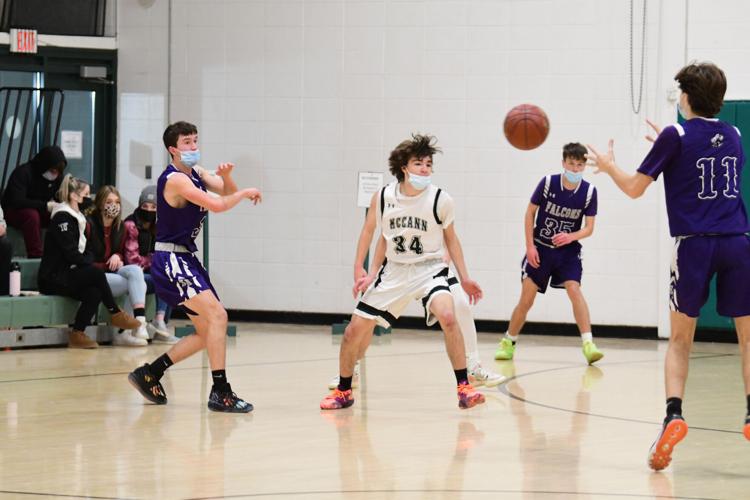 Smith Academy's Caden Gnimond passes the ball to Wyatt Jeffres past McCann's Eric Rougeau during a game in North Adams on Wednesday night. 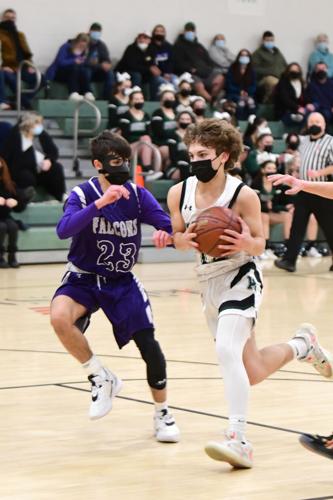 Smith Academy's Riley Intrator guards McCann's Jacob Howland as he dribbles the ball down the court during a game in North Adams on Wednesday night.

Smith Academy's Caden Gnimond passes the ball to Wyatt Jeffres past McCann's Eric Rougeau during a game in North Adams on Wednesday night.

Smith Academy's Riley Intrator guards McCann's Jacob Howland as he dribbles the ball down the court during a game in North Adams on Wednesday night.

NORTH ADAMS — The McCann Tech boys basketball team held on for a 50-44 win over Smith Academy on Wednesday, running its record to 4-2.

Cole Boisvert led McCann with 19 points and added seven steals, while Howland scored 15 on the night.

Owen Gagne chipped in with 10 points and 10 rebounds for McCann, which never trailed through the entire game after running out to an early 8-0 lead. The Falcons struggled to find their shooting legs, opening 0 of 5 from the field and committing four turnovers in the first three minutes.

McCann dominated early, but late in the game Smith caught fire from the field and rallied. After falling behind by as many as 13 points (34-21) with a minute left in the third quarter, Smith roared back within five and four points late in the game, only to fall short.

“It was a little sloppy out there toward the end, but we had a week with no practice or games, so I’m super happy with our effort,” Hornets coach Chris Bullett said after the game. “We struggled a little bit from outside. I’d say normally we make about half those outside shots we missed but we took good shots which is important.”

The Hornets dominated the offensive glass at times, offsetting a substandard shooting night. Gagne had five offensive boards, while Boisvert and Walter Mazza contributed four apiece. The hustle on the offensive glass carried over to the defensive end, especially in the first half where McCann held Smith to just 13 first-half points feeding off 10 team steals and a strong interior defense led by Boisvert, Gagne and Mazza.

The Hornets, though, took control of the glass and rode an 8-0 run on a fastbreak layup by Boisvert, stout work on the defensive boards by Howland and Mazza (each with seven boards on the night) and back-to-back 3s by Eric Rougeau and Boisvert to regain control in the final minute of the third. Smith, however, would not go away, taking off on a 6-0 run in the waning seconds of the quarter, crawling within seven at 34-27.

Boisvert and Gagne took over to start the fourth, though, as the lead stretched back to as high as 12 with 2:25 left. Boisvert spearheaded the onslaught with a layup in traffic with 5:51 left. Gagne followed with a short jumper in the lane and added a putback on a missed jumper following a Boisvert steal and Howland added a pair of free throws before Boisvert added another bucket driving the lane for a 44-32 lead.

Once again, the pest which would not go away, the Falcons fought back within five with just 54 seconds left before Howland’s big shot followed yet another Boisvert steal.

Smith closed to within 48-44 with 11 seconds left before Landon Champney buried a pair of free throws for the final margin, 50-44.

“We’re looking to push forward and we’re hungry,” Bullet said, noting the “team will go as far as Gagne and Cole (Boisvert) go, they’ll be there every night. But beyond that we have a great group and they’re the most coachable group we’ve had here.”