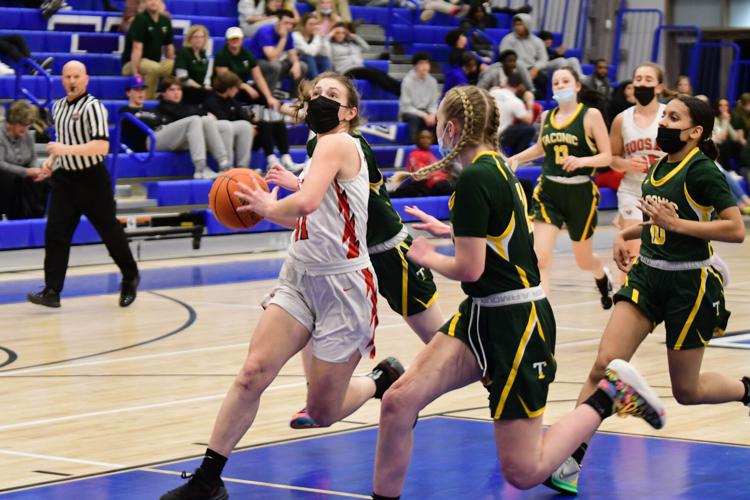 Surrounded by Taconic defenders, Hoosac's Averie McGrath runs to make a basket during the D-V semifinals that ended in a 72-38 win. McGrath finished with a game-high 20 points. 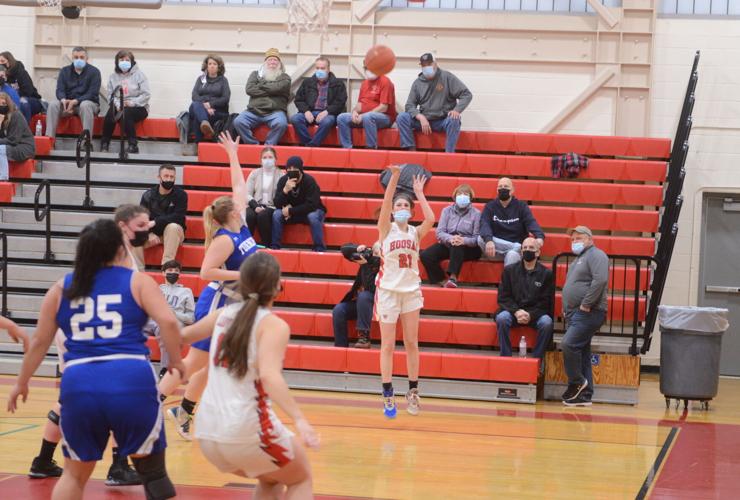 Hoosac Valley's Rylynn Witek lines up an open shot in the first half of the team's win over Turners Falls in the Class D Western Mass. Tournament. 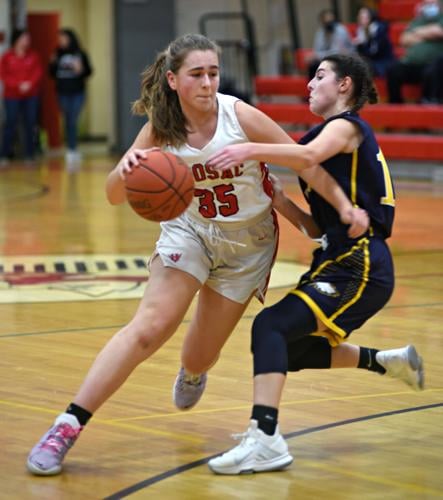 Hoosac Valley's Taylor Garabedian gets around Mount Everett defender Emily Steuernagle during the second half of a game earlier this season.

Surrounded by Taconic defenders, Hoosac's Averie McGrath runs to make a basket during the D-V semifinals that ended in a 72-38 win. McGrath finished with a game-high 20 points.

Hoosac Valley's Rylynn Witek lines up an open shot in the first half of the team's win over Turners Falls in the Class D Western Mass. Tournament.

Hoosac Valley's Taylor Garabedian gets around Mount Everett defender Emily Steuernagle during the second half of a game earlier this season.

The hall outside of the Hoosac Valley gymnasium is painted with pictures and lined with trophies, sharing the story of the school’s success.

The 2021-22 girls basketball team has made quite the case for sharing some real estate with the greatest storms to roll through 125 Savoy Road in Cheshire.

Over 20 wins, an inaugural Class D Western Massachusetts title, shared regular season Suburban Division crown and a 1,000-point celebration are just some of the landmark occasions in Holly McGovern’s second season as coach of the Hurricanes.

Averie McGrath and Rylynn Witek combined for 36 points as the top-seed Hoosac girls are headed to the MIAA Division V championship game after defeating No. 5 Taconic on Tuesday night.

All of that will take the backseat on Sunday as the top-seeded Hoosac Valley girls look for the program’s third straight state title with an MIAA Division V championship bout against No. 3 Hopedale at the Tsongas Center in Lowell.

“My model is, you take things day by day,” McGovern said in an interview with The Eagle in December of 2020. “If you do the right things, success will come. It’s one of those models. I always want to drive myself and hopefully, the players can follow suit.”

McGovern took over the program after the school parted ways with longtime and wildly successful head coach Ron Wojcik. Her first season at the helm was the abbreviated COVID-19 year.

Hoosac’s first day of the 2021-22 season was a big one, the Wahconah girls came to town on Dec. 10. A 57-52 win over a county rival was a nice way to start the season for the Hurricanes, but it also set the tone for things to come.

Averie McGrath knocked down four 3-point shots and scored 23 points, the first of 12 games with 20 points or more this season. Additionally, the Hoosac senior hasn’t scored less than 10 points in a game since March 6, 2021.

“I was excited to see our discipline and our ability to find open looks,” McGovern said after the win over Wahconah. “We know we’ve got a long way to go, we know this. At the same time, I like seeing some of the pieces.”

By the end of the year, Hoosac valley was obliterating opponents with an offense that stretched the court and a group of forwards that can always find a mismatch.

“We all look for the open shot,” McGrath said after hoisting the Western Mass. title in a win over Lee. “There is always a better shot. Driving and kicking the ball out, in-and-out works wonders.”

Taylor Garabedian had eight points, eight rebounds and five assists as the first player off Hoosac’s bench in the final, played at MCLA.

“[Taylor’s] ability to handle the basketball and create passing lanes for other players,” McGovern said following the Western Mass. championship. “Overall she does a nice job and we’ve been getting some easier looks within the post, but we can certainly bring her out to the wing.”

Alyssa Garabedian had 10 points, five boards and three rebounds in the state semifinal win over Taconic on Tuesday. Gabby Billetz brings the frontcourt together as a shot-altering, rebound-capturing and fighting-for-every-loose-ball center that anchors a defense allowing less than 25 points per game since the Western Mass. tournament began.

The Hurricanes have really leveled up on the offensive end, outscoring opponents by an average of 32 points in the postseason. McGrath scored at least 20 points in each of the last three games and cracked 1,000 career points with eight treys against Carver in the D-V quarterfinals.

McGrath isn’t the only scorer benefiting from Hoosac’s inside-out philosophy on that end. Rylynn Witek scored double-digit points in nine of the last 11 games, notching 17 points in the Round of 16 against Georgetown and another 16 points in the semifinals against Taconic.

She showcased a bit of everything over the last three games with six made triples and 13 points after earning a trip to the line.

“I really go based on how the defense plays me,” Witek said back on Feb. 23. “If they’re coming at me, I know to either go or move the ball into the lower post. If there is a player sitting back, I’ll take the open shot.”

A variety of options on offense and a stifling defense was the difference as the Hoosac Valley girls returned to the Western Mass. mountain top with a win over Lee in the Class D championship.

If teams try to slow down McGrath and Witek with doubles on the perimeter, Ashlyn Lesure is heating up with 33 points over the last five games, denting the scoreboard with at least one 3-pointer in four of her last six games.

Hoosac hasn’t missed a step on either side of the court, but Sunday’s test will pack a punch that has weathered its fair share of storms.

Bri Frongillo is leading the pack of Blue Raiders to Lowell on Sunday after scoring an average of 36 points over the last four games. It may sound hard to believe, but the 2,000-point scoring Division I Bryant-bound guard has reached a new level since the tournament began.

The Hopedale senior knocked down a career-high eight 3-point shots and finished with 41 points against No. 30 Bromfield in the Round of 32. Two games later, while scoring 48 points in a win over No. 6 Lee, she pushed that career-high to 10 makes from beyond the arc.

The Blue Raiders cruised through the first three games before a two-point upset of No. 2 Springfield ICS in the Final Four. Frongillo scored 31 points and won the game with a pair at the stripe just seconds before time expired. Senior Lilah Casey had an 11-point burst in the second half, helping Hopedale steer the ship to the finish line.

A new foe is coming for the throne, but Hoosac has waited two years for a chance to remind the rest of the state that this tournament goes through Cheshire.