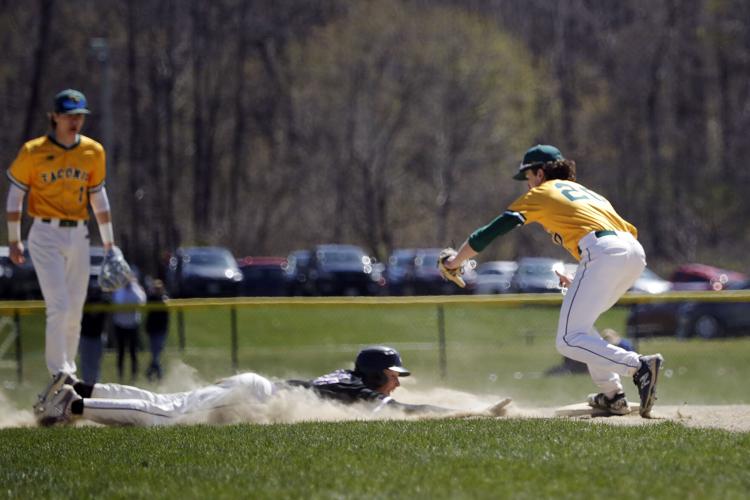 PHS’s Aiden Hillard fails to slide back to second base before being tagged out by Taconic’s Adam Lazits in a baseball game at Clapp Park in Pittsfield. Saturday, April 30, 2022. 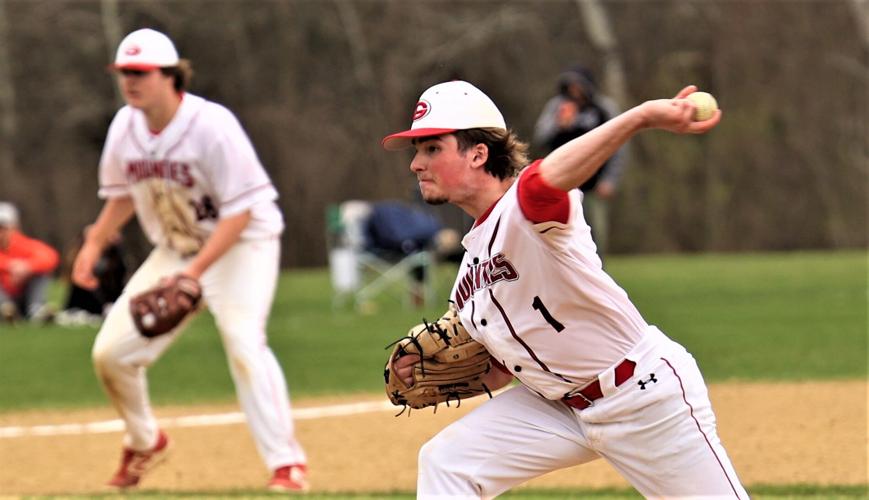 Jack Cangelosi and the Mount Greylock baseball team were ranked second in Division V in the MIAA's first look at power ratings for the spring state tournaments. 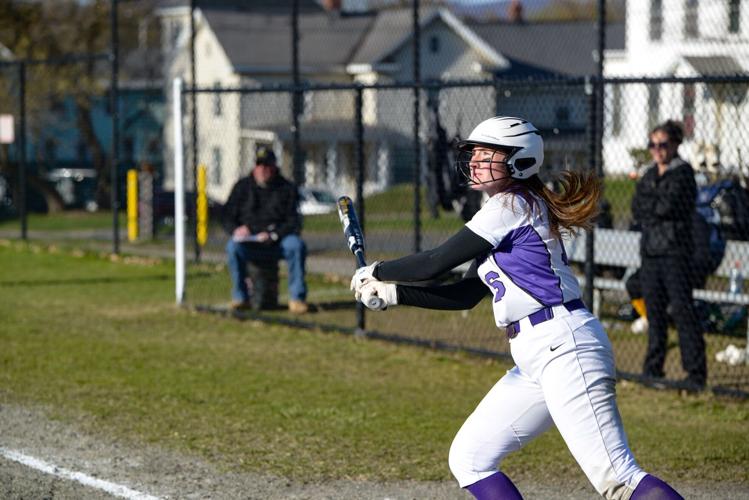 Juliana Johansen and the Pittsfield softball team are ranked 10th in the new MIAA power ratings. 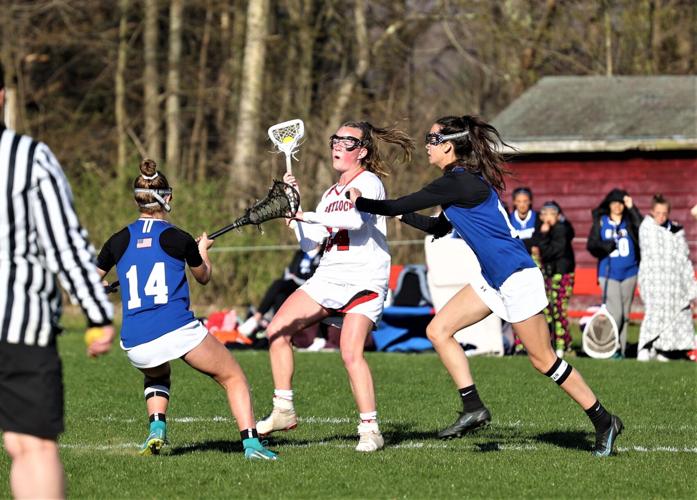 As the calendar flipped from April to May, the Massachusetts Interscholastic Athletic Association has unveiled its first power ratings of the spring sports season.

The MIAA released the ratings for baseball, softball and lacrosse on Friday. Tennis ratings are not yet out.

Of all the Berkshire County teams that compete in the spring, the highest-rated squad is the Mount Greylock baseball team. Coach Rick Paris' Mounties are ranked second in the Division V field.

The rankings will be released weekly up until the start of their respective tournaments, when the teams will be seeded in the third statewide tournament structure.

The top 32 teams are placed in the brackets, along with any team that finishes .500 or better.

Division V is where the majority of Berkshire County teams reside. And based on the power ratings, two of those six teams would make the tournament.

The Mounties are rated behind only Hopedale of Central Massachusetts. Hopedale was the No. 2 seed in last year's Division IV Central tournament, losing to Tahanto in the championship game.

Three of the top five schools in Division V are Central Mass. schools. Behind Hopedale and Greylock, Frontier Regional is third, followed by Oxford and Douglas.

Hopkins Academy, the reigning MIAA Division IV champion, is currently seventh, while Granby is 10th, in the 76-team field.

Mount Everett was ranked 21st, while McCann Tech was 41st, Drury was 43rd, Lee was 47th, Lenox was 55th and Hoosac Valley was No. 70. All of those rankings could change dramatically over the next several weeks.

In fact, one could anticipate a change for the Hornets, who rolled to a 10-0 win over No. 7 Hopkins on April 30.

Last year, the non-nicknamed Taconic baseball team marched through Western Massachusetts to win another title, then went on to beat Advanced Math and Science Charter School in the Division III state semifinal game and then beat Medfield 14-10 on an historic day at Wahconah Park, to win the first state championship on that field in a couple of generations.

Taconic, now nicknamed the Thunder, are the sixth-ranked team in the inaugural D-III ratings. Two teams that Taconic is familiar with top the list.

Austin Prep, which beat Taconic for the Division III state title back in 2018, is the No. 1 team in the division. Right behind Austin Prep is Medfield. Bishop Stang, Oakmont and Foxborough round out the top five.

AMSA, a 4-2 loser to Taconic at Springfield College in the 2021 semifinal, is in Division IV, and the Eagles top the first rankings. Tyngsborough is second, followed by Manchester-Essex, Abington and Amesbury.

The highest rated Western Mass. teams are No. 11 Monument Mountain and No. 13 Southwick. Hampshire Regional is 32nd, followed by No. 33 Wahconah and No. 57 Pioneer Valley Christian Academy. There are 57 teams in Division IV.

Easthampton is 17th and Southwick is 22nd, and both fall inside the top 32. Monument Mountain was outside the top 32, as the Spartans are ranked 41st.

There are 62 teams in Division III, and Pittsfield is the only Western Mass. team in the top 10. The Generals are 10th in the first week ratings. The top five are St. Mary's (Lynn), Greater New Bedford Vocational/Technical School, Dighton-Rehoboth, Middleborough and Hudson. The next highest-rated Western Mass. team is No. 45 Chicopee.

Eight Berkshire County teams are in the 66-team Division V field, and five fall inside the top 32.

The reigning Central-Western Mass. boys lacrosse Division III champions are currently the No. 3-rated team in the 56-team Division IV field. Wahconah is one of three Berkshire County teams in the D-IV field. McCann is rated 41st and Pittsfield is 52nd.

The top five in D-IV are Sandwich, Cohasset, Wahconah, Weston and Littleton. The No. 2 team from Western Mass. is South Hadley, rated 28th overall.

Hoosac Valley cracks the top 32 in the 50-team Division III boys field, as the Hurricanes open the ratings season at No. 27. Lenox is currently 36th, but with an over .500 record, would qualify for the tournament.

The top five boys teams in D-III are Medfield, Norwell, Hanover, Grafton and Foxborough. The top Western Mass. team is No. 12 Pope Francis.

The top-rated girls lacrosse team from Berkshire County is Division IV-housed Mount Greylock. The Mounties are 11th in the 56-team field. Wahconah is 42nd and Pittsfield is 56th.

Hoosac Valley was 40th in D-III, with Lee 48th. The Hurricanes and Wildcats were both well over .500 though, with 6-0 and 4-2 records, respectively.