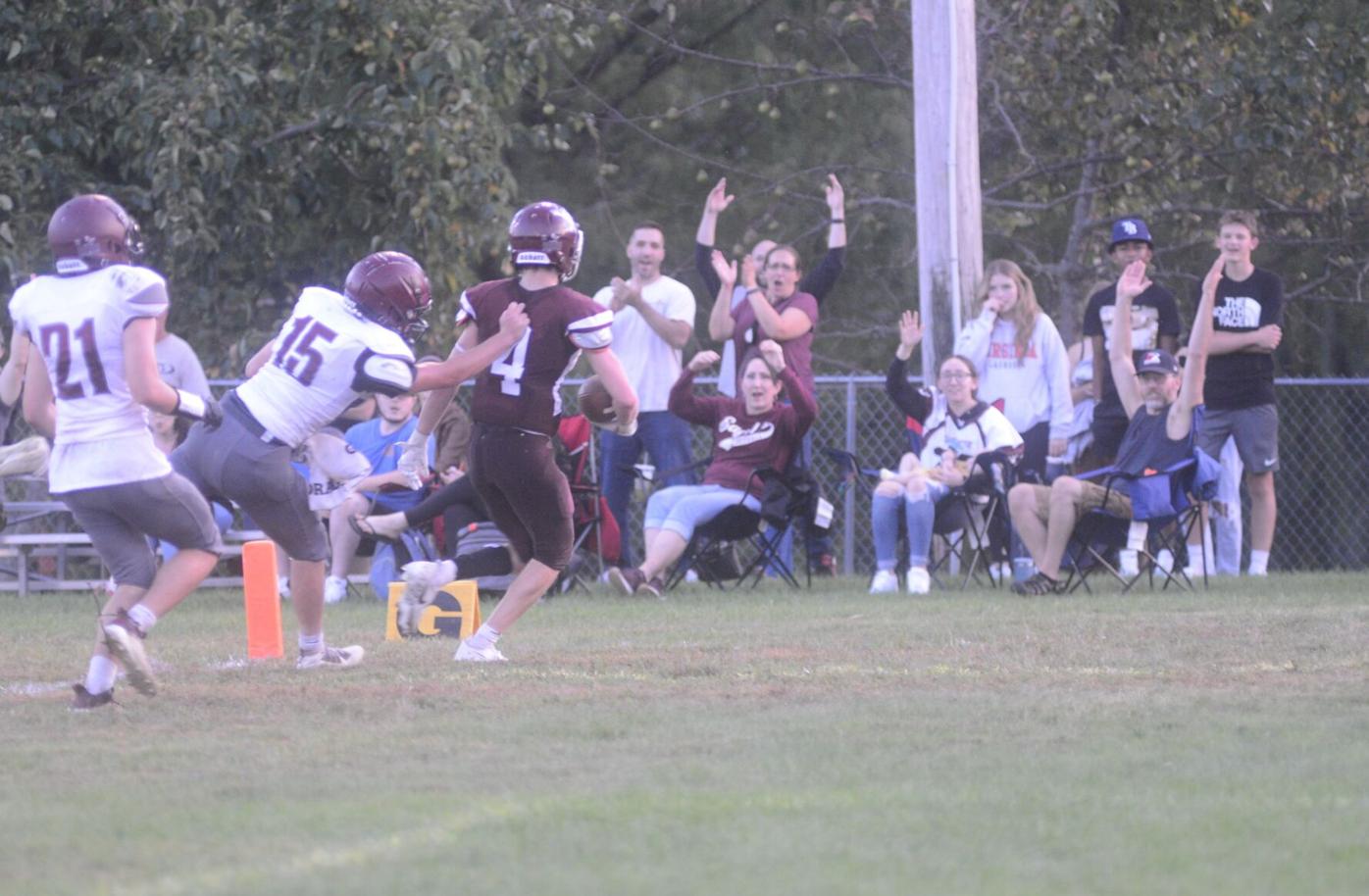 Easthampton's Luke Kraus celebrates with fans as he scores a touchdown during Saturday's game against Monument Mountain. 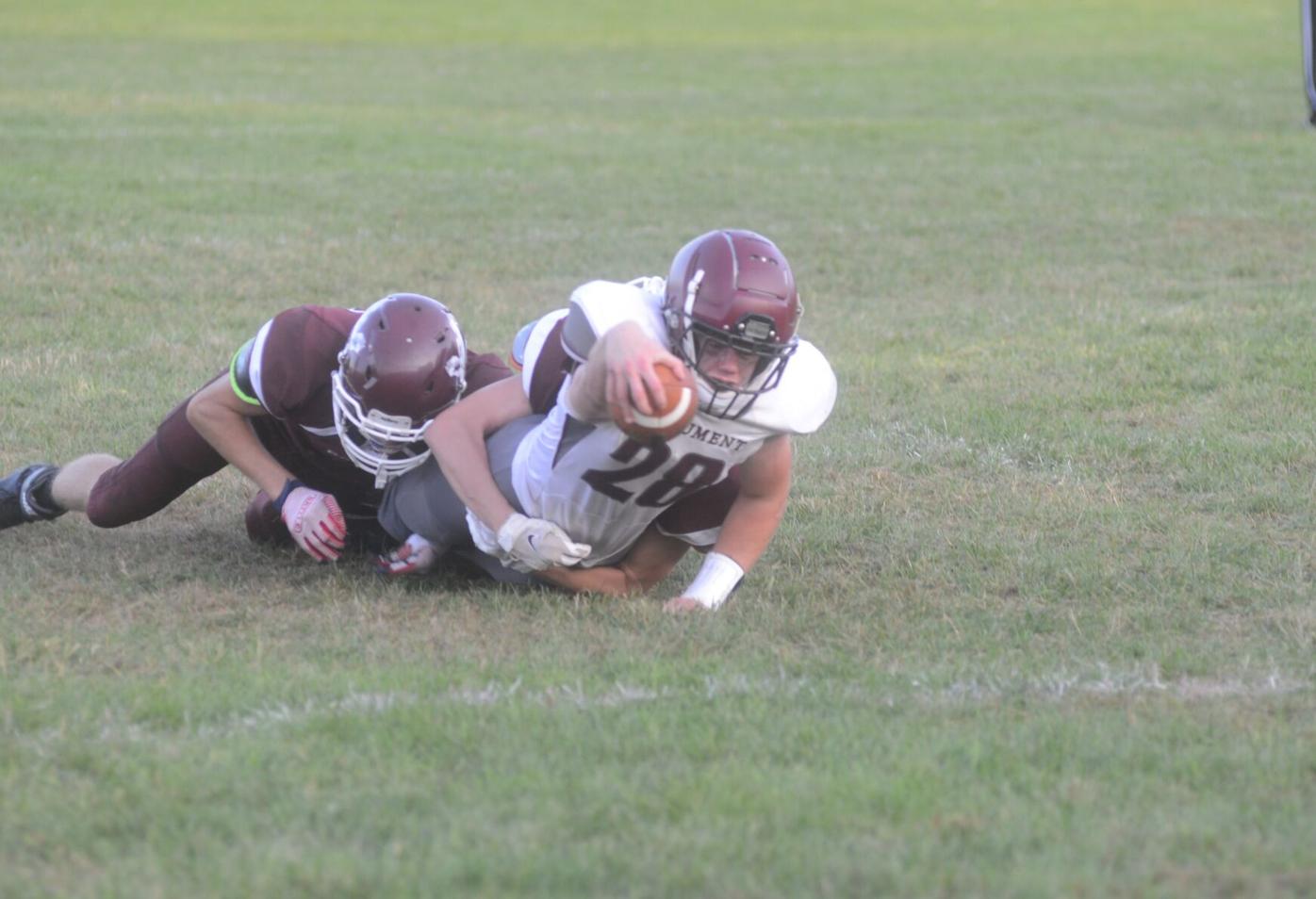 Monument Mountain's Nick Henderson stretches for every yard he can get near the goal line during Saturday's game in Northampton against Easthampton. 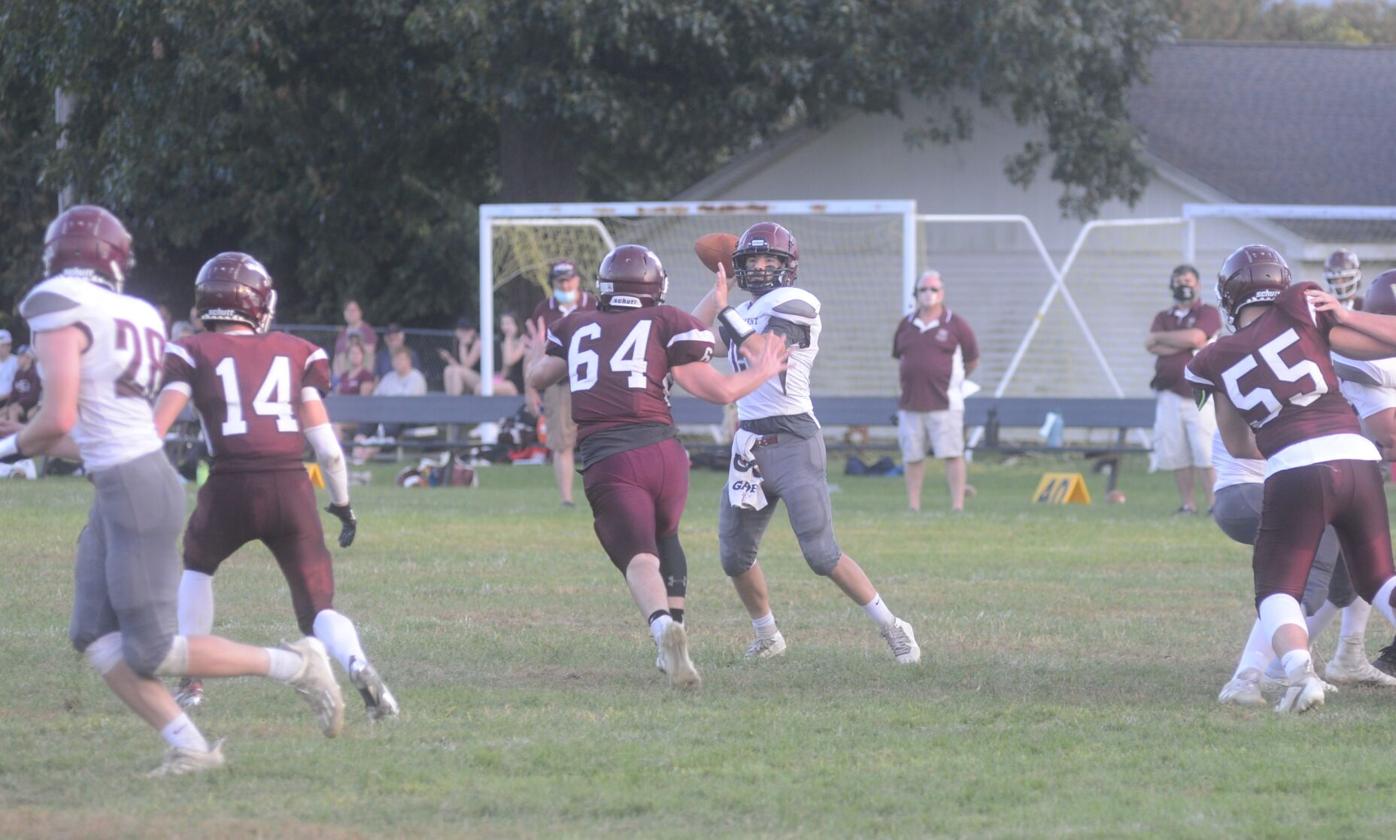 Monument Mountain quarterback Hunter DeGrenier ignores pressure as he searches for a receiver in the flat against Easthampton on Saturday. 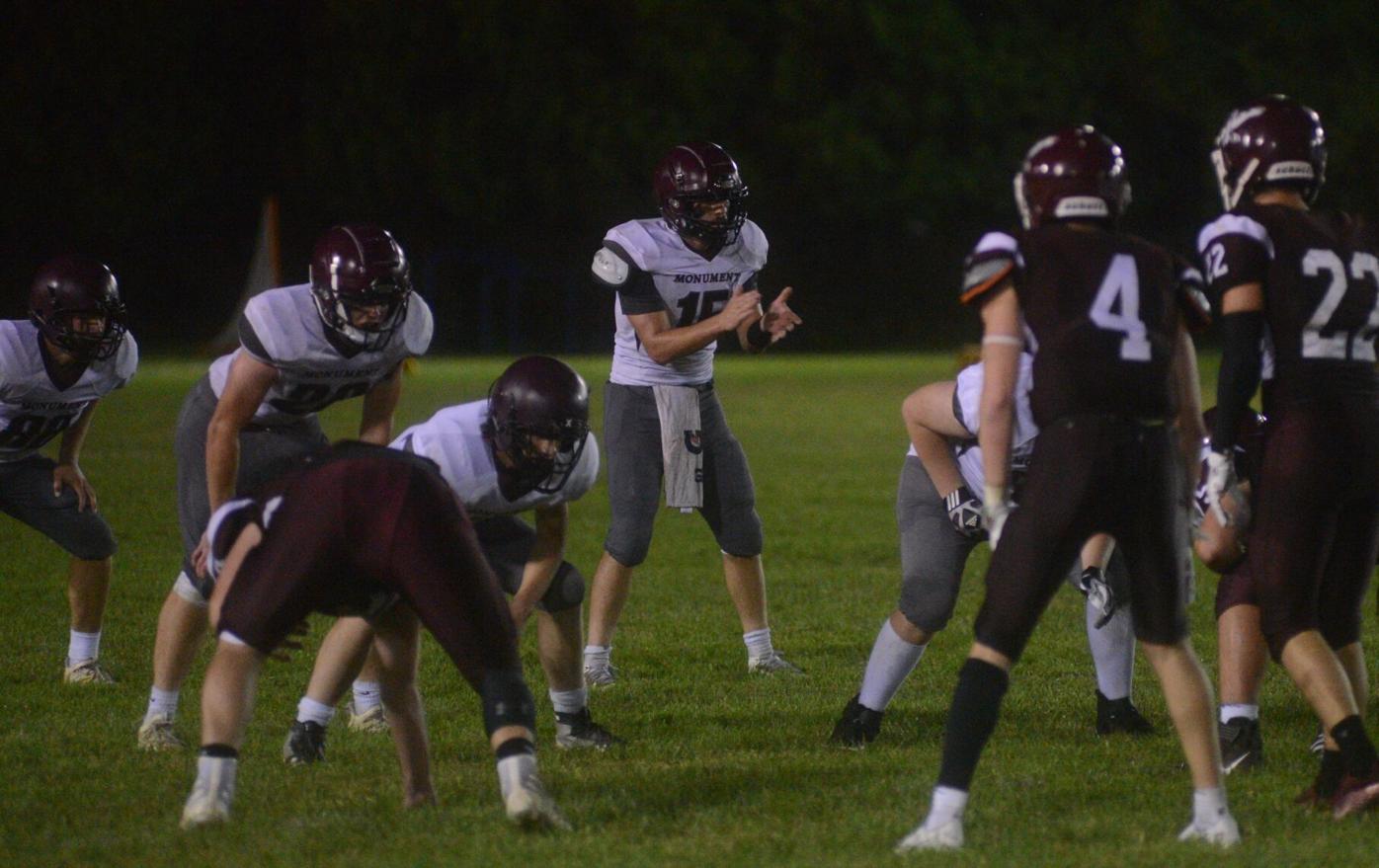 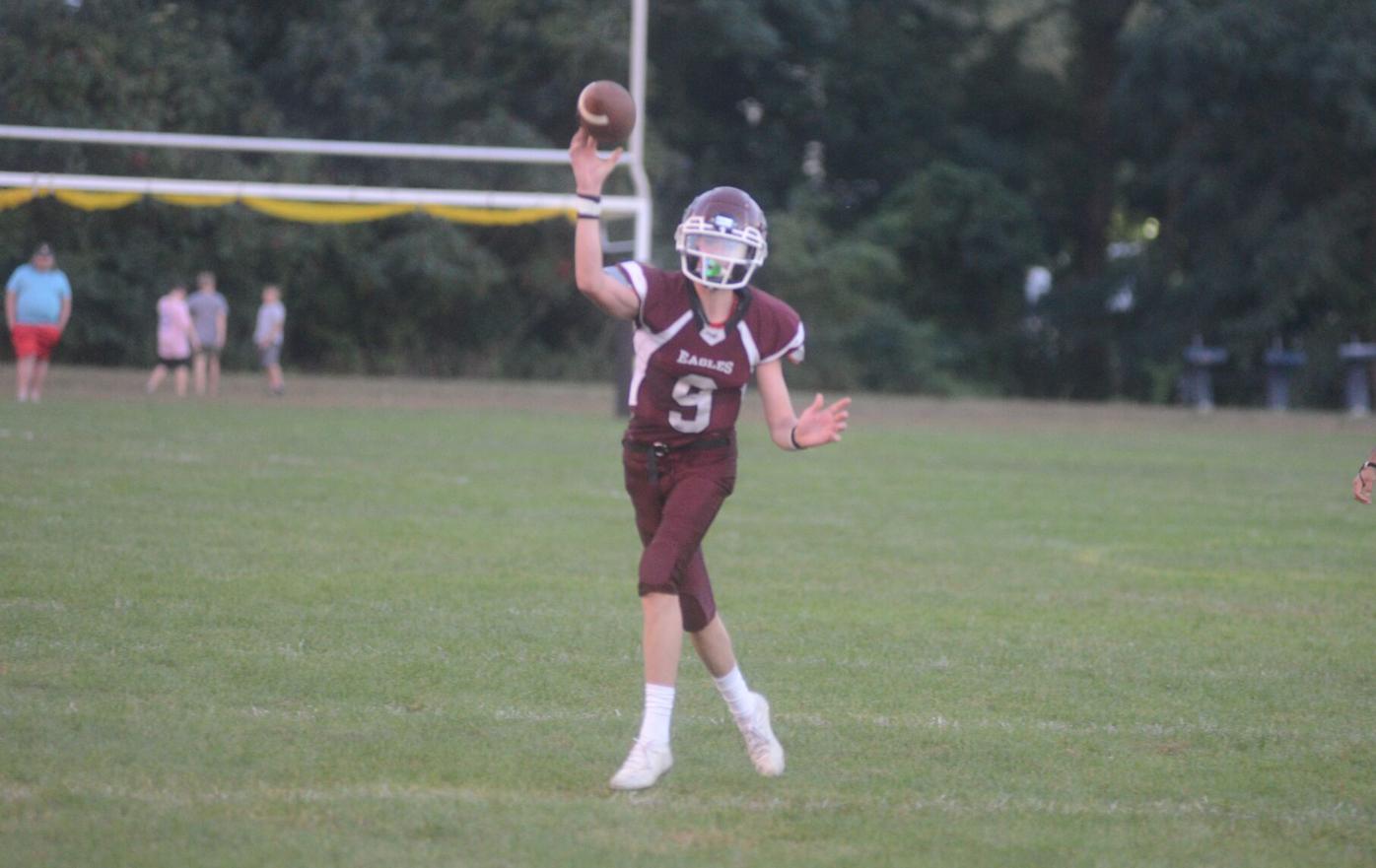 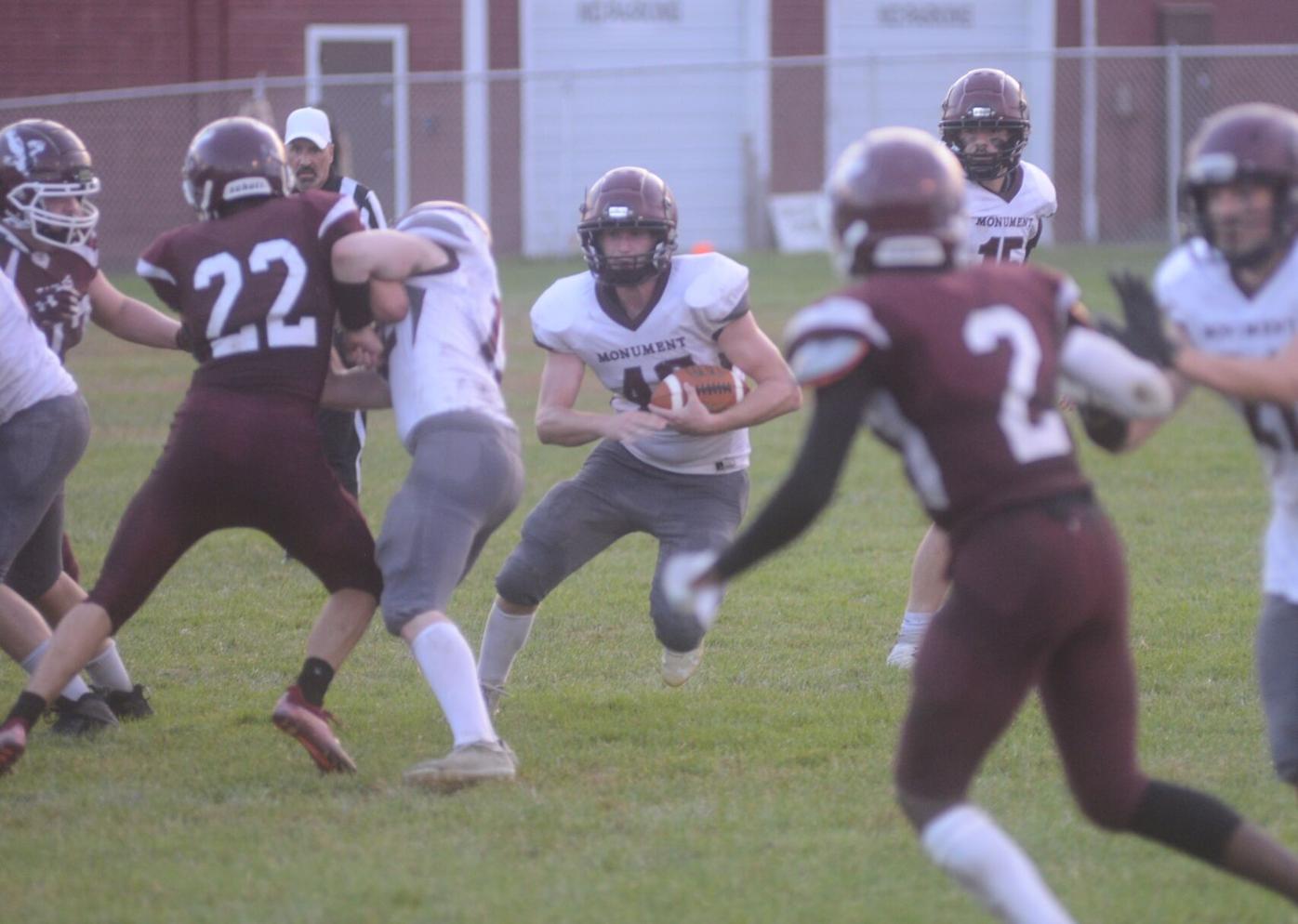 NORTHAMPTON — The Easthampton offense had everything — planes, trains and automobiles — working for them on Saturday.

The Eagles and quarterback Shea Healy threw for 110 yards and three touchdowns while the stable of backs rushed for for another 163 yards in a 32-0 win over Monument Mountain.

The planes, Luke Kraus and Keith Cudworth, combined for 74 yards and three touchdowns on six receptions through the air. The automobiles, Bb Jean Jacques, Angel Moody and Giancarlo Osiecki combined for 106 ground yards on nearly six yards per carry.

Lastly, Healy was the train that kept the chains moving, but he credited the offensive line for keeping the team on track.

“These guys haven’t let me get touched in the last two games,” Healy said following the win. “We can run the ball like a bunch of animals, our offensive line features some of the best blocking that I’ve seen in the past few years and our receivers are amazing at catching the ball.”

Monument (0-2) won the toss and kicked the ball away to begin the game. Easthampton built a nine-play drive that ended with a two-yard scamper from Healy for the game’s first score. Healy then found Cudworth for a 10-yard touchdown, pushing the lead to 12-0 with five minutes left in the first quarter.

The Spartans moved the ball down the field on the following drive and Nick Henderson brought it down to the 1-yard line on a 9-yard reception from quarterback Hunter DeGrenier. The Eagles, though, made the last yard feel like a mile with two-straight stops before Cudworth sacked DeGrenier and smothered the drive.

“We have to learn from every mistake and every game,” Monument coach Daren Carlson said. “I know I have to get a lot better and am trying to learn at the same time they are.

“We are missing opportunities and that is costing us points. Then, it just snowballs.”

Easthampton started on its own 26, before marching 74 yards on 13 plays for the third touchdown of the half, a 25-yard pitch-and-catch from Healy to Kraus. The Spartans forced the Eagles into a third-and-10, third-and-8, second-and-15 and the drive featured two false starts. Additionally, Jay Howard shut down a pass attempt and Shaun Frank had a tackle for a loss, forcing a third-and-long situation.

It didn’t matter what situation Healy and the offense were in, he felt at home inside the white lines.

DeGrenier completed eight of his 16 pass attempts on the night for 56 yards. Reece Mullen ran the ball seven times for 29 yards and Frank, who ran the ball 10 times in the second half, finished with 40 yards on 11 carries.

Monument came out of the half with a nine-play drive that brought the Spartans inside the Easthampton 40, but the game’s lone turnover ended the possession. A pass backward behind the line of scrimmage could not be brought in and Kraus picked up the fumble and ran it 69 yards in the other direction for a touchdown, making the score 32-0 midway through the third quarter.

Easthampton is now 2-0 after topping Mahar 42-0 in Week 1. The Eagles will play Hoosac Valley on Oct. 1 and Lee on Oct. 15. Meanwhile, the Spartans are back at home next weekend to face Athol before a Week 4 bye. Kickoff between the Bears and Spartans is slated for 7 p.m. in Great Barrington on Friday.

“We can go as far as we want this season as long as we keep on working,” Healy said, “this team is working towards a championship.”