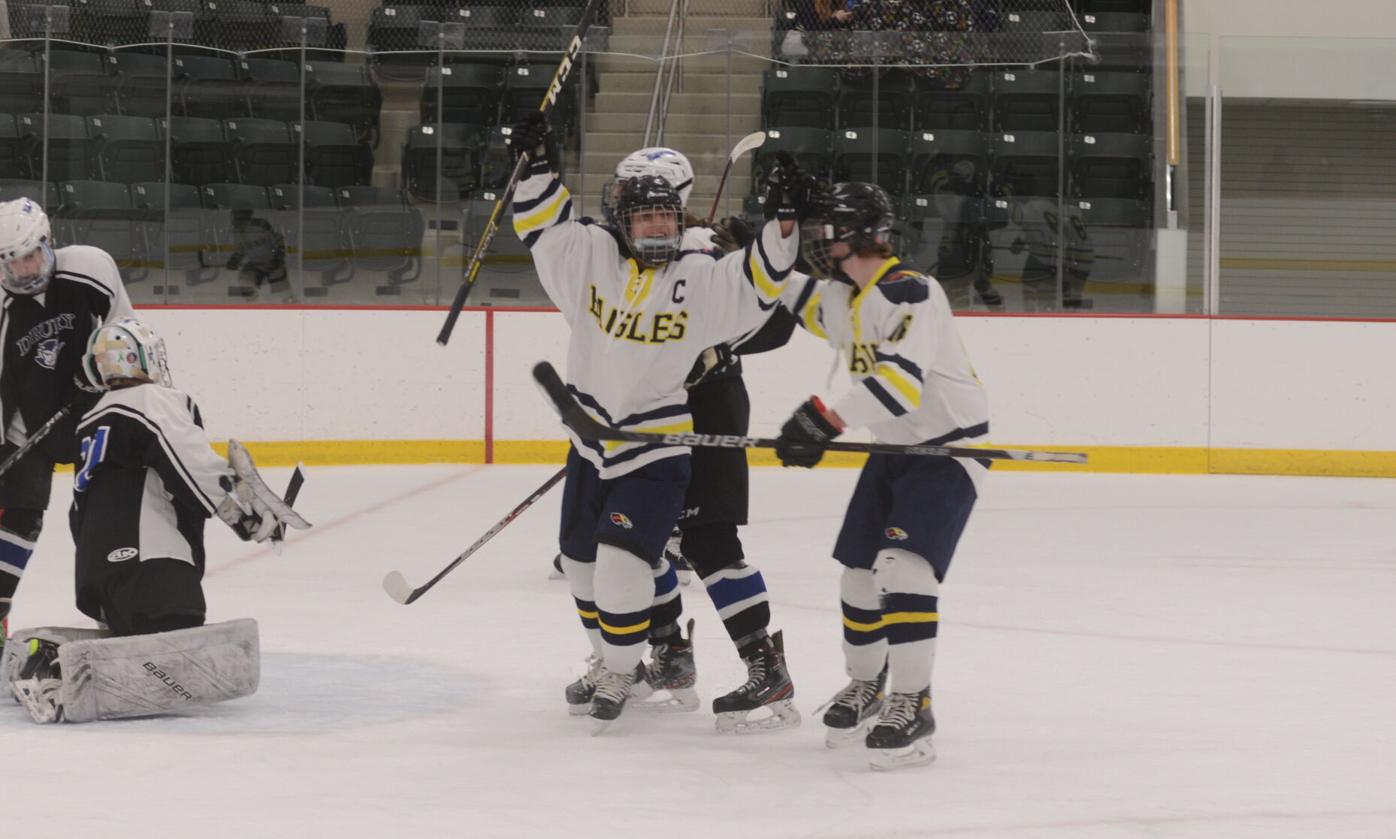 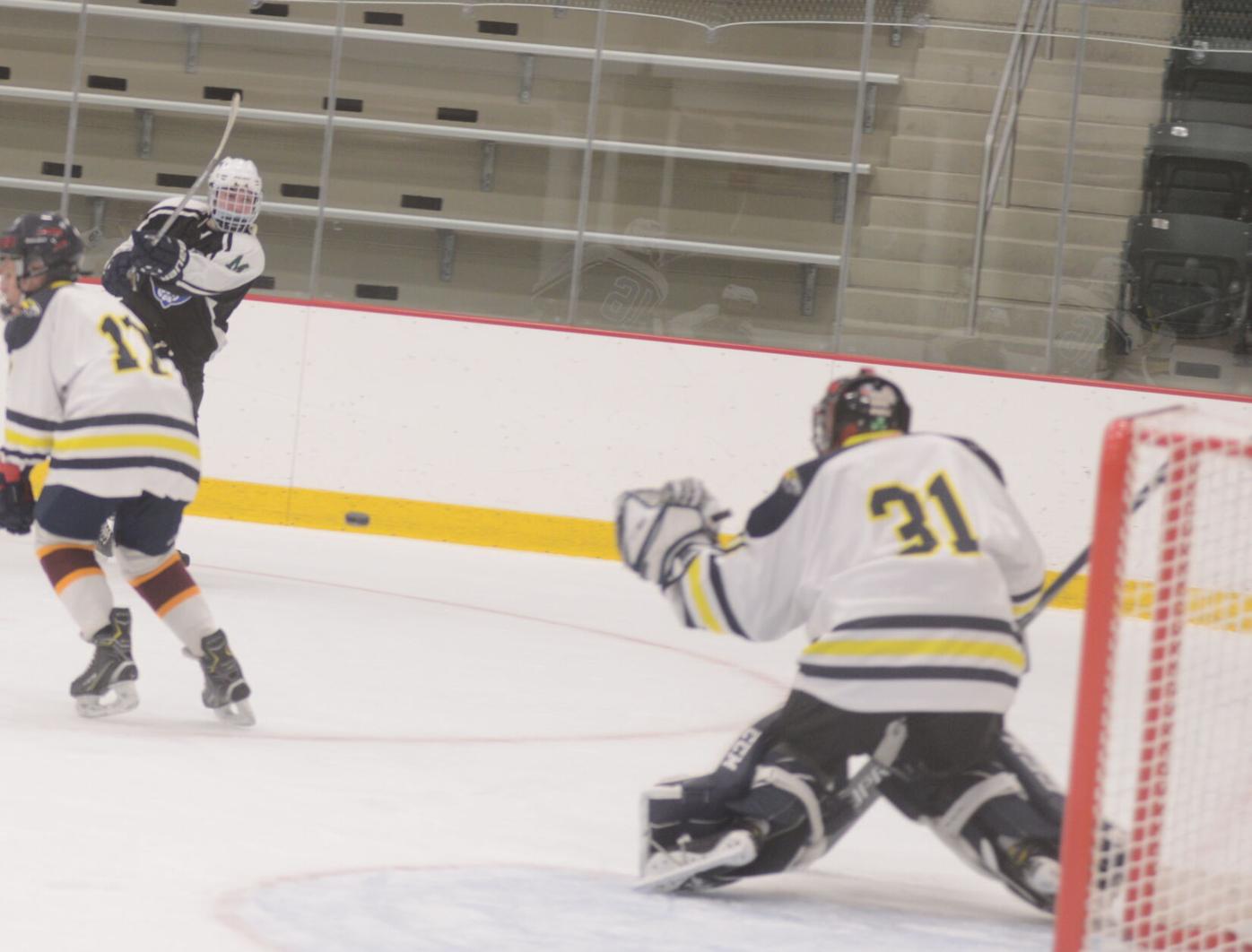 Drury's Tyler Pettit fires a shot towards Bobby Baer inside the Mount Everett net. The Eagles topped the Blue Devils 5-4 at Berkshire School on Friday night.

SHEFFIELD — The Eagles have officially entered the win column.

A four-point spurt across the first and second periods, along with a late defensive stand, was the secret sauce that went into Mount Everett hockey’s 5-4 win over Drury on Friday night.

“It feels real nice — it’s been a while,” Mount Everett left wing Luke Kamienski said of picking up the season’s first dub. 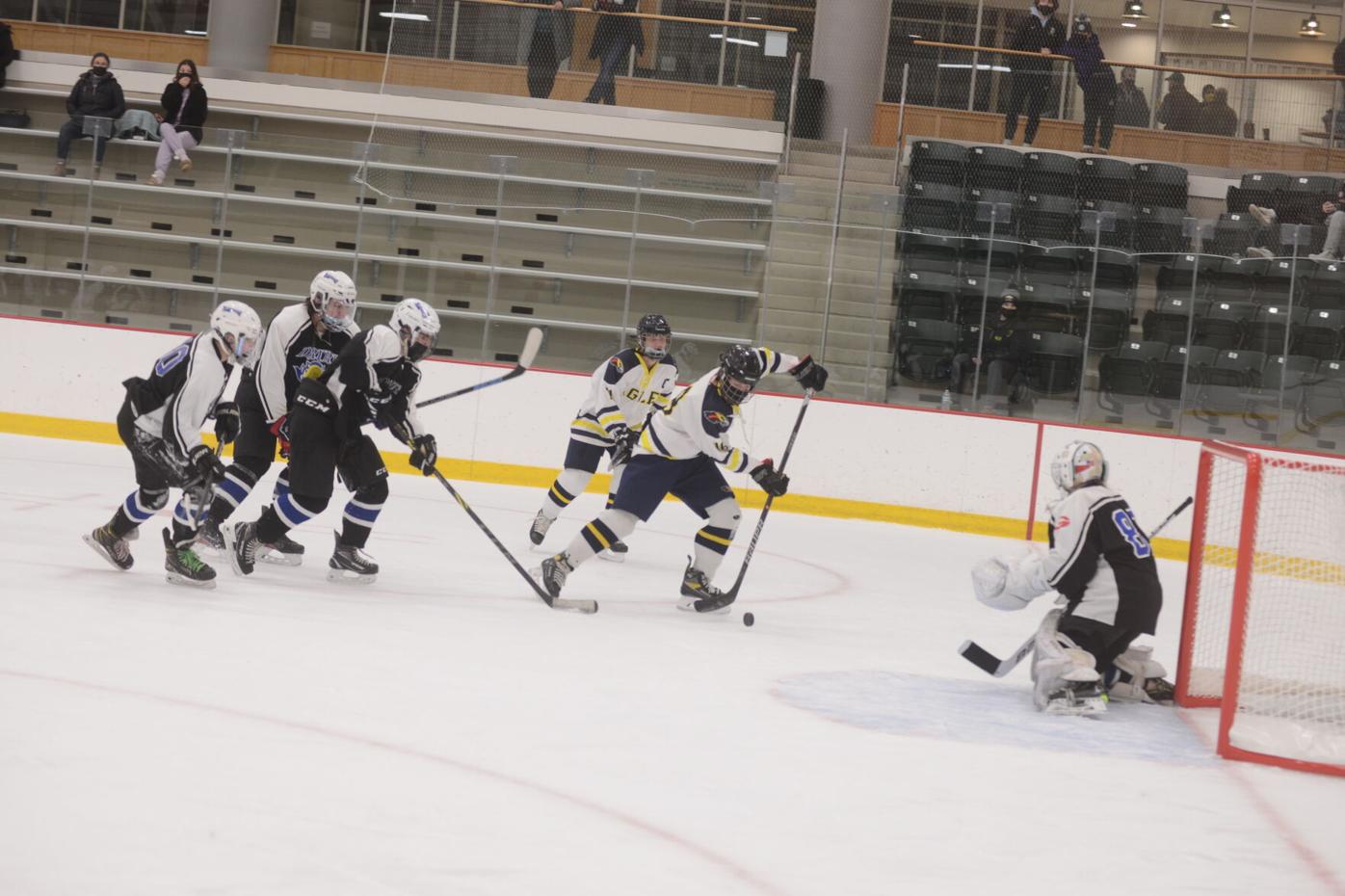 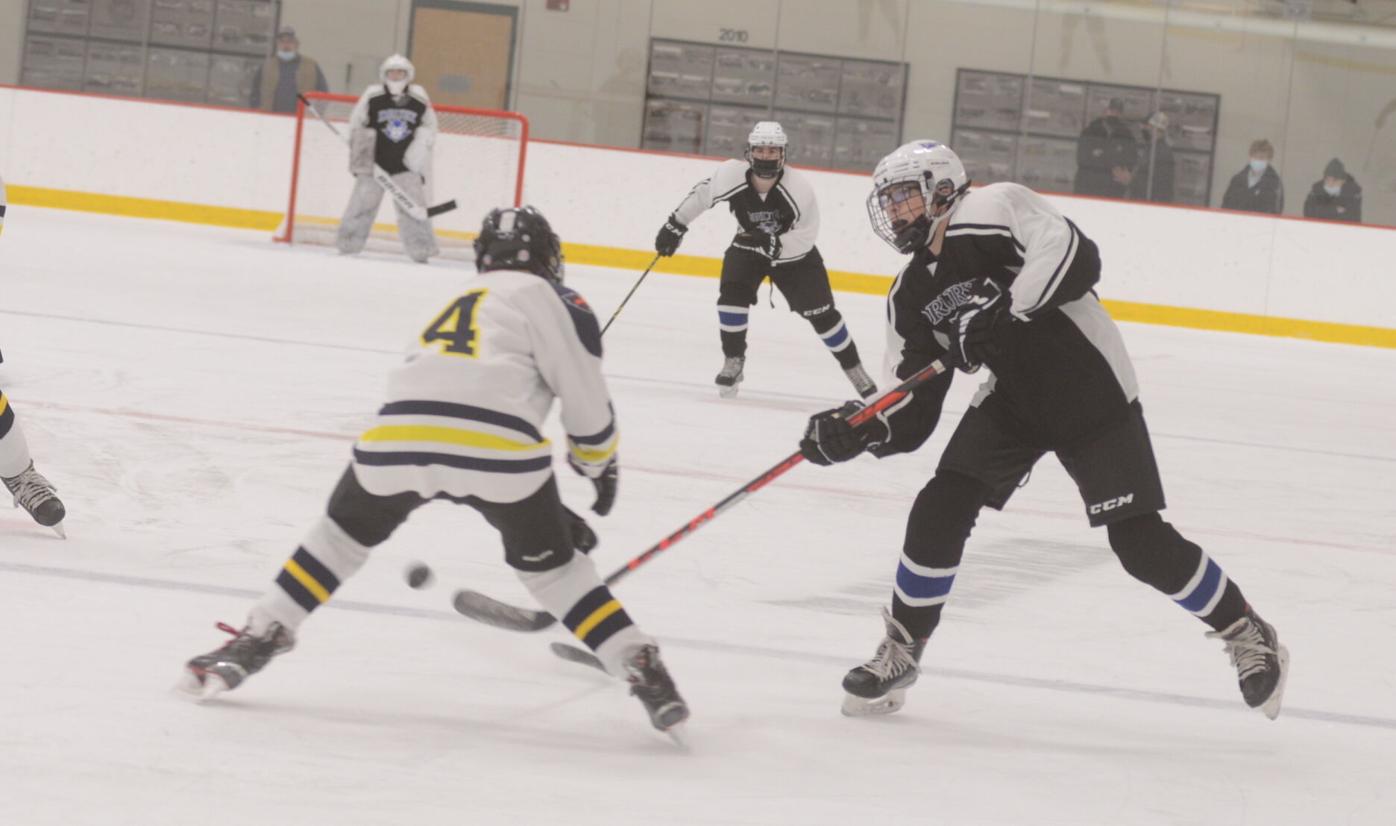 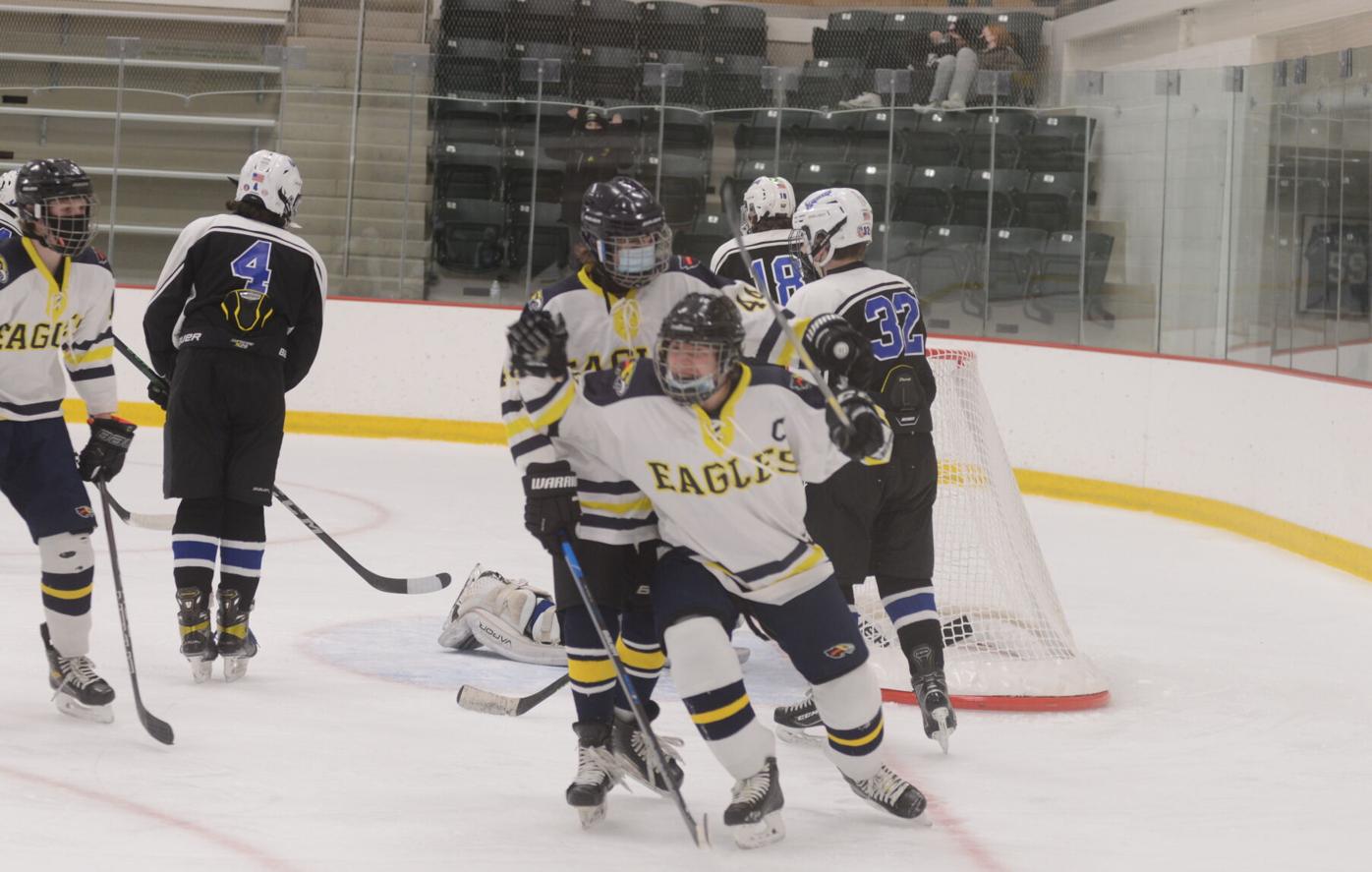 Kamienski was at the heart of everything the Eagles accomplished on the night and it begin less than three minutes after the puck dropped.

Aiden Fennelly popped the puck down to Drury’s end of the ice and kept it there until Kamienski connected with Dominic Velasco for the game’s first goal at 2 minutes, 50 seconds.

Velasco was Everett’s fuse because just one spark could mean disaster for the opposition. The speedy right wing capped a four-score run by the Eagles late in the second period with a short-handed goal, which pushed Mount Everett’s lead to 5-1 with roughly five minutes left in the frame.

“I feel like it shows others that if we work hard, we’ll get goals,” Kamienski said.

Most of Friday’s match was a numbers game as the Eagles took advantage of a five-minute major by the Blue Devils in the first period.

Traffic was building in front of the Drury net and keeper Abby Fuls fended off a swarm of Eagles — and even registered a save with the handle of her stick.

“She worked all night, a lot of shots and a lot of traffic in front of her and even some fast breaks — she saw it all today,” Drury coach Derek Durocher said. “She kept us in it and gave us a chance.”

Despite the stand, the pressure eventually boiled over as Phillip Enoch found Kamienski for his first goal of the night. The goal broke the tie with three minutes left in the first.

“We saw the numbers advantage we had,” Kamienski said. “Just try to be the first person to the puck and dig deep.”

The Eagles kept digging into the second quarter and only needed 33 seconds before finding some more treasure. It was a group effort, Gabe Fahey and Willem Vollmer were credited with assists on Kamienski’s goal, which pushed the lead to 3-1.

Despite the growing deficit, the Blue Devils refused to go away. Drury had four different goal scorers on the night and the first on the list is Wes Emerson, who tracked a puck off of Mount Everett’s post before returning it to the sender, tying the score at 1-1 less than five minutes into the first period.

Trailing by four with six minutes left in the second period, Nolan Booth and CJ Diesz joined forces for Drury’s second goal. Four minutes later, Nick Gilman jumped into the stat sheet, coming off a Colin Booth assist, and suddenly it was a two-score game.

“We got better as the game went on,” Durocher said. “They kept fighting and they wanted it. We’re down and pretty depleted in terms of numbers right now but the effort was there.

“We didn’t play very well the first period and into the second, but kept working to claw back to it.”

The claws were sharp enough for one more goal as Owen Taylor found the back of the net with the help of a Brayden Canales assist, which cut the lead to 5-4 with six minutes left.

Drury pulled its goalie for the last minute of the game, paired with the fact that the Blue Devils were on a power play. Mount Everett was forced to play 6 on 4 but the lead stood firm behind a strong defense and four saves by keeper Bobby Baer in the last three minutes of the game.

The win bumped Mount Everett to 1-3 on the year and drops the Blue Devils, who had four games postponed thus far, to 1-2 through three games.

The Eagles will voyage to the Fitzpatrick Skating Arena to play the South Hadley and Holyoke co-op on Saturday. The puck is slated to drop at 2 p.m.

“We gotta rest up after a hard game and we have to go out tomorrow and do the same thing,” Kamienski said. “Back-to-back games are hard, but as long as we’re digging deep and getting to the puck, I think we’ll be fine.”