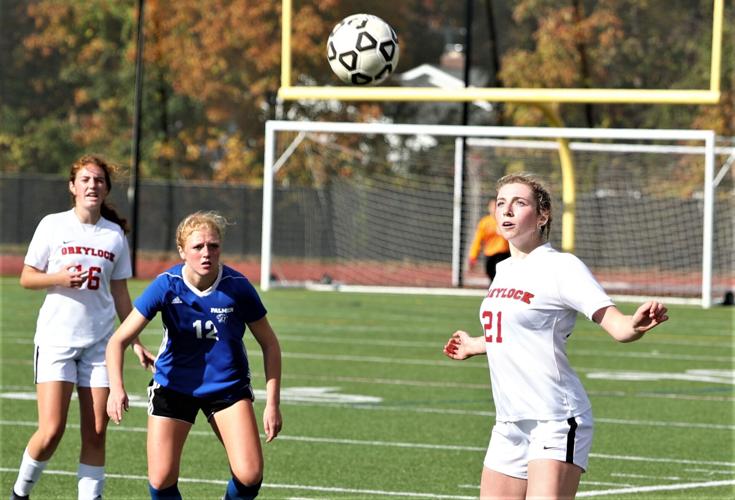 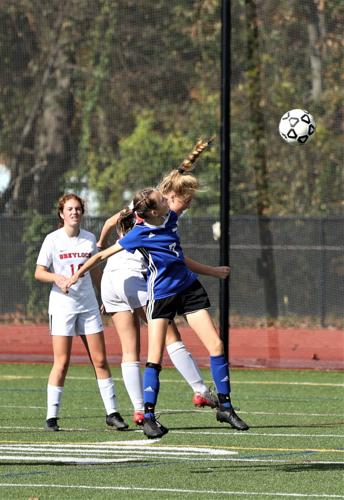 AGAWAM — Since allowing six goals to Palmer in a mid-September loss, Mount Greylock girls soccer had a goal of proving not just to itself and the Panthers, but to the rest of Western Massachusetts that the Mounties belonged on the same pitch.

Enter into evidence the Western Mass. Class C championship game on Sunday at the neutral site of Agawam High School, where no winner could be declared after 80 minutes of regulation soccer. In fact, it took until officials’ time-on-the-field inside the last two minutes of overtime for a victor to be decided. 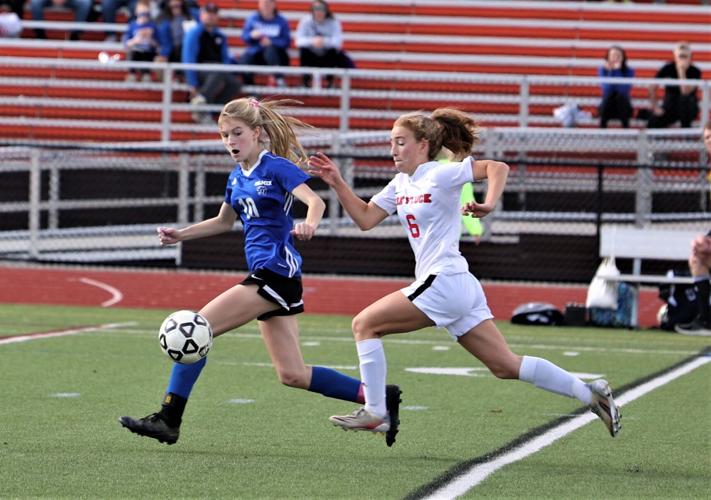 Mount Greylock's Lily McDermott tracks down a through ball. 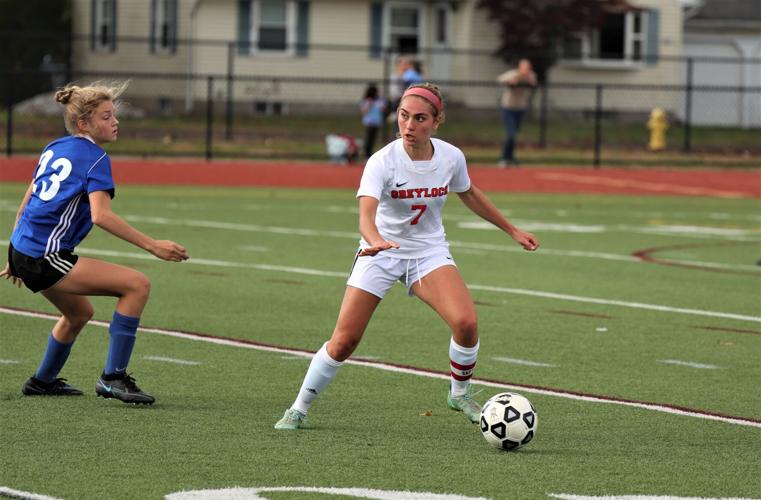 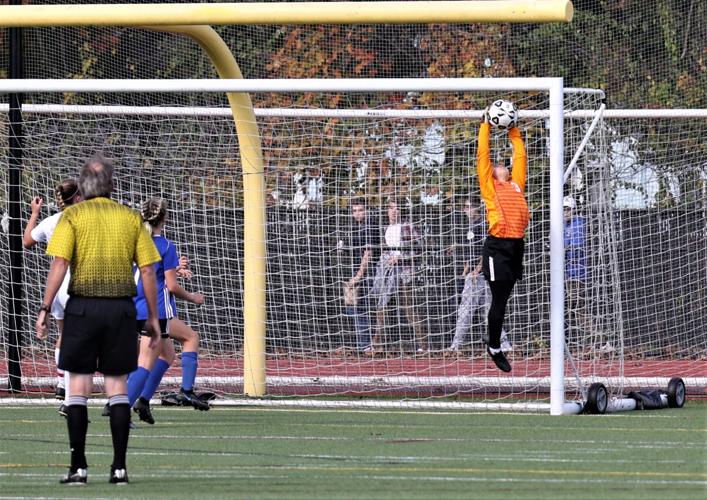 Mount Greylock goalkeeper Mai O'Connor leaps up to make a save. 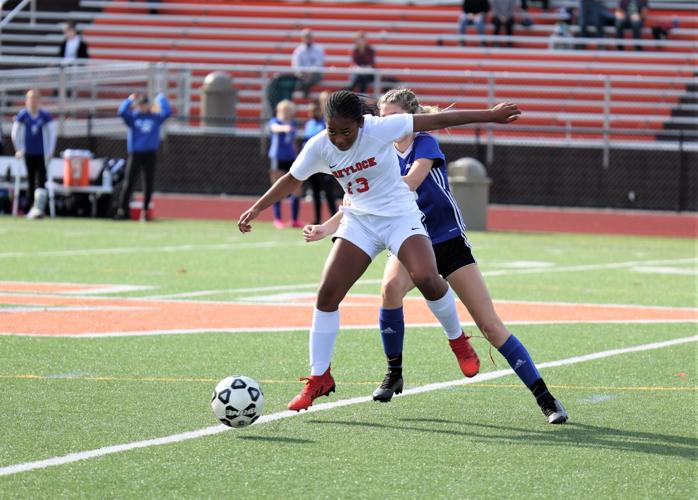 Mount Greylock's Maire Scanlon shields the ball away from a Palmer defender. 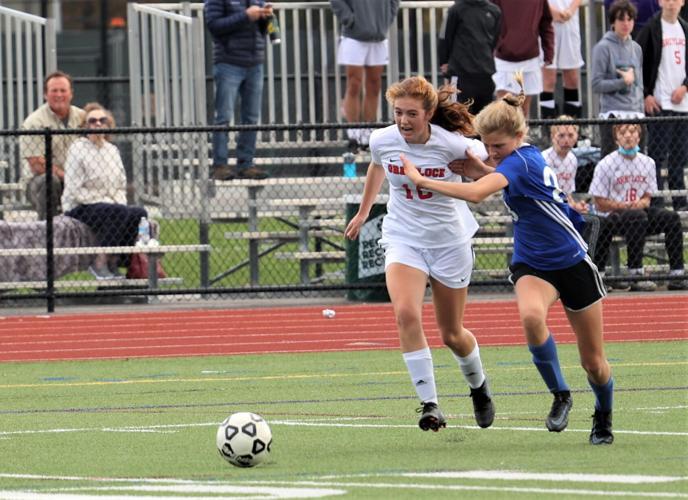 On Sunday afternoon, the Mount Greylock girls soccer team was defeated by Palmer, 2-1 in overtime, in the Western Massachusetts Class C championship game.

For a full gallery or to purchase photos from this game, click here.

Mount Greylock's Lily McDermott tracks down a through ball.

Mount Greylock goalkeeper Mai O'Connor leaps up to make a save.

Mount Greylock's Maire Scanlon shields the ball away from a Palmer defender.

That was when Palmer star Madalyn Theriault finally broke through Greylock’s veteran backline and a freshman keeper who had, as Mounties coach Tom Ostheimer put it “put a spell on Theriault.” Theriault scored the game-winner for Palmer, leaving the Mounties to try and pick up the pieces this week as they await the MIAA state tournament seeding.

“It’s encouraging how we’ve hung together as a team. We have improved pretty dramatically throughout the season. Just looking at the Palmer games; 6-2, 4-2 and now 2-1 in OT,” Ostheimer said. “That’s a lot of progress against a really good team.”

That family mindset is far from lost on his players.

“Right now we’re obviously a little down, but I think it will fuel us for states. I’m really excited to get back out there, especially with this team,” said senior captain Livia Morales. “I was telling my coaches, my five years on the team, this has been my favorite team to plan on. Everyone has been really passionate.”

“It’s the best team I’ve ever been a part of,” added fellow senior captain Zoe Armet. “The energy we have out there, we’re a very close-knit group this year and we’ve been having a lot of fun. I’m really grateful for this to be my last season with this team.”

As they alluded to, Greylock is not finished after the loss. The Mounties await their MIAA state tournament seeding this week.

Fairfield University commit Madalyn Theriault scored twice, both on assists from Charlotte Theriault. Her goals came about 80 minutes apart, as the sisters connected in the seventh minute of the game to put the No. 2 Mounties in an early hole. After that, the Greylock defense, along with rookie netminder Mai O’Connor, held up.

Mai O'Connor stops Theriault 1 on 1 a minute into OT. Freshman has impressed for Greylock, and look at that vertical.5:41 left and we've got a timeout. pic.twitter.com/XOYz6AdQbK

The Panthers had nine corner kicks in the game and came up empty nine times. Seniors Mackenzie Sheehy and Armet, and juniors Molly Sullivan and Emma Newberry, among others, built a wall around O’Connor and were constantly within arm’s reach of the Palmer striker. Freshman Maire Scanlon helped on a big stop early on too, before being moved up the field to aid on Ostheimer’s attack.

“Our goal was to make sure someone was always on No. 12,” said Armet. “Granted it didn’t entirely work out in the end, I think we did our best and we did a good job considering her first goal was scored pretty early on and we managed to keep them at bay until the end of OT.”

Playing without key midfielder Jane Skavlem, the Mounties couldn’t get much offensive push over the opening 40 minutes. Palmer’s defense stayed in the jersey of attacker Lily McDermott, and couple set pieces by Morales missed wide or high.

Overall, the Greylock faithful held their collective breath as Theriault leveled blow after blow. Near the end of the first half, she swallowed up an attempted clear by Sheehy and turned the tables too quickly, passing by the Mounties captain. She made a move to make Sullivan miss and drew O’Connor out before slamming a shot off the near post. Another Panther collected the rebound and hit the opposite post. Somehow, the Mounties made it to halftime down just the one goal.

That gave Ostheimer the confidence and opportunity to start forcing the issue offensively a bit more. Scanlon moved up and notched a pair of shots on goal, and the Mounties started throwing their athletes at the Palmer defense. McDermott headed a corner kick wide in the 49th minute, and five minutes after that the Mounties struck gold.

Greylock breaks through with the equalizer. Morales connects with Lucy McWeeny for the header off a free kick. 1-1, 25min to go. pic.twitter.com/ibgliFzsfo

Sullivan scooped a ball into the box and McDermott drew another whistle. The free kick was set up just to the attacking left of the goalie’s box, and Morales lined up to take another stab. She arched her centering pass nicely, and this time it found the head of Lucy McWeeny. Or, rather, McWeeny navigated herself under the lollipop, and redirected it with a nudge off the back of her head and into the back of Palmer’s net.

“Recently we’ve been definitely able to get into our rhythm and when we come out in the second half we really try to control the game, working to take over. When it was 1-0 at the half, we just thought we could do this, get out there and score,” said Morales. “I was looking for Zoe, but they were both there and Lucy got it. I was really proud of her.”

The equalizer came with 25:26 left in regulation.

“I thought it was a back-and-forth game, but we got the better of play in the second half, putting Maire up there with Lily made it tough on them, they’re both speedsters who are physical. We shift to the 4-4-2 and we feel pretty confident,” said Ostheimer. “We kept with it even after tying it up, hoping we could get the game-winner, and we were close. Right there in the OT, we had a good opportunity with Lily on a through ball and it was a 50-50 with the keeper.”

Things were frantic in the final minutes of the second half. Scanlon and McDermott both had shots saved, and Lucy Igoe sent a try wide from a tough angle. At the other end, a quick throw-in saw Theriault get a bead on the net, before Newberry came slamming in from the weak side to clear the ball with 2:30 remaining. O’Connor finished with 12 saves in the game.

“She’s young and not the tallest, but she makes up for it with her athletic ability. She’s a huge presence out there. We were really lucky to have her out there, especially today with the amount of saves that she had. It was incredible,” said Armet. “She’s improved over the season coming out to the ball and communicating with us. We’ve been a unit.”

Both sides had chances to take the title in overtime. Palmer had more than a couple, but O’Connor was in the zone. She stopped Theriault one-on-one twice, and made a strong move on another run that Sheehy stopped with a quick slide tackle. The Mounties also withstood two corner kicks.

“She just was going to keep going back to the well and coming up empty with these miracle saves,” said Ostheimer. “[O’Connor is] incredibly quick with her hands and her feet, she plays angles great, and on top of that she has a really strong defense. That back four gave Madalyn Theriault all she could deal with, and when she did get a little opening, Mai was there to make one incredible save after another.”

With 2:30 left, Greylock’s opportunity came with a through ball that McDermott latched onto behind the defense. It was just a smidgen too early, though, and the Palmer keeper came out of her next to slide through the oncoming attempt.

Not long after, Theriault got possession in tight, shook two defenders and finally managed to get one by O’Connor for the winner.