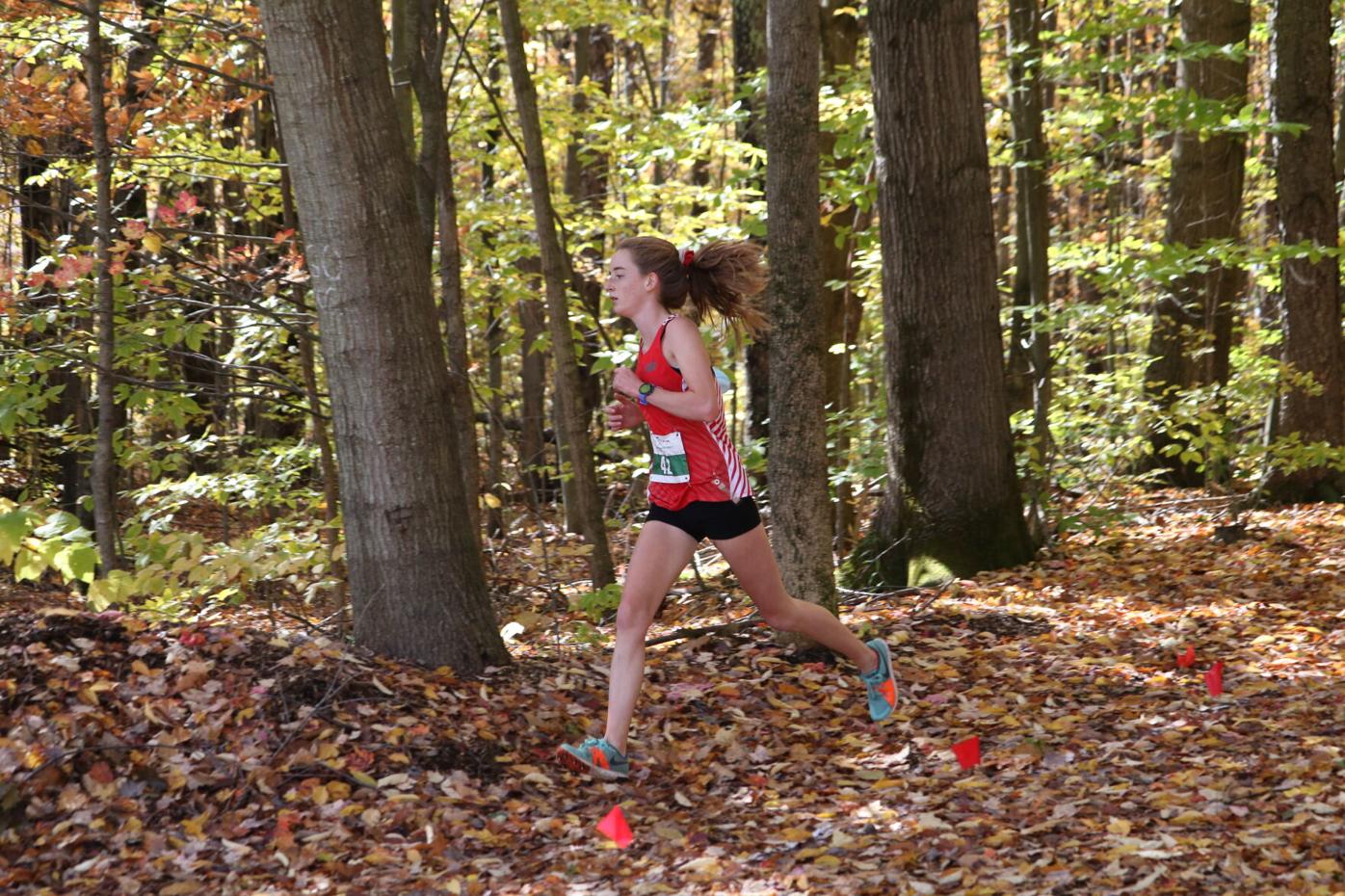 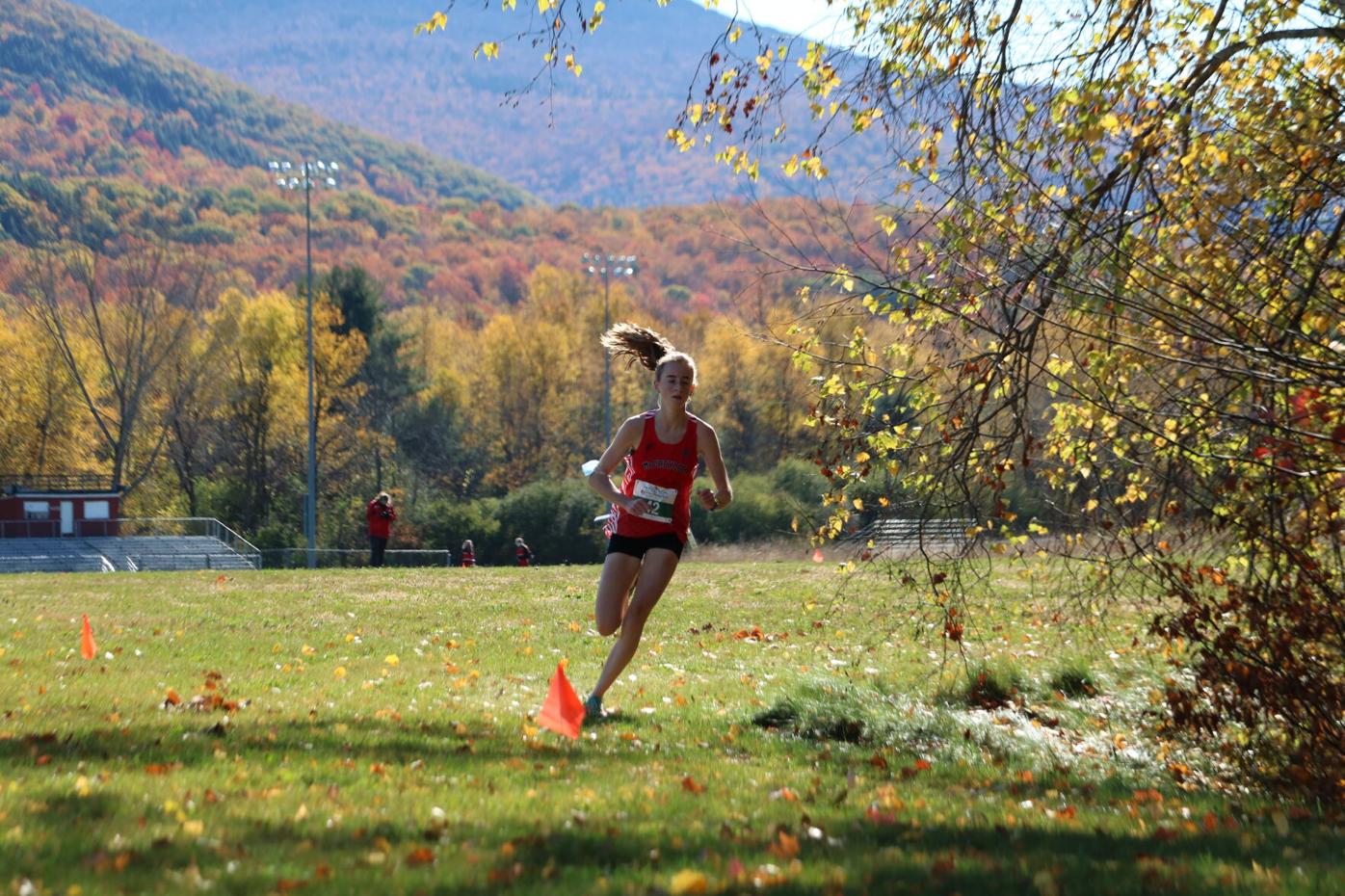 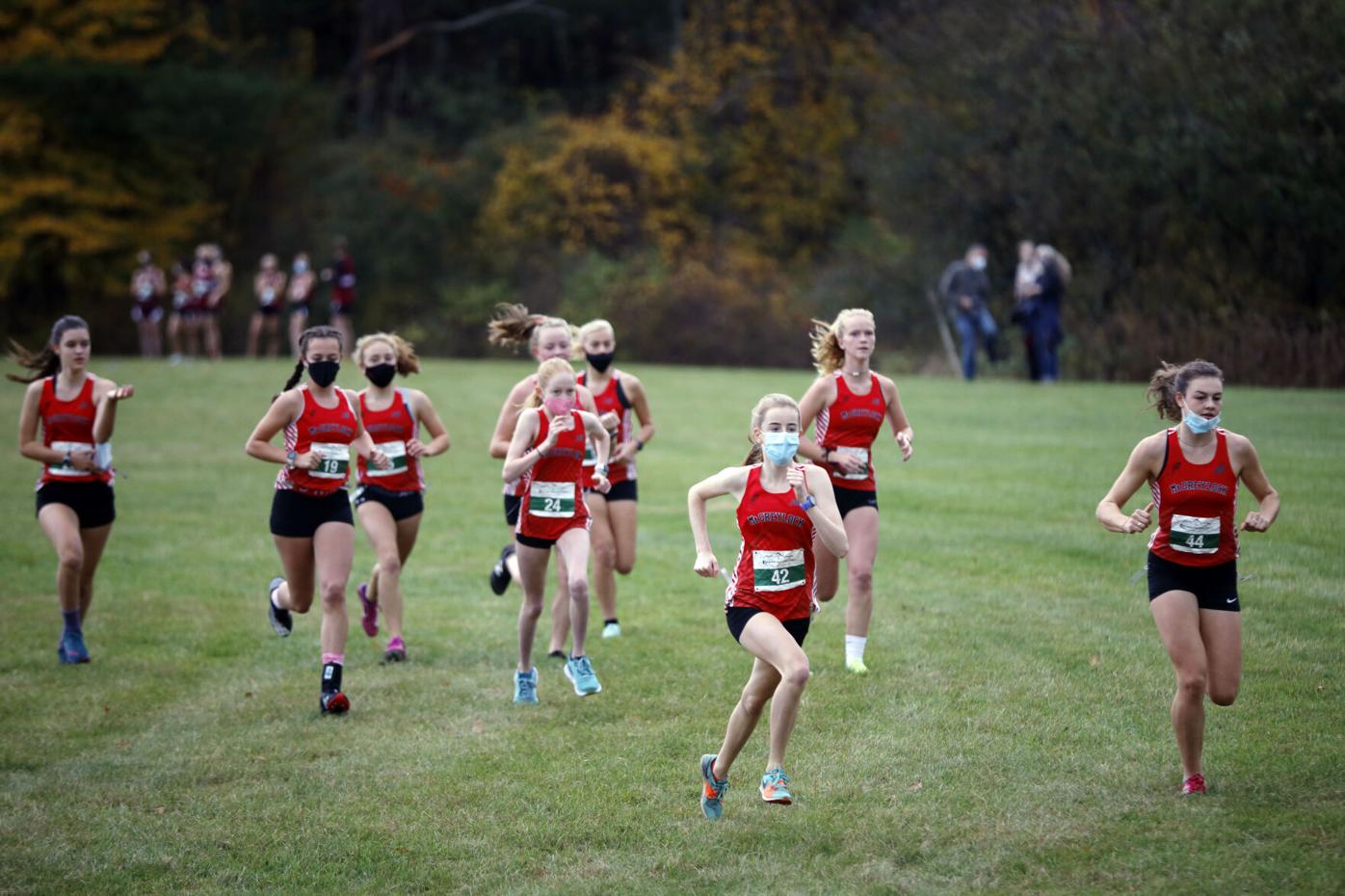 STEPHANIE ZOLLSHAN — THE BERKSHIRE EAGLE Kate Swann and runners from the Mount Greylock girls cross-country team race at Monument Mountain this fall. The Mounties finished their year unbeaten, and Swann has qualified for the Nike Cross Virtual Championship. 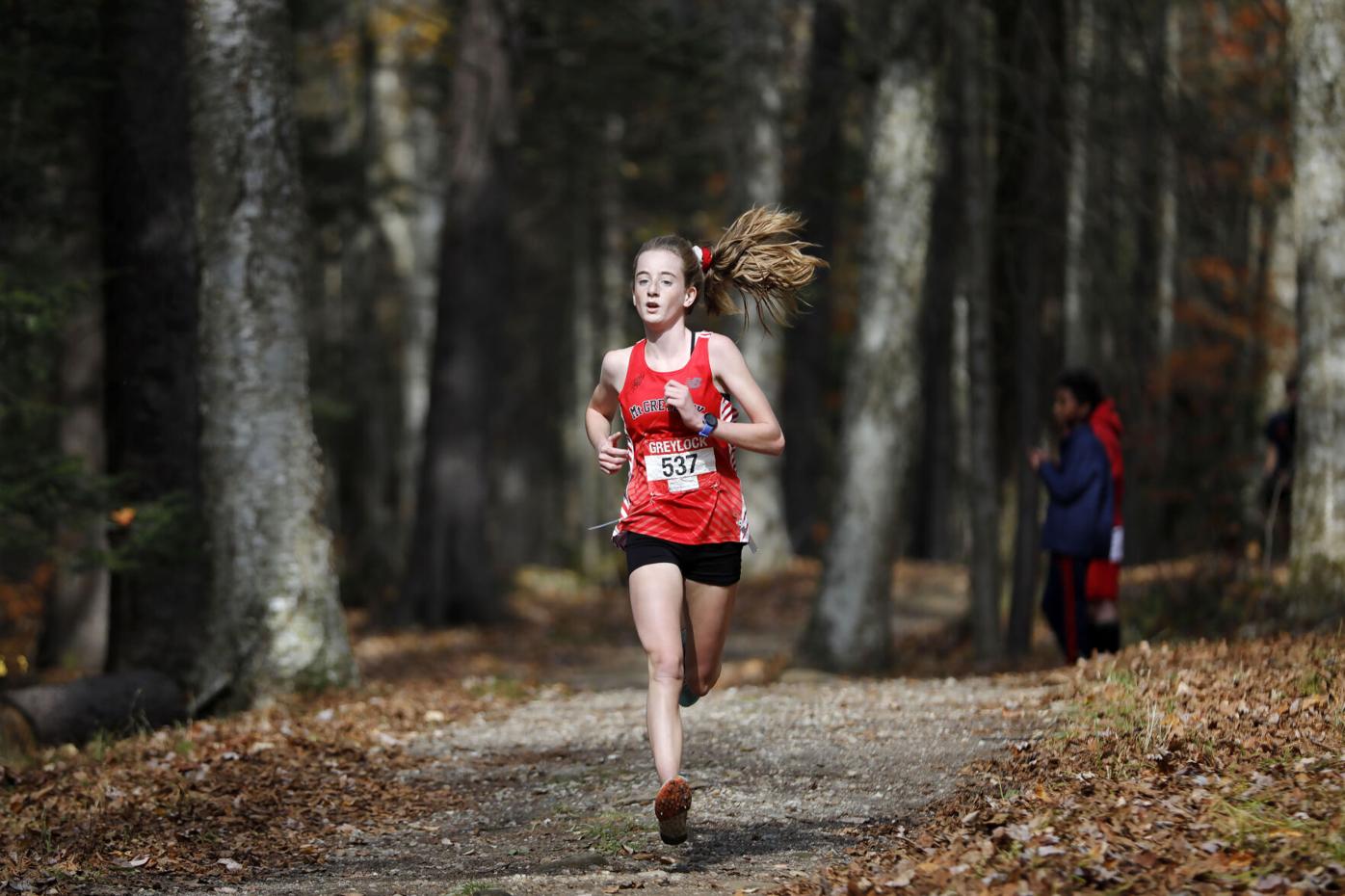 Kate Swann has qualified for the Nike Cross Virtual Championships, while helping guide the Mount Greylock girls through an undefeated fall season.

STEPHANIE ZOLLSHAN — THE BERKSHIRE EAGLE Kate Swann and runners from the Mount Greylock girls cross-country team race at Monument Mountain this fall. The Mounties finished their year unbeaten, and Swann has qualified for the Nike Cross Virtual Championship.

Kate Swann has qualified for the Nike Cross Virtual Championships, while helping guide the Mount Greylock girls through an undefeated fall season.

WILLIAMSTOWN — Last Saturday, Mount Greylock junior Kate Swann didn’t just help her team to an undefeated fall by capping her own perfect season with a sixth consecutive individual victory. She did so in such dominant fashion that no one else crossed the finish line for more than a minute after her.

And on top of that, Swann has now qualified for the Nike Cross Virtual Championships. After finishing as a top-five individual in the Northeast Regional, she will compete in the virtual event some time between Nov. 16-24 at her own location locally.

“With the weather recently, and how strange everything has been, it’s hard to believe it’s the end of the season,” Swann said on Wednesday. “I’m so glad we were able to have a season, and this is a really fun way to end it.”

Swann’s year began on Oct. 3 in the season-opener at home. She posted a time of 21 minutes, 3.82 seconds, winning that race by 26 seconds over the next top finisher. A week later at Mount Everett, she won in 21:12.06, separating from the pack by 38 seconds. Back home on Oct. 17, she shaved 30 seconds off her own time to finish in 20:33.57, 46 seconds faster than the runner-up. That separation continued the following Saturday at Monument Mountain, where no one was within a full minute of her 19:23.17. On a frigid Halloween morning, she punished her home course once more to the tune of a 20:34.85, 56 seconds better than any other girl.

The coup de grace came at Wahconah last weekend, when her 19:36.87 performance went untouched for 71 seconds.

“I think we’re all at the point where we just admire Kate,” Greylock senior Jackie Wells, who was second in a bunch of those races this fall, said after a recent meet. “We just admire how hard she works and every day she comes to practice and she’s cheery, this ray of sunshine, who makes all of our lives better. On the course, she’s just fierce. It’s amazing to watch her.”

Swann took part in the Nike qualifier alongside Wahconah’s Haley Crosier and some of her Mounties teammates under the unaffiliated team name Deer Ridge Runners. They raced on a flat loop course near The Spruces park in Williamstown. Behind Swann, Wells and others, Deer Ridge placed fourth overall in the Northeast Regional. Her qualifying time in the 5K is 18:47.00.

“I hadn’t run a lot of sub-19s this year, so I was happy. It was a really fun, fast thing to do. Some of the boys got to come race with us, and having Haley Crosier there was great,” said Swann. “I’m leaning toward going back there again for the championship, especially because I know it now.”

The Nike event comes just about a full year after Swann stormed through the MIAA postseason as a sophomore. She was runner-up at the Western Mass. D-II championships last fall at Northfield Mountain. The victor, Pope Francis’ Emily Boutin, graduated in the spring. A week later, in Gardner at the MIAA All-State meet, Swann was third overall.

“It feels weird to comment, because we all see her as an equal, not like I’m the elder looking on my mentee,” joked Hazel Scullin, another Greylock senior, after a meet this fall. “We’re so proud of Kate. Even coach [Hilary] Greene I think admits to taking Kate for granted, because she can just go out there and do her stuff and keep it all under control. We all have so much respect for what she can do.”

Coach Greene was an assistant to Larry Bell in 2017 when Swann was the state champion Mounties’ seventh varsity runner at the Massachusetts meet as an eighth grader. She’s seen the drive and improvement over the past three years first hand.

“She’s running great, and she loves to run, which is special just in itself,” Greene said this fall. “I worry about her only in that we don’t really have anyone for her to train with. Jackie and the rest of the pack are very close, but ideally you’re training with someone who is a little quicker. In the past we’ve done workouts with the boys, but we couldn’t do that this year.”

For her part, Swann credits that beginning and the acceptance of those older girls for giving her to motivation to get where she is now.

“I just think I’m much more mentally strong now,” she said. “I was in the top seven then, and I just knew I wanted to stay there. I remember that meet, feeling really discouraged during it, even though we won. The older girls showed me what it took.”

Swann will take over leadership of the now-storied program next fall from girls like Scullin and Wells.

“I think it’s so amazing, this team. We’re all such good friends. It doesn’t feel like Jackie and Hazel are any older, we’re just close. I’m excited to keep that going, make more friends. I want to keep it a positive environment,” Swann continued, “because that’s what it has always been.”