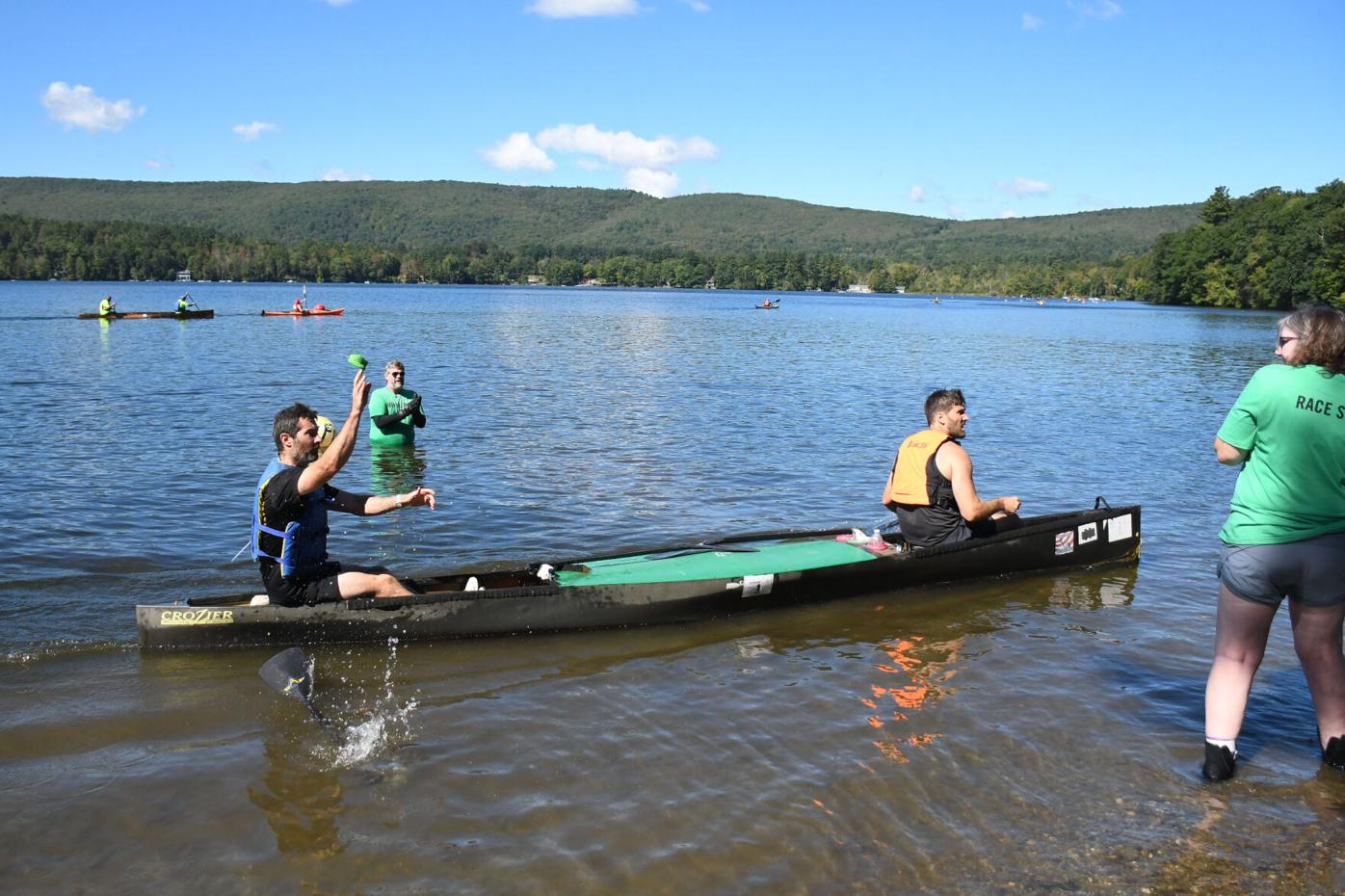 Seen from the shore of Camp Mah-Kee-Nac, Allen Heights Veterinary paddlers Tom Keefe and Ben Pigott throw their wristband to Steve Monsulick for the final leg of The Josh Billings RunAground. 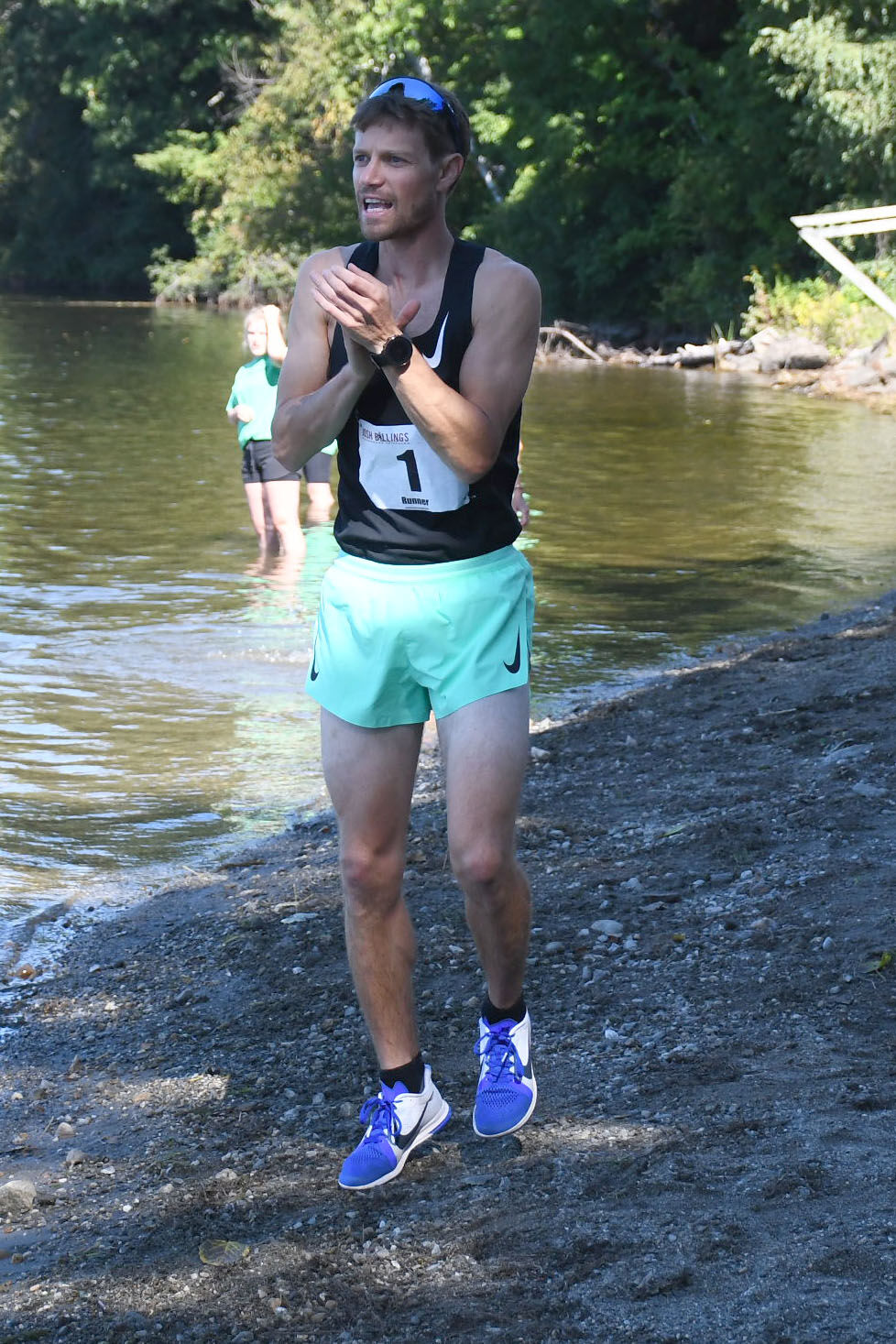 Runner Steve Monsulick cheers on his teammates as he waits on the shore of Camp Mah-Kee-Nac. 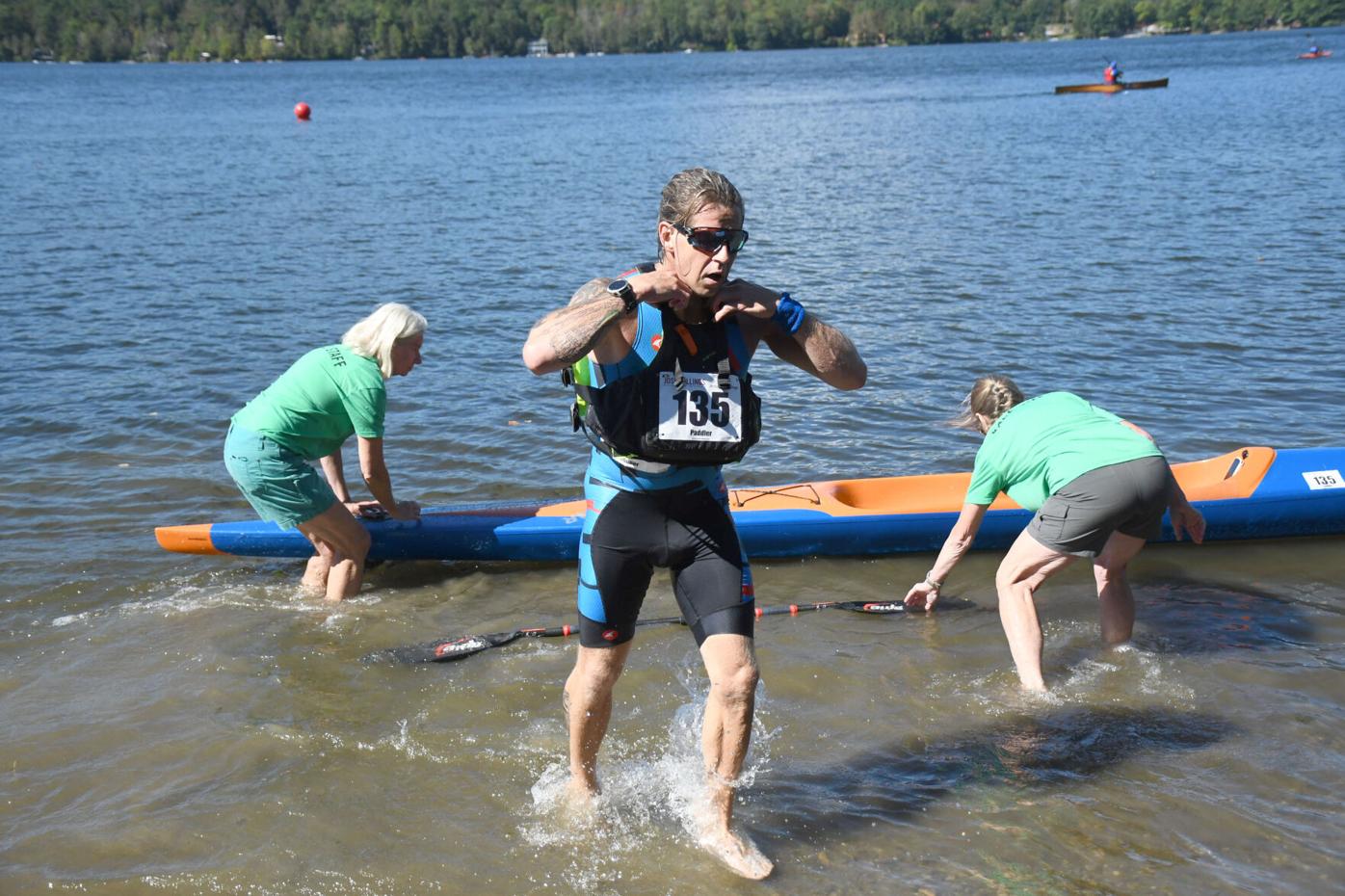 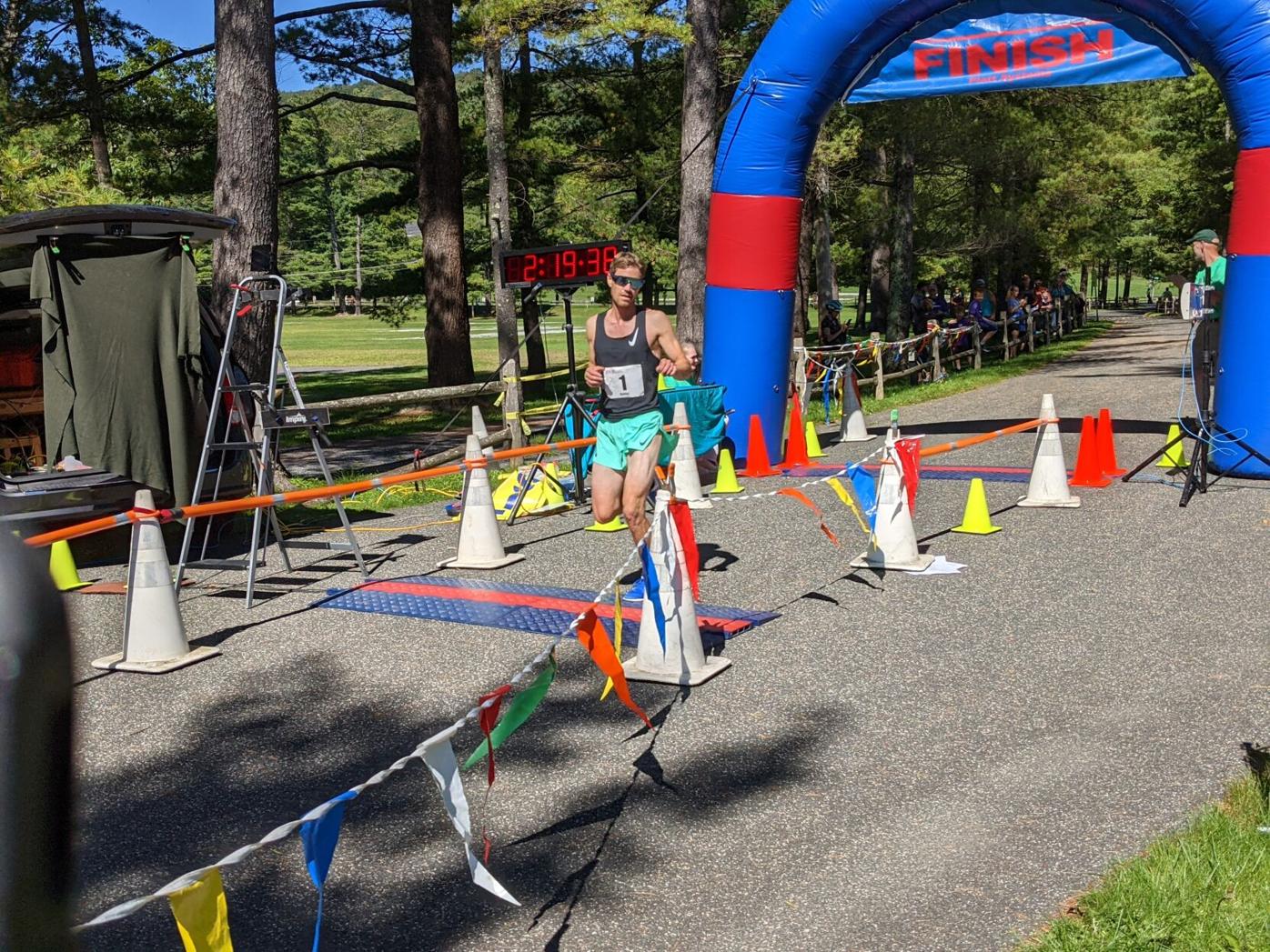 Seen from the shore of Camp Mah-Kee-Nac, Allen Heights Veterinary paddlers Tom Keefe and Ben Pigott throw their wristband to Steve Monsulick for the final leg of The Josh Billings RunAground.

Runner Steve Monsulick cheers on his teammates as he waits on the shore of Camp Mah-Kee-Nac.

LENOX — On the day the Great Josh Billings RunAground made a triumphant return to the Berkshire County sports scene, it was only fitting that it would be a record-setting day.

In the 45th edition of the triathlon, Allen Heights Veterinary foursome might have come up a bit short in an effort to break a record they set back in 2017, but cyclist Josh Lipka, paddlers Tom Keefe and Ben Pigott, and runner Steve Monsulick, became the first team to win five consecutive Josh titles with the same four racers.

“It feels nice. It’s fun. It’s a great race,” Keefe said at the finish line after Monsulick crossed into Tanglewood. “This is five years in a row that we have been able to pull it off, so that’s a record. No one has won it five times in a row with the same team.”

The Allen Heights team crossed the finish line first in 2 hours, 19 minutes and 38 seconds. They had been gunning for their own record of 2:15:28, which was set back in 2017.

It was also an historic day to be an Ironman. Gloucester’s Janda Ricci-Munn won the Ironman competition in 2:30:04. His time broke the course record set by Kent Lemme in 2017. That time was 2:31:01.

Not only did Ricci-Munn set a new time, but his second overall finish was the highest finish by an Ironman and he was one of three Ironmen to finish in the Top 10. Ben Lawry was sixth and Mark Trahan was 10th. It was the first time ever that three Ironmen finished in the top 10 overall.

“This is a great course. It’s an honest course. As you can see, I had to work,” Ricci-Munn said. “I was emotional after finishing because it’s a tough one. It was awesome. The people here are so friendly. It was a great time.”

The Josh Billings RunAground is made up of three legs. Cyclists ride 27 miles from Great Barrington through southern Berkshire County to the Stockbridge Bowl boat ramp in Lenox. Then paddlers in canoes or kayaks or on paddleboards take off for five miles around the Stockbridge Bowl. The RunAground is wrapped up by a six-mile run from Camp Mah-Kee-Nac to the main gate at Tanglewood.

RunAground race director Patty Spector had said that, due to COVID-19 issues, the race committee capped entries at 300. As of late Sunday afternoon, 273 entries had crossed the finish line.

Instead of the traditional Josh “Bash,” Tanglewood was open to pick up competitors. Awards were handed out at the Lenox Community Center.

The race itself began under sunny skies and mild temperatures, with very little wind. The cyclists started at the Price Chopper Plaza on Route 7, and by the time the competitors hit Alford, Lipka was riding alone.

“We were just kind of cruising through downtown. Then you put your head down on the first hill and try to get a PR every time,” Lipka said, “and take stock when you get to the top. I go a little faster on the downhill, so if I have little bit of a gap, it’s tough for people to close. I gain even more on the downhill than the uphill.”

Once Lipka got away from the majority of the riders, a small group that usually is near the front, also decided not to go with him.

“We let him go this year,” Piper-Vallillo said after handing off to his paddlers at the boat ramp in Stockbridge. “What do they say, trying the same thing a million times and expecting a different outcome. We decided to let him do his thing. We knew he was going for the record, so we just let him do his thing. I was just happy to create a little separation. Usually, it’s a big group behind Josh. I was hoping to limit our losses this year.”

Piper-Vallillo was the second rider to reach the ramp.

“We were thinking this year, we’re kind of at the peak of our age and experience and as fit as we’re going to be,” Lipka said, when asked about possibly setting a record. “From Stockbridge to the finish, there was a headwind. When you’re going slightly uphill for the last 10 minutes into a headwind, it sucks you back.”

Keefe and Pigott got into the water first and maintained that throughout their five miles in the Bowl. Being first means you don’t have to worry as much about choppy water from other competitors. They did run into some waves and some wind as they traversed the Bowl on the second lap.

“It was nice down at the island and then the far part by the Beechwood area was very windy,” Keefe said. “It was hard back there. There was a headwind going down toward Mah-Kee-Nac. For some reason, there was a northwest wind so it was a headwind going past Tanglewood beach. A lot of headwinds and a lot of waves on the far side.”

Both Keefe and Pigott knew as they closed in on the transfer station at Camp Mah-Kee-Nac, that the time record was not going to happen. So the key was to paddle cleanly and get to the transfer as quickly and as safely as possible.

The handoff to Monsulick was clean, and the fourth member of that veteran team was all alone from Mahkeenak Road to Interlaken Crossing Road, and then to Route 183 on into Tanglewood.

“I was looking at my watch. I kind of had an idea when they would hand off to me,” he said. “They were a little bit behind that. I went out as hard as I could, and that kind of backfired a little bit in the second half of the run. It was kind of what I had to do anyway.

“There was no real risk to it. They gave me such a big lead.”

And with it another championship.

Sunday afternoon, Steve Monsulick picked up another championship mug from the Josh Billings RunAground. This morning, he’ll get a new office t…