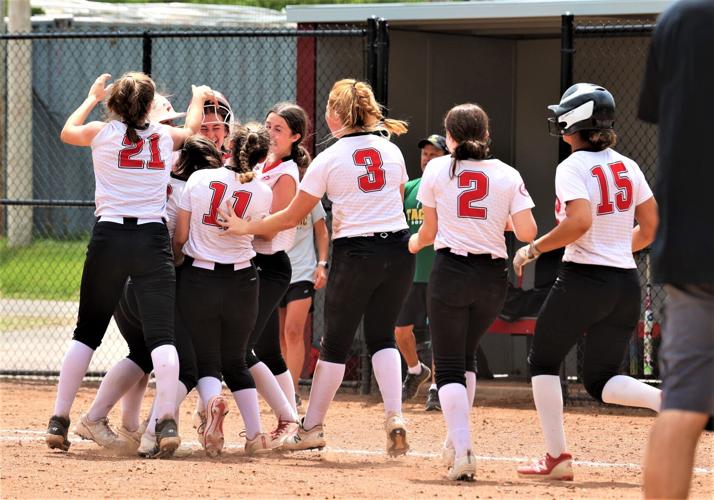 Mount Greylock players mob AJ Pelkey after she drove in the game-winning run on Sunday against Taconic. 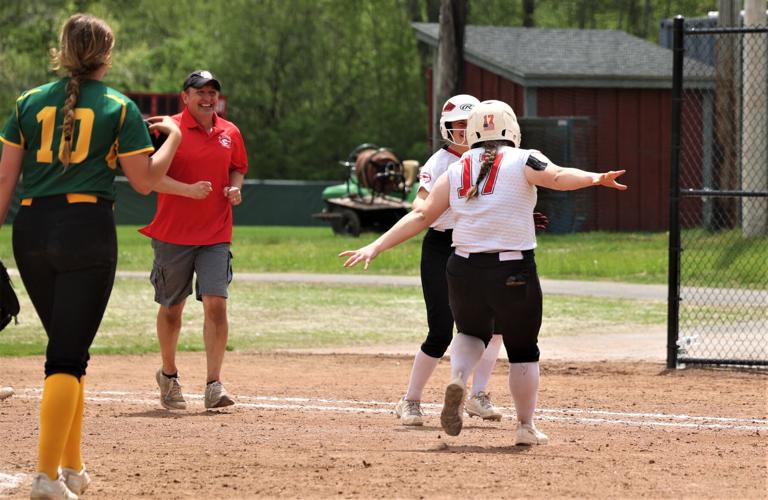 Mount Greylock's Brodi Rosier races to embrace AJ Pelkey after they combined to drive in the tying and winning runs in the bottom of the seventh on Sunday in a walk-off win over Taconic. 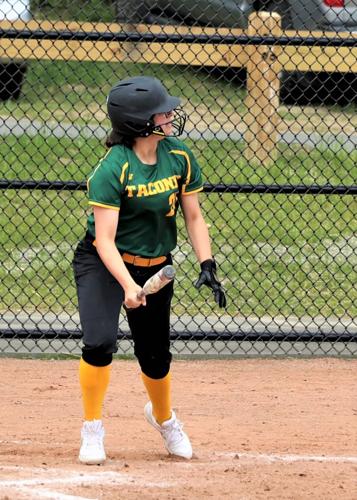 Mount Greylock players mob AJ Pelkey after she drove in the game-winning run on Sunday against Taconic.

Mount Greylock's Brodi Rosier races to embrace AJ Pelkey after they combined to drive in the tying and winning runs in the bottom of the seventh on Sunday in a walk-off win over Taconic.

WILLIAMSTOWN — The Mounties were on life support, down to their final out and in danger of blowing a home game in which they held a five-run lead.

Then, a handful of paper cuts added up and Mount Greylock spoiled Taconic’s comeback storyline with a 9-8 walk-off victory against its Franklin West rival.

Taconic reliever Anna Bongini and her defense had retired nine straight while the Thunder battled back to take an 8-7 lead. With two down in the bottom of the seventh, Mount Greylock’s Abby Whitley and Kelsey McHaffie singled through the left side of the infield to put the winning run on base. A pitch then got away from Bongini and hit No. 9 batter Kate Shelsy to load the bases and turn over the Mounties’ order.

They really start themselves,” said Greylock coach Mark Pierson. “I’ve got good leadership from the captains and they said we’re not going to quit, not going to die. We’re going to make a lot of noise. Once we got one on, it snowballed from there.”

Leadoff hitter Brodi Rosier stepped into the box and pushed an 0-for-4 day out of her head. She laced a ball that forced Taconic shortstop Cheyanne Goddard to range right and it ricocheted off her knee during a sliding attempt. Whitley came home with the game-tying run.

“I always tell my girls, ‘60 feet, get out of your head. Everything else is in the past’,” said the senior catcher. “I knew when I went up there I had to help win it for my girls. Do what I needed to do. At the plate, it’s just confidence. Hard ground ball, get on base.”

Up next, AJ Pelkey had her own chance to shake an 0-for-4 outing. She made glancing contact and Bongini had to track back toward third base for the flare. She got a glove on it, but couldn’t haul it in. McHaffie scored and Rosier bolted for Pelkey at first.

“We were really nervous. We knew they wanted to beat us really bad,” said Rosier. “They’ve kind of had us for I don’t know how many years. But this is a really young team and we just wanted to win against one of our rivals.”

The storyline Sunday was written and rewritten multiple times.

Greylock had the strong opening act, getting home runs from Emma Newberry and Malia Koffi, and a three-run double from McHaffie in building a 7-2 lead through four innings. Taconic coach Jaclyn Candelet brought in Bongini to relieve starter Goddard to start the fourth inning. After two quick outs, Newberry doubled and scored on a single by Greylock pitcher Kami Sweet.

Sweet was left at first, though, when Brenna McNeice fielded a pop-up at second to end the inning. From there, Taconic’s defense collected 1-2-3 innings in the fifth and sixth and retired the first two batters in the seventh. Bongini struck out just one, as Taconic’s defense shined for a stretch.

While the visitors had Greylock in neutral, the Thunder’s offense started booming, and nobody boomed louder than Amelia Leasure.

Taconic scored two after McNeice’s RBI double in the third, and then plated five to tie the game in the fifth. Laynie Burke led off the fifth with a triple to the fence. She scored on an error, before McNeice reached on a fielder’s choice. Bongini followed with a single, and Leena Schettini reached on another error to load the bases.

Leasure took the first pitch she saw from Sweet and blasted it over the fence in left-center field. It was a game-tying grand slam for the Thunder right fielder.

Rosier was in the circle with an arm around Sweet while Taconic’s bench emptied to welcome in Leasure.

“Little pep talks in there,” she said. “She’s one of my best friends, and she’s our only pitcher, so just had to hype her up there and I knew we needed her throwing to get through it.”

In the sixth, Taconic got a leadoff single from Julia Pierce. She came around to score on yet another Greylock fielding miscue, putting the Thunder in front 8-7.

“We were rolling. Hard hit ball off Cheyenne’s knee, took a bad hop and gave them an extra chance. I thought Anna was going to get that one, hoping for free softball at that point,” said Candelet. “We’ve been battling all year and just haven’t gotten over that hump. We played a great game, clean game. Down 7-2, could’ve gave up and said we’re done today. But we battled right back, tied it up and took a lead. Couple things just didn’t go our way.”

On Sunday in Williamstown, Mount Greylock scored twice in the bottom of the seventh to walk off with a 9-8 win over Taconic.