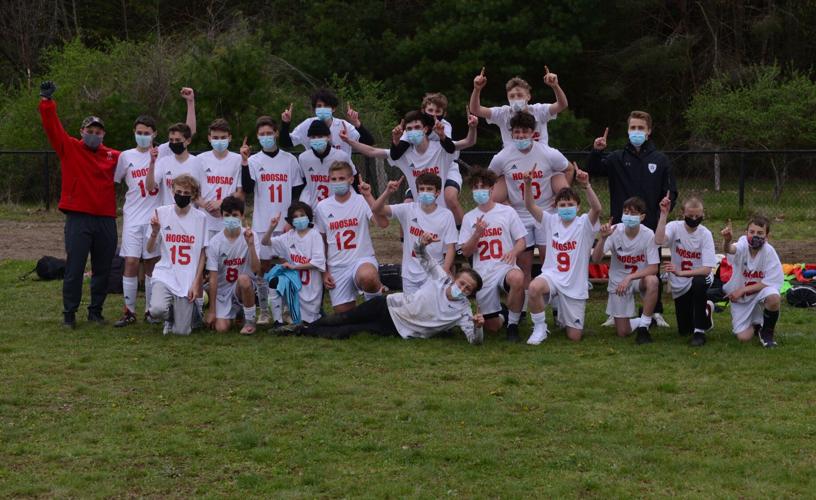 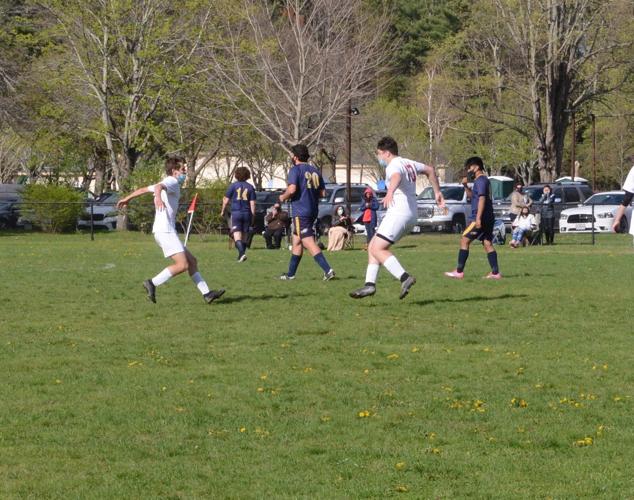 Isaac Herrmann and Jake Richardson run towards each other to celebrate following a goal in the second half of Hoosac Valley’s win over Mount Everett on Friday night. 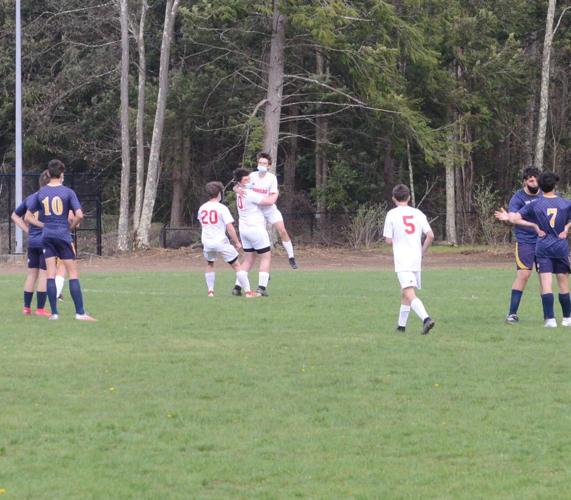 Jake Richardson and Isaac Herrmann following a goal by Richardson, created by Herrmann, during Hoosac Valley’s win over Mount Everett on Friday night. 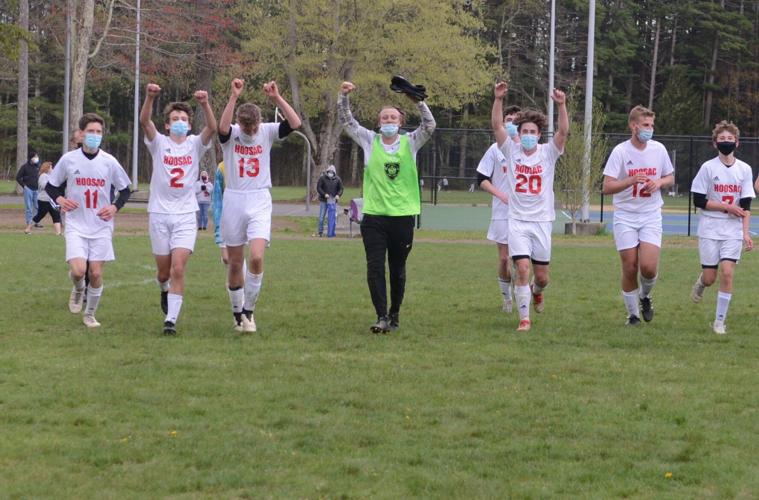 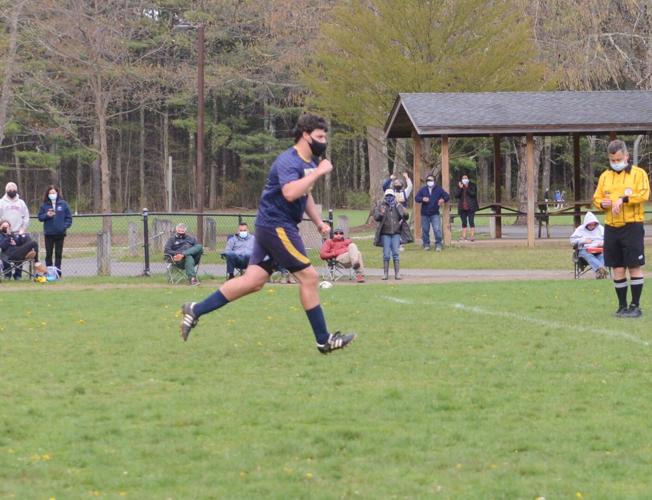 Mount Everett’s Jack Carpenter pumps his fist following a goal in the second half against Hoosac Valley on Friday.

Isaac Herrmann and Jake Richardson run towards each other to celebrate following a goal in the second half of Hoosac Valley’s win over Mount Everett on Friday night.

Jake Richardson and Isaac Herrmann following a goal by Richardson, created by Herrmann, during Hoosac Valley’s win over Mount Everett on Friday night.

Mount Everett’s Jack Carpenter pumps his fist following a goal in the second half against Hoosac Valley on Friday.

‘Canes leave it all in Sheffield

SHEFFIELD — Coach Pat Mahoney’s message to the Hurricanes was loud and clear with 40 minutes remaining in the Fall II Berkshire South championship game — empty the tank.

Sticking with the metaphors, not only did Jake Richardson empty the tank, but he was nearing the red line. The senior scored twice, leading Hoosac Valley’s charge to the throne, defeating Mount Everett 2-1 on Friday night.

“We wanted to give it everything we got and get the win,” Richardson said of the team’s effort. “We wanted to beat Everett because it seems like they have beaten us every time throughout the years.”

Mount Everett beat Hoosac Valley twice this season by a combined score of 3-1 and Richardson’s focus was to flip the script.

Hoosac’s offense was getting shots early and Isaac Herrmann’s downfield passing was a large reason why.

The junior’s through balls led to open looks and Richardson took advantage of a Herrmann dime 18 minutes into the game, giving Hoosac Valley a 1-0 lead.

“We didn’t get too many shots this game, but we put them in,” Richardson said. “We capitalized on opportunities and it gave us the win.”

In fact, the Eagles out-shot the Hurricanes 16-9, including a 6-5 difference in the first half.

Shortly after the intermission, a handball gave Richardson a shot to double Hoosac’s lead with a direct kick.

“[In that situation] look where [Everett goalie Michael Devoti] is looking, give him the eyes to one side and put it in the other,” Richardson said. “He read it well, but it was a good shot and went in.”

Despite plenty of opportunities, Hoosac Valley made life difficult for the Eagle offense. Whenever Mount Everett tried to push the ball up the sideline to Alek Zdziarski, Hoosac’s defense pinned him in the corner and closed off passing lanes.

On top of that, the wind made passing difficult — too deep and the opposing keeper can squash the threat and if it was too short, the Eagles were forced to maneuver through a horde of defenders.

“We needed to focus on playing short and getting [get-and-go passes],” Everett senior Jack Carpenter said. “We ended up getting to them and our offense looked a lot better, but you didn’t know what was going to happen when the ball was in the air. You just had to try to play it smart and get it on the ground.”

It wouldn’t be a championship bout without a bit of drama and Carpenter delivered with a direct kick of his own, cutting Hoosac’s lead to 2-1 with nine minutes remaining.

“[Offensively], we just had to play our game and control possessions,” Carpenter said. “We didn’t start doing that until later in the second half and that is how we found ourselves in a 2-0 hole.”

Eight minutes of hysteria ensued as the Eagles searched for the game-tying goal. However, Hoosac keeper Lucas Waterman was there to make two of his six saves in the closing minutes. Even when he wasn’t there, though, defenders lunged in front of shots to preserve the lead.

While winners and losers both left Mount Everett High School, it was a refreshing return after a year without sports.

“It has been awesome to finally get a season where we got a lot of games in after not having soccer in the fall,” Carpenter said.

The senior added that for everything that happened throughout the Fall II season, the Eagles never stopped working.

Meanwhile, Hoosac closed the year by celebrating a championship for the little guys.

“Coming in to this season we knew we were the underdogs and had to put in the work — so we did,” Richardson said. “We’re No. 1 in the south and [this team] has heart.”

11 Berkshire County high school soccer teams received a bit of live action as they prepare for the regular season to begin. Teams from Mount Greylock, Pittsfield, Taconic, Lenox, Wahconah and Hoosac Valley all participated in the 2021 Berkshire Kick-Off Classic at Berkshire Community College on Friday night.

Tyler Norcross was the difference for Hoosac Valley on Thursday against Taconic. The Hurricanes capitalized on strong corner kicks from the senior and ended a busy stretch with a win at Berkshire Community College.

Westfield Tech scored twice in the final 15 minutes of action, upending Hoosac Valley in a 2-1 win in Cheshire.