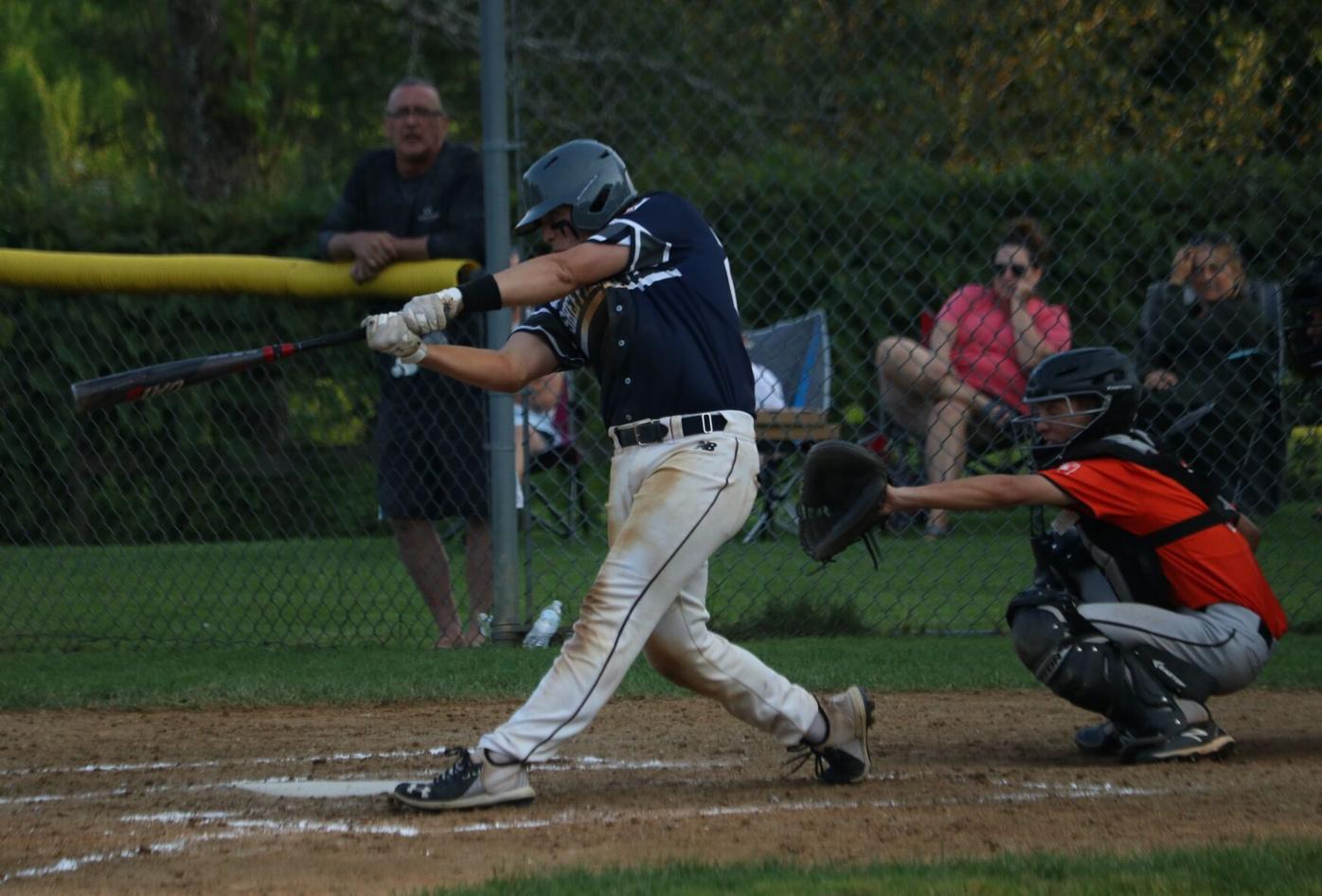 Cole Bissaillon was 4 for 4 with a double and two runs scored in Sheffield’s 5-2 win over Belchertown on Monday. 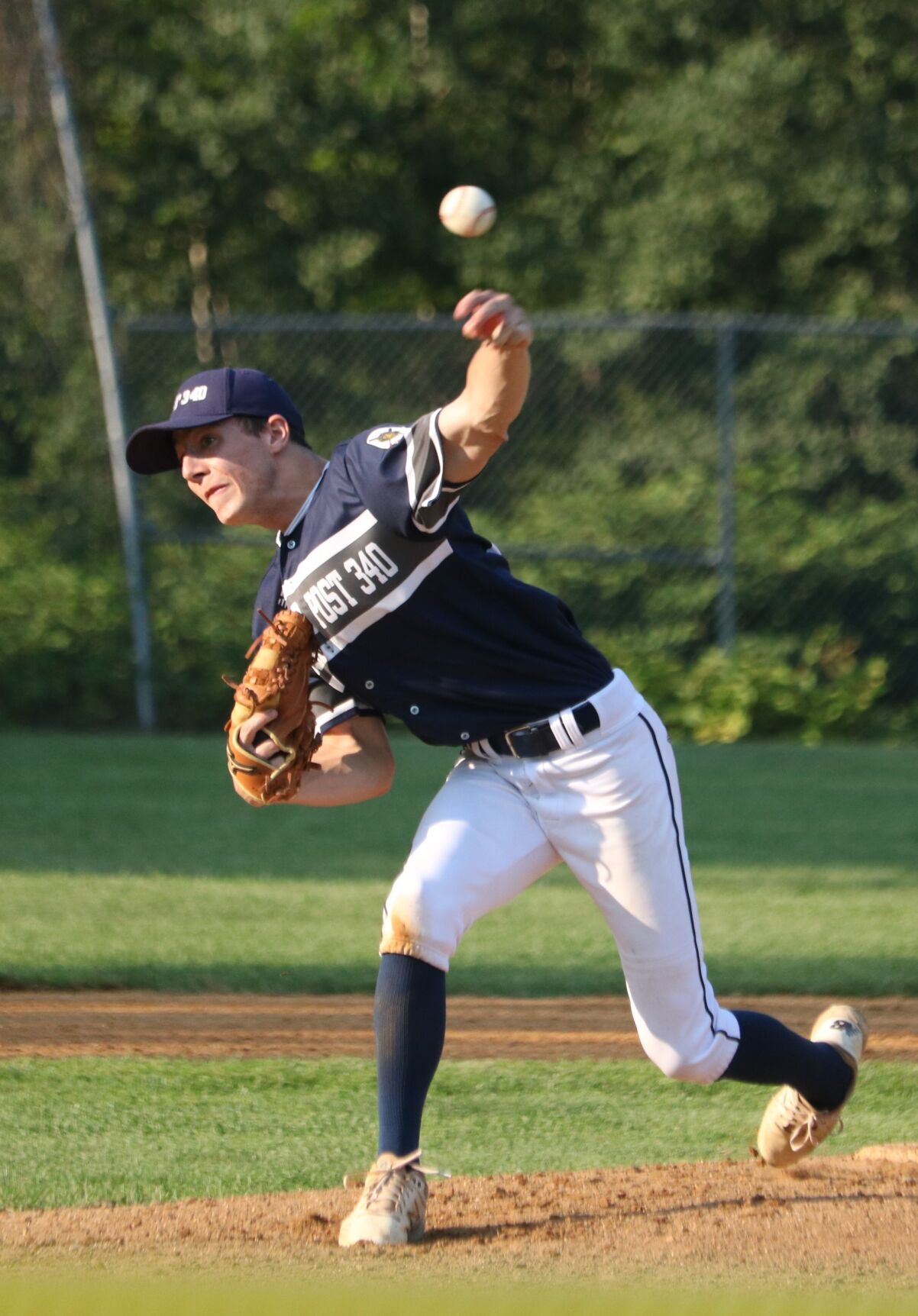 Starting pitcher Cole Zucco delivers on a pitch for Sheffield

Cole Bissaillon was 4 for 4 with a double and two runs scored in Sheffield’s 5-2 win over Belchertown on Monday.

Starting pitcher Cole Zucco delivers on a pitch for Sheffield

LENOX — It’s been a tough summer to stay in rhythm, and the Sheffield Junior Legion baseball team hasn’t had many sustained opportunities to be together on the ballfield.

So, with some recent clear weather and a partially dried out War Memorial Field, it was no surprise Post 340 hit the ground running in a 5-2 home win over Belchertown on Monday.

Starting pitcher Cole Zucco set Belchertown Post 239 down in order in the top of the first, and the first three Post 340 batters to the plate in the home half all reached base and scored.

Marco Buffoni opened the proceedings with a walk and stole second, before Brendan Armstrong singled him home with a drive to right field. He then stole second as well and was singled to third by Cole Bissaillon.

Armstrong scored on a passed ball, but Max Shepardson kept the rally going with a double that the right fielder lost in the sun, plating Bissaillon for the 3-0 lead.

Zucco made that advantage stick into the third inning, but walked three straight batters with one away, leading coach Brian Wade to go to his bullpen.

Owen Wade came off the bench equally eager to throw some balls and swing the bat. Despite the first batter he faced lofting a sacrifice fly to draw Post 239 within 3-2, Wade retired five straight and seven of the eight batters he faced.

With the postseason starting later this week, the Sheffield coach was mindful of pitch counts, and Owen Wade’s night was done after 30 pitches. The only blemish was a hit batter to start the fifth. Reliever Mike Naventi made sure to leave that runner stranded on third, punching out Belchertown’s No. 4 hitter with runners on the corners and his team up 4-2.

“All the rainouts and all that stuff. Just tough getting into the flow of the season,” said coach Wade. “The past couple of days have been decent weather, more consistent games and the kids have been putting the bats on the ball better, pitching better.

“Just wanted to get each of my guys a little bit of pitching. They haven’t had that chance lately. Bit of a bullpen, and we’ll go from there.”

Owen Wade subbed in at the plate as well, and took full advantage of his swings, lacing an RBI double to center field that scored Shepardson, and then singling during a one-run fifth inning as well.

Naventi closed out the contest, going 2 1/3 scoreless innings to match Wade. Naventi struck out three, stranded runners on second and third in the sixth and set Belchertown down in order in the seventh.

“It starts with our coaching staff. They’ve done a great job keeping everyone eligible so we’re good to go for the playoffs,” said Bissaillon, the team’s catcher. “We got two aces with Naventi and Owen.

“Mike just really pumps the fastball by guys, he’s got great movement on the fastball. Owen is more of an off-speed kind of guy.”

Shepardson, who will also figure into the postseason pitching rotation, doubled twice and finished with an RBI and a run scored, while Bissaillon was 4 for 4 with a double and two runs scored. He doubled to lead off the fifth, hitting a ball to the base of the fence in left-center field, before scoring on a wild pitch to make it 5-2. Sheffield had 10 hits in the game, four of them doubles.

“It’s been tough to get these games in with all the rainouts. We were right off high school season, so nobody was fresh either,” said Bissaillon, who catches for Monument Mountain. “Arms a bit sore, but summer ball is all about having fun and this has been a lot of fun.”

Post 340 wraps its regular slate in Greenfield today, and will open the Western Massachusetts tournament on Wednesday. Wade was hopeful for a home game at War Memorial, but a lot was still up in the air with one day to goin the regular season.

The Senior Legion team out of Post 340 in Sheffield is also onto the postseason. They play their first tournament game on Friday in Westfield.