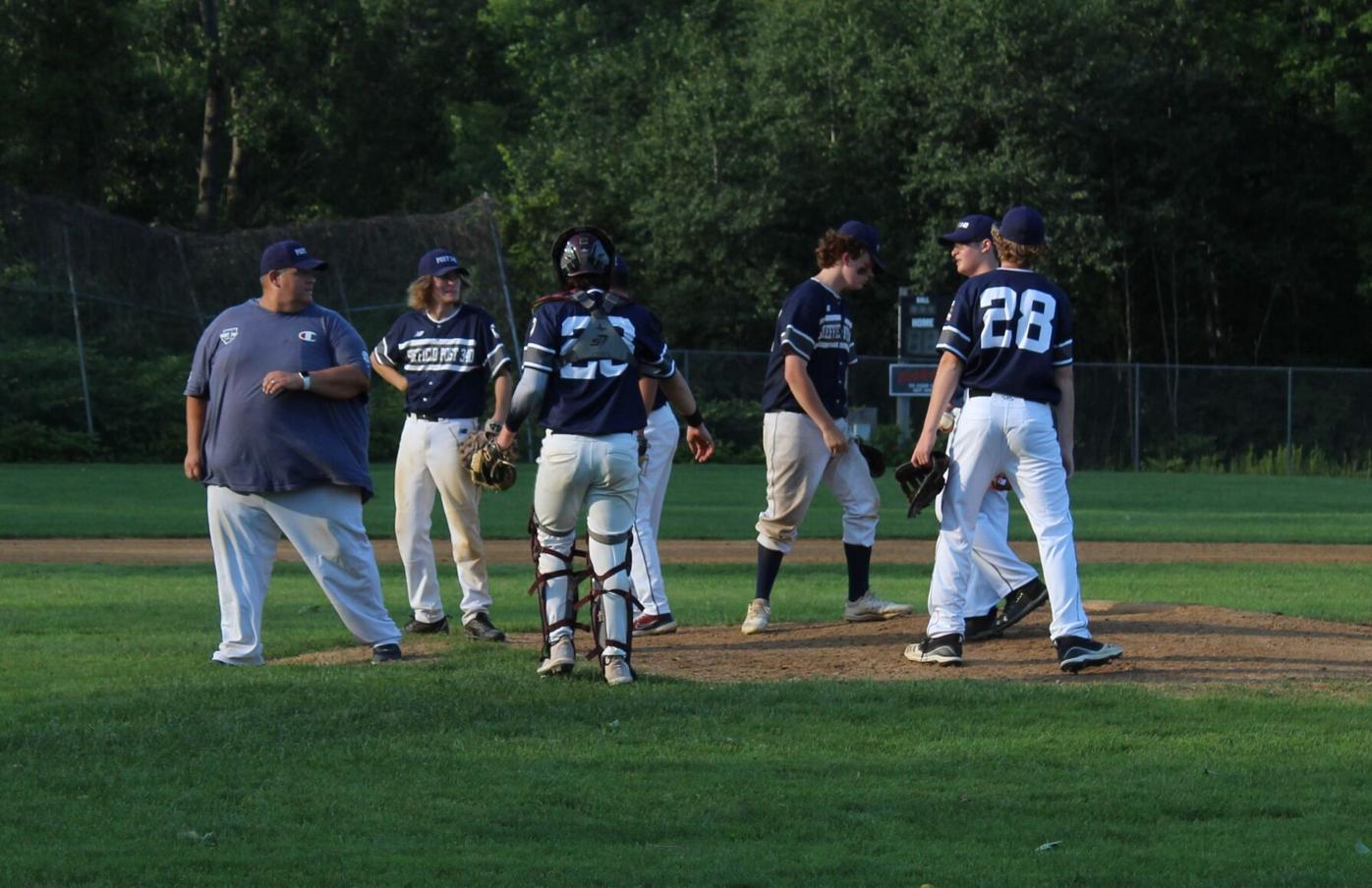 Coach Brian Wade has a visit on the mound with his Sheffield Post 340 Junior Legion players during Wednesday’s home playoff game. 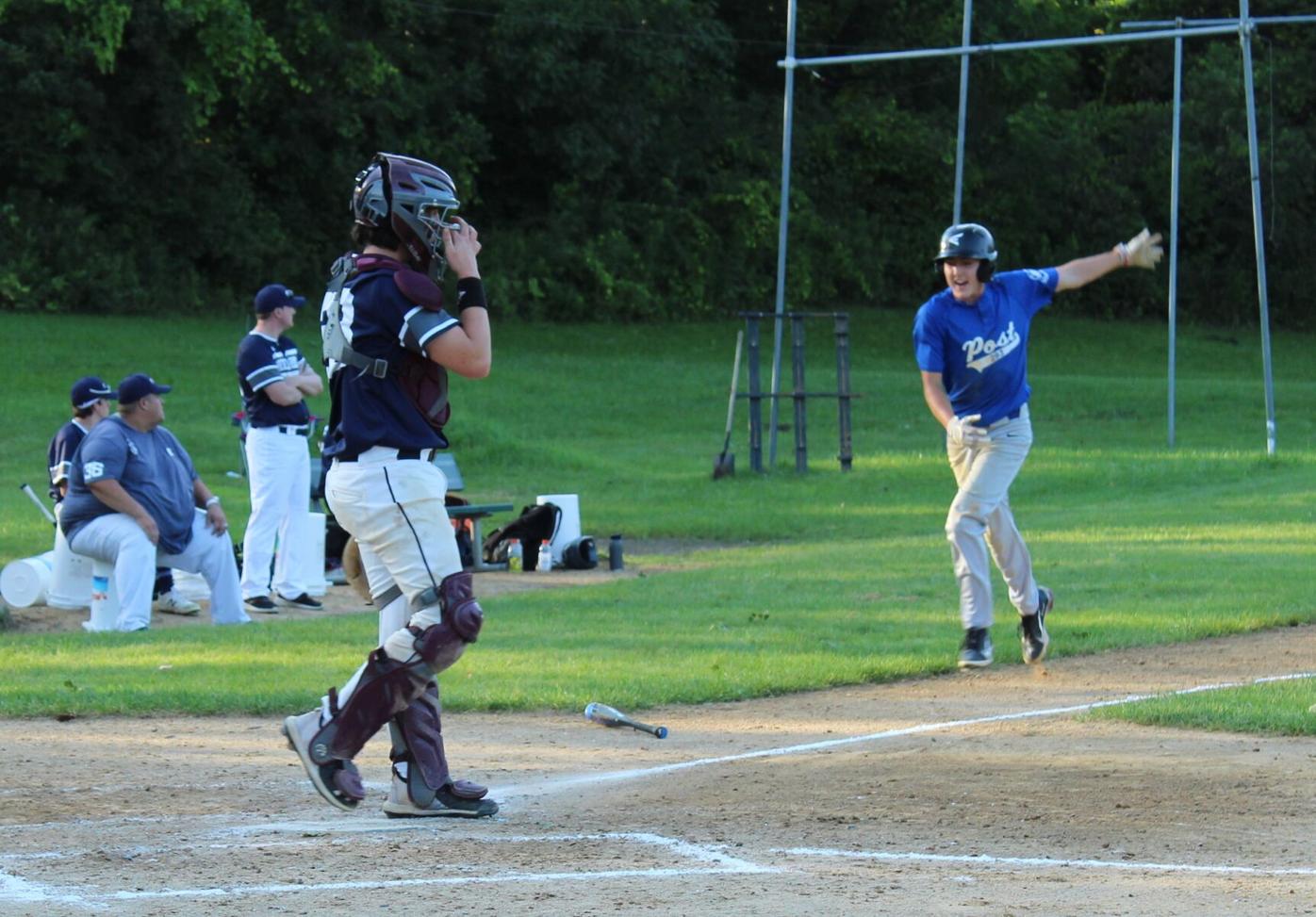 East Longmeadow’s Connor Robidoux waves his teammates around while scoring a run himself on Wednesday against Sheffield.

LENOX — The damage that a storm-ridden July has done to the area surrounding the diamond at War Memorial Field was reflected in Sheffield’s performance Wednesday night in its 9-5 loss to East Longmeadow.

“This was a great group of guys. I really enjoyed coaching them,” Sheffield Post 340 Junior Legion coach Brian Wade said. “I wish we had a more consistent summer. So many rainouts made it hard for us to be together.”

“We lost out on a third of the season. Those games could’ve made a difference in how we finished,” Wade said, less than 24 hours after Lenox was smashed by a thunder and lightning storm.

Wade’s comments of gratitude for his team followed a hard-fought play-in tournament game between Sheffield and an East Longmeadow team that finished their regular season at 1-9.

“These guys came together at the right time,” East Longmeadow coach Craig Woodward said. “Solid pitching and solid hitting, You put the ball in play and you put the pressure on the defense.”

The bout began with East Longmeadow’s Connor Robidoux firing the first pitch back up the middle for a base hit. He then stole second base and scored on a Dom Burack single that landed in right-center field.

Sheffield responded with a run of its own, as hometown Lenox Millionaire Brendan Armstrong worked a walk, stole second and scored on a near-inning-ending 6-4-3 ball that only earned one out as the first baseman pulled his foot off of the bag.

The second inning scoreboard was held at 1-1 thanks to an outstanding catch-and-throw double play by Robidoux in center field. He caught a semi-deep fly ball and had the Sheffield base runner dead to rights, the throw beating the runner by about six feet.

“At the end of the regular season we actually had a similar play,” Robidoux said. “You just have to trust yourself… I felt like it was a good time to shoot it.”

Robidoux then followed the athletic play by leading off for the visitors, and drilling a double to the left-center field gap. He later scored from another Burack sacrifice fly to center.

“[Connor] is probably our best player overall,” the visiting coach said. “We can put him anywhere in the field and we have confidence in him.”

Mimicking the first exchange of runs, Armstrong reached base in the bottom of the third with a walk. He then stole second base and crossed the plate on an East Longmeadow error.

Up to this point, Sheffield starter Mike Naventi fanned four batters, mixing his fastball and off-speed well. His day was done after the third, giving way to Owen Wade.

Wade’s first batter, Jack Woodward, smoked a double to the right-center gap and took third on a wild pitch. The next four batters were a combination of alternating strikeouts and walks.

A 3-2 pitch to East Longmeadow’s Nolan Griffin went outside, loading the bases for the top of Post 293’s batting order — Connor Robidoux. It was at this point that hard line drives, passed balls, and errors would be Sheffield’s demise.

After five runs crossed the plate in an East Longmeadow two-out rally, Max Shepardson came in to pitch for Sheffield but the Royal Blue pressed on, tacking on two additional runs, totaling seven plated runners in the fourth inning.

Post 340 later flexed some resilience, starting a three-run rally of their own with a bunt for a hit by Marco Buffoni. Armstrong and Cole Bissaillon ripped a pair of doubles and all three of these batters scored, making it 9-5 in favor of East Longmeadow after five.

Both teams had hard-hit balls throughout the rest of the game, but defense and solid pitching from East Longmeadow’s Jack Woodward and Sheffield’s Shepardson accelerated things to the 9-5 finish.

“We didn’t think Jack would go more than 45 [pitches] but he toughed it out and had a great game for us,” Coach Woodward said.

East Longmeadow now advances to play Friday at Easthampton in the first round of the District 3 Junior Legion playoffs.