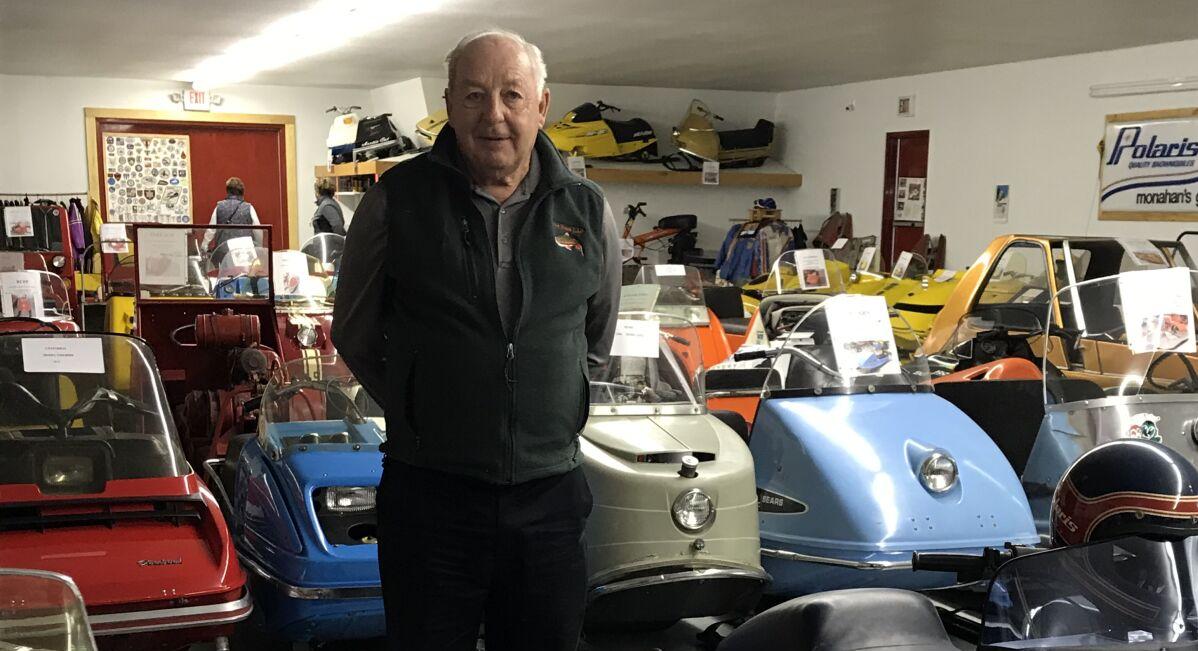 Sheffield’s Jim Wilkinson at his induction to the Eastern Snowmobile Racing Hall of Fame in Lancaster, N.H. 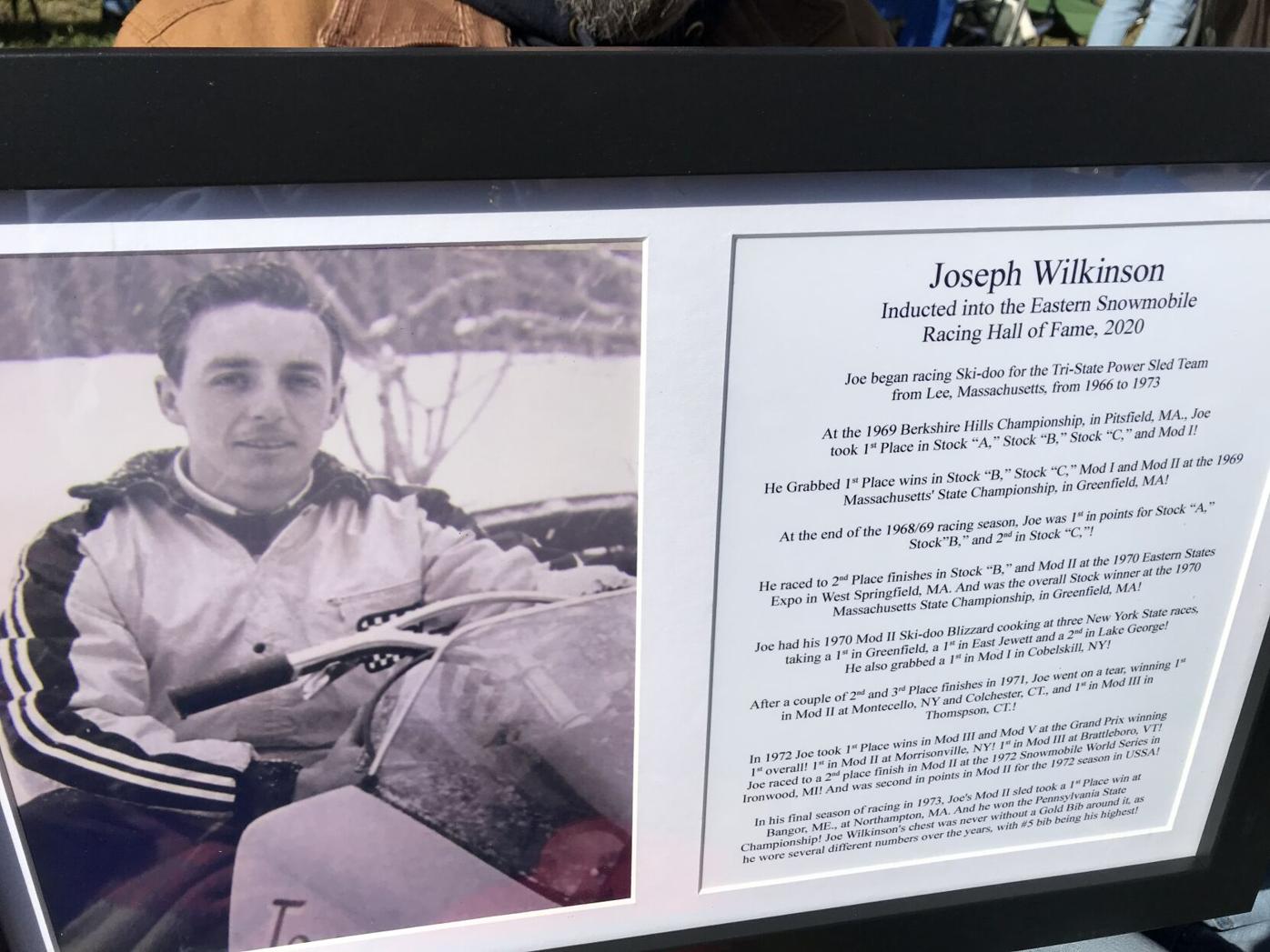 PHOTO PROVIDED BY MOLLY CURTIN SCHAEFER Sheffield’s Jim Wilkinson has a plaque at a museum in Lancaster, N.H. in honor of his induction to the Eastern Snowmobile Racing Hall of Fame. 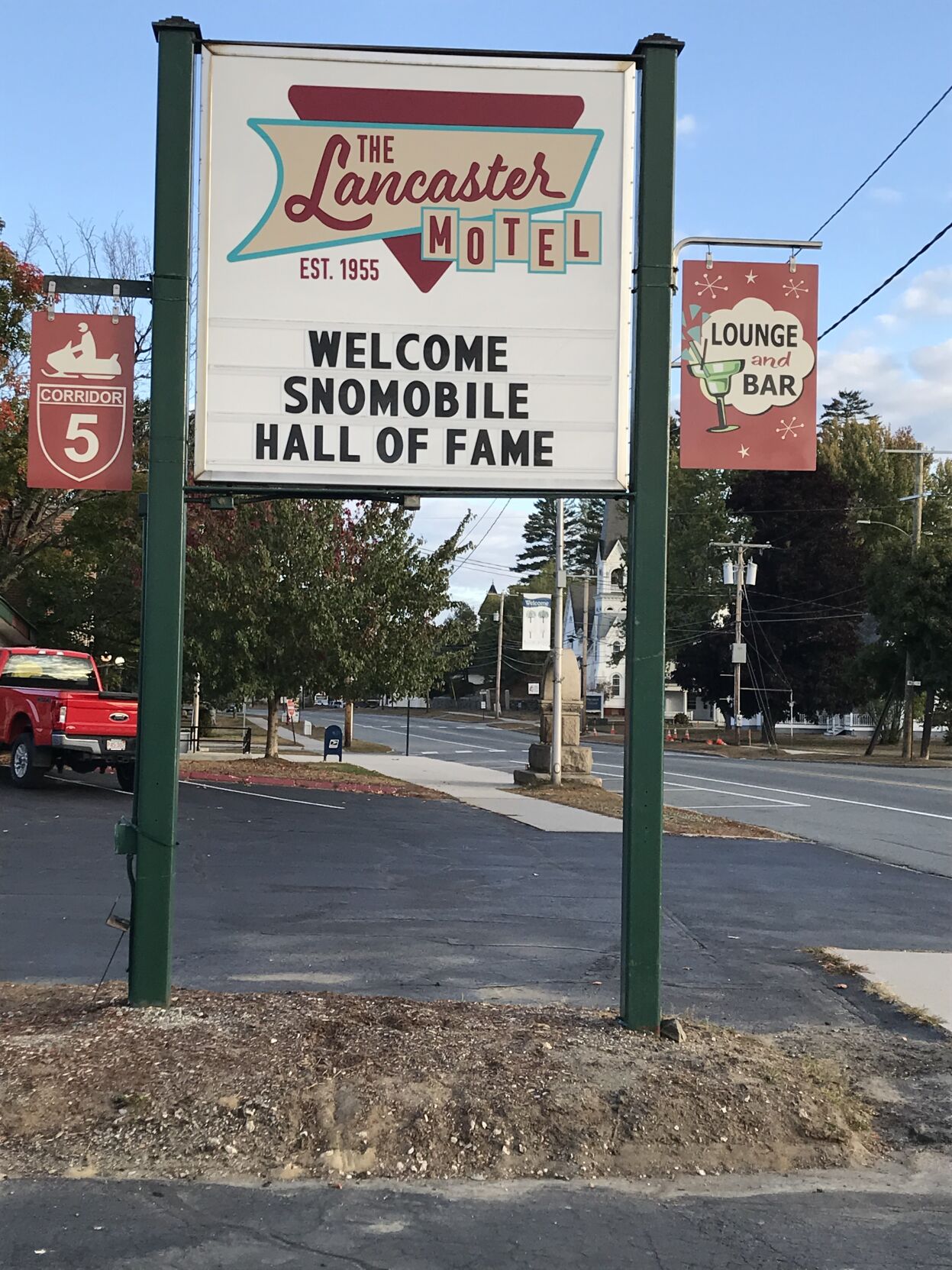 The Eastern Snowmobile Racing Hall of Fame is in Lancaster, N.H. 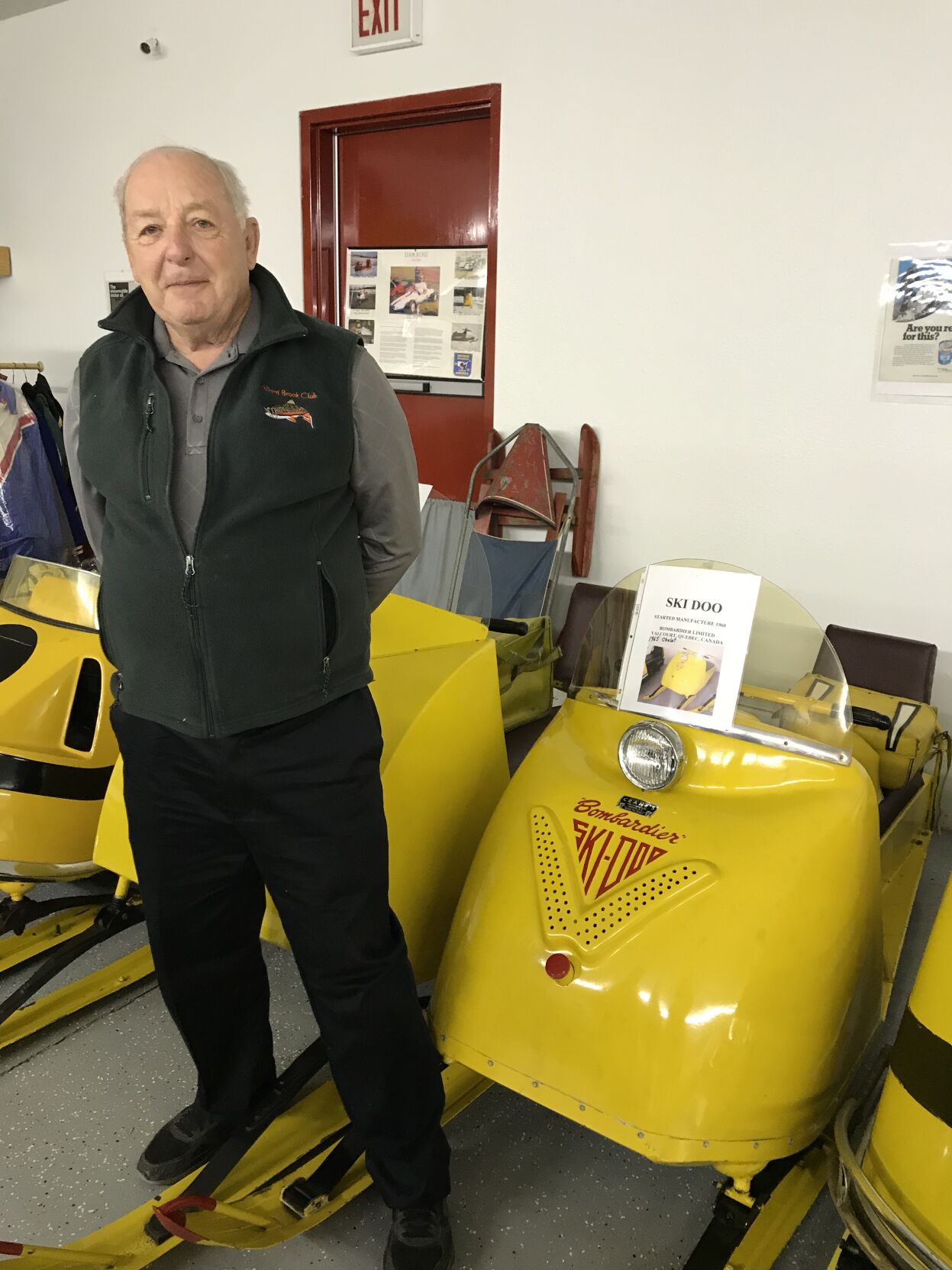 PHOTO PROVIDED BY MOLLY CURTIN SCHAEFER Jim Wilkinson with a 1965 Bombardier Ski-Doo snowmobile, much like the one he used to race from Great Barrington to all over the country. 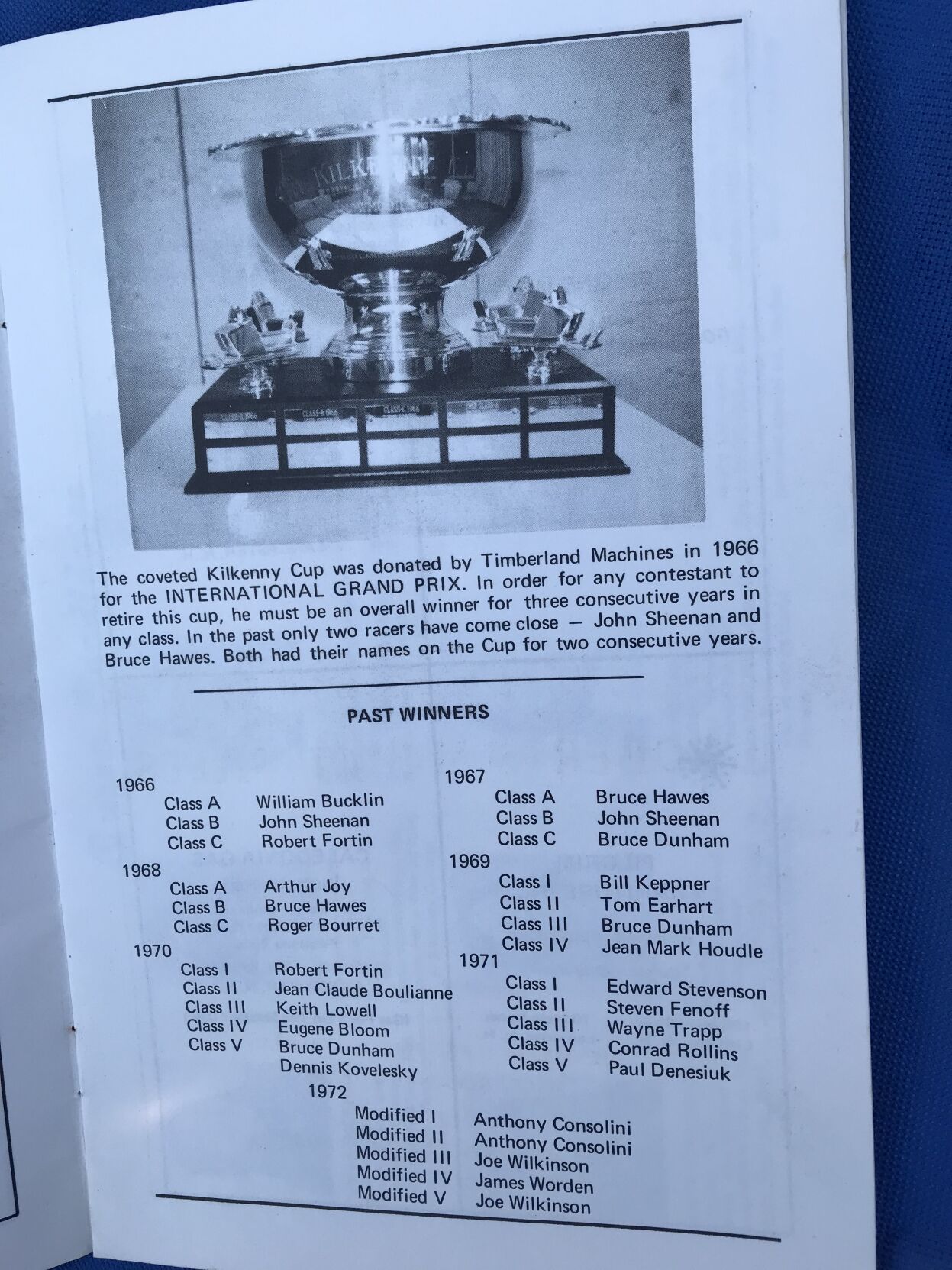 PHOTO PROVIDED BY MOLLY CURTIN SCHAEFER A photo of the Lancaster Grand Prix trophy, won by Ray LaGrant in the early 1960s, and gifted to the Eastern Snowmobile Racing Museum by grandson Jim Guachione. 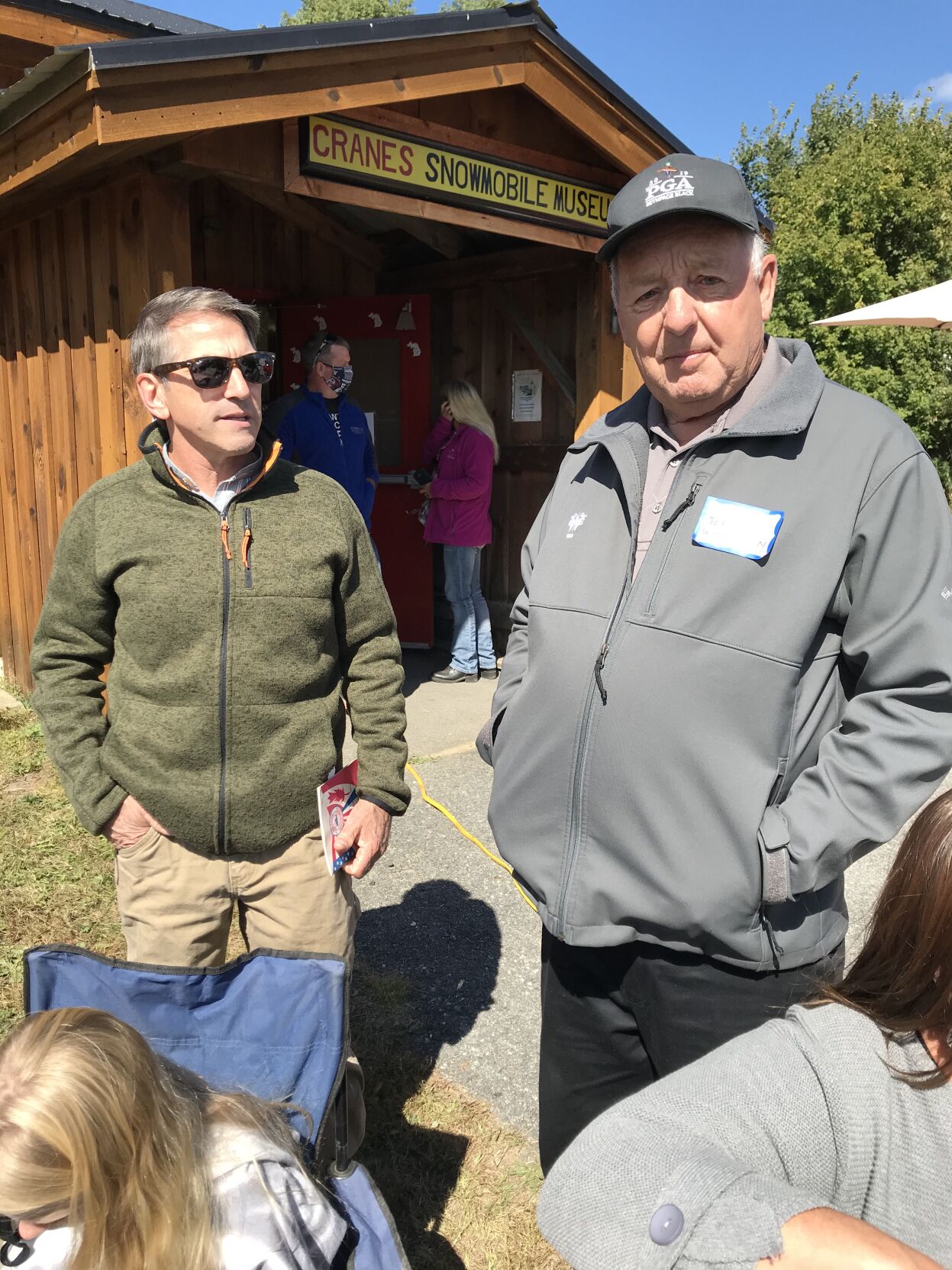 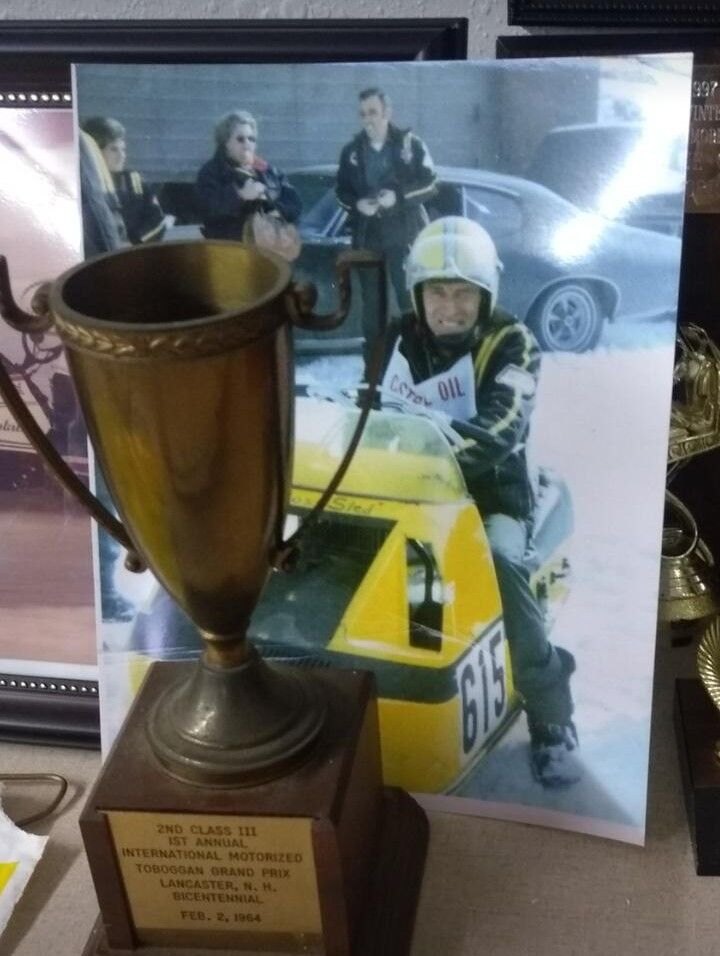 A trophy from the Lancaster Grand Prix, won by Ray LaGrant in the 1960s.

Sheffield’s Jim Wilkinson at his induction to the Eastern Snowmobile Racing Hall of Fame in Lancaster, N.H.

PHOTO PROVIDED BY MOLLY CURTIN SCHAEFER Sheffield’s Jim Wilkinson has a plaque at a museum in Lancaster, N.H. in honor of his induction to the Eastern Snowmobile Racing Hall of Fame.

The Eastern Snowmobile Racing Hall of Fame is in Lancaster, N.H.

PHOTO PROVIDED BY MOLLY CURTIN SCHAEFER Jim Wilkinson with a 1965 Bombardier Ski-Doo snowmobile, much like the one he used to race from Great Barrington to all over the country.

PHOTO PROVIDED BY MOLLY CURTIN SCHAEFER A photo of the Lancaster Grand Prix trophy, won by Ray LaGrant in the early 1960s, and gifted to the Eastern Snowmobile Racing Museum by grandson Jim Guachione.

A trophy from the Lancaster Grand Prix, won by Ray LaGrant in the 1960s.

Snowmobiles weren’t very popular some 55 years ago, but a young Jim Wilkinson thought they looked like fun.

Somewhat against his family’s wishes, the 21-year-old Wilkinson bought an old, used sled and set about fixing it up, learning as much as he could as fast as he could.

“There was a race in Great Barrington,” Wilkinson, now in his late 70s, said. “That was one of the first races, in 1965 I think, in Great Barrington, probably the Kiwanis put it on. I went to it as just an independent, had a snowmobile I was fooling with, and I won the race. That started the whole thing.”

This fall, Wilkinson was inducted into the Eastern Snowmobile Racing Hall of Fame in Lancaster, N.H. It’s an honor he’s a bit shy about, but one that is a culmination of a lifelong passion and the friendships that came with it.

Part of the field that day in Great Barrington was Fred “Ray” LaGrant, who owned and operated Tri-State Power Sleds in Lee.

“Mr. LaGrant had come down with some new machines, and I had an older one I was working on, and I beat him in the race,” Wilkinson remembers. “The next year, he came down and hired me. One of those guys, if you can’t beat ‘em, hire ‘em.

“When I went there, my family thought snowmobiles were a fluke, flash in the pan. But they’re still around today, and it’s become a big business.”

Wilkinson worked for LaGrant as a Ski-Doo distributor in Massachusetts, Connecticut and Rhode Island, but where he really made his impact was in the promotional races. As part of sales promotion, LaGrant would sponsor riders in hopes that they would win and drum up more business. Wilkinson was his best.

“It’s like a motorcycle, the more you ride the better you get, and I did race a lot from 1966 to 1973. I won a lot of big races back then,” Wilkinson said. “They paid for us to race, they’d give us the machines, pay our way around, pay our entry fee, and all we had to do was go out and win. And whatever prize money you won, you kept.”

Wilkinson took first place in Stock A, B and C, and Mod 1 in the 1969 Berkshire Hills Championship in Pittsfield, and went on to win the Massachusetts state championship for Stock B, C, and Mod I and II in Greenfield later that year. The following season, he was the overall stock winner at the state championships and runner-up at the Eastern States Expo in West Springfield.

It wasn’t just local races, either.

“It was a good job for me. I learned a lot, and I got to race all over the country, from out in West Yellowstone [Montana] to Wisconsin, Michigan, New York, Pennsylvania, Maine, all over New England. We traveled a lot back then,” he said.

In 1972, he won the Mod III and V races to take first place overall at the Grand Prix. He said his biggest wins ever came in Lancaster that year, racing in the 440 and 800cc class. He grabbed another win in Brattleboro, Vt. and finished the season second in points for Mod II in the United State Snowmobile Association.

A year later, his final season racing sleds, he earned major wins in Northampton and Bangor, Maine, before claiming the Pennsylvania state title.

“They had a little ceremony in Lancaster, and everybody got to talk about their career and what they did, and they hang a little plaque on the wall with your picture,” he said of the ceremony a few weeks ago in New Hampshire. “They gave me one, don’t even look like the same guy, 50 years ago.”

Wilkinson got the call a year ago out of the blue. He wasn’t aware of a snowmobile hall of fame. The ceremony was originally supposed to be in May, but was moved to an outdoor event in the fall due to the pandemic.

Ski-Doo was sold to Bombardier in 1969, and Wilkinson stayed on working until his position was being moved to Duluth, Minn. The life-long south county resident, along with his wife, didn’t want to leave home.

“I grew up in between New Marlborough and Sheffield. Spent all my life down here,” he said. “This is home.”

Wilkinson has spent the last 50-or-so years in business for himself, running Joe Wilkinson Excavating out of Sheffield.

He was 23 when LaGrant made him the second ever employee for Ski-Doo in Lee. The two stayed close friends until LaGrant’s death in 1990.

“Ray LaGrant was really, really good to me. He was like a second father to me, that good. I had it made with him,” he said. “We did a lot of things together, had a lot of fun.”

A year ago, Wilkinson was thumbing through the newspaper and saw that Gladys, Ray’s wife celebrated her 100th birthday. So he and his wife went to visit her at a home in Lee.

“She was amazing, remembering things we did back in the 60s. She’s a tough, old lady,” he said. “[Ray LaGrant] was awful, awful good to me. Best boss anybody could ever have. He was good for me.”

Gladys, now 101, has her own part in this story, as she gave the OK for her grandson, Jim Guachione, to bring one of Ray’s old trophies to the hall of fame museum.

“I went up to see Joe get inducted, and I knew we had this trophy from the early 1960s that my grandfather had won up in Lancaster,” said Guachione, who collects and restores vintage snowmobiles himself. “I posted a photo of it on the Facebook page, and someone said it’d be a nice thing to have there.”

“Jim’s grandfather had gone up to that Lancaster Grand Prix in maybe 1961 and won a trophy,” he said. “Jim left it with them. It’s always been a big race every year.”

Guachione, about a decade-and-a-half younger than Wilkinson, remembers traveling on occasion with the team as a 7 or 8-year-old. He watched them race in places like Boonville in upstate New York, where he said the snowbanks were twice his size. When he heard of Wilkinson’s induction, he couldn’t miss it. A whole party of about 30 folks from Berkshire County made the trek up, and Guachione brought the head of the museum out to his car to see the trophy.

“He just goes, ‘That’s incredible,’” Guachione relayed. “He was in shock. It was awesome, and I just told him I’d like to donate it. It was something they didn’t have, from way back, one of the first races up there.”

Snowmobiling is big business in Lancaster, and the Grand Prix is a weekend-long event with a parade and ceremonies. Much like it was in the 70s in Berkshire County, where races were held from Greenock in Lee to Lanesborough and all over Pittsfield.

“It’s funny,” Guachione said. “Everybody in Berkshire County has somebody. A father, brother, grandfather, whomever, who was a great snowmobile racer.”

When it comes to hall of fame recognition, it appears, Wilkinson is just the first.