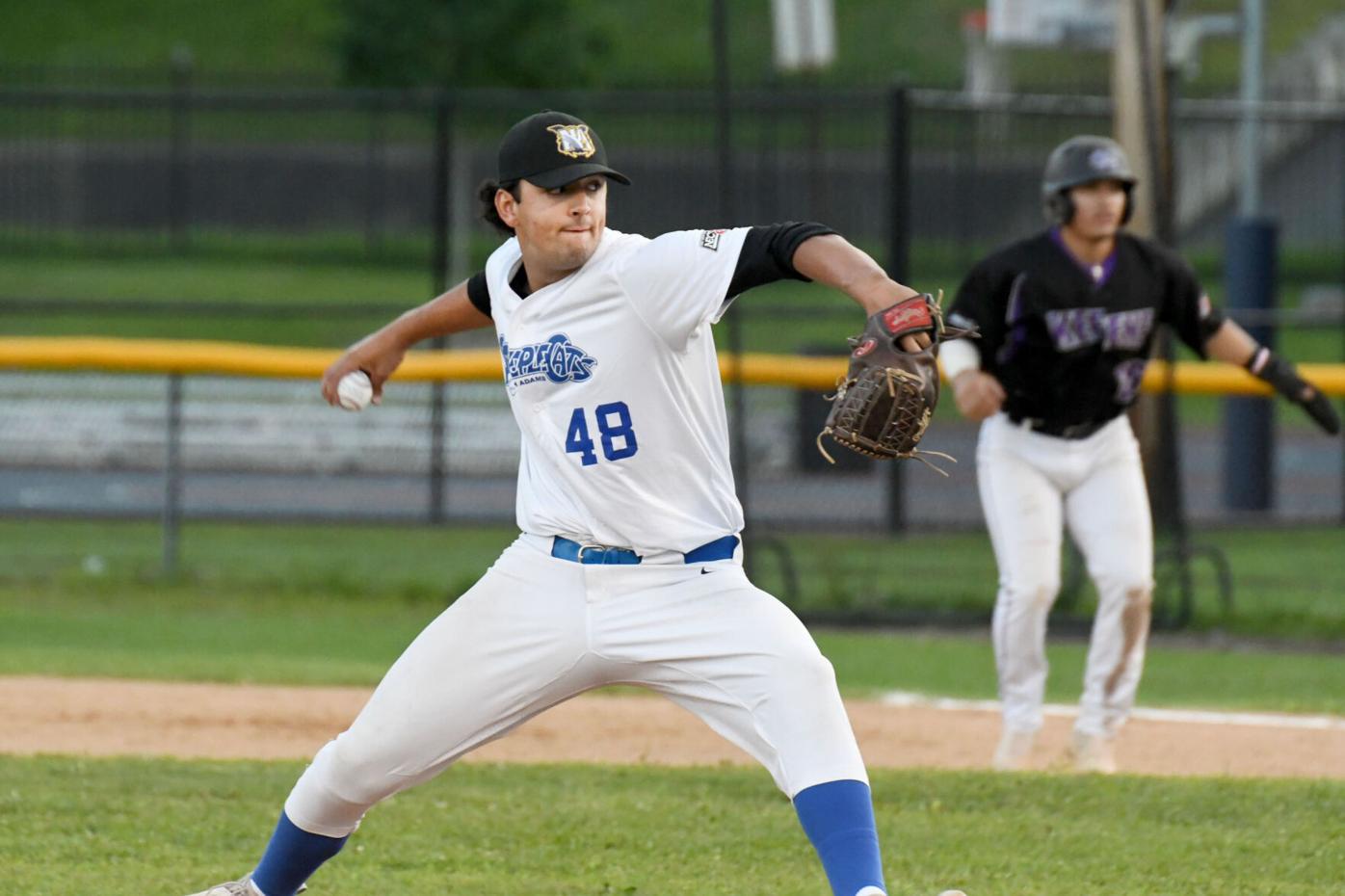 North Adams' Luke Benneche pitches against Keene in their last home game of the season at Joe Wolfe Field on Friday night. 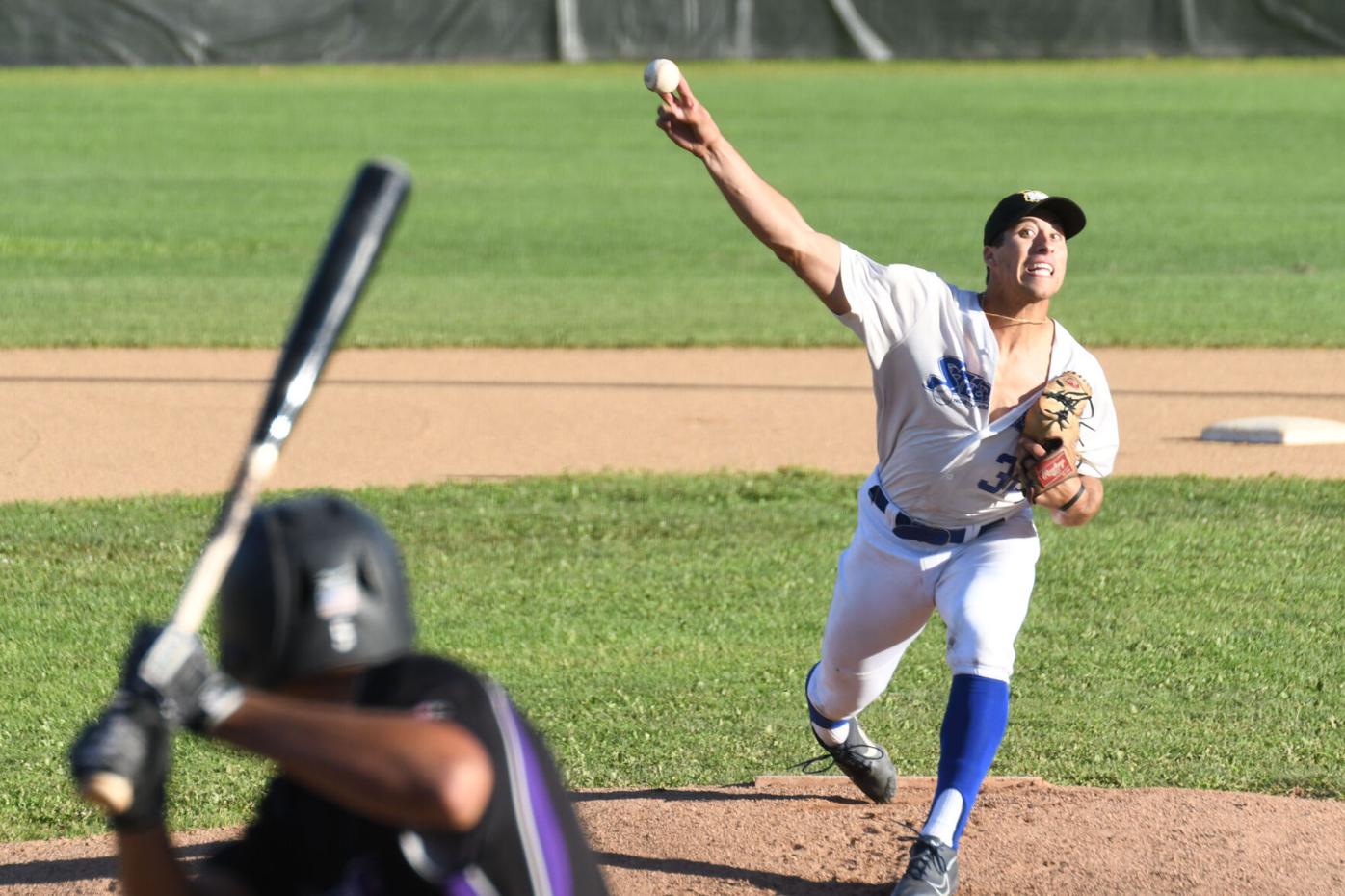 North Adams' Samuel Bennett pitches against Keene in their last home game of the season at Joe Wolfe Field on Friday night. 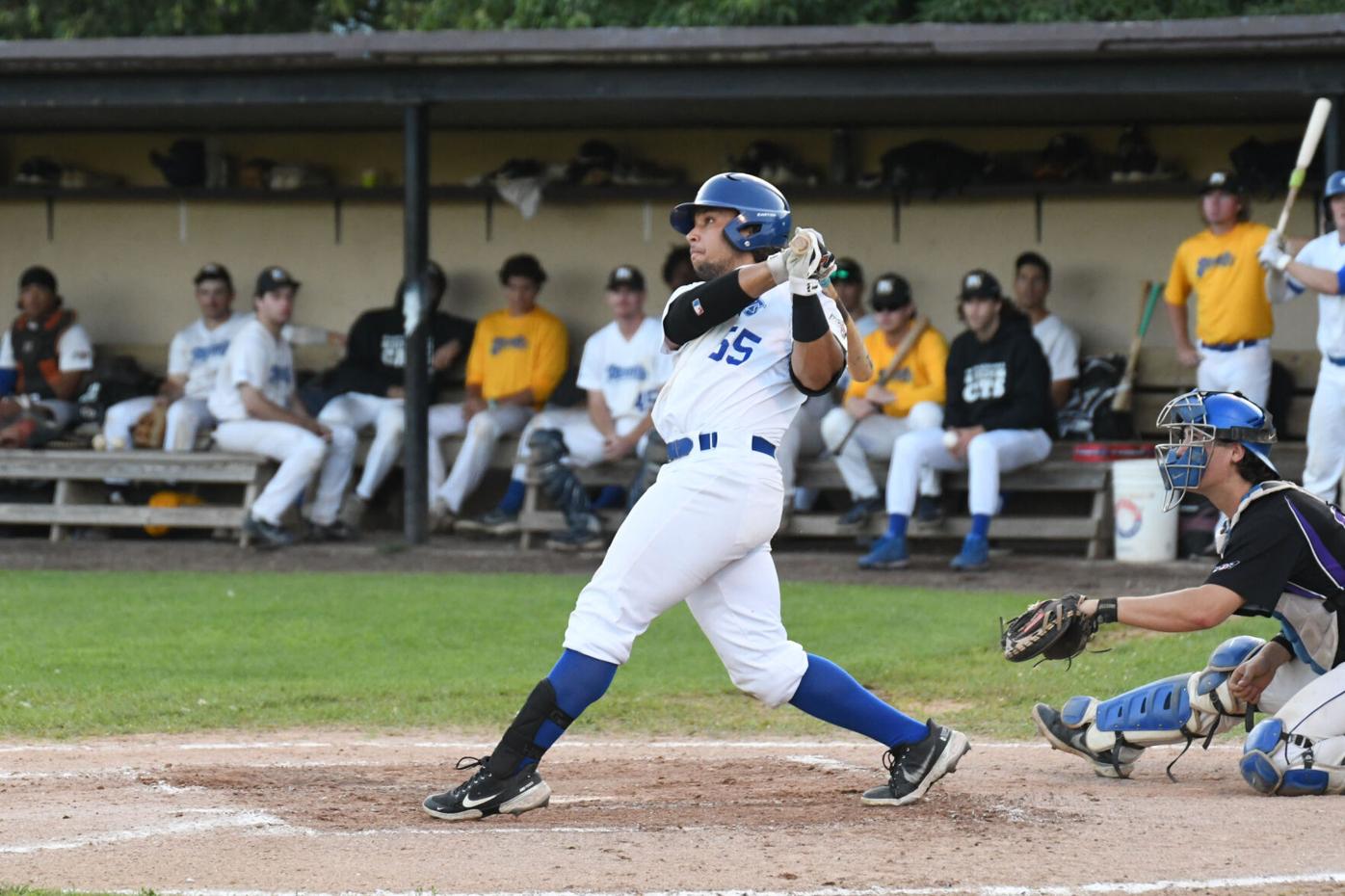 North Adams' Charles Middleton hits the ball during their last home game of the season against Keene at Joe Wolfe Field on Friday night.

NORTH ADAMS — It may not be the easy thing to do, but the North Adams SteepleCats know what lies ahead for them.

"We just have to win out," SteepleCats manager Mike Dailey after Northern Division leader Keene escaped Berkshire County with a 5-2 win in the SteepleCats' regular-season home finale Friday night.

"If we want to win the championship, win the North championship," he said, "we just need to win out and kind of control our destiny. We have a doubleheader [Saturday], and if we can sweep the doubleheader, then we'll look after that."

The SteepleCats came into game knowing if they beat the Swamp Bats at Joe Wolfe Field, it would vault them into first place in the Northern Division. Instead, Dailey's warriors managed only four hits and didn't break into the scoring column until the eighth inning.

Upper Valley, meanwhile, beat North Shore 4-2 on Friday. That win and North Adams' loss, put the SteepleCats and Nighthawks tied for second in the North. They are 1 1/2 games behind the leaders from Keene.

"We ran against a tough pitcher tonight," North Adams left field Charles Middleton said. "We know how to score runs. We know how to pitch well. I think this game is going to be a learning curve, and we'll get back at it tomorrow against Winnipesaukee."

The NECBL playoffs are due to start on Tuesday, with seeds 2-7 playing in a one-game knockout round. The two division champions would not start postseason play until Wednesday.

But before the SteepleCats and Swamp Bats can laser focus on the playoffs, they had to get through Friday night's game. It was a rough one for the North Adams offense as Keene starter Cole Stallings and two relievers held the SteepleCats to just four hits in the game. Jeremy Lea's leadoff single in the fourth inning was the first hit of the game for the home side.

Stallings went five innings for the win. He held the 'Cats to one hit and two walks while striking out four.

"He was locating his pitches pretty well. Even when he was throwing his fastball over the plate, it still had some pretty good movement," Middleton said. "He was getting the better of us tonight."

One of the positives out of the game came out of the SteepleCats bullpen. Four relievers held Keene to one run in six innings. Two of the relievers, left handers Nathan Masteralexis and Joe Fischer made successful debuts with scoreless innings.

Keene scored three runs in the third inning, which turned out to be enough. Troy Schreffler, who went 4 for 4 with two runs batted in, doubled down the right field line, scoring Zach Bushling, who had walked to lead off the third. The next batter was Noah Martinez and he hit the first pitch from Sam Bennett over the wall in right center. It was Martinez's sixth homer of the year, and the Swamp Bats led 3-0

The SteepleCats did not go down without a fight. They threatened with two runners on and two outs in the seventh before cracking the scoreboard in the eighth.

Matt Shilling, pinch-hitting for Justin Grech, led off with a walk and took second on JuJu Cason's single deep in the hole at shortstop. When Washington walked Jon Kozarian, Keene manager Shaun McKenna called for Grant Besser. The lefty got Lea on a pop out for the first out.

Then North Adams got a break when Brandon Hylton hit a grounder to first, but Besser was charged with an error after Martinez threw the ball to first. Hylton was safe and the bases were loaded. Middleton hit a deep foul fly to left where Thomas Joseph caught the ball in foul territory near the Keene bullpen. That scored Cason with the second run.

John Marti walked to load the bases. Mason Hull came up and struck out to end the threat. The SteepleCats went in order in the ninth.

"We need to push the reset button at the plate a little bit. We didn't have good approaches tonight and watched a lot of second strikes go by that had a lot of the plate," said Dailey. "We ran up against a good pitcher. You have to tip your hat to their guy. He threw strikes. Overall, they did pretty well so give them credit."