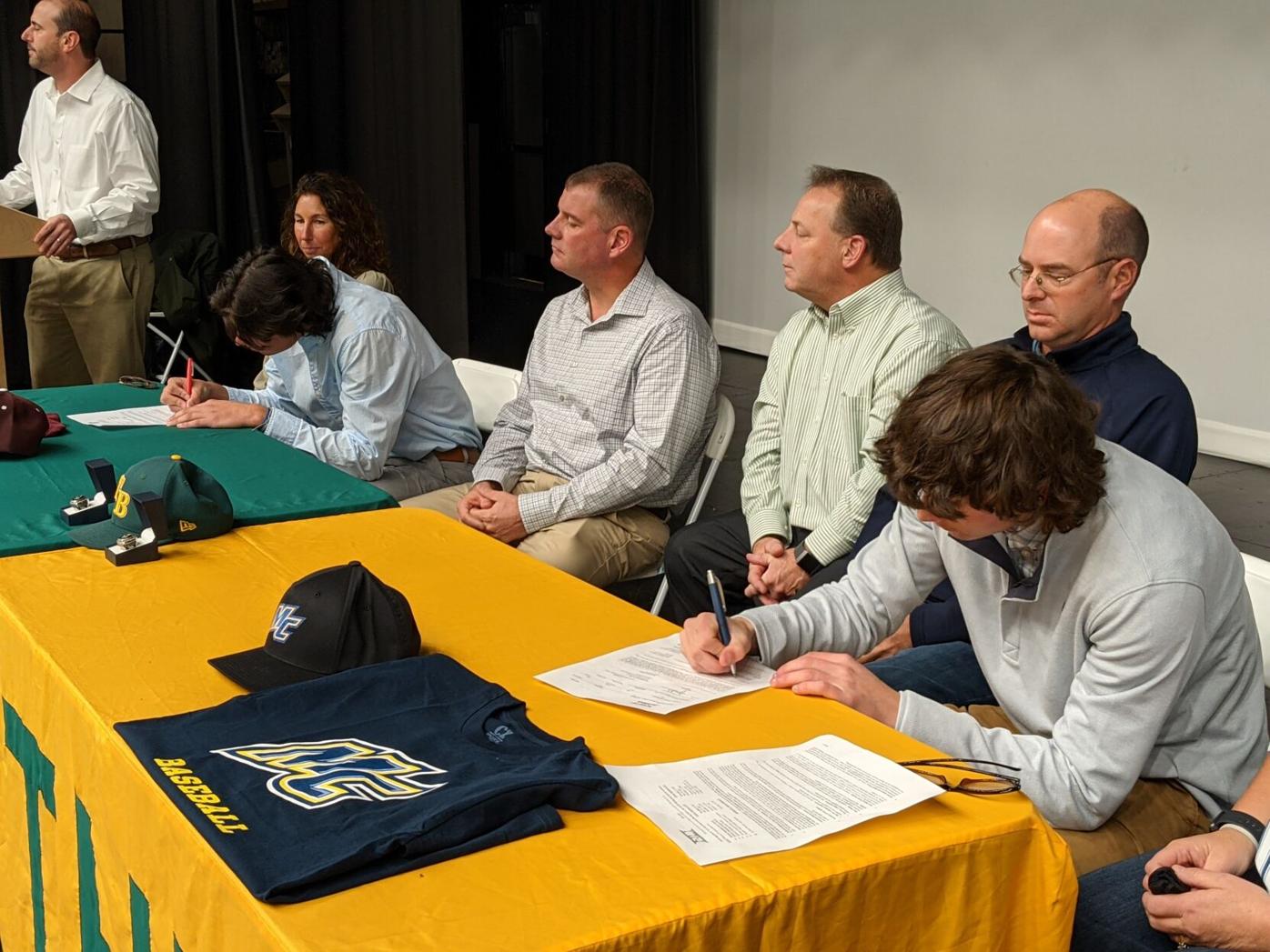 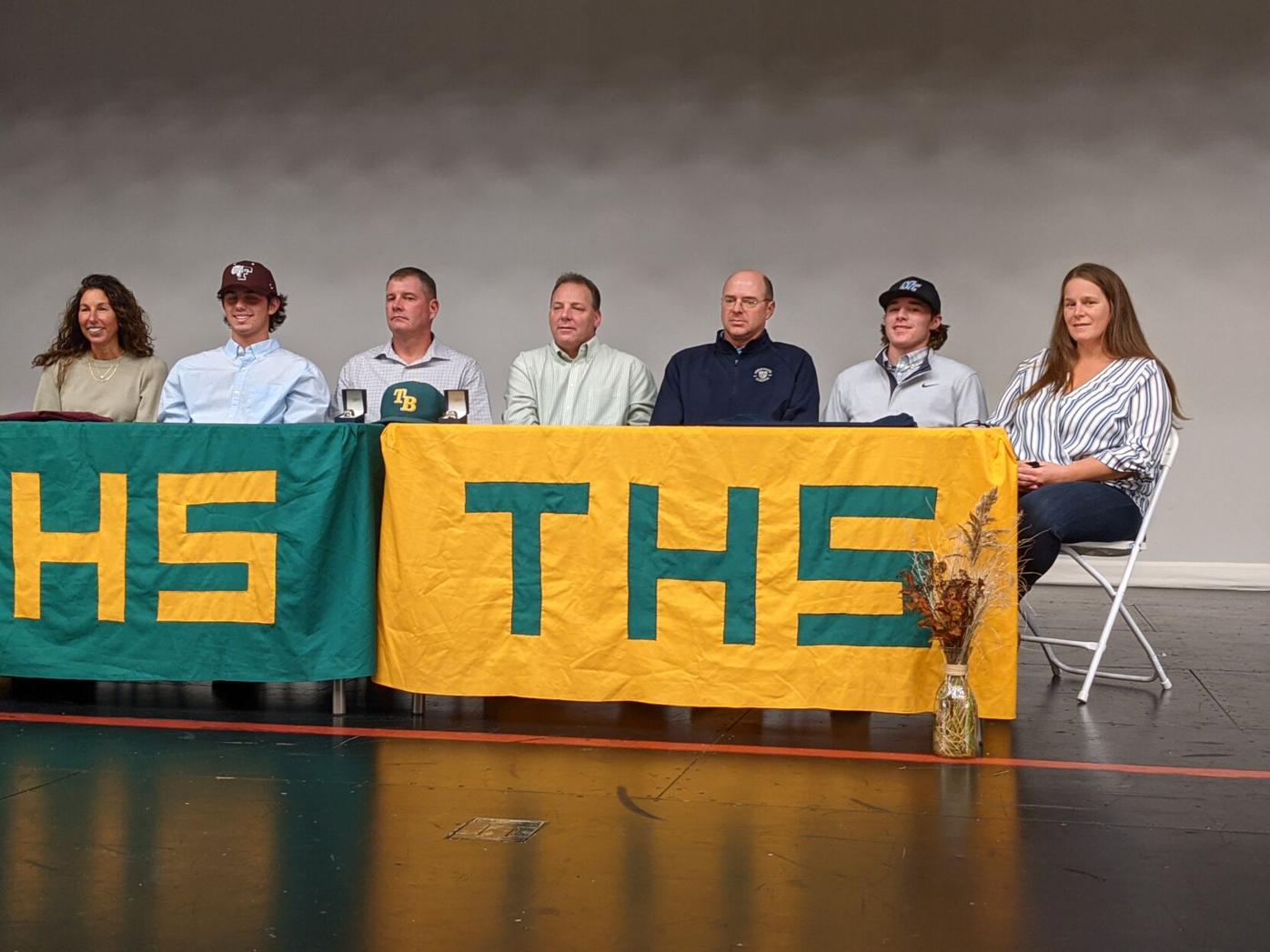 PITTSFIELD — The destinations have been known for weeks, but they didn't become official until Bo Bramer and Sam Sherman put pen to paper.

The two rising seniors at Taconic High School signed their National Letters of Intent Monday morning, which committed them to playing Division I baseball.

Bramer will head for New York City to play at Fordham, while Sherman will play at Merrimack, a school about 30 minutes north of Boston.

While signing an LOI seems to be an easy thing to do, Sherman said the run up to signing was anything but easy.

The next question made the senior smile. Was it an easy night to sleep?

"It was actually tough," Sherman said. "I was up late last night, thinking about what I was going to say and I still messed up."

Sherman and Bramer, along with their parents Bryon and Stacie Sherman and Pat and Tina Bramer, gathered in the Taconic High School auditorium for a signing ceremony. They were joined on stage by baseball coach Kevin Stannard and athletic director Jim Abel, who acted as the master of ceremonies. Current and former Taconic teammates, the school's coaching staff and others were gathered in the auditorium to witness the signing ceremony.

"These teams are getting top quality people," Abel said in prepared remarks.

For his part, Stannard said he couldn't be more thrilled to add the names Bramer and Sherman to a list of players who have moved on to play college baseball in all three divisions. That number includes first-year freshmen Brendan Stannard at Williams and Anton Lazits at Columbia. Matt Lee and Evan Blake, two juniors, have also made verbal commitments. Lee is going to go to Kansas State, and Blake has decided on Bryant.

"The work that they've put in, and like we say, we don't want any of the credit. It's all them. They put in the hard work in the offseason," Stannard said. "They made a commitment to just play baseball. I know it was a tough decision for Bo to give up basketball and soccer, and Sam ended up giving up soccer. They're two excellent athletes and the commitment they put in, they knew what they wanted.

The championship game was played on July 5, before 5,000 fans at Wahconah Park. Bramer was 3 for 4, while Sherman got the win in relief as Taconic beat Medfield 14-10. Sherman also got a hit to start Taconic's 10-run sixth inning.

For his part, Bramer called having signed "a blessing."

Ahead of his senior season for Taconic baseball, Bo Bramer has made his college commitment, agreeing to attend and play for Division I Fordham.

Both Bramer and Sherman said that they have been in touch with their fellow recruits and other members of their respective teams.

"We have a group chat going with a bunch of our commits," Bramer said. "We've been talking. We're starting to build a relationship."

And building a relationship with the coaches at Fordham.

"They've given us stuff to do. They've given me some goals," he said. "But, otherwise they gave me the freedom."

"I met five other commits so far. We met in a group chat," Sherman said. "We text now and then."

And before you know it, Sherman and Bramer will be back with the Green and Gold getting ready for their season.

"Oh, we're ready," said Bramer. "We're itching to be back on the field already, and it's only November."