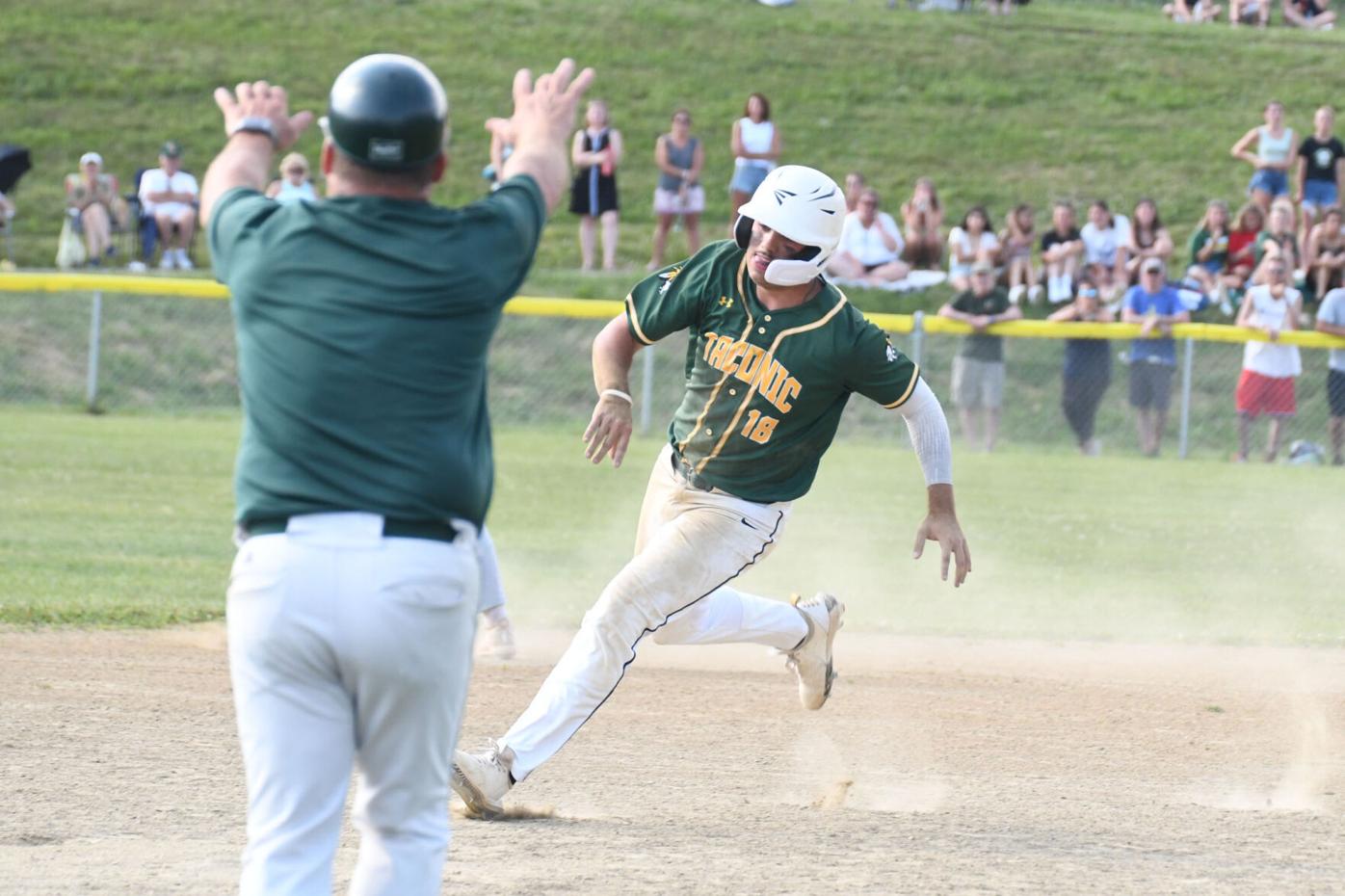 Taconic's Evan Blake, shown running from second to third during a game against Belchertown in the Western Mass. D-II Championship, has committed to playing college baseball at Division I Bryant. 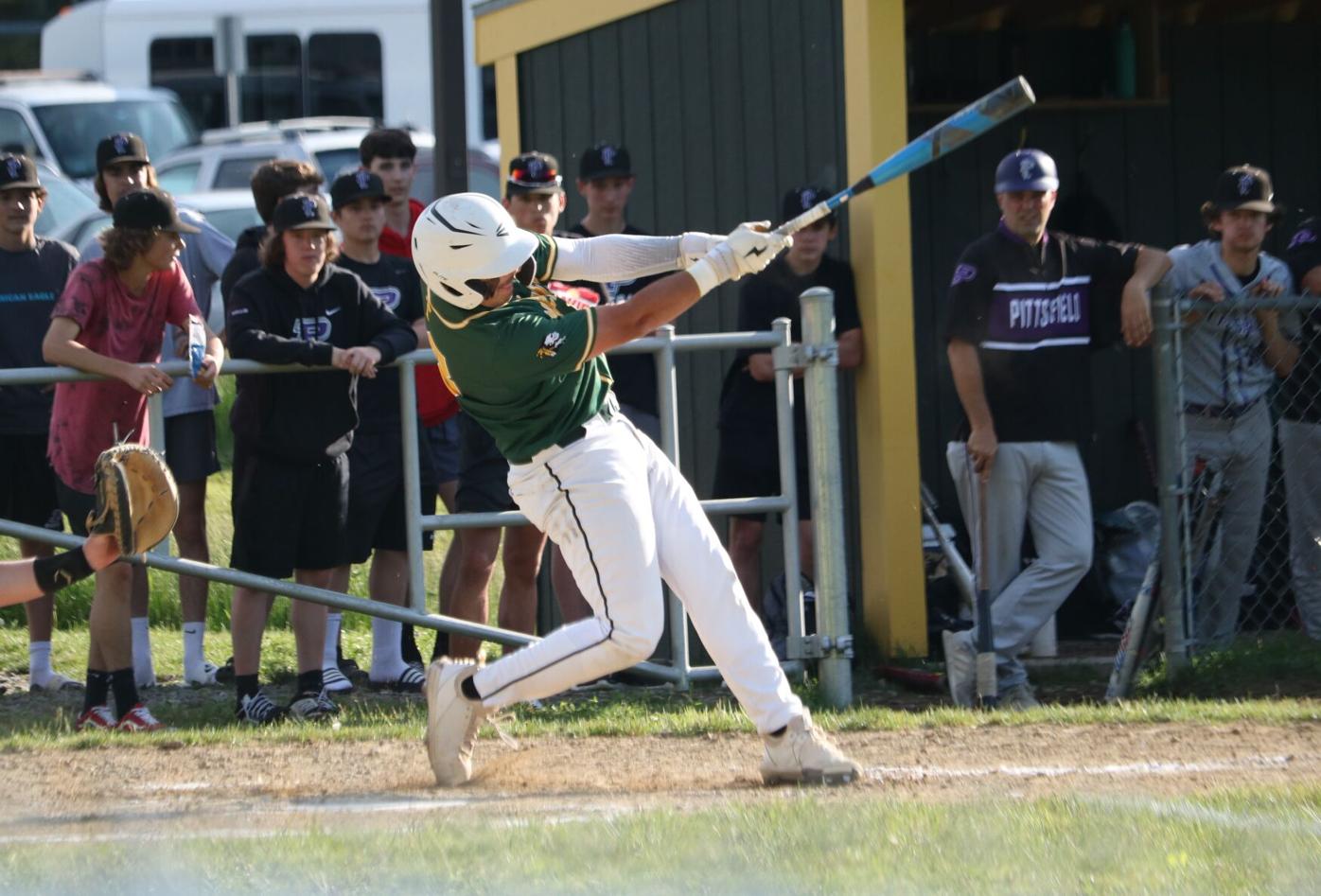 Taconic's Evan Blake takes a cut during his sophomore season last spring. Now a junior, Blake has made an early college commitment to attend and play baseball at Division I Bryant.

PITTSFIELD — Evan Blake says it was about the best fit for him, athletically and academically.

That is why the junior at Taconic has made a verbal commitment to play baseball at Division I Bryant University in nearby Smithfield, R.I.

“The way the coaches were communicating with me, I loved it at first. I went down and visited campus,” Blake said. “It blew my eyes up. I met a whole bunch of players down there, and it just felt like my home.”

While Blake had time to make his decision, there’s no time like the present.

Blake had quite a sophomore season for the Green and Gold of Taconic, and his bat really came into play in the postseason.

Blake hit two solo home runs in Taconic’s 10-2 win over Southwick in the Western Massachusetts Division II semifinals, and followed that up with a home run in the 11-1 victory over Belchertown that clinched Taconic’s fourth straight Western Mass title.

Blake’s two-run home run in the fourth inning ignited Taconic in a 4-2 win over Advanced Math and Science Academy in the MIAA state Division III semifinal. Then he had a three-run home run and a two-run double in Taconic’s wild 14-10 win over Medfield in the state championship game.

Blake will play for Ryan Klosterman at Bryant. The Bulldogs were 27-24 in 2021, and 21-4 in the Division I Northeast Conference, but lost in the NEC championship series to Central Connecticut. Klosterman was the NEC coach of the year in 2021.

Bryant has a storied baseball tradition. As a member of the Division II Northeast-10 Conference, Bryant made six NCAA Tournaments and went to the 2004 Division II College World Series.

Since becoming a member of the Division I Northeast Conference in 2010, Bryant has won 10 NEC regular-season championships — nine straight, three tournament titles and made three trips to the NCAA Division I tournament. The last trip to the NCAA Tournament was in 2016.

Ahead of his senior season for Taconic baseball, Bo Bramer has made his college commitment, agreeing to attend and play for Division I Fordham.

“They are definitely a hard-driven team,” Blake said. “They play in a really good league, and they play a whole bunch of teams down south for preseason. It lit my eyes up. The way they play, the way they take perfection to the sport, I felt a little extra than at other colleges. That’s what I liked about it.”

Blake said he first started talking to the Bryant coaches after the high school season, when he and his Rip City teammates went to the Futures Games tournament in Georgia. Klosterman did see Blake again in some early autumn tournaments.

“He came to watch me in Staten Island. I hit like two homers in front of him,” Blake said. “He called me the next day, and then that’s when I got the offer. I knew I had to make my way down there, so I went down two days after the call, and committed on the spot.”

Blake said he had been talking to coaches from Fairfield and Maine, in addition to Bryant. He said that some Power-5 schools had reached out, but never got serious in their recruiting.

Blake won’t be the only Berkshire County player on the roster. Former Mount Greylock player Cole Wojtkowski is a first-year at Bryant.

“I talked to Cole,” Blake said. “He showed me around a little bit. They were actually in a practice when I went down to visit. It was super cool.”

While it happens a fair amount among small college teams, where multiple athletes who were high school rivals become teammates, it’s not as usual at the Division I level.

“I think it’s going to be a cool experience,” Blake said, “and a really unique experience.”

Having made his decision will make the next couple of springs at Taconic a bit less pressure-filled, at least as far as deciding where Blake will go to college, the Green and Gold standout says he’s ready to head toward graduation in two years.

“I think it will make it a lot easier” to play, he said. “But, grinding doesn’t stop at all because you commit. You have to put, honestly, more effort in because if you want that spot on a Division I baseball team, you have to work for it.”