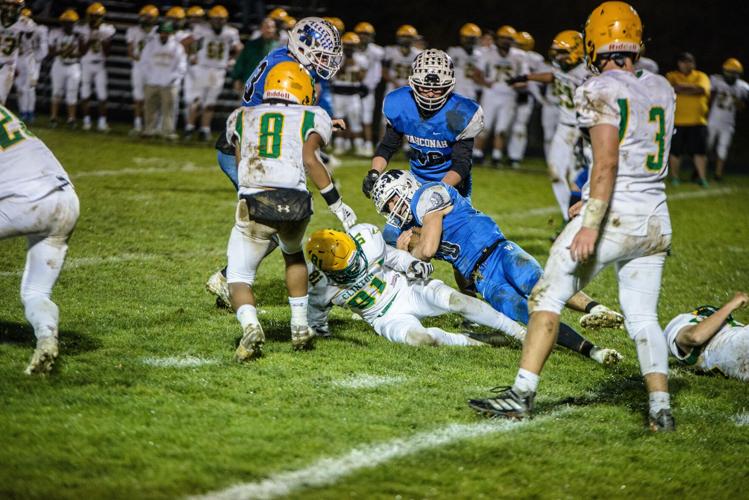 Jonah Smith didn't spend a ton of time on the ground Friday night, rushing for over 300 yards and four touchdowns. 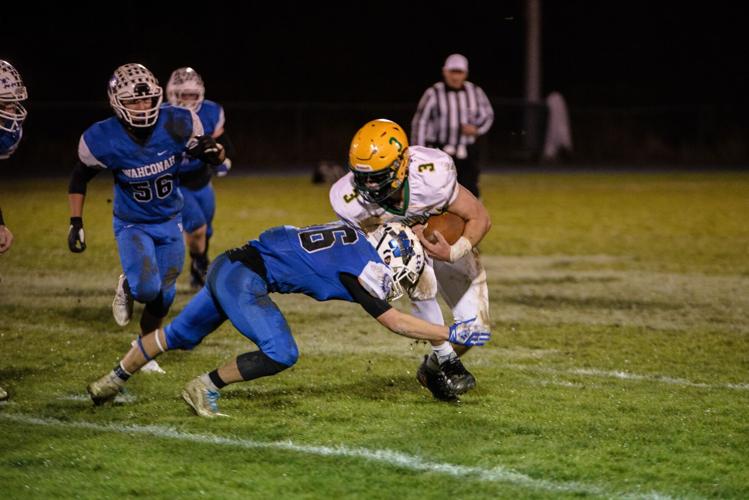 Wahconah's Scott Duma comes up to make a stop against Clinton.

Jonah Smith didn't spend a ton of time on the ground Friday night, rushing for over 300 yards and four touchdowns.

Wahconah's Scott Duma comes up to make a stop against Clinton.

The teams don’t play each other in the regular season. In fact, they haven’t met since 2007. In Berkshire County, when one brings up Northbridge High School, the thought turns to three Super Bowl games the Rams played against Berkshire football powerhouse Wahconah.

Three times Wahconah’s coaches have matched wits against Ken LaChapelle, and three times the Warriors had come up short. There’s no shame in that because LaChapelle coached in his 500th career game when the Rams beat West Boylston back on Sept. 10. LaChapelle is the winningest coach in Massachusetts history, and he became No. 1 back in 2014. Nobody’s been able to catch him, and the Rams have consistently been a road block for Berkshire teams looking to reach Gillette Stadium. Northbridge beat Hoosac Valley in state semifinals in 2013 and 2015, and eliminated Western Massachusetts champion Pittsfield High in 2014.

Current Wahconah coach Gary Campbell Jr. led the Warriors in 2001 and 2002. Matt Morrison, who is now back assisting Campbell, was the head coach in 2007, coming after Campbell had left to take the coaching position at former national champion Berwick (Pa.) High School.

When Wahconah and Northbridge battle Saturday at Holyoke High School, it will be the fourth time these teams have battled for football supremacy. The first three times, the prize was an MIAA Western-Central Massachusetts Super Bowl championship trophy. This year, however, the prize is a berth in the state Division VII championship game at Gillette Stadium in December.

Here now is a look back at those three games.

Dec. 1, 2001, Northbridge 35, Wahconah 17These teams were meeting for the first time with Campbell being a youngster against the veteran LaChapelle. The way the teams played football, Wahconah was the older soul. Campbell’s Warriors were ground-and-pound all day, every day. In fact, running backs Eric Pratt and Sean Regan combined to run for 154 yards that cold December day at Springfield College.

It was the Rams, however, who were the cutting edge offense.

“They looked like the St. Louis Rams,” Wahconah quarterback Robbie Cimini said after the game. “I never thought I’d see anything like that in high school football. I never saw it in college football.”

The Rams of Northbridge ran reverses, throwback pass plays, and even a swinging gate play. It helped Northbridge take a 14-0 lead after one quarter and what proved to be an insurmountable 28-17 lead at halftime.

“The whole idea was to spread the field, do a whole lot of different things and just confuse them,” the Northbridge coach said. “If they control the ball they’re tough on teams.”

One common thread in the first two games was Northbridge quarterback Danny Brown. Brown, a junior in this game, had been starting in the Northbridge offense since he was a freshman. He was 13 of 25 throwing for 164 yards and two touchdowns, and also ran for 101 yards on 14 carries.

Dec. 8, 2002, Northbridge 34, Wahconah 6Brown eventually went to Harvard to play football, but his career was cut short by injuries. On this Saturday at Coughlan Stadium on the Worcester State campus, Brown was healthy and dominant.

He was 15 for 22 for 265 yards and three touchdowns. Jon Zenpuis caught four passes for 111 yards. Wide receiver Adam Mummenthey, who was a standout the previous year, caught two touchdown passes. Tight end Matt Krevis, a monster all day, played his college football at Brown.

“This is the best team I’ve been associated with in 32 years of being at Northbridge,” LaChapelle said.

The Rams rang up 377 yards in total offense and were just as stout on defense, holding the Warriors to 141 yards. The top ball carrier for Campbell’s crew was Josean Sanchez, who ran for 32 yards on six carries. Sanchez is currently a member of Campbell’s coaching staff.

Northbridge jumped out to a 21-0 lead before Sanchez caught a 35-yard touchdown pass from Caleb Mackey to make it 21-6 at intermission. The Warriors did not score again.

“It’s a privilege to play against the best in the state,” Campbell said after the game. “I haven’t seen what’s in the east, but they are the best on this side of [Interstate] 495. The kids now know what the next level is.”

Brown was 34-4 in four years at Northbridge, throwing for 1,500 yards and putting 28 touchdowns on the board. He was also 13th in his class, and had offers from Williams and Amherst, along with Harvard and other Ivies. Had he gone to Williams, Dick Farley might have coached the Ephs to four straight 8-0 seasons.

And one more thing about Brown. When Morrison was coaching the Warriors, the plan was to get brand new helmets for everyone from the youth leagues to the high school team. A deal with Xenith, a helmet manufacturer, was worked out and the Xenith representative was a guy named Danny Brown.

Morrison said he knew a Danny Brown from Northbridge, and the rep said he was that Danny Brown. Small world.

Dec. 1, 2007, Northbridge 17, Wahconah 15The site was Westfield State. The winning team remained the same. The game, however, played out much different than the first two meetings.

The Rams, who played Wahconah for the first time without quarterback Danny Brown and his plethora of weapons, did manage to take a 17-8 lead at halftime. The first touchdown came after Wahconah was stopped on a fourth-and-2 from its 43-yard line. The second TD came after a bad punt snap and Northbridge recovered on the Wahconah 14. A field goal in the final seconds accounted for the 17 Northbridge points.

Northbridge quarterback Zach Zidelis had thrown for 2,000 yards that season, but was held to 108 in the game. Wahconah quarterback Julian Schnopp threw for 104 yards.

At the time, and again more than a decade later, coach Morrison credited defensive coordinator Jim Galliher and assistant Chris O’Connor with the defensive game plan.

“We put together a game plan, stuck with it and the majority of it worked,” Morrison said after the game.

But after cutting the lead to 17-15, Northbridge ran a 15-play drive that ate up seven minutes. Eleven of those plays were runs.

“We’re just not used to that,” Zidelis said after the game. “We’re used to airing it out and trick stuff. It comes down to that when you need to win, you do what you need to do.”

Trevor Marcotte ran for 95 yards for the Warriors, who gave the Rams all they could handle.

“Part of our legacy is to be the best we can be,” Wahconah lineman Evan Persson said. “We were the best we could be, but it wasn’t enough.”