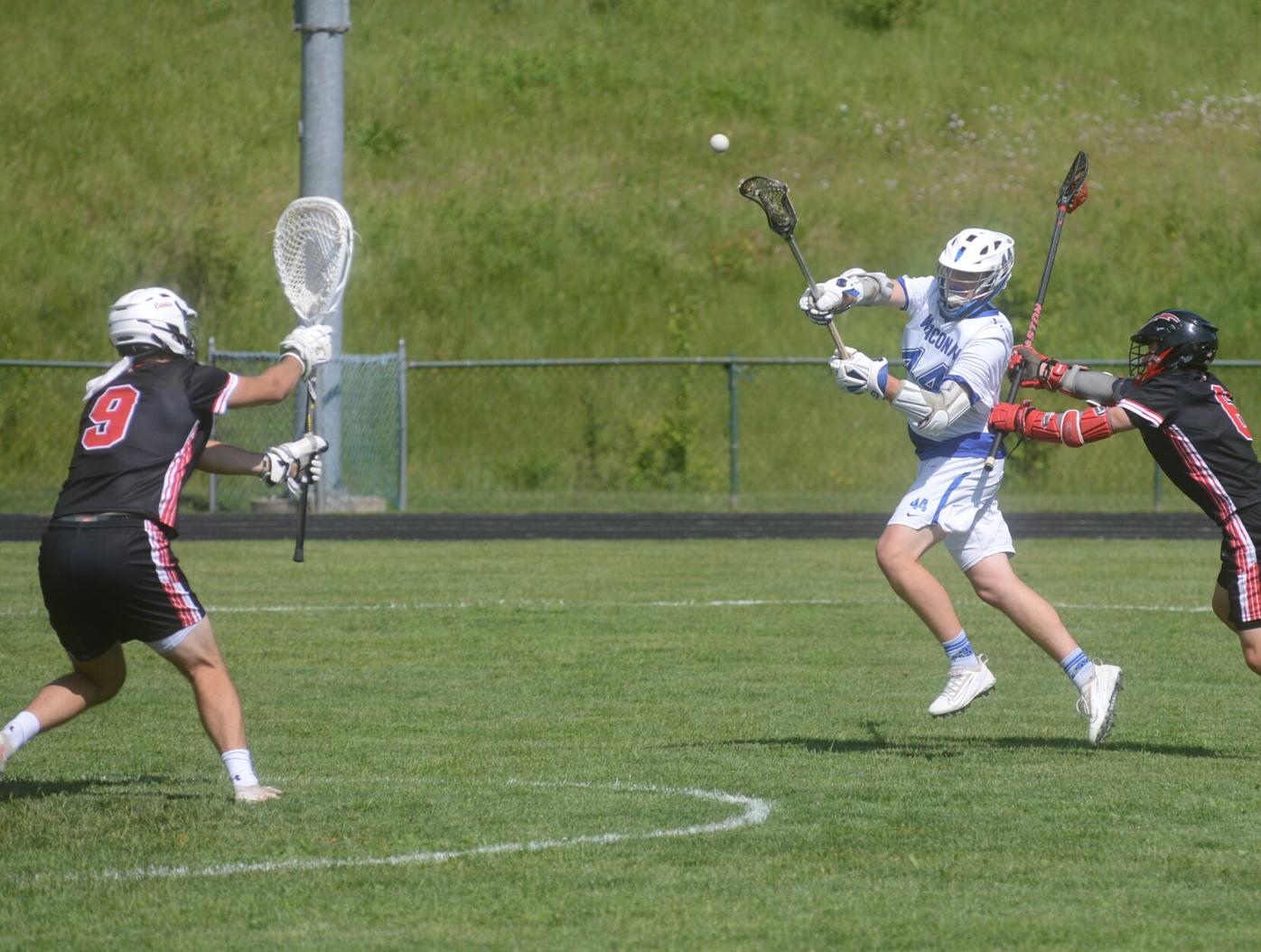 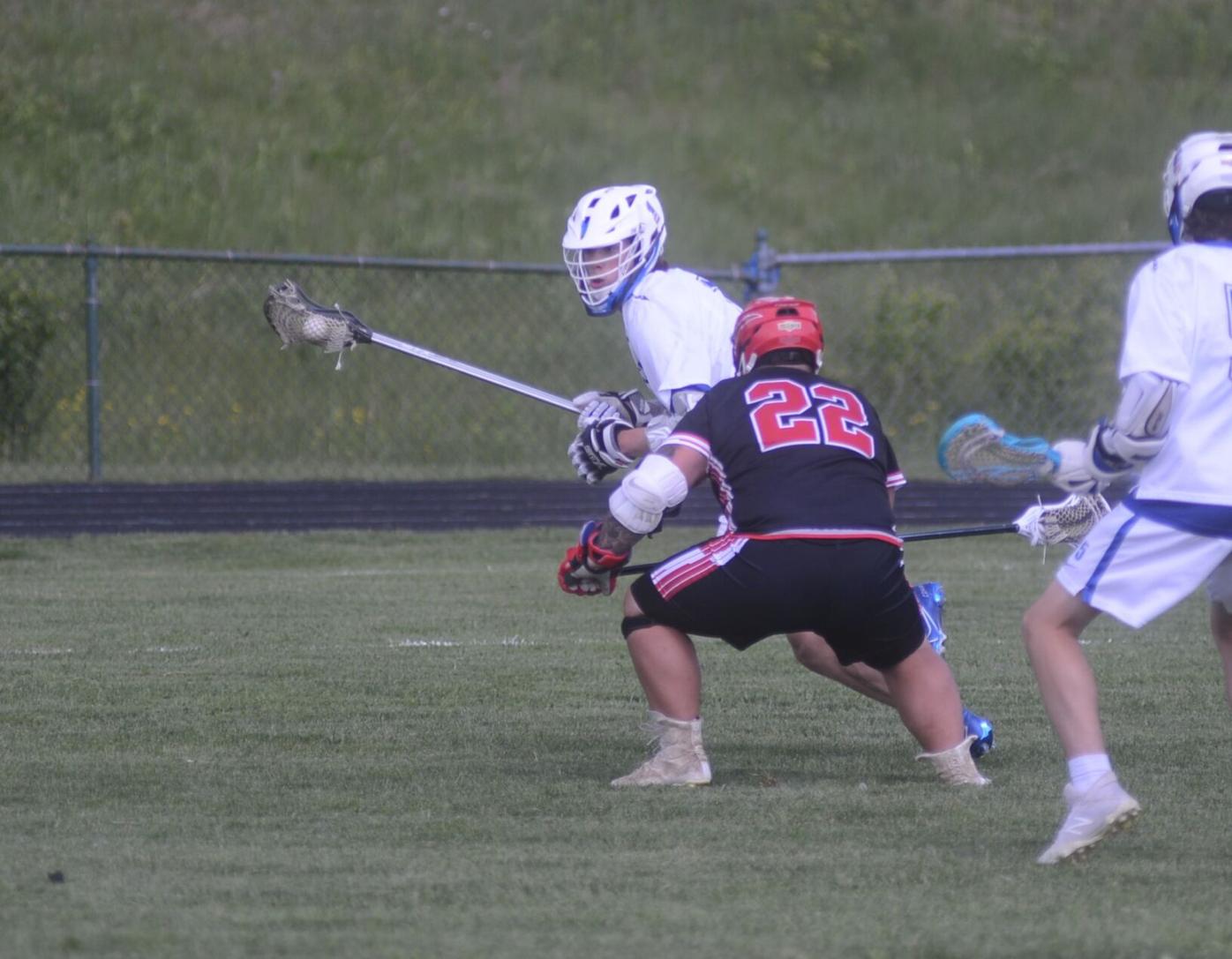 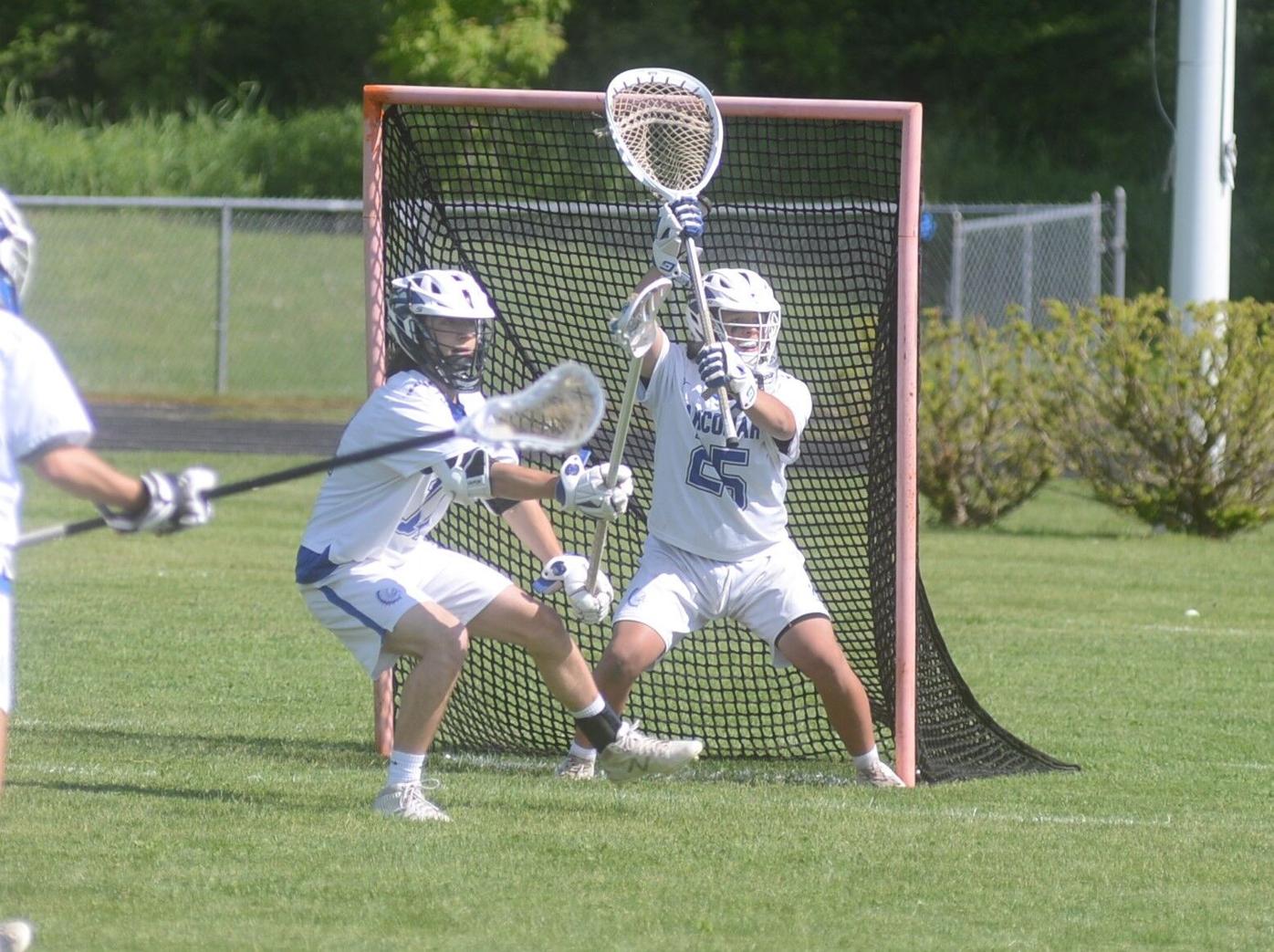 Wahconah keeper Joe Massaro, along with a defenseman, protect the net in Tuesday's home game against Hoosac Valley. Massaro ended the night with five saves and allowed just two goals.

Wahconah keeper Joe Massaro, along with a defenseman, protect the net in Tuesday's home game against Hoosac Valley. Massaro ended the night with five saves and allowed just two goals.

DALTON — Tuesday was the fourth time this spring that the Wahconah boys lacrosse team eclipsed 18 goals in a game, but defense is what caught the eye of third-year coach Joe O’Neill.

The undefeated Warriors ran away from Hoosac Valley with a 19-3 victory, matching their season low for goals allowed in a game.

“This was the best game they had,” O’Neill said of his team’s defense. “We’ve been working on some stuff, they definitely stepped up today and couldn’t be happier with them.”

The Hoosac Valley offense couldn’t get much going against Wahconah’s stout defense and the Hurricanes didn’t get a shot off until the 5-minute, 23-second mark in the first quarter.

Some clean clears by defensemen led to transition goals as the Warriors led 7-0 at the end of the first quarter.

“We always say that the ball goes faster than our legs do,” said Wahconah attacker Caden Padelford. “Every time we can get fast clears and have good ball movement it opens up a lot of opportunities for us.”

Padelford made the most of his opportunities, matching teammate Ernie Lampron with a game-high five goals. Padelford, along with fellow attacker Billy O’Neil, created their fair share of opportunities with three assists each.

“Our offense moved the ball great and we had some good cutters out there,” Padelford said. “We just have to keep up what we’ve been working on this entire season.”

Hoosac Valley worked to slow the game’s pace in the second quarter, leading to goals by Nate Haley and Luke Waterman early in the frame. Haley finished the day with two goals for the Hurricanes.

Leading 7-2, the Warriors tacked on their eighth goal at the 3:49 mark in the second quarter and sprinkled on two more goals to take a 10-2 lead into the half. The Hurricanes stormed down the field with time expiring, but Wahconah goalie Joe Massaro made a strong save on a shot headed for the back of the net. Massaro closed his performance with five saves on the afternoon.

“As our keeper, the kid works his tail off,” O’Neill said .

Nick Astore scored on two of his three shots. Devin Lampron found the back of the net twice and assisted on two goals. Billy O’Neill, Jonah Smith, Logan Newson, Rylan Padelford and Trey Massaro each added a goal for the Warriors. Wahconah outscored Hoosac Valley 9-1 in the second half.

The 2021 lacrosse season began two weeks ago on May 14, but the Warriors have just three games remaining on the regular season schedule.

Wahconah will host Hoosac Valley again on Thursday and travel to Mount Greylock on Friday before ending the regular season at home against Pittsfield on June 8.

The Warriors have outscored opponents by nearly 15 goals per game, a trend the crew from Dalton will hope to keep up with the Western Massachusetts tournament right around the corner.

“We’ve had the same goal all season,” Padelford said. “[Our focus] is to win Western Mass. and we’re going to keep at it.”