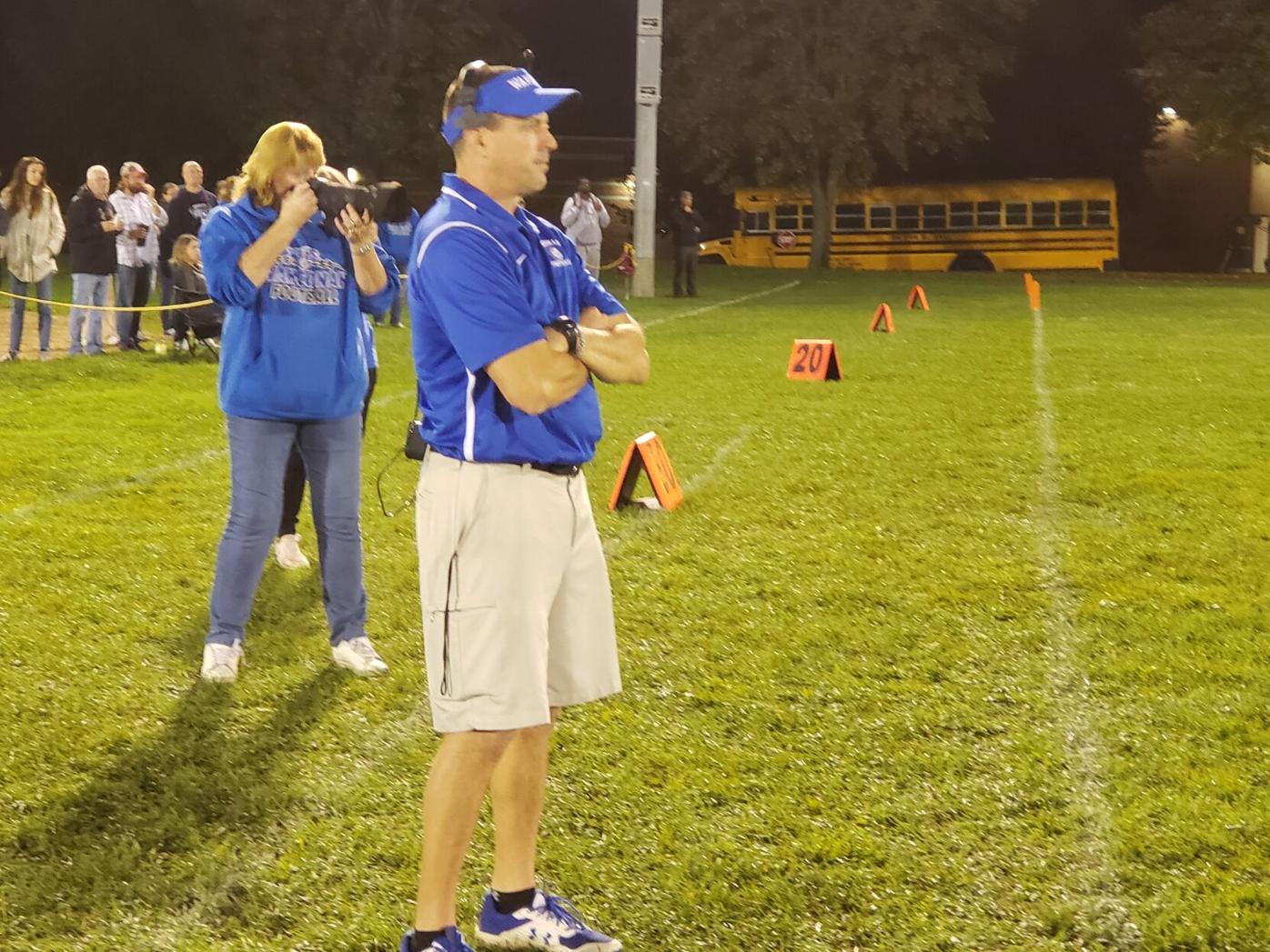 Coach Gary Campbell Jr. has his Wahconah football team at 6-0 after a blowout win on the road at Amherst Friday night. 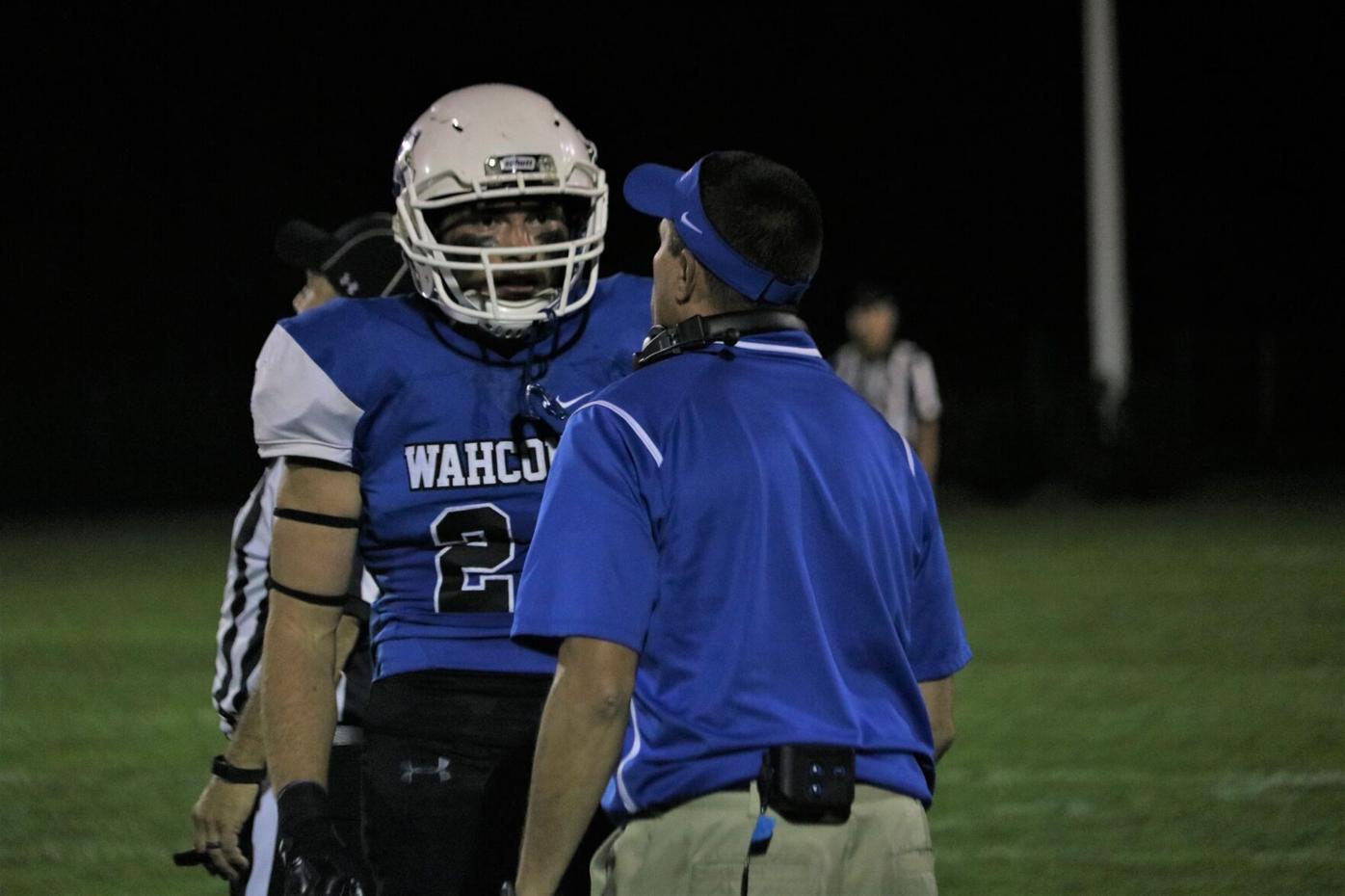 Coach Gary Campbell Jr. has his Wahconah football team at 6-0 after a blowout win on the road at Amherst Friday night.

AMHERST — If every high school football game is a test, then on Friday night, Wahconah passed with flying colors.

"When [Amherst] stuffed the middle and did some things, I'm really happy that we have answers," Wahconah coach Gary Campbell Jr. said, after Wahconah beat the Hurricanes 43-8, in a Suburban South game Friday night. "Ryan Scott definitely had some answers."

Scott, the senior quarterback had an extraordinarily efficient night for Wahconah. He was 15 for 18 for 204 yards and five touchdowns. Scott threw completions to six different receivers, and a couple of balls were dropped or he might have been close to pitching 1.000.

"They blitzed a lot," Scott said, "so we had a lot of open passes. The O-Line held up great, so the passes were wide open and my receivers did a great job of getting open."

None as much as tight end Ben Noyes, who caught five passes for 61 yards, scoring on catches of 16, 8 and 2 yards. Scott also threw a 4-yard TD pass to Luke DiCicco and a 50-yarder to Owen Salvatore, accounting for the last of Wahconah's 43 points.

Ben Notes catches a 16 yard TD pass from Ryan Scott. The conversion made it 14-0 in the first quarter. pic.twitter.com/XSu2BIXFTS

"We work out together in the spring and the fall, winter," said Noyes. "We run routes up at Wahconah. We're always together."

Wahconah, now 6-0 and 3-0 in the Suburban South, was facing a winless Amherst team but one that in 2019 had made it to Gillette Stadium in the Division V championship game.

"We definitely" made a statement, said Scott. "I think we could have played better, but a win is a win, and on to next week."

The Hurricanes started the game on their 5-yard line and got as far as the Wahconah 20. On third-and-7, sophomore quarterback Jameson Dion threw incomplete to freshman receiver Tre Bowman, forcing a punt.

Wahconah took over on the Amherst 40 and needed to convert a third-and-6 when Jonah Smith rambled for 6 yards and a first down. On the next play, Scott ran a sprint out to the left and threw to Noyes, who crossed the middle of the field. The 15-yard gain put the ball on the Amherst 15. Two plays later, Smith ran through a pretty big hole and took it 7 yards into the end zone for the touchdown. Wahconah did not make the two-point conversion, but led 6-0 with 7 minutes, 5 seconds left in the first quarter.

One thing you don't want to give Wahconah is a big break. But that is exactly what happened on Amherst's next series.

The Hurricanes stalled out on their 40 and were forced to punt. A horrible snap to punter Nathaniel Oliver sailed behind him, and instead of getting a kick blocked for a possible score, he downed the ball on the Hurricane 25.

Three plays after the bad snap, the Warriors scored. Scott got under center with a "heavy" backfield for what looked like a run. Instead, Noyes got wide open behind the front seven, caught the pass and easily rambled into the end zone for the 16-yard touchdown play. This time, Smith got the handoff and scored on the conversion, making it 14-0.

Wahconah ended up having the ball four times in the first half and scored on all four possessions. The Warriors led 28-0.

"They're a really well-coached team," Amherst coach Michael Dublin said of Wahconah. "They always have been. They do what they do very efficiently and well. They're not going to make mistakes."

Wahconah took the third-quarter kickoff, and a stop by the Amherst defense might have done wonders for the Hurricanes. Wahconah recovered the squib kick on its 42, as DiCicco fell on the bouncing ball. Ten plays later, Wahconah scored a back-breaking touchdown.

Luke DiCicco catches this 4 yard pass from Ryan Scott late in the second quarter. It put Wahconah up 28-0. pic.twitter.com/AztRyh1u6A

The Warriors converted a fourth-down play with a 13-yard pass from Scott to Owen Alfonso. On the next play, Noyes got behind defensive backs Jovahny Govan and Dion on a 20-yard catch-and-run for the touchdown.

Wahconah got its final score when Salvatore got loose down the right sideline, ran under a rainbow pass, and went 50 yards for the touchdown. It was the longest play from scrimmage on the night, and Amherst's Bowman couldn't do anything but watch Salvatore take it to the house.

There are two weeks remaining in the regular season, and Wahconah will get to close out the regular campaign with home games against Northampton on Friday and West Springfield the next week.

"Now, every game matters," said Campbell. "We have a trophy game next week with Northampton, the Route 9 Rumble and we're opening the new school, so that's a big deal. That's a real big deal and will weigh on the kids a little bit. Then, what's become our rival, West Springfield has become a rivalry, and then you go into the playoffs.

"From now on, it's ready to play real football."

Berkshire County High School Football, Week 7: Undefeated Wahconah, Lee vs. Hoosac and PHS vs. THS — it doesn't get much better than this

The leaves are changing colors, the sun is setting earlier and as a 27-year Berkshire County resident — I still have no idea how to dress for …